Jamis have been putting together the Aurora for as long as I can remember, making small refinements year by year to offer a competitive option in the bicycle touring market. In the early-2000s the Aurora was marketed as a ‘versatile road machine’; a steel road bike with cantilever brakes and a wide range of gears. These days the bike is much more touring-specific with fitted fenders, barend shifters and a rear rack as standard.

The 2016 Jamis Aurora frames are both made out of Reynolds steel, but in two different qualities depending on your budget. The advantage of the higher-quality Reynolds 631 tube set is a matter of weight; I don’t expect that the 631 frame will ride all that differently to the Reynolds 520 bike when loaded with bags.

The frame geometry of the Aurora is quite well suited to touring, although it’s figures tend to align closer to a ‘cyclocross’ bike (in-depth geometry differences HERE). The bike has a moderate fork trail of 64mm (learn what that means HERE) resulting in a slowish steering response, keeping heavy loads stable on fast descents. The bottom bracket is up to 13mm higher than other touring options, offering more pedal-to-ground clearance but a slightly higher centre of gravity. The chainstay length comes up a bit short at 440mm, so riders with large feet may need to be careful with rear rack selection, making sure their heels can clear their panniers.

The 2016 Jamis Aurora Elite offers a higher-quality steel frameset, using Reynolds 631 as the main tubes, as well as some neat forged rear dropouts with a few more eyelets. Another big difference that separates the Elite from the standard model is the use of disc brakes. I’m a huge fan of disc brakes for a number of reasons, and the TRP HYRD cable disc brakes are some of the best around. The smallest gear is 30-32t which is not small by bicycle touring standards, but will get you over most hills. The road-triple crankset with external bottom bracket bearings is a nice touch, I’ve done over 20,000km problem-free on mine. The full metal fenders offer exceptional coverage and are a nice way to finish off this bike.

The recommended retail price is US $1600 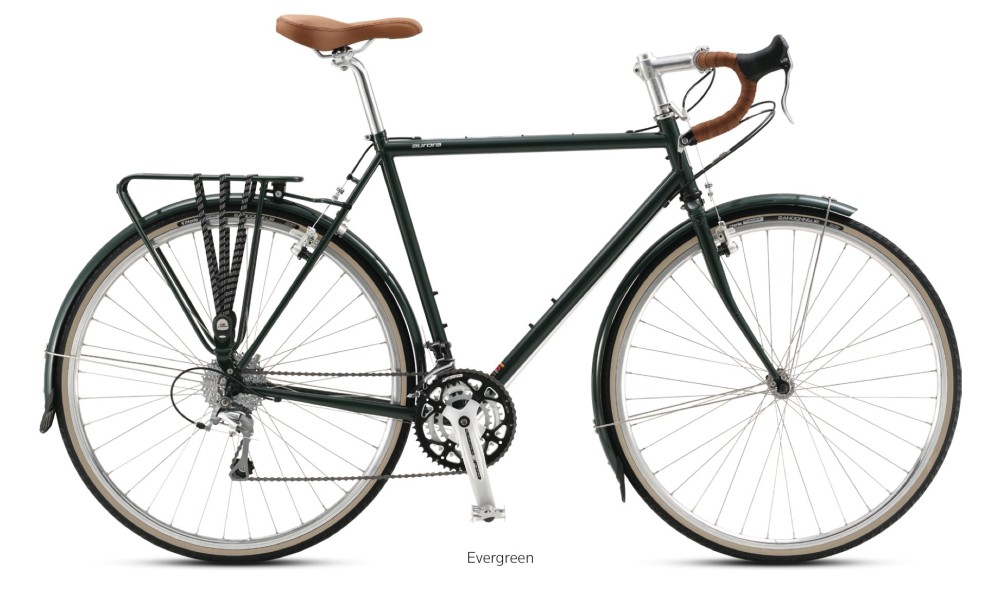 The advantages of the standard 2016 Jamis Aurora are a lower price, a wider gear range and a 9-speed drivetrain (generally more spares available). The motto of this bike really is simplicity: it’s got all the ‘classic’ touring features including barend shifters, canti brakes, a square taper bottom bracket and a 9-speed drivetrain. This model actually has a wider gear range, offering 26-32t as the smallest gear – generally considered low enough to get you up any hill. Again, the full metal fenders offer exceptional coverage and are a nice way to finish off this bike.

The recommended retail price is US $1100