Australian-brand Curve Cycling have a slightly different approach to most bike companies. All of the R&D is completed in-house by the three business owners, who double as avid cyclists after hours. But here’s the thing; their field research is as demanding as it comes.

Their carbon fibre wheels were developed using the Tour Divide, a 4500km non-stop mountain bike race from Canada to Mexico. The Curve Belgie road bike has been raced to success twice on the 6800km Trans America Bike Race. The Curve Grovel V1 adventure frameset was developed using the Paris-Brest-Paris, Japan Odyssey and various long-distance bike tours to make sure the geometry and frame details were just right. The Curve GMX adventure bike will be tested properly in a month on the inaugural Race to the Rock in Central Australia.

It’s safe to say that Curve know a thing or two about what works and what doesn’t for touring and endurance racing.

The 2017 Curve Grovel V2 is designed with a bit of everything in mind. Want to do a cyclocross race, a bike tour, commuting and an off-road gravel ride all on the one bike? Well, with a few part changes, the Grovel V2 will accomplish everything with panache! 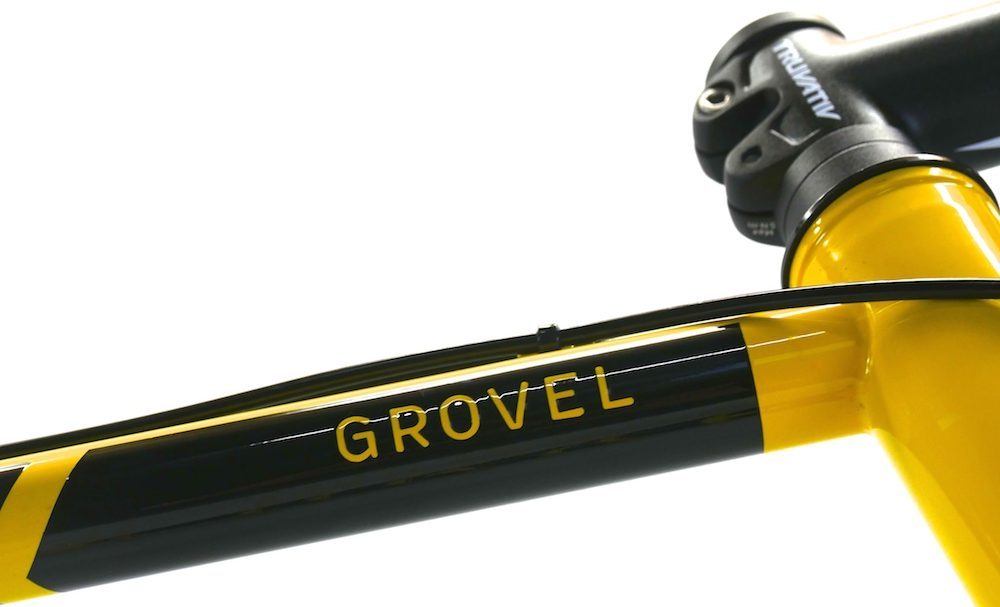 The geometry of the Grovel V2 is quite similar to other light touring bikes like the Specialized Sequoia, Kona Rove and Trek 720. It’s essentially a modified cyclocross geometry with a longer wheelbase, taller front end and lower bottom bracket. This allows to bike to ride with stability, albeit with the loss of some twitchiness. It’s designed with a tall front end for all-day comfort. 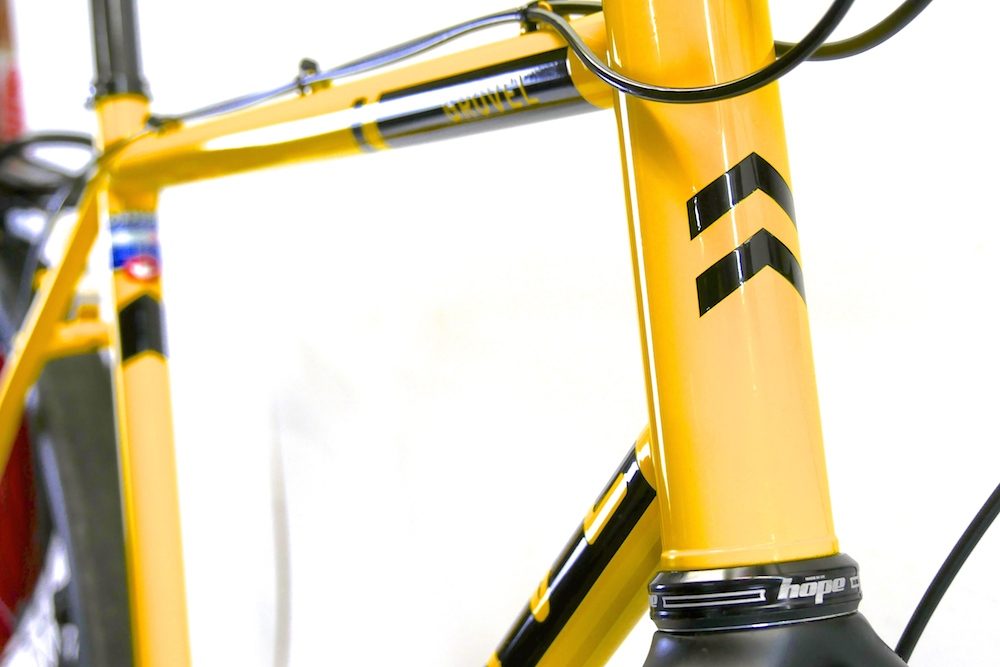 The double chevron is used for the Curve Cycling branding on both their frames and wheels.

The Curve Grovel V2 is constructed using double-butted Columbus Zona tubing. This steel tubing is relatively high-end with a moderate weight attached, and tends to offer good dent resistance compared to more aggressively butted, thinner steel tubes. The cable guides are all external, making cable changes easy on the Grovel V2. The cable routing has been strategically located along the top tube and down the seat stays to keep the cables away from the elements. 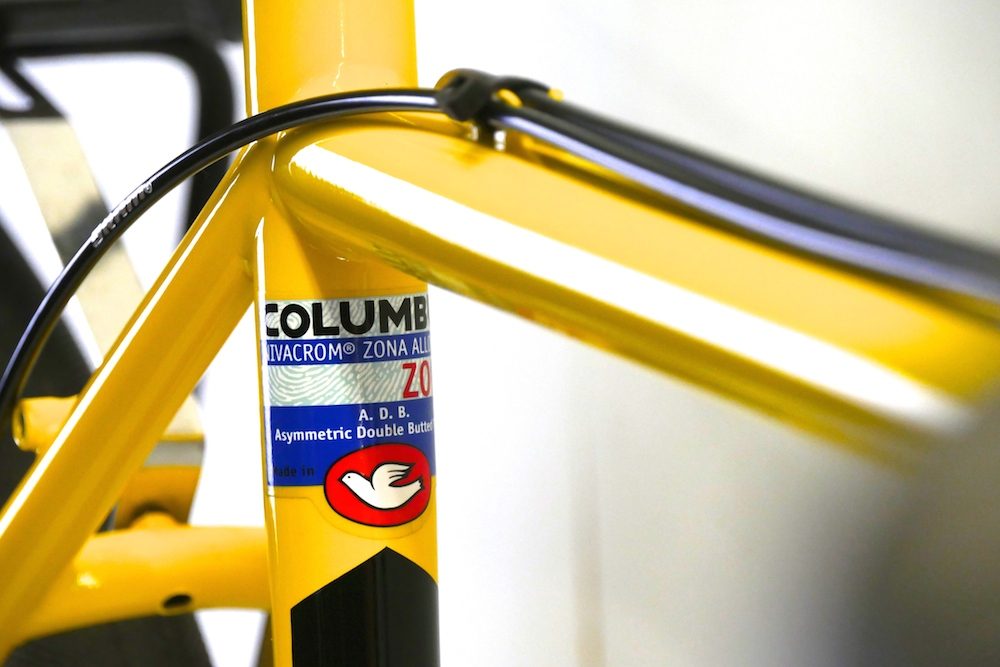 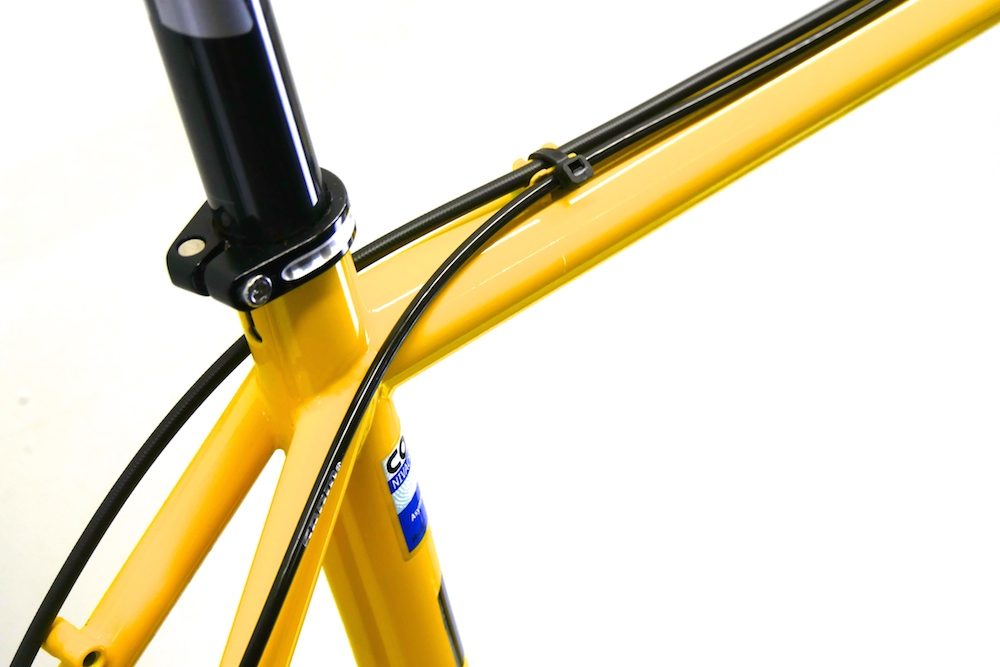 The cables on the Curve Grovel V2 are kept high and dry.

The frame has space for 3-boss cargo cages (2) and a standard bidon cage (1). This adds great versatility to the bike by making water and gear easier to carry. I particularly like the star decoration around each frame braze-on. 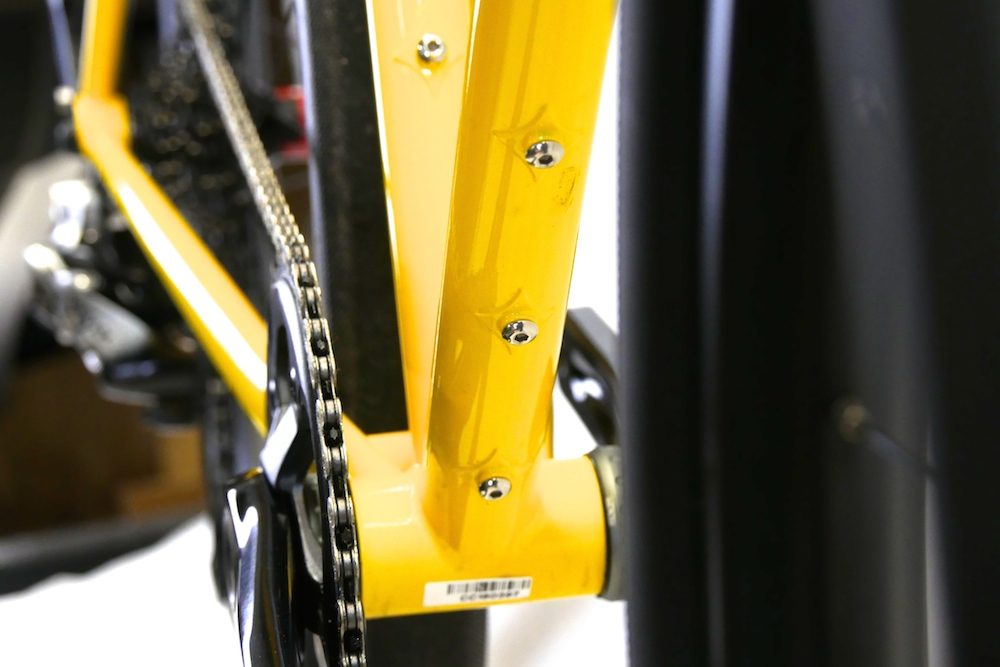 This custom Curve Grovel V2 is built with 27.5 x 2.00″ tyres, but it’s expected that most buyers will probably opt for the 700x40c setup. The widest permissible sizes for both wheel sizes are 27.5 x 2.1″ and 700x42c. The larger air volume of the wider but smaller 27.5 wheels will be better suited to rough dirt roads, while the narrower 700c option will be quicker on smoother surfaces. 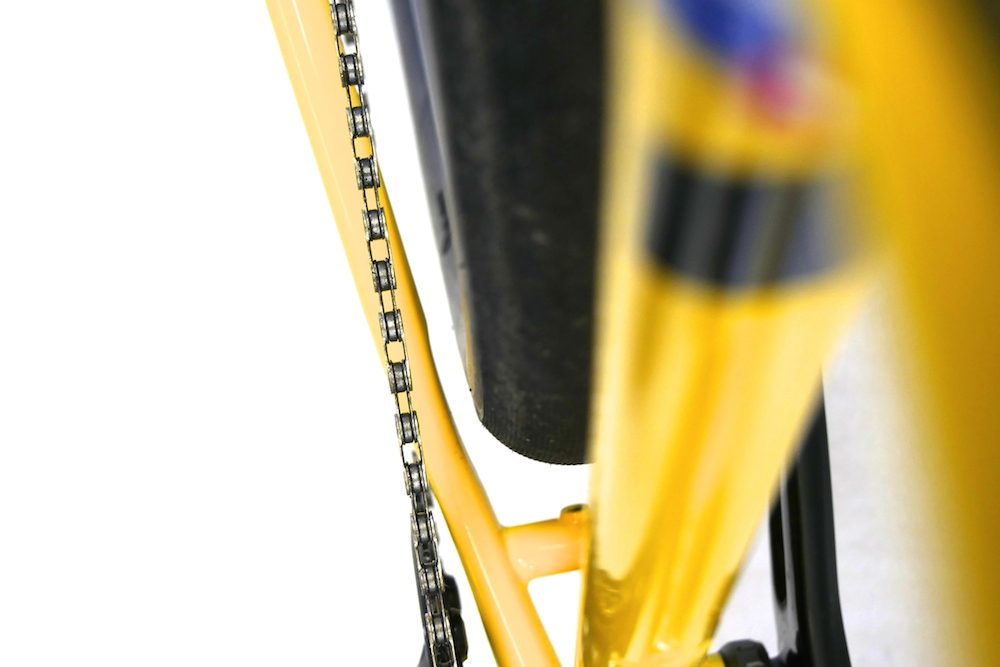 The Curve Grovel carbon fork is designed with a 3kg / 7lbs load in mind (via a front porteur rack). Tabs on fork legs permit fender mounting, while a drilled crown allows for a dynamo light or porteur rack. This 510g carbon fork is ultra-lightweight given its capabilities! 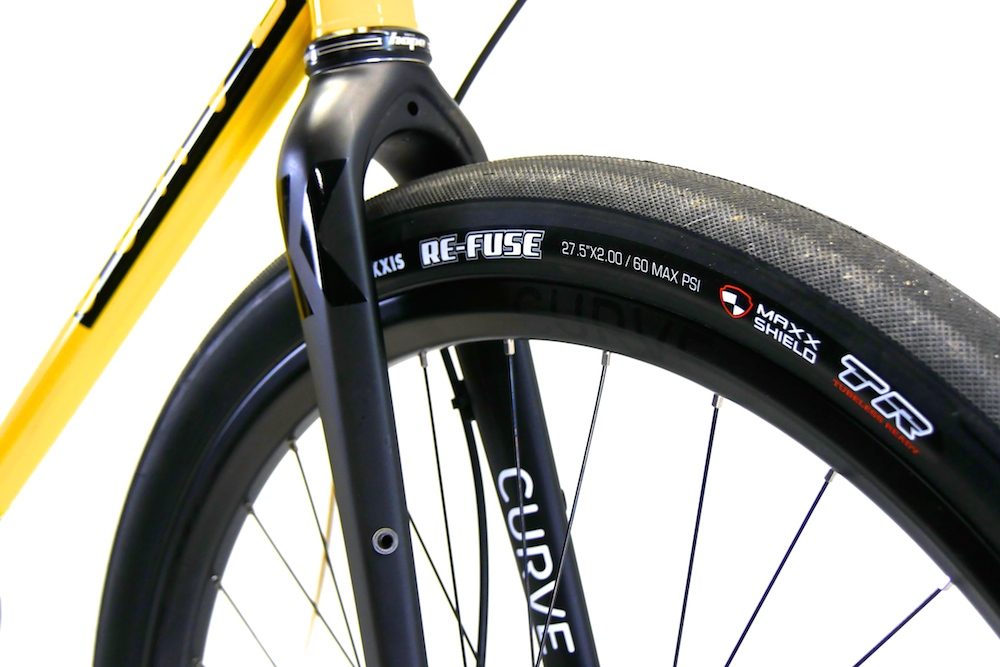 Rear eyelets are found at the dropout to fit both fenders and racks. There’s fender mounting at the chainstay and seatstay bridges too so that you can keep yourself dry with full-length fenders (essential on a touring bike). 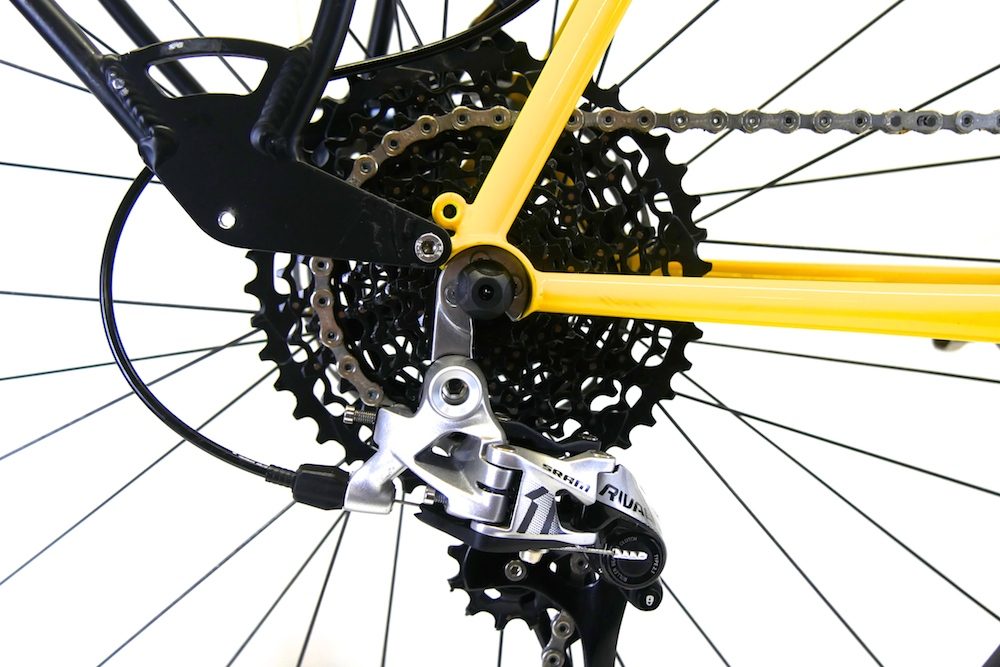 Lots of braze-ons at the dropouts of the Curve Grovel V2 frame.

Curve Cycling don’t offer the 2017 Curve Grovel V2 as a complete bike yet, however they will gladly piece together a custom bike for you.

The Grovel V2 frame is currently on pre-order in either black or yellow via the Curve Cycling website, and will ship in September/October 2016. With the pre-orders they are offering FREE WORLDWIDE SHIPPING and will also throw in a Grovel tee and Curve Cycling cap.

You’ll need to put down a 33% deposit to secure one (around US $249). The Grovel carbon fork adds US $370 to your order, payable when the frame is ready to ship. 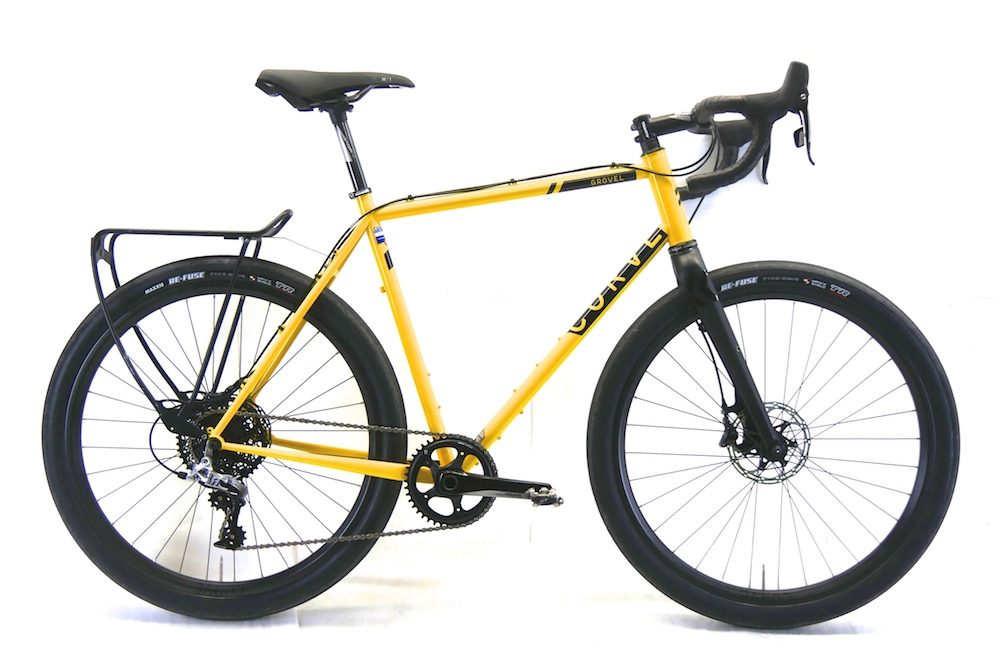