The view from Rozafa fortress, Shkodra.

In Shkodra, after having travelled as the Alleykat member of two different Bike Gangs for the past week and a half or more, we had just spent our first night alone on the Mediterranean coast. We left the small but bustlingly busy city – our faces lit by glaring spirits and bright sunshine. After a morning of tandem tape measuring and saying goodbye to our new Albanian friend Ardisa (she ran the front desk of our Hotel), we traced the same thirty five kilometres our new buddies from Austin and Boston, Travis and Jordy, had ridden the day before. Luckily we weren’t entirely following their wet footspins as they had ridden determinedly into the strong headwind with their bikes awash with lashings of Albanian rain.

Travis, Jordy and Alex – the latest boyband (there’s a challenge to name them and their first album on FaceBook!)

Along this road we were cheered on by the weather and egged on and on and on by the majority of the drivers and pedestrians we mingled amongst. There hasn’t been anything like it on our trip so far; people go out of their way to make us feel welcome and seem genuinely excited to have us visit their country.

We had almost finished the first short leg of our day when we were struck by a very strange sight: a show-stopping bright green tractor hitched up to a caravan just parked casually on the side of the road. We had to stop. Our friend of three Kotor-flavoured Montenegrin days, Beatrice the biker from Bordeaux, had told us about this bloke and his wacky set up seemingly only moments before and here he was! The driver waved us in, a Frenchman named Claudio (“just Claude, please”). 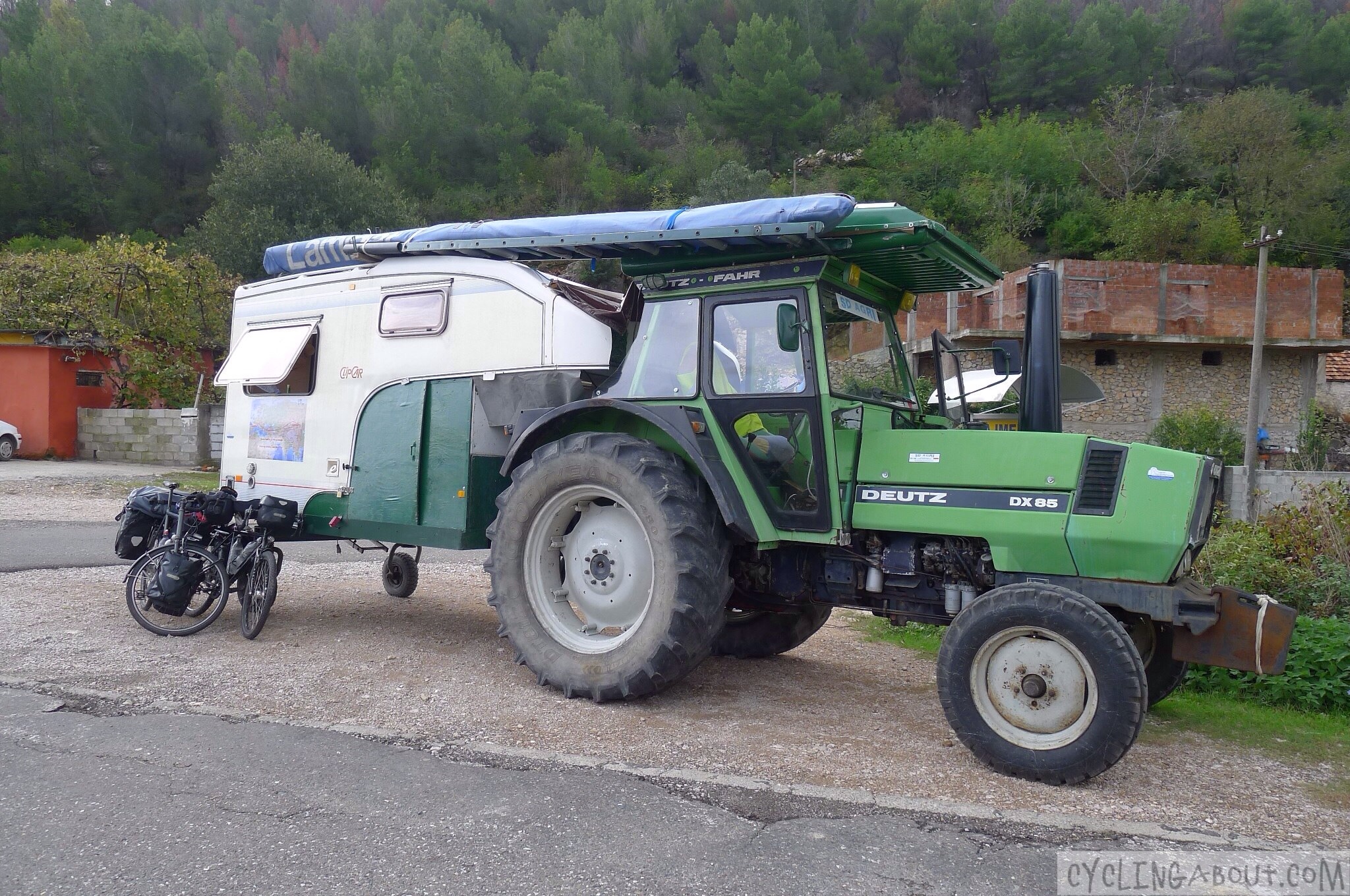 We conversed in a gesticular mixture of English and French about our trips and our lives. He travels ten or twenty kilometres a day at a speed less than twenty kilometres an hour and is on the road from Bordeaux, France to Ulaan Batar, Mongolia. He carries a cacophony of complementary devices to his tractor-based lifestyle – a motorbike sits cocooned in a self-made section of the caravan, two bikes and a hang-glider are strapped to the roof and his machine-home comes equipped to sleep up to four people at any time. He carries 250 litres of water, 300 litres of fuel and a whole lot of stories and enthusiasm for his chosen slow-living lifestyle. Alex and Claude drank a beer and I enjoyed a refreshing home made lemonade. A passing Albanian man took photo after photo of us from the window of his car. Another man smiled from the side of the road and gave us a wave. Yet another Albanian man took photos for us with both our cameras. After hearty wishings of ‘good luck’ and ‘bon voyage’ and promises of photo sharing, we hopped back on out bikes and trundled off down the winding road. 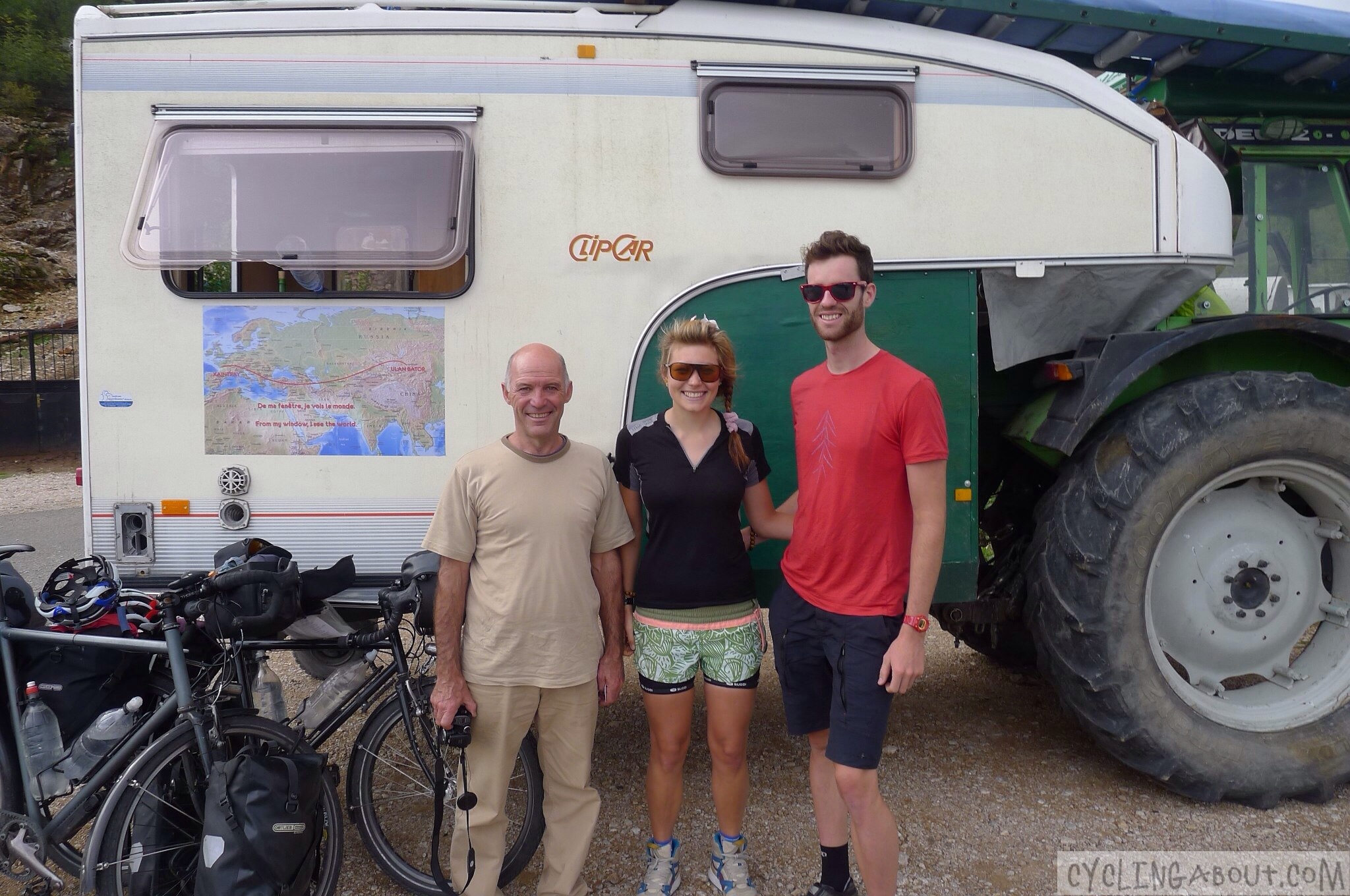 We arrived in Lezhë with practical plans to pick up a spot of lunch. Instead, we picked up four practically spotless French friends and within minutes decided to ride altogether. This decision was made possible by the fact that the four French lads are bike adventurers too! They’re doing a slightly different world fundraising trip where just one leg is to be cycled and the others are planned for more traditional modes of transport. Their charity isn’t Oxfam but instead is a foundation they created themselves, the Children’s Heart Nation. They’re champions: riding bikes and raising funds – good enough for Alleykat any day! We set of as a troop of six brightly coloured and colourfully obvious bike riders, laden with various bags and stories to boot. 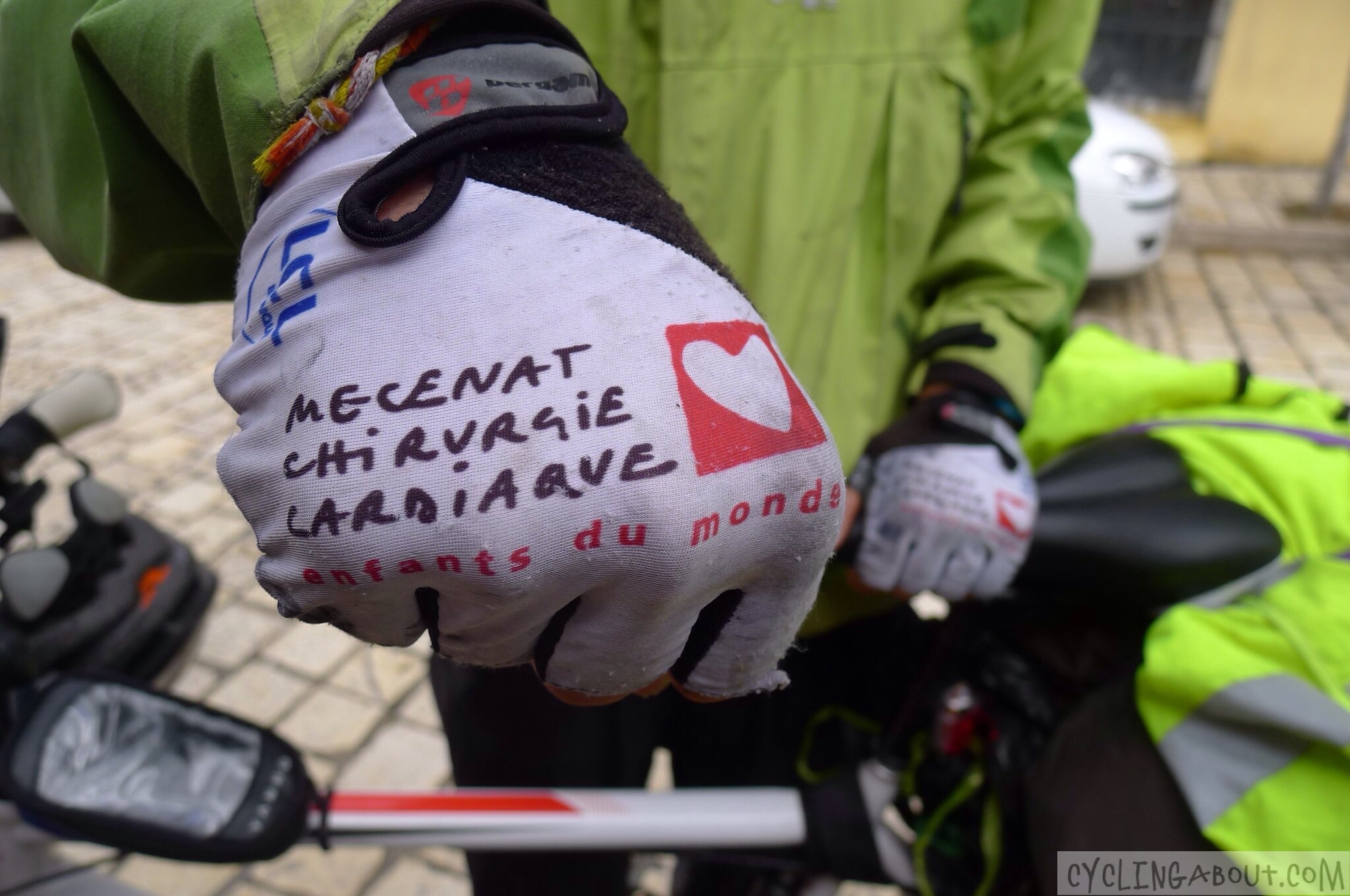 Don’t worry! Rémi won’t punch you in the face, he just wants you to know Children’s Heart Nation is on Facebook!

As we rode along a rather narrow road in bad need of resurfacing – the main road out of Lezhë – we were supported by every man and his dog. I was smacked on the bum by a number of very young “bike enthusiasts” and just like that, we were on our way. Despite the dispiritingly dodgy road initially, soon we were riding on an enormously wide Albanian highway, the SH1, with an entire lane to ourselves and countless beeps, waves, cheers and general well wishes to keep us riding. The French boys are already thoroughly accustomed to Albanian generosity even though they, like us, have only been here a short smattering of days. A day or two prior to meeting us they had stopped at the side of a typically Albanian road (with big potholes and close traffic to ensure you’re on your best game) to ask a gentleman for some water and instead, they were given bags of mandarins and invited inside his house. We had read of the proported kindness, enthusiasm and generosity of Albanians but until we began experiencing it, we didn’t realise the full extent of it. These men and women are so ready to help and offer more than the basics of nourishment – they supply travellers with fairly instant friendship and a wealth of information (mostly in very good English).

After riding for another thirty-five kilometres there was a general consensus that finding a place to stay, hopefully a wild camp equipped with a river to fish in, was a good idea before the four-thirty afternoon deadline of darkness interrupted our ride. We hopped off the highway and legged a lefty towards a mountain range some kilometres inland. Along this little road we found a number of markets where the Frenchmen bought foil and fire cooking ingredients and ended up with directions to a river and a body of water further afield. We rode and chatted and rode and chatted, learning more about their trip and fundraising efforts and of course, incidentally about them. We rode past a small dwelling (a bar as it turned out) on the fringe of a small town where three boys hooted and waved at us. After a few more hundred metres a lake was sighted and a path of sorts was negotiated by three of our party. Alleykat and French Paul stayed at the top and were accosted by these same three Albanian young men we’d just passed. They asked about us and what we could possibly be doing wheeling our bikes down a four wheel drive path? We established through interpretation by Geraldino, an apt English-speaker, that they were the family of families who owned a couple of stand-alone bars along the small ridge line we were riding. They invited us for a beer later and we invited them for a possible fire later.

The French Australian troop end up pitching camp next to the lake in Koder-Thumenë, enjoying the beautiful cloudy sunset as we did so. Moments after the first tent was opened the three young Albanian men were footprinting their way through the muddy scrub we’d dragged our heavy bikes along and were calling out to us. These three were soon joined by four more men of their respective families: cousins and brothers and friends, and soon we had quite a little party set up. The Frenchmen brought out some international currency in the form of beers and cigarettes (neither of which was participated in by Kitty J here, but beers are always welcome to those who enjoy them, such as Alex2000). An uncle of one of the boys came down a little while later and expertly built a fire and then nicked off again – he has another family to take care of too! We learned about these men and their families, many of them are studying to become engineers and to get a good education to perhaps leave Albania and make more money. They stayed with us well into the night, laughing and talking with each of us, leading a few up to an uncle’s or cousin’s bar to use the toilets and get water to cook with, heckling our stories and jokes like any old friend would do, asking us about our home lives and answering our questions about theirs. We learned about football, marriage and fishing with dynamite, we were taught about Skanderbeg and Krujer and we gathered a new understanding of what post-communism feels like. We were amazed by their constant flow of boyish chatter and they were surprised at our contentedness in silence. 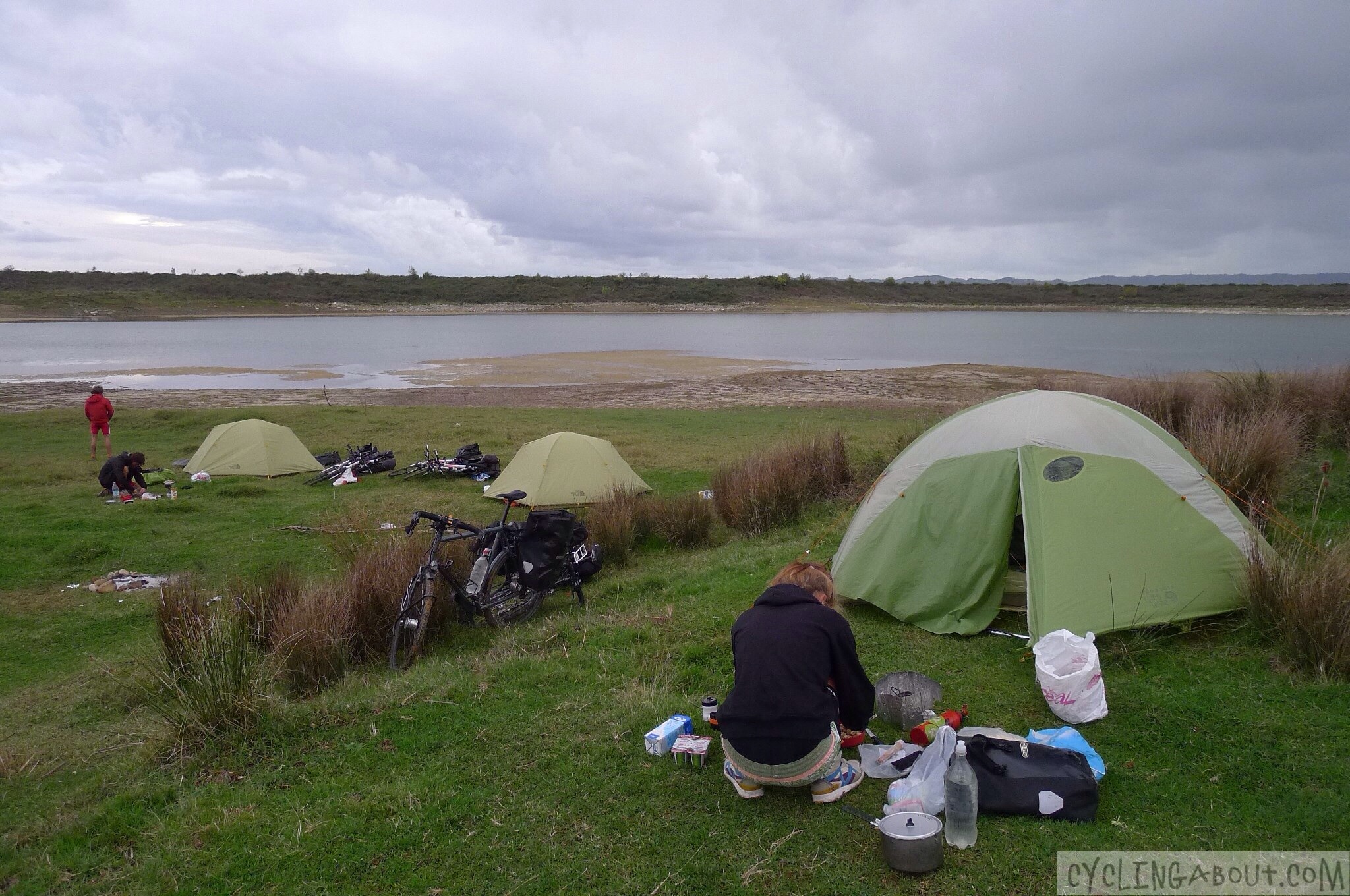 Just before it rained goats and sheep!

The stand out of the crowd for me was the youngest member of the group, Arbor. He was thirteen and was plucky, personable and polite. His English was jaw-droppingly good, he’d taken a one year course at a language school and had already learned above and beyond the basics. He had many of the nuances and idioms of English down – it didn’t seem to matter that Alleykat spoke in Australian and the Frenchmen spoke in their beautifully affected French manner – he understood and held his own. He was something else, he obviously wanted to be like his older brothers and cousins and friends, emulating their stance, jokes and spitting, but he also came across as kind and engaged in life, a true gem. He, in his youthful wisdom, was most often our teacher: explaining things like religion – instead of Atheism which was officially imposed under communism, what has stayed true of supposedly secular post-communist Albania is that its people are free to practise and believe whichever Religion without fear of persecution. He told us that religion is a fact of life for Albanians, but it didn’t stop friends being friends or family accepting differing views. Indeed, we were hanging out with five or six Muslims, one Christian and an Orthodox Catholic (in addition to six French/Aussie atheists/agnostics). Young Arbor also fostered lots of talk of the future. He dreams of truly being something when he grows up – an engineer or an architect “like Alex”, he ventured (Alex has given up trying to explain what a town planner is for now) or better yet he mused, a medical doctor because then he could help people and make money. His bedside manner alone would surely get him a job(!) but I wholeheartedly expect him to achieve anything he desires. What a guy. 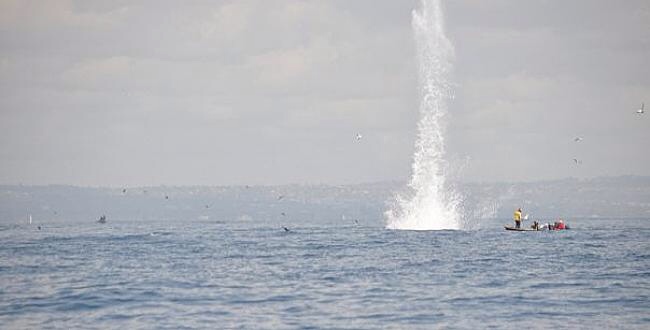 The next morning the Albanian heavens opened on us and we were soaked as we packed up tents and bikes. The wet weather didn’t dampen our sixsome spirits, nor did it deter a kind Albanian youth from coming to our aid: we were helped with our bags and led up the path of least resistance (there was a lot of mud and newly sprung waterfalls to negotiate). He waved us off into the rainy distance. We biked up and up to Krujë, a beautiful mountain town recommended to us by Ardisa from Shkodra and ‘the boys’ from the lake. It was here the French fellows left us, needing to cover more distance due to their time restrictions (much the same as the other Bike Gang members we’ve had the recent pleasure of travelling with: Gabe and Amelie returning to Quebec, and Travis and Jordy to the US).

Lucky us, we can take all the time we want here. You can see why we love Albania! in this video. 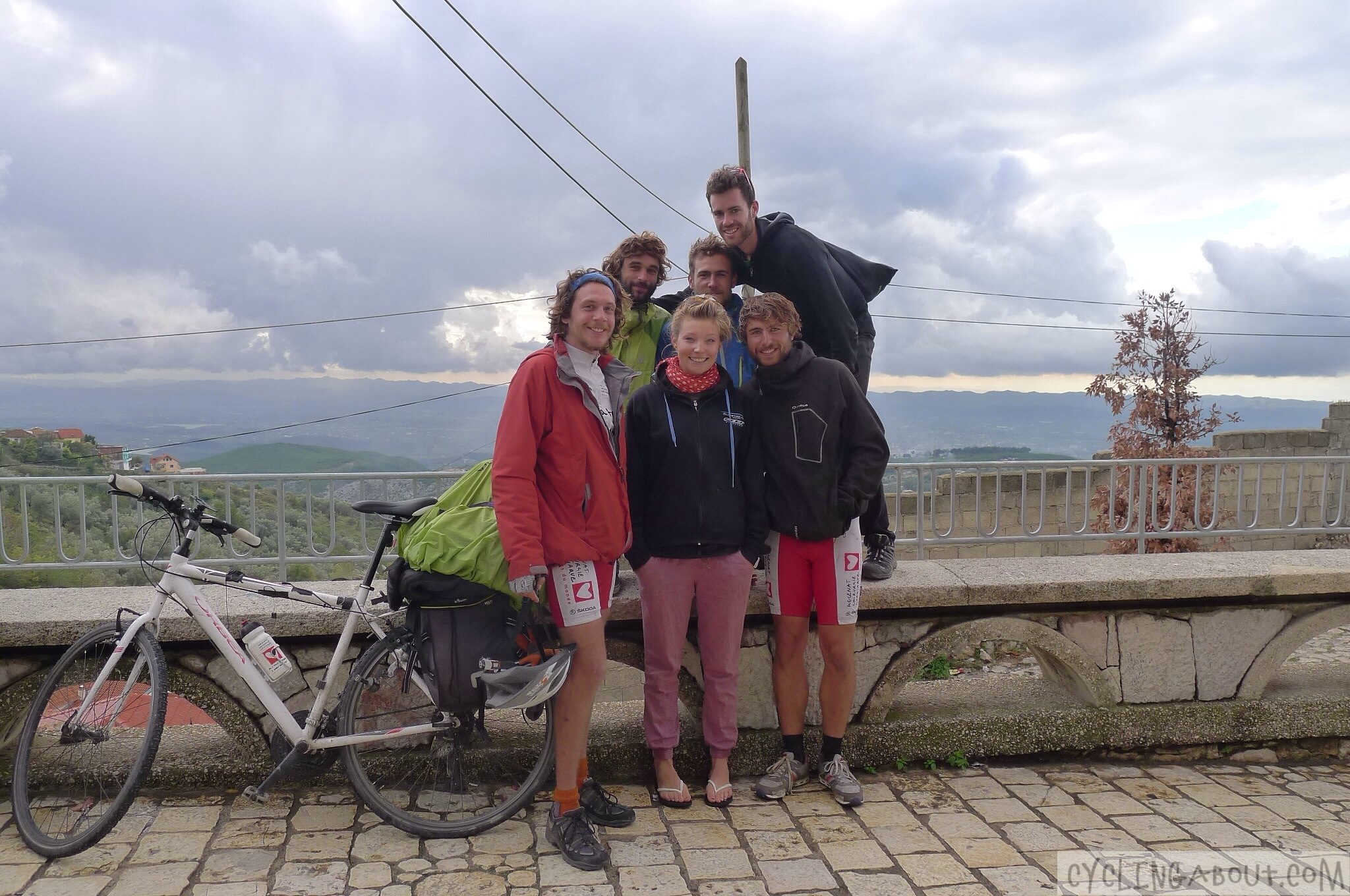 Bicycle Touring Tents: Everything You Need To Know