After our adventures reconnected with the extremely excellent Paul VDP and our new extended MTB family, we caught a lift to Saalfeldon for the MTB World Championships. We were not bicycle touring Austria, but rather relaxed where not too many would. Our lives and enjoyment at the whim of Pauly’s driving skills along the autobahn which included much squeezing through truck gaps (us), inside suicide passing (others) and a Lamborghini Aventador (oh, the sound of her).

Once we’d located the Aussie Team hotel without the help of the confused GPS, we hung about a bit getting to know the athletes including the two olympic mountain bike riders, under-23s, juniors and elite riders. 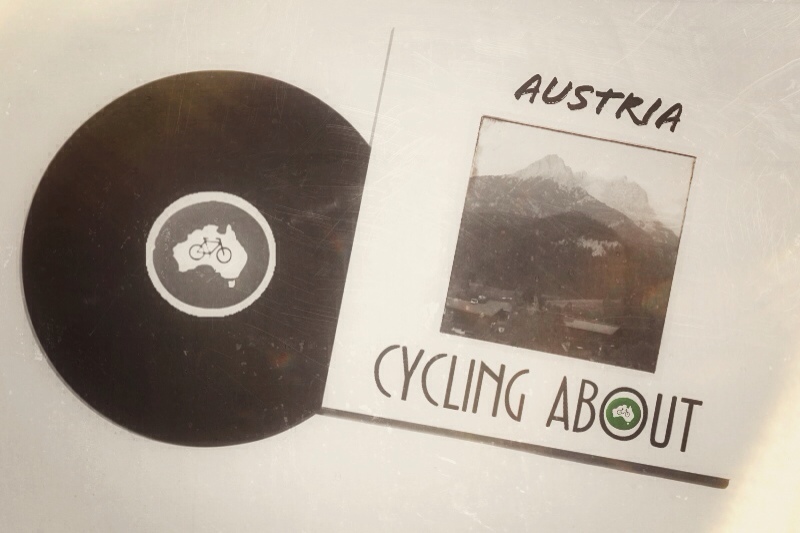 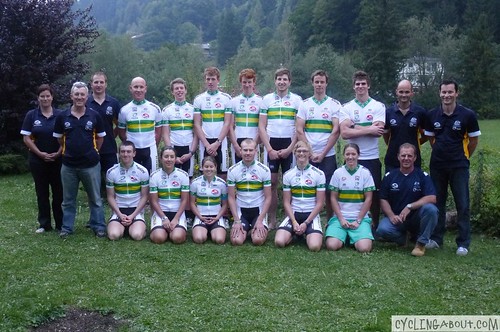 The Aussie XC team and staff.

As we unfortunately weren’t riding in the World Championships (oh what?) we couldn’t stay in the team house (there were also some interesting management politics being played out that we didn’t care to enter into) so Alleykat slept in Paul’s van that night and were entirely comfortable and happily at home in a small, cramped space. In order to get the van somewhere to sleep in it, Kat had to brave driving on the wrong right side of the road for the first time and had a little difficulty remembering to change gears with her right hand instead if her left! 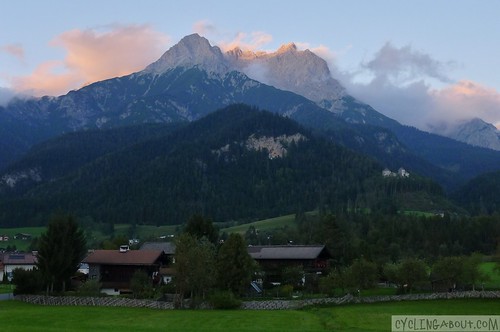 This was the view from our tent door!

Alleykat end up moving camp and tenting next to the racetrack for the next few nights. From here we were able to sunbathe, run up mountains in bikeshoes (Alex), write up mountainous quantities (Kat), watch and take photos of the Aussies racing on the track near by, and generally enjoy our time in the bike-and-mountain-dominated environment. 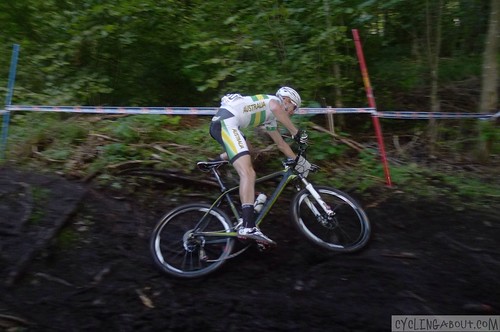 Jack Haig binning it at the perfect photo opportunity!

For Alex’s birthday, Palleykat (Paul + Alex + Kat) went out to a fancy home-cook style restaurant and enjoyed the large mouthwatering meals and huge hearty drinks provided for us. We talked well into the night, outlandishly but justifiably interrupting Paul’s training and sleeping schedule (thanks Paul). 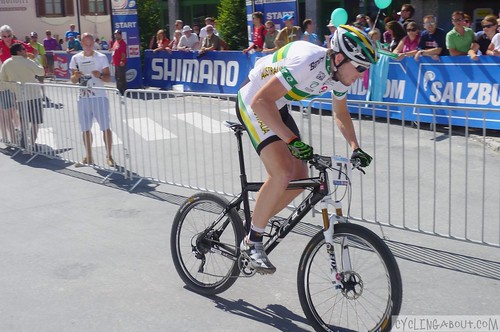 Paul doing what he does; riding fast! 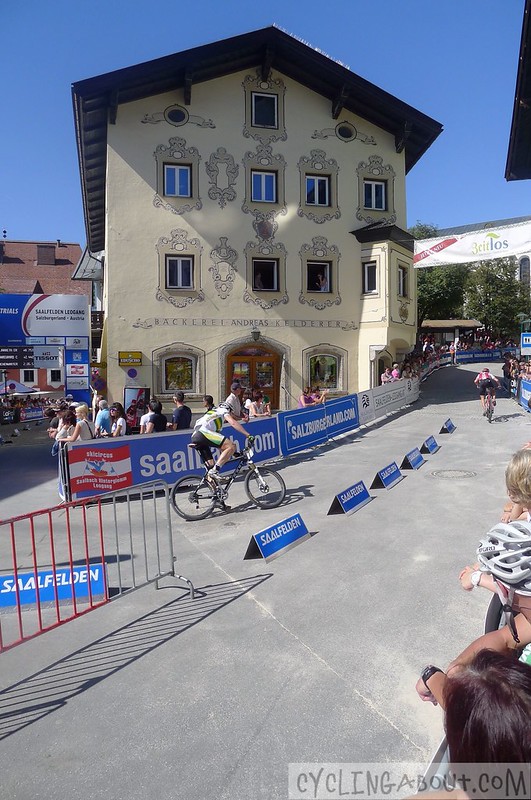 The sprint eliminator course was in a small Austrian town.

Once the racing was done (including an 8th spot for Paul in the Sprint Eliminator, y’know, just 8th best in the world and not even on a good day!) it was back on the road for Alleykat, we hitched a ride with Paul in the Felt team van and were dropped gracefully on the outskirts of Germain soil, on the fringe of Munich where we felt the wind in our hair and allowed it to ruffle our tail feathers in its German way once more.

For more on Alex’s mountain biking adventures on our trip: read up HERE.

Back into the Austrian Alps

Continuing with the sore-knee-train-riding, we snaked our efficient way from Munich to Innsbruck without so much of a leg out of place (easy when snaking!). 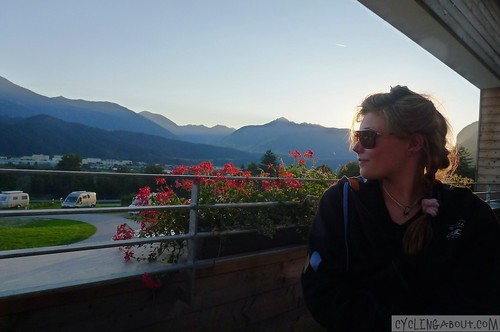 Innsbruck is in a valley surrounded by magnificent mountains, it has a liveable reputation and made Alex froth at the mouth so much he needed an outlet for it and wrote an article (read it HERE). After we completed the hilly ‘back way’ ride to the camping ground we were well rewarded for the next four days with excellent facilities, a beautiful city to explore, a mountain (or seven) to hike up, and some new Aussie friends: the spicy Zianna and George from NSW and the easy-going Sarah and Steve from QLD (our antics are well worth a read HERE). 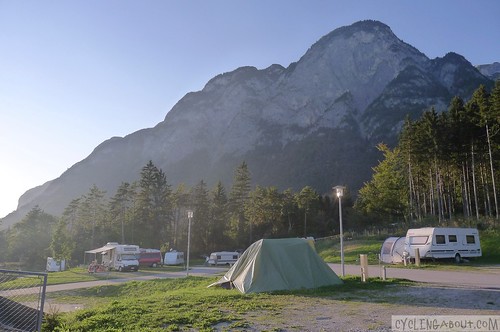 Another great view at our campsite. 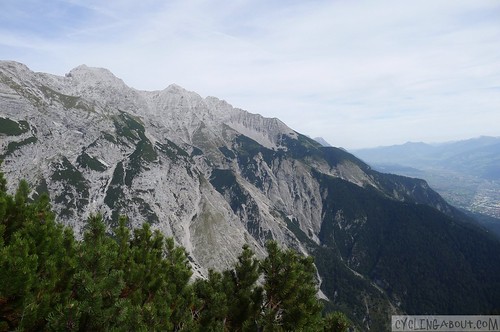 This is the view looking down from the top of the above picture!

Our most eventful night consisted of going out on the town of Innsbruck, drinking hip pocket reflexive drinks and toddling back to the camp ground with the aid of public transport. This first drinking session was enough for some lightweights (Kat and Sarah) but Alex took on the challenge with Steve, the pair of them almost got charged with drink riding but instead managed to pick a selection of apples and pears from where they couldn’t quite remember. Is the number of free things one acquires an accurate measure of a good night out? 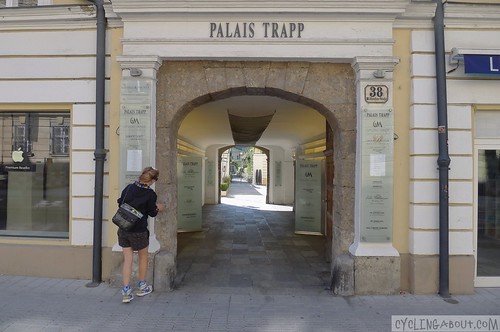 Before long and before the rain could subside, we were moving again and after a rushed but ravishing lunch of pretzels and the best figs Kat has ever (EVER) tasted we said a very sad goodbye to the cheapest and most organic/world-friendly food of the trip and boarded yet another rigorously timetabled train in order to feel another imagined border line pass beneath our feet.

Head HERE for the full gallery of Austria.