The first stop while bicycle touring Greece was a couchsurfing date in Ioannina. It was our first time but Jordy and Travis had stayed with our host Lambrini previously and could not speak highly enough of her. Their over-the-top descriptions of Lambrini turned out to be completely true – she was absolutely brilliant: crazy, delightful, energetic, fabulous and generous…to begin the alphabet. She, her boyfriend Stellios and lovely friend Nicoletta treated us as one of their own, taking us out on the town, to see The Hobbit and took care of Alee when he got drastically sick for two nights. Lambrini had to away for one night and so Stellios put his hand up to take us as couchsurfers. Greek hospitality comes with food, space, puppies and so much extension of familiarity, we were so lucky to become entangled with these new friends. 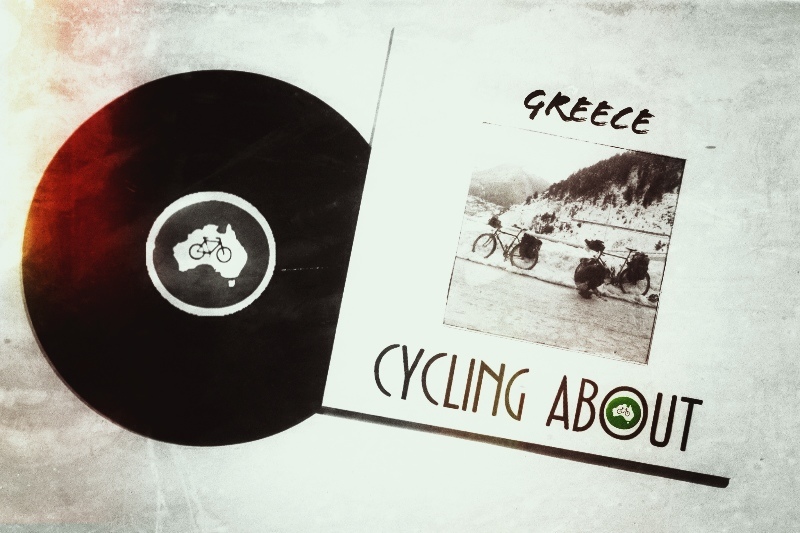 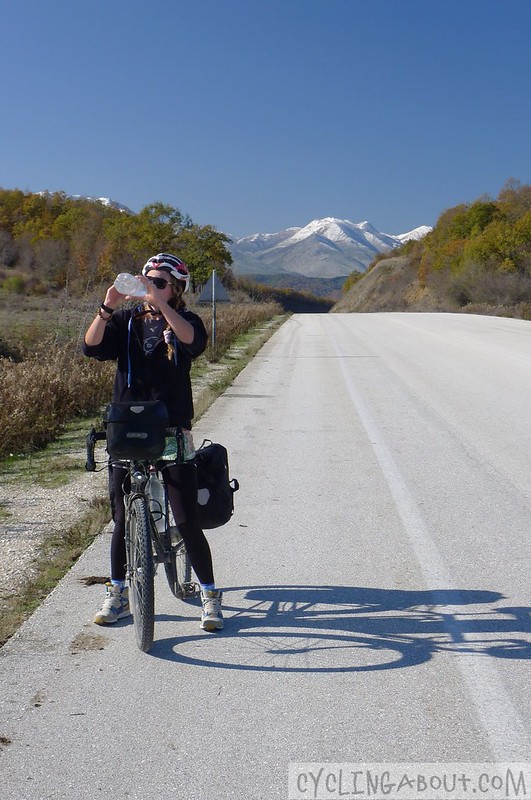 Kat taking a drink near the Albanian border. 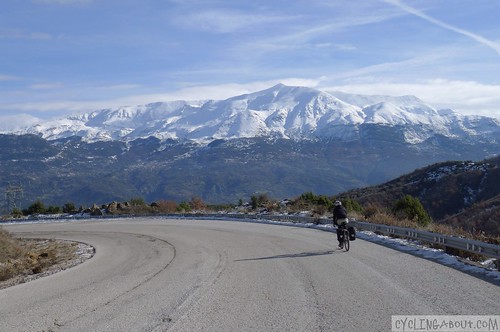 Riding near Ioannina was wonderful!

All too soon we had to leave and as we rode up into the 1600 metre mountains we began to see snow. Soon it was all around, icing up the roads and decorating the pines in a truly Christmas-Cardy manner. The 100-kilometre ride on the old highway wove us around the new highway, we went up and over and down and under this almost completely straight flat tunnel and bridge punctuated road throughout all the day. Our views were infinitely more breathtaking as were the climbs!! Five-sixths into our long, cold, lofty ride to Mesovo we were stopped by an aged couple in a car telling us where to stay in their son’s cheap hotel in the town. We took this advice and wrangled a good price eventually. 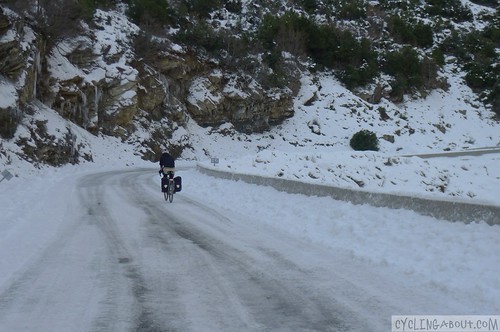 Our first time travelling in the snow. 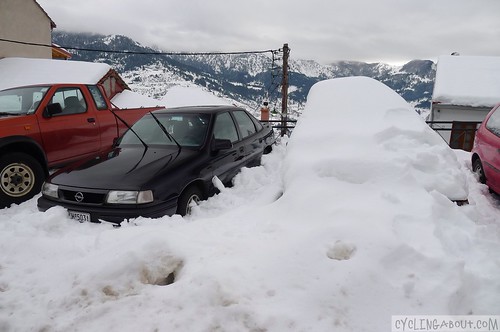 Lots of snow at Mesovo!

The snow-carpeted village was like a chilly dream, white material balanced precariously on roofs and branches, it buried cars into obscurity and made riding a but of a challenge. The next morning after we’d pooh-poohed the hotel manager’s advice to avoid the pass we were heading for we visited the local park rangers to get a second opinion. A second warning that the pass was closed and dangerous saw Alleykat heading back down part if the mountain and into the tunnels of the new highway. On our way the road gods in the form of tunnel staff, smiled in us – to our disbelief an entire lane was closed and the speed almost halved in our honour. The tunnels turned out to be tonnes of fun and as we rode past the end of the pass we had originally aimed for we thanked our lucky stars to see a metre of snow lying cheekily all the way to the connection with our road. 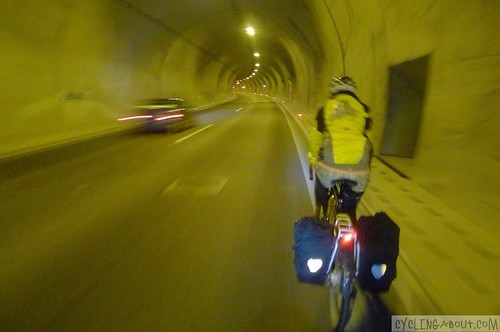 Riding in our own lane in the long tunnels of Greece

Meteora unfolded its strange self in front of us, bulbous mounds protruded oddly out of the otherwise calm, gently undulating landscape. These stone giants were our destination and we located a camping ground at their feet. Here in the camping ground we met Kiwi couple Dave and Sue, who generously shared their motor home, warmth, food and instantaneous familiar bonds with us. Two nights allowed us to ride up to the Great Meteoron and back, making a movie in the process. 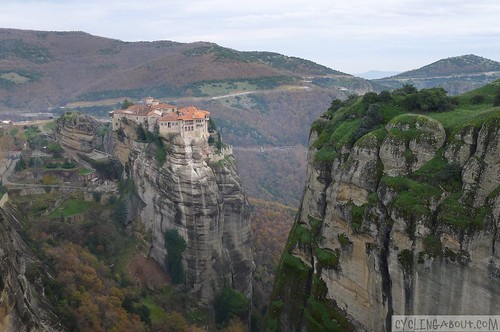 Looking across to another rock monastery in Meteora 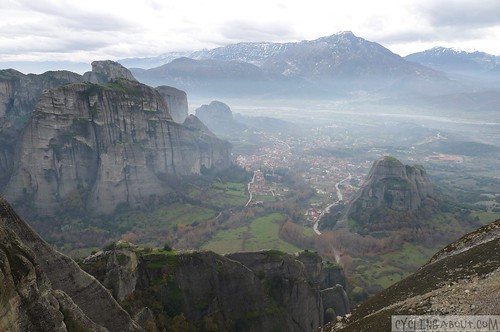 A view of the town below Meteora. 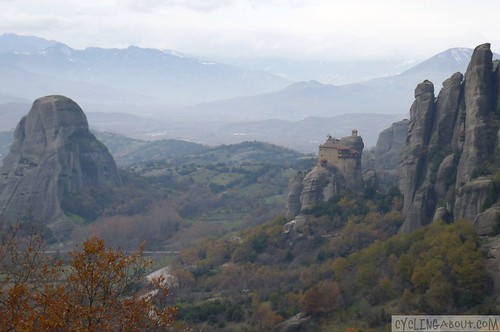 Thessaloniki (or Salonica) awaited us, a city of one million rather tightly packed into itself, after a brief but colourful and Christmassy intermission (complete with street Christmas carnivals) in Larisa. We had decided (thanks to our severely restricted last moments of time in the Schengen Zone) to take a train from here to Thessaloniki in order to spend a little time before needing to get over the border and avoid deportation for flouting the rules. 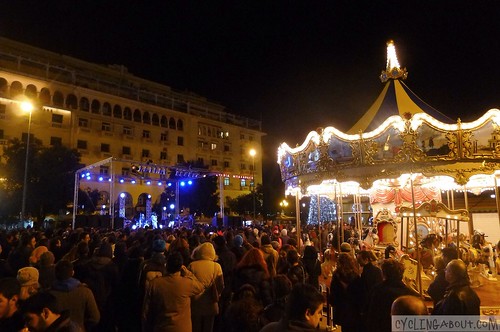 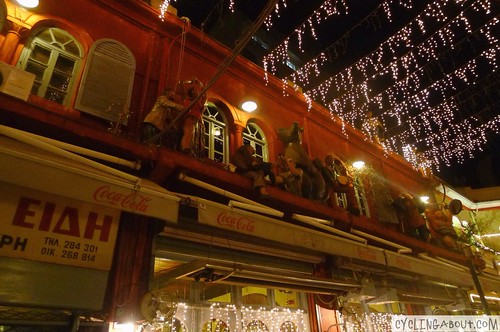 Lots of arty decoration in Thessaloniki

Salonica welcomed us late into her arms along with hundreds of others due to the two-day train strike the days previous. We located a place to stay and went about exploring the town. During our time we ate cheap and spectacular spanikopita, lost ourselves in the markets, discovered a goldmine of a specialist gourmet/Asian supermarket and walked to find the best views in the city. Excellently, we accidentally made good new friends in Xristos, Maria and Vicky who took us out for a proper Greek night out – resplendent with theatre, raiki, giros and late entrance into the land of nod. After less than two hours sleep we were off to make the early train with disastrous results (you can read about our train trials and tribulations here). After missing our train, we managed to board the late train, arrive at 1130pm in the dead of night in a dead little town called Peplos and sleep (or attempt to) in -5 degrees in an abandoned petrol station mere kilometres from the Turkish border and almost to the beginning of the next part if our adventure. 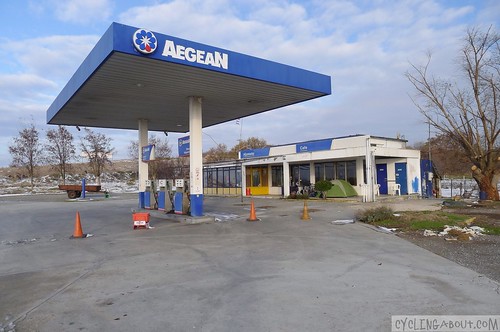 The cold, petrol station we stayed at on the Turkish border