Alee was working his movie making magic as we four flung ourselves forth from country to country, exchanging conversation and the lead in almost equal proportions. Now we were finally bicycle touring Montenegro! 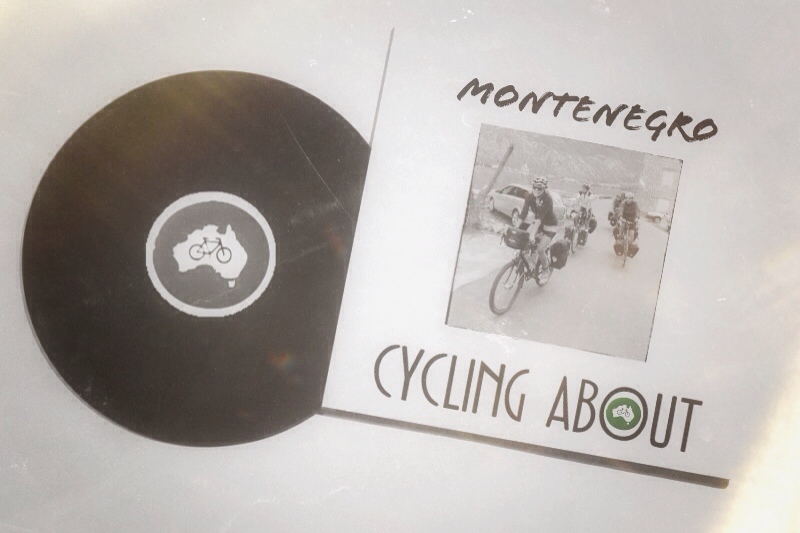 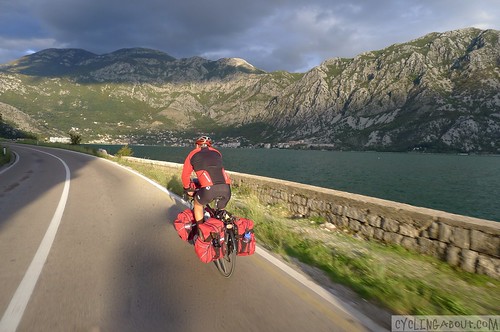 Gabe riding the Bay of Kotor: one of the best roads on our trip

As the day progressed we grew more sunkissed and excited for the last 35 kilometres around the Bay of Kotor into the city by the same name. Just as we had entered the long loop, we were paused at small traffic jam and a man in a car named Sasha kindly asked us if we needed a place to stay in Kotor, we declined, convinced we’d just bump into accommodation by luck. As our luck would have it, we instead bumped into this same fellow again, who offered us a great deal and we ate humble pie before dinner and ended up in a magnificent refurbished stone house in the old centre. 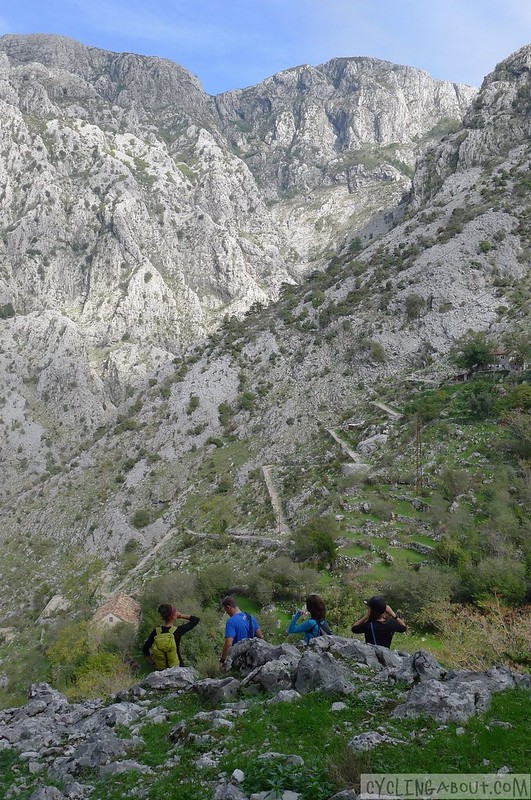 Walking up and around Kotor is A-mazing!

The place was plush and suited us well – we (ok, Gabe) cooked splendid dinners, we explored the city and followed Sasha’s further recommendations – he told us how to climb the fort the back way and put us in contact with more cycle tourers: Beatrice from Bordeaux and Travis and Jordy from Austin and Boston (respectively). 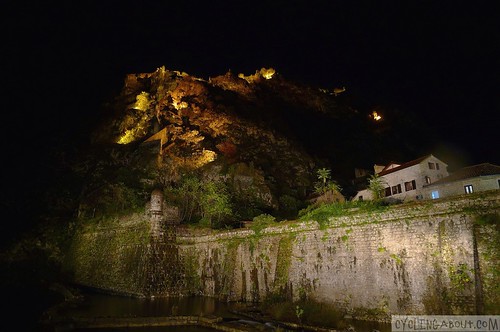 There is a fort behind the city of Kotor, which successfully protected the town from invasion (undefeated) 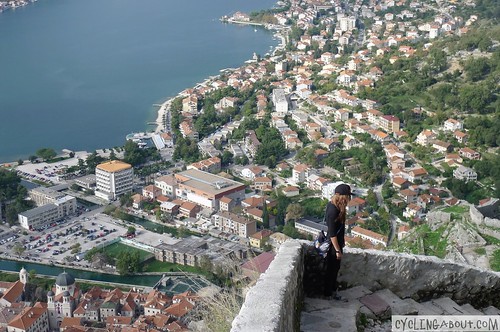 The view from the fort is stunning.

On our last full day together we (ok, Gabe) bought bracelets for us as part of an important tradition – the shop called The Cats of Kotor seemed fitting and supplied us with the perfect set. We did a cheeky session of wine tasting at a wine bar with a fabulous sommelier and made purchases. 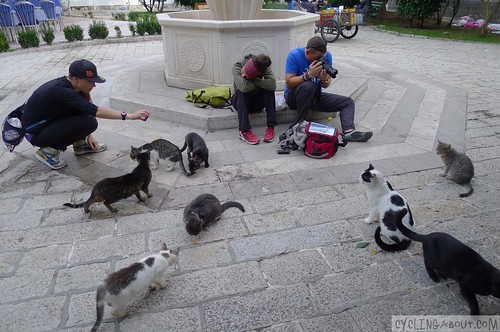 Many cats of Kotor!

On our last night we supped together with the full “Bike Tourers Inc.”: Gabe, Amelie, Beatrice, Travis and Jordy and of course Alleykat. We decided that as a sixsome (Beatrice would be taking a different solo route) we’d ride out of Kotor and then Team America and Alleykat would continue together into Albania and say a tearful goodbye to Amelie and Gabe as they had other already half-way-there-in-the-opposite-direction plans to enact. 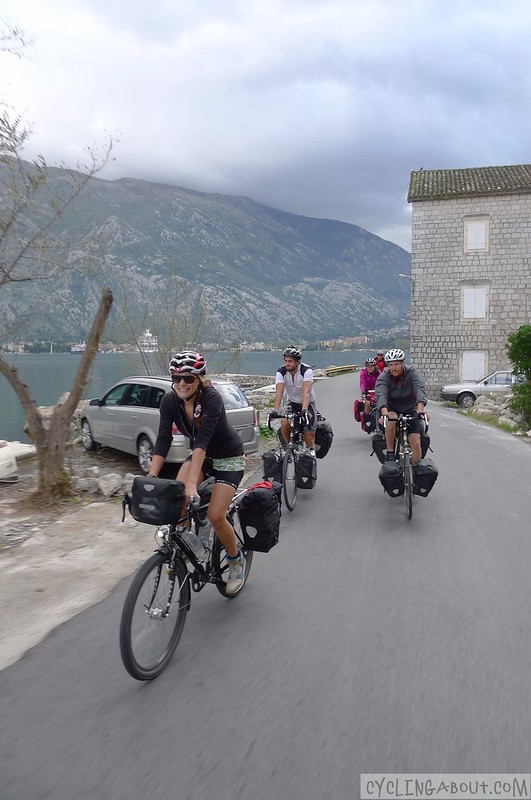 The next day, after the sixsome had split into a couple and a foursome (a short journey which of course included a small slow-moving crash and lots of hugs) Travis, Jordy and Alleykat rode in yet more sunshine toward the border. Throughout the day we sloughed away some of the polite top soil we’d been scratching around in, and found that we four actually got along really well. The last night in Montenegro accidentally turned into two – wild camping was the order for the first night, Jordy slept in his hammock and the rest of us hunkered down close to the soft spray of the ocean on the grassy knoll. 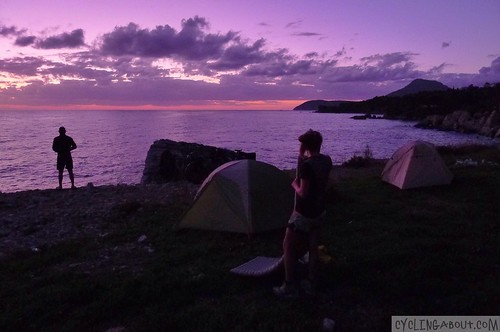 Wild camping on the ocean. Delicious.

We rode into Bär the next day and three of our four (minus a nauseous Kat) explored the Bar old city. There were plenty of hotels but unfortunately the only open one was a tad expensive for the budget conscious traveller, so instead of attempting to ride into Albania that late afternoon we turned around and found a funny little apartment to shack up in and of course use the internet in. We went ‘out’ and found that the Montenegrin youth and less-youthful (more so) enjoyed loud music and dancing. 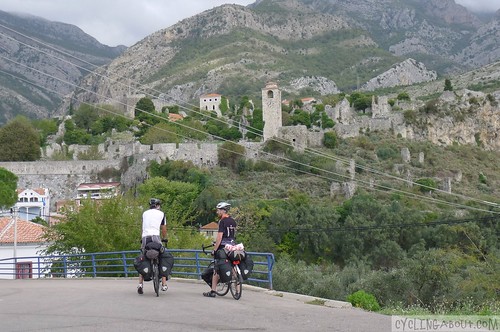 Travis and Jordy doin’ their thang.

Crossing into Albania was the “usual” border experience – the road leading to and from the border is the smoothest, cleanest, broadest and most well financed in the country. Before and after this relatively short stretch we rode on more realistic (read: oddly graded, occasionally difficult to navigate and much narrower, bumpier) roads through small farming and rural communities, the people coloured with a little more dirt and a little more kindness than their city cousins.