I have had my first fall – not from a bike but from a car! In my haste to exit the vehicle (it felt so unnatural to be on four wheels instead of two) I tripped over my large feet which were caught up on the seatbelt, not such an unlikely event as one may think – I was climbing from the backseat out the front door, you know what those two-door vehicles are like – and frustratingly, I could see it happening. I had time enough in my head to languidly entertain the thought “oh no! I’m about to fall over!” but unfortunately those seconds that seemed a lifetime long were merely moments and before I could even put my arms out to stop myself, I had tumbled out, headbutted Marian and landed with full force on my left knee. Bang! Blood seeped out in a thin horizontal line through my Black Milk ‘beetlejuice’ or ‘Montague’ style leggings, just the mere sight of the crimson extrusion made the adrenaline zigzag through my veins, making the wound bleed more than was strictly necessary. I was very well taken care of by Steffie and Marian and Alex and in no time the only trace that I had fallen was some mild limping and a little oozing line. Or so I thought… 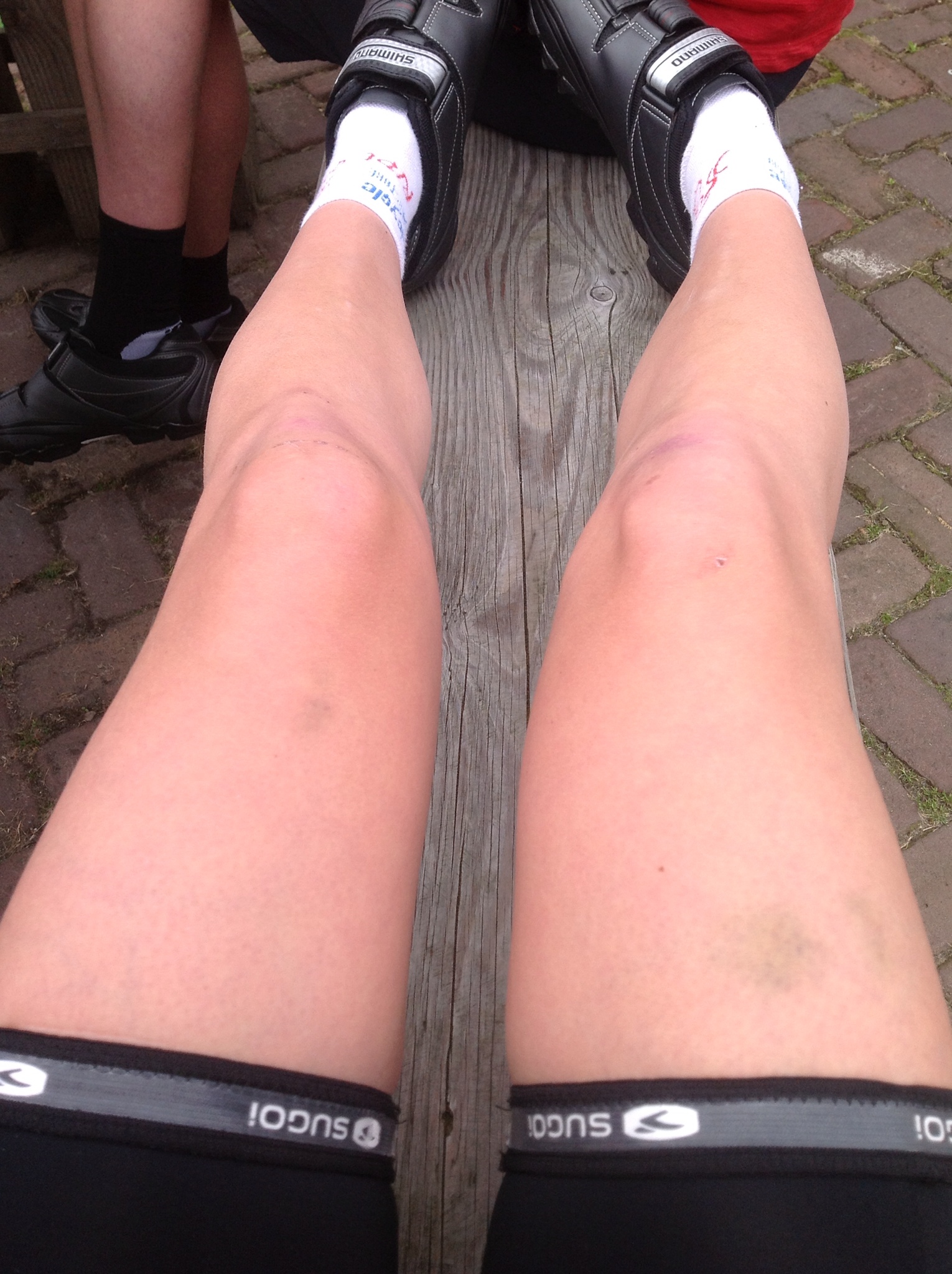 My bruised and battered legs a few days after…

We are now holed up, five days later in Utrecht waiting for my knee to stop hurting. I have clearly done some ligament damage as it seizes up if I leave it bent for longer than about fifty seven seconds. This is highly frustrating on one hand because I have been looking after my dodgy knees (and hips and feet) for a while now and this seems to have put me back at square one: pain rushing to my knee when I do anything but have it immobile and straight, for example ride a bike! But on the other hand, we are luxuriating in the tent staying at Fort de Klop, a real fort(!) with hot water and toilets and a restaurant for our drinking pleasure. It is thoroughly enjoyable being snug sitting in the tent listening to the rain fall musically on the fly. 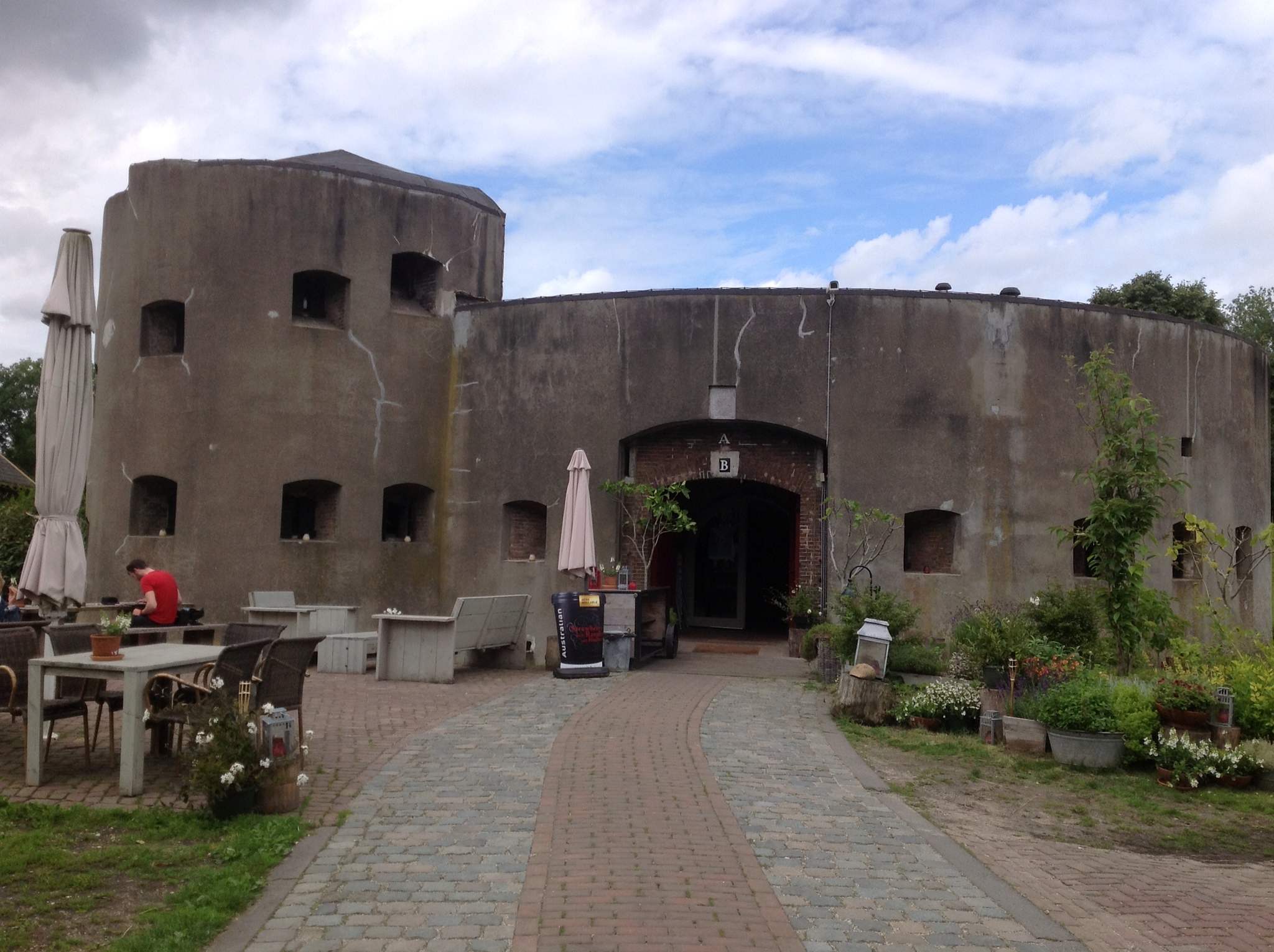 Despite this knee-related disturbance in our progress, my pain-in-the-knee hasn’t been a pain-in-the-arse (at least in terms of not stopping us getting amongst it) thus far. Three days ago we made our way from Delft to Amsterdam in non-stop rain. 85 kilometers took us a good six hours – three of those were undoubtedly spent either being lost, stopped to look at the groovy Garmin or informative iPad for directions, off the bikes under a tree scoffing kokinjas (amazing Dutch licorice jols), being lost, riding around towns instead of though them, riding through cities instead of around them, and oh, being lost. The Dutch heavens rained on us continuously, so much for chasing summer! The dreary day allowed for a twelve degree maxiumu and a thorough dousing in water, we were drenched from the downfall and almost drowned when we finally made it to the Stay Okay Hostel in Amsterdam. We have learned that flying by the seat of one’s pants is all wheel and good until it is school holidays in Amsterdam and every hotel within cycling distance seems to be full. Luckily I am riding around the world with a champion, a navigator extraordinaire and, most helpfully, a man (yes, it’s the same one) who keeps a level head in almost every circumstance who was almost as wet as I was (ok, fine, equally as wet, but I’m sure my feet were wetter!) was able to find us a warm, dry, hospitable place to stay a couple of nights in appetizing Amsterdam.

Whetting our appetite with Albert Heijn and the Red Light District

Amsterdam is a city where anything goes. Lady Gaga on a bike is not out of the ordinary. Cats in supermarkets are welcome. Riding a bike laden with two or three of your teenage friends or your four toddlers and week’s shopping is not only acceptable but is expected. We wandered around all day, finding new and old and interesting things to look at. Bikes and stoners rule the streets with equal rights. The city itself is five or six storeys high (and about that high too) buildings and people all have a certain lean to them – some are so slanted, I’m surprised they haven’t already keeled over! The bell towers in every Dutch city we have visited thus far have been precariously positioned, Amsterdam’s included, so angularly, they could each give the leaning tower of Pisa a run for its money. For a delectable dinner, we discovered again the simple brilliance of Albert Heijn – a supermarket chain that highly resembles the aptitude of the always plentiful Peidemontes in Fitzroy (go if you haven’t been!).

After dinner (and admittedly, before dinner as well) we visited the Red Light District. It was something that needs to be seen to be believed, so many many women standing in their own red-lit (often blue-light lit too) doorways. During the day, the offerings were not particularly appetising, although they must be to some because it is a money-making industry after all, but in the evening there were some truly blossoming and buxom beauties. Alex and I were fascinated and possibly a little aroused by the brazen sexuality of it all. What a life these capable and confident ladies must lead. There was much caterwauling and craziness and of course, no night in such an overtly sexual place would be complete without a couple of fellows being chastised by their spouses. We wound our way around the back streets to discover that now the main streets too were transformed from crackpot-catering pokey little places to being positively oozing with enthusiasm and extravertism and any other ism you can fit into a neon-glowing bikini. Given that we weren’t about to pay for porn, we soon grew weary of the horny hoards and retired at a respectable hour just on the cusp of morning. 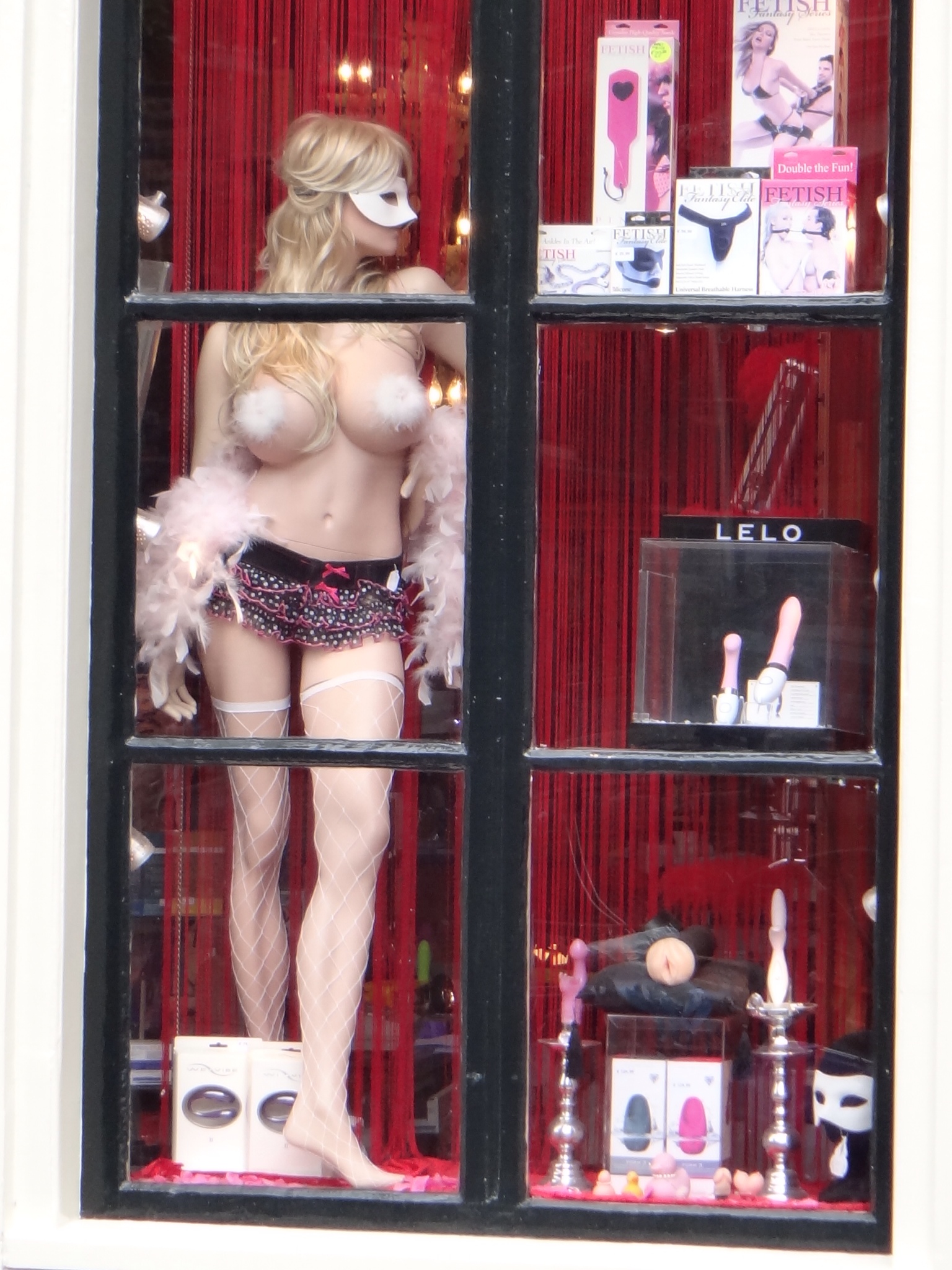 One is not really allowed to take photos of the Red Light Ladies, but this mannequin is a fairly good approximation of what one is in for.

Blog 13: Kinda Back On The Bike