“Hello my friends, can I help you?”: the first words uttered by our new friend, Turgay. Having had previously exclusively positive experiences with offers of help; Alleykat should have breathed a sigh of relief that a Turk was calling out to us. But instead with slight trepidation, given we had just wrangled TanNayNay the Tandem and all our bags down into a sneaky (or apparently not-so-sneaky) wild camp spot just past Fatsa, we were ready for the caller to be the owner of the orchard we’d appropriated as a camp site. Perhaps not so happy to see us… 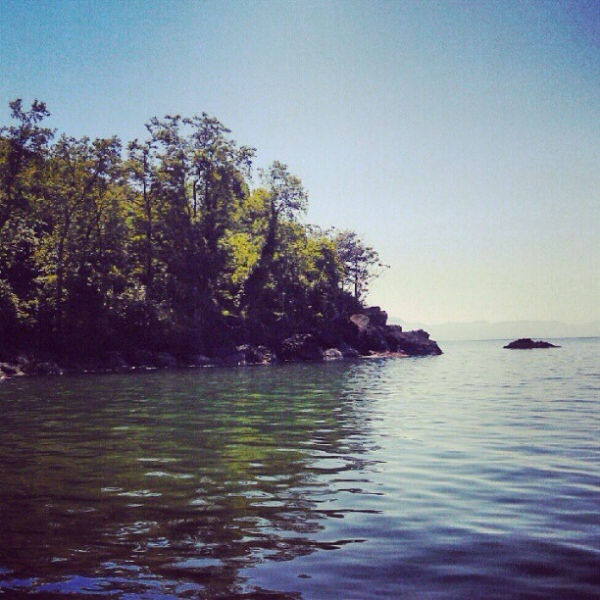 Not only was Turgay extremely approachable (actually he did the approaching with his girlfriend Gülçin and friend Feridun none the less it was an approachable approach), but within sheer seconds of meeting us and learning of our plans, he’d invited us to dinner and to stay the night with he and his family.

Soon we had met Fatma, his dear, kind, extraordinarily motherly mum and were eating an incredible home cooked organic meal. The table was constructed from plates and food and good vibrations after we were joined by Turgut (Father) and Tuncay and another Turkish English teacher Murat. There were conversations hovering around our heads and feverish outbursts accompanying the football (soccer) commentary coming from the TV in the corner. 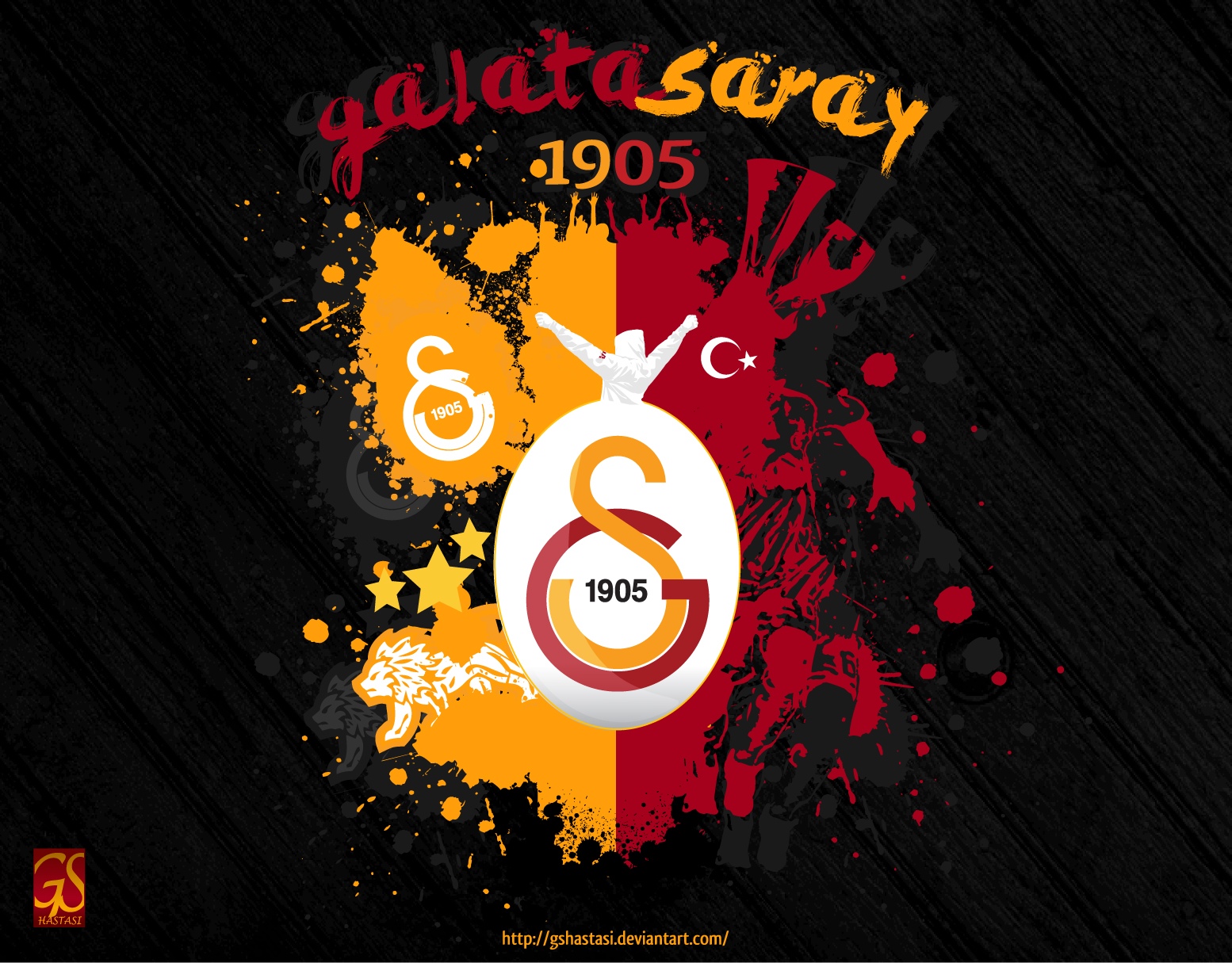 Fatma fed us until our little stomachs were rotund and then fed us some more. Turgay insisted we sleep in his posturepedic bed and sleep in because tomorrow we were going to relax and let him be our Turgay, I mean our tour guide. (For reference, Turgay’s name sounds to my untrained, Australian ear like Tour Guy…)

That night, after deliciously furiously warm showers and more çay than I care to mention, we slept like cats basking in the sunshine (of course that’s what we were like). After a sleep in, we breakfasted in awe. Fatma was cooking for two hours (!!) before we sleepy cats emerged from our warm den – she prepared a series of super-duper special traditional dishes: one that is unique to Fatsa, a special kale-like plant, found only in the Fatsa area, prepared with organic butter and some kind of moorish bread and a plethora of other secret and not-so-secretly-tasty ingredients. There was so much food it took we three (Turgay, Alex and myself helped only slightly by Fatma!) almost two hours to devour the feast. 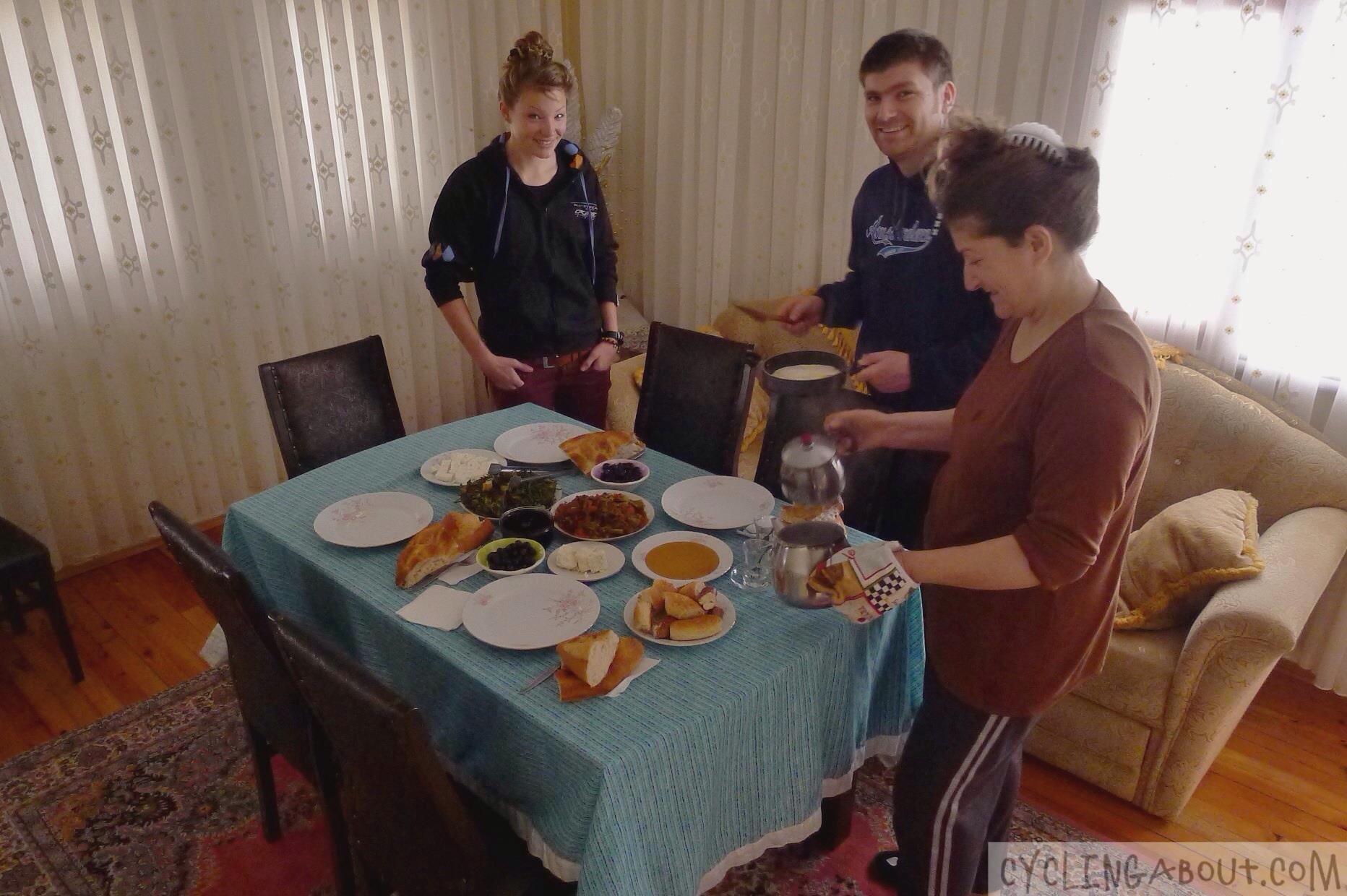 The rest of our busy day unfolded thus: on the shorefront, we met with five of Turgay’s students. Turgay is an English teacher at the local Fatsa high school and his students obviously adore him and his out-of-the-box teaching methods. It is not at all usual for teachers to interact with their students outside of school, yet here we were, having Turk Cahve (Turkish Coffee) and çay and nescafe with some enthusiastic excitable teenagers. 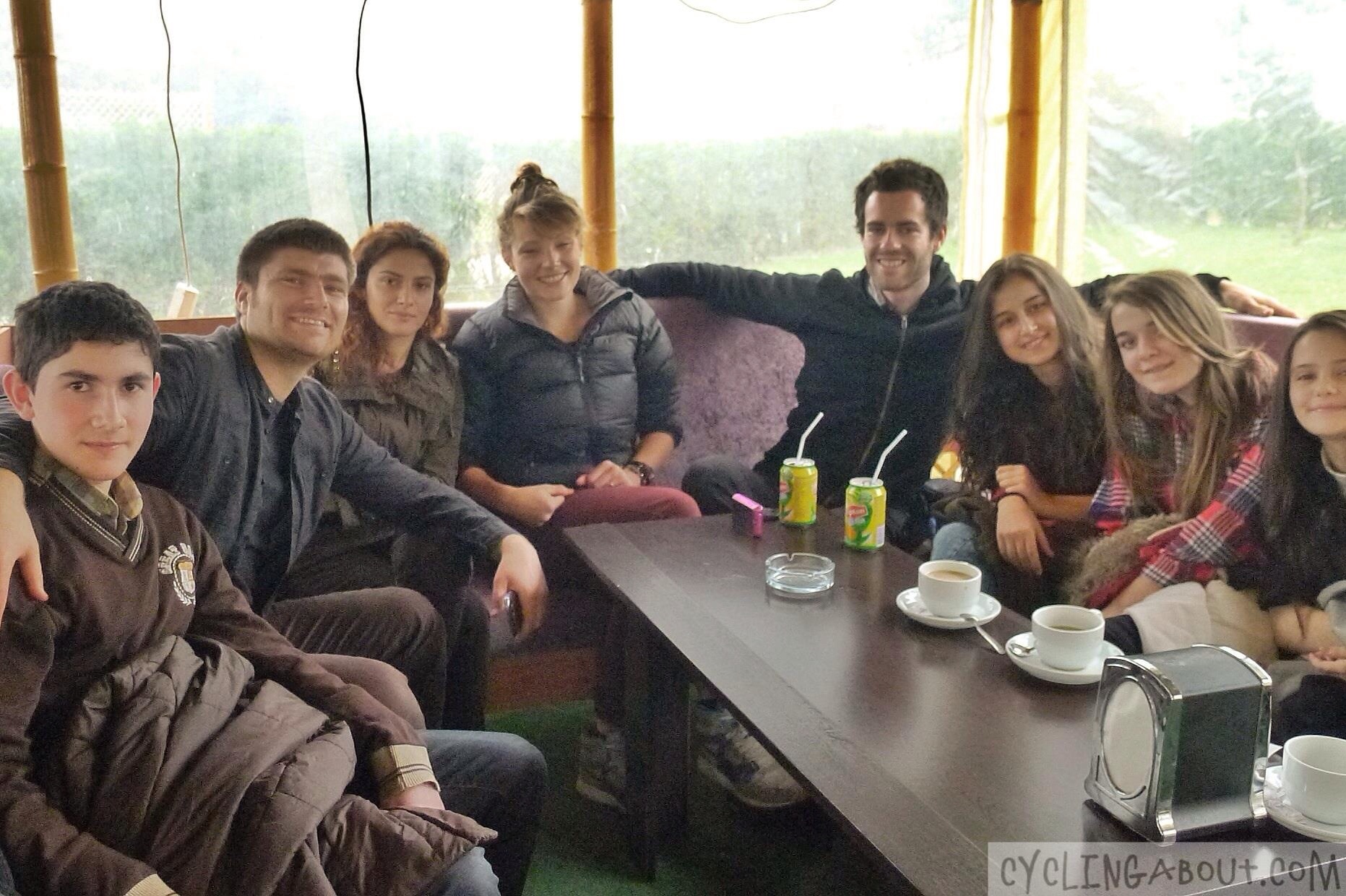 We sat with Gülçin (Turgay’s delightful girlfriend of two and a half years) Ismail (and a friend of his who wasn’t in the class), G?lsah, Erdi, Tugce and Tugba practicing English (and Turkish!!) and learning a little about each another. It was initially a little overwhelming for the kids, Alex and I included, but once we’d broken the ice with some shared favourite music, conversation became smoother and friendships grew warmer.

After we’d said our goodbyes (not forever goodbye however because Turgay had invited us to join his class for the first two periods the next day, Monday) we four headed off for a bit of exploration along the coast. We drove back past where Turgay had found us initially, mere hours before, and around the scenic route towards Ordu. We dined on infamous pide along the way and visited Jason’s church (I’m not sure who Jason was, but he was lucky to have such a pretty building and çay house!). Before we’d realised it, darkness fit neatly into the spaces between us, but our surprise in Ordu was in fact enhanced by the inky depths we watched disappear beneath us – on our way up a 600m chairlift! Thanks for the surprise and the sahlep afterwards, Turgay and Gülçin! 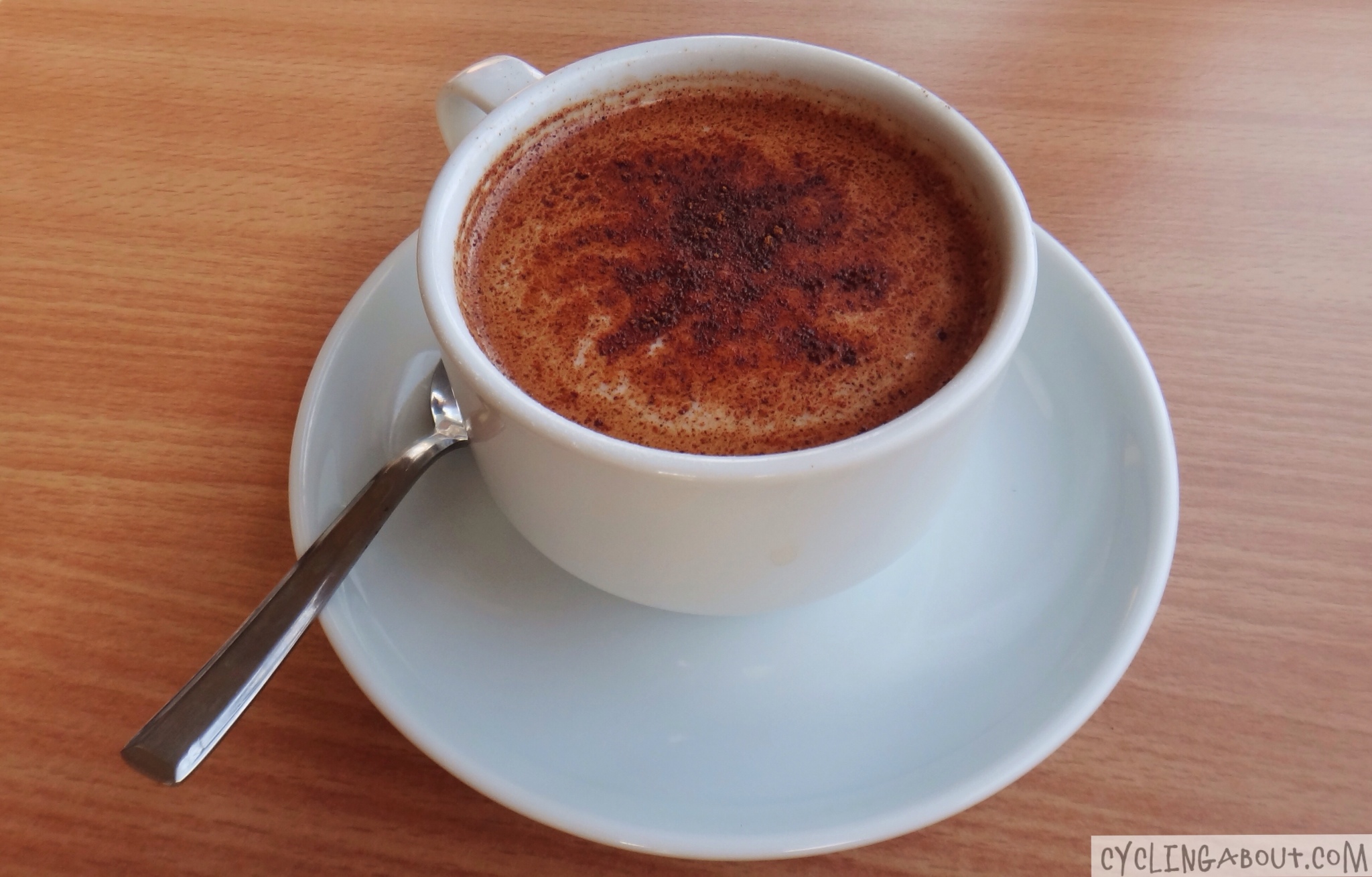 The hospitality and generosity didn’t end there; Gülçin’s mother Fatma (definitely not the same Fatma!) hand sewed me a Ba?örtüsü (headscarf) because she’d heard about Alleykat’s intrepid plans for Iran visitations and knows a thing or two about traditions. Next thing we knew, we were “home” again and Fatma too had hand sewed me a Ba?örtüsü and also bequeathed Alex a scarf bearing the red, gold and black of Galata Saray (the best football team in Turkey we’ve been told). Oh, and more food of course! Our tummies were filled pleasantly with savouries and sweets and çay, so much çay! More fun times were had before we draped ourselves over the shoulders of sleepiness and sank into bed.

Up at 6:30 was admittedly a bit if a shock to the system, but it was well worth the early start. By 8:15am Turgay had introduced us to pretty much the entire school and finally we were in the delightful class of 10E. The beautiful and handsome young Turkish faces of G?lsah, Ismail, Tugce,Tugba, Banu Senol, Tugba, Erkan, Gonca, Beyza, Funda, Miray, Eda, Gungor, Aysenur and Onur started back at us. (Erdi who we’d met the day before was unfortunately absent).

(A note to 10E: If I have left anyone out of this list, or doubled up on a name, please forgive me and my newbie ignorance).

I think we made them nervous, but there was such intellect and warmth zooming around the room it was impossible to miss. Ismail, G?lsah, Tugce and Tugba were especially kind to us, making us feel welcome and less nervous ourselves. Banu Senol, a half English half Turkish girl surprised us with her Brittish accent and by answering our questions so promptly and thoughtfully. We were so impressed by ALL the students (and of course by Turgay and his teaching). There is certainly nothing wrong with the youth of Turkey, there is a bright future ahead if these girls and guys are anything to go by!! 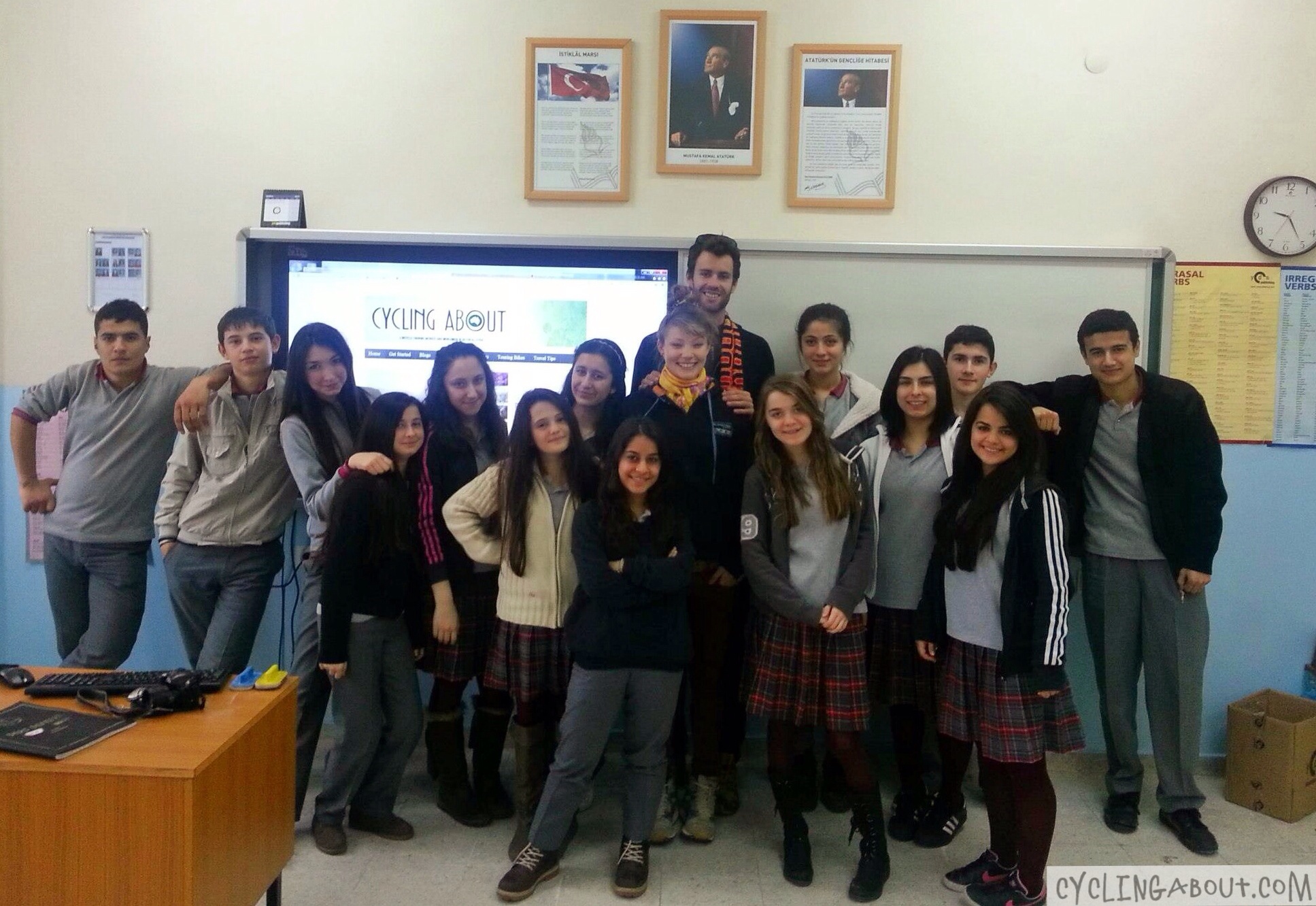 With heavy hearts, tired smile muscles, arms still full of hugs and hands almost dizzy from waving; we said goodbye to our new friends and were whisked away by the ever doting Turgay, who delivered us home in the rain so we could do a final pack of the bike, don wet weather gear and ride off towards Giresun 85kms away.

There is nothing quite like Turkish hospitality, the Turks we have been lucky enough to meet are rich with generosity. We wish we had been able to stay much longer and integrate some more into the community, but we had 18 days left in Turkey (at the time, it’s a mere 12, almost 11 now!) an Iranian visa still to organise and of course thousands of kilometres to cycle, in both horizontal and vertical measures!! Likely be if we had arrived a week earlier the universe may not have flexed her starry fingers and we would probably not have met Turgay et. al.

We promised we would never forget them and trust us, we never will!! Thank you Fatsa and thank you Turkey!! 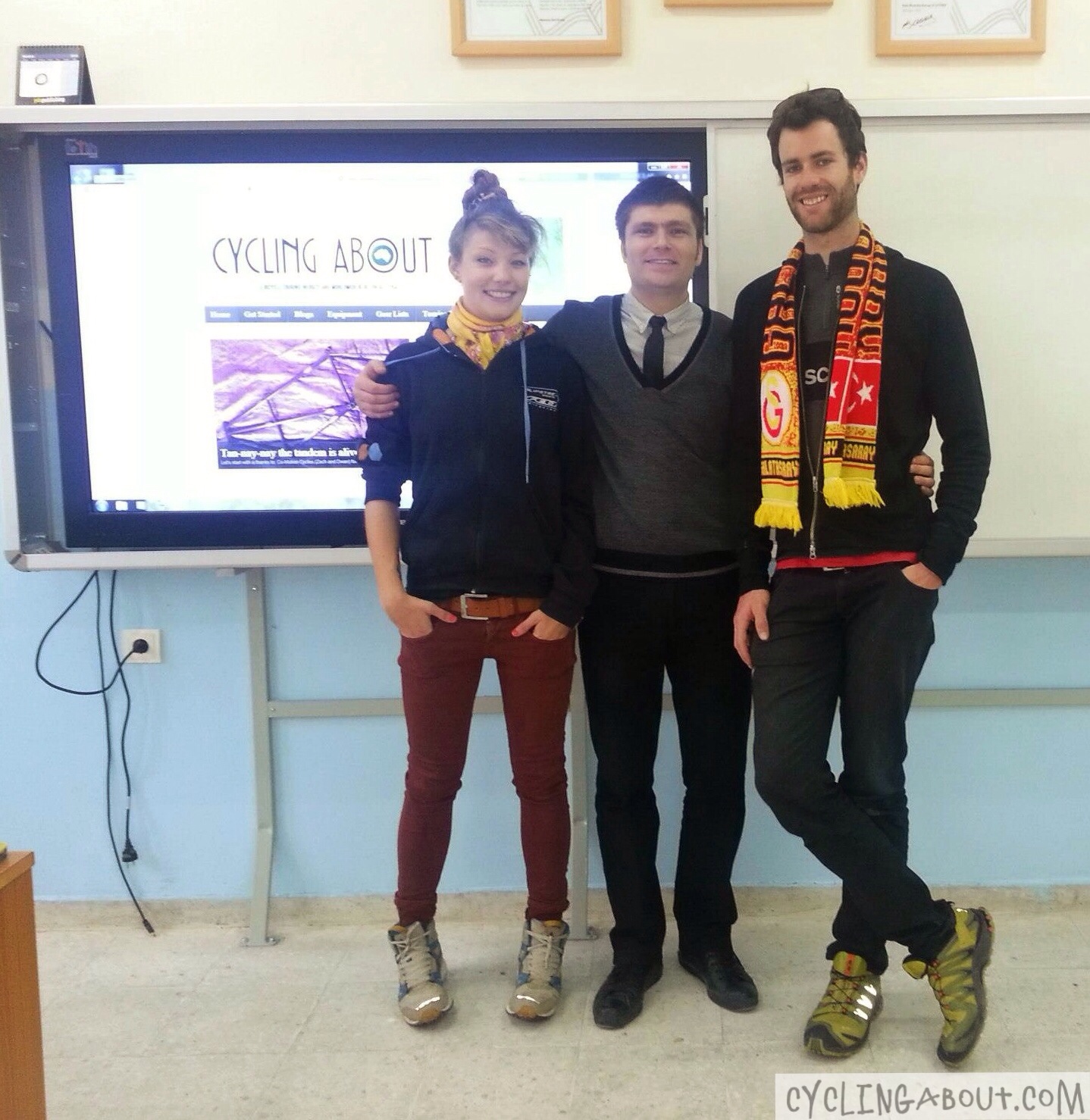