As we rode across the border, our wheels were collecting distance and confidence. The next step was to go bicycle touring Croatia!

Umag greeted us with an enormous international tennis centre, with white marble-paved old city streets and with a vast soon-to-be-closed-for-winter camping ground. We met many motor-homers in their twilight years and a young French couple touring on a tandem.

After a few days soaked in sunshine, sunsets and Croatia’s best attempts at rain (which only surmounted in a vague, simpering version of spitting) setting off was just another day of rolling along on the resplendent comely Croatian coast. 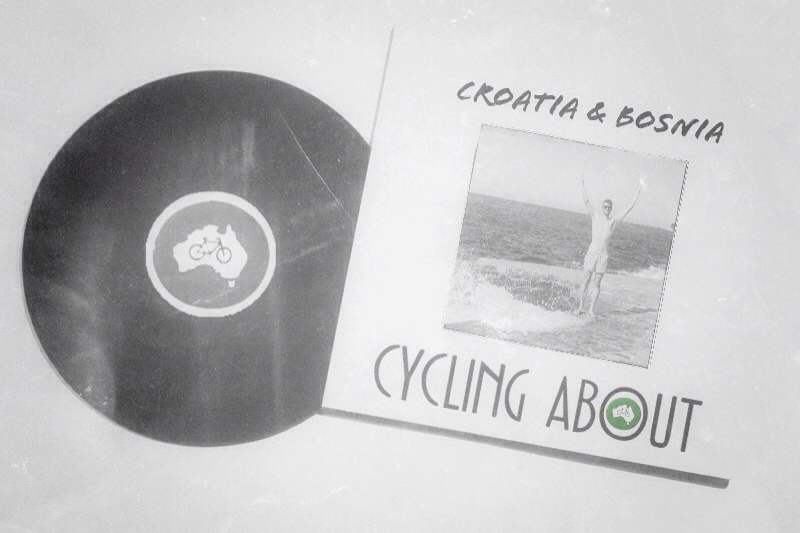 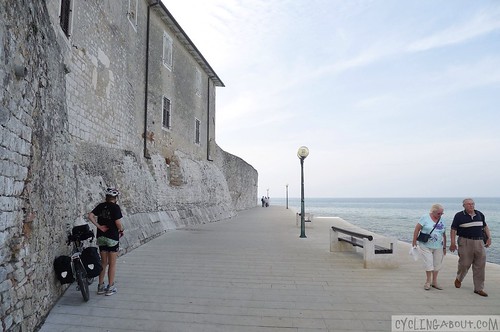 Kat taking a break in Porec, after a long day riding around.

We reached Porec and treated ourselves to some ice cream – we’d become so accustomed to daily ice creams thanks to the combined efforts of Kitty, Cami and Italy that it seemed like the only thing to do. Here we met Nahid and Melanie who are among the masses of Croatians who work in the insane-tourism-driven animal of industry which lashes its tail and gashes its teeth in the many cities and towns throughout the country from March or April through to late November. We camped about 10 kilometres from the old town centre but visited daily to eat and feast our eyes on the historic white marble buildings and streets. We tried truffle pizza at Cafe No No – where we mistakenly ordered a large thinking the monstrosities sitting on tales before other diners were that approximate size, only to have a pizza the size of a teenage dolphin grace our table within 20 minutes of ordering. None the less, it was delicious and decadent and we had our every other sense dulled by the experience in order to do our taste buds justice. 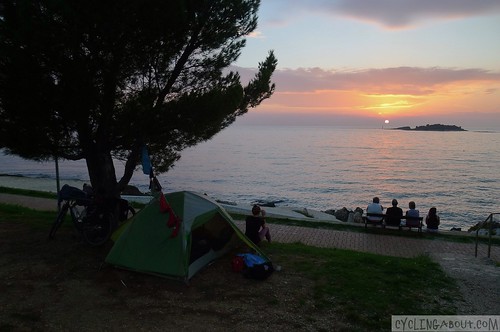 Our campsite near Porec – it was pretty hard to leave this place!

The Porec camping ground was a paradise for us – tame rocks leading gently into the ocean a few metres in front of our tent site, days full of mild temperatures and strong sunshine – and too, paradise for German tourists…instead of ‘doberdan’, the word was a thickly accented ‘morgen’ or ‘guten tag’. Croatia apparently becomes Germany 2.0 throughout the summer months. 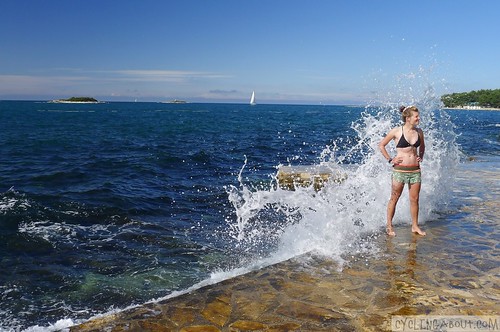 Having fun in the beautiful Adriatic water

After six super days in the soporific sun and sublime surroundings we forced ourselves to pack up shop and move on. Fažana was waiting for us down the road with another enormous camping ground, sea views and German voices all day and all night.

From here we headed to Pula and stopped by Rovinj and its famous and ‘look at me’ stand-out church spire. Lunch here was accompanied by cats, gulls and Germans and was followed by a constitutional Croatian-style: steep white marble cobbled streets, sunshine, more tourists and ice cream. After another bout of riding, Pula and her busy bustling hubbub greeted us. 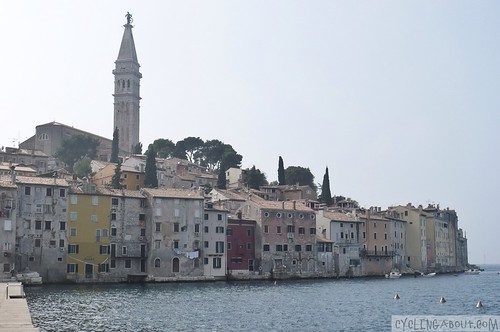 The ‘look at me’ church spire in Rovinj

As we now know is traditional in Croatia, we joined the German tourists and stayed a little ways out of the city (and its ancient colosseum and architecture) in a perfect little camping ground. The camping sites were expensive and on uneven ground but the swimming 20 metres from our front door, the peaceful mostly empty grounds and the clean always open bathrooms were very much worth it. 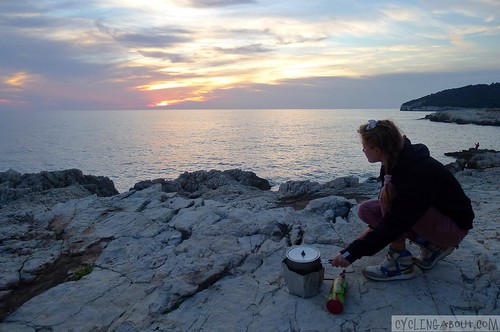 Our perfect kitchen in Pula.

We had an eventful six days here – lots of swimming and lounging in the sun, making our very first cyclingabout.com video (you can watch it HERE), Alee got super sick, Kat found out she had/has Lyme disease (after a strange and long visit to a scary Croatian hospital), visiting the many impressive sights and locations in Pula old town and suffering our first bite from the stealing bug (our washing line and Alee’s electric shaver). 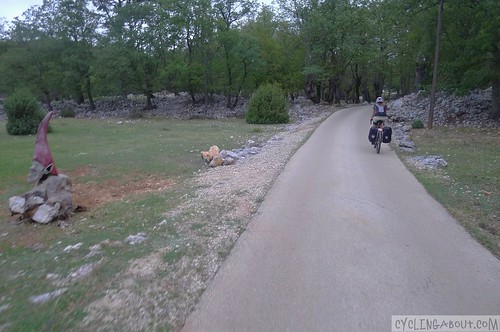 A road lined with gnomes on Cres Island

Further along the winding, undulating and picturesque coastline we branched out and took a ferry the Pope had been on to the island of ?res. We were greeted by a gentle rise to ascend – eight kilometres in and we’d reached the small town named Filozo?i that Kiwi Wendy had recommended to us – we serendipitously met the same family she’d received much generosity from – we slept in Igor’s guesthouse, sampled his fine home-made wine, played with his puppy and his son and of course made a video about it.

?res was an island to meet people and ride amazing roads – we found friends in two American women, Tamara and Christina, also touring the lovely Croatia by bike and after a short overnight stop and an unfortunate break in one of our tent poles, rode in favourable weather along the length of the island. 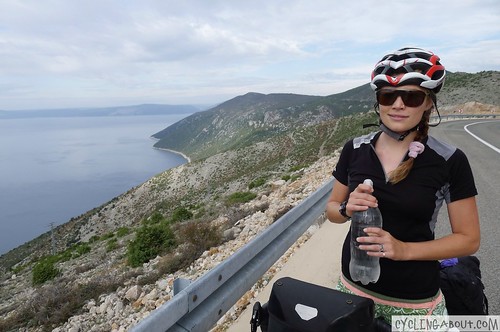 On our way to Mali Losinj, the dolphin-inhabited ‘other end’ of ?res, we were blessed by the animist gods and interrupted a deer crossing the road, watched infamous griffon vultures circle hungrily in the cloudy sky and remained dog-free the whole journey. Our camping ground was flooded later that night – no fewer than eight storm fronts passed over us, dousing us thoroughly in the unsuitable-for-tenting campsite creating a tent-boat situation for us. Morning brought renewed peace and another ferry trip well into the next night.

We met new friends Rebecca and Ian during the long wait for the ferry – which arrived more than an hour and a half late, meaning that our travel time was extended indefinitely. Once we’d arrived in Zadar at 1am we were humbled by our apartment owner who had stayed awake to let us in! 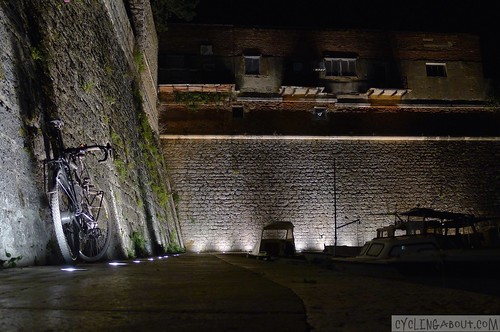 The city walls of Zadar

Zadar was well worth the few days we spent exploring it – the communal spaces decorated with the Sea Organ and the solar-powered Sun Salutation (both designed by artist Nikola Basic, Alee tells you all about it in THIS VIDEO) and the community itself (including a live-in all year round Santa Clause) were great. On the day we decided to ride out of Zadar we were blasted by a headwind determined to blow our faces into ‘when the wind changed’ obscurity and lend an extra 50 kilometres of effort to the meagre 65 we managed that day. We searched for prices in the closest town to sunset and for a while could only find outrageous asks (40€+ for the night) but luckily our ‘one last go’ turned up a well-priced apartment with a balcony to cook on. 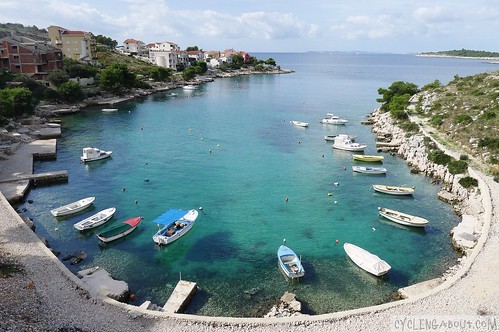 The next day saw us braving much thicker traffic on childishly drawn roads, making entering Split by bike a challenge that tested even Alee’s patience. Eventually, we found a backstreets-back-alright way and ended up at a lovely seaside campground 10 kilometres out from the city. Six days later we were on the road again after having spent our time enjoying famous and not-so-famous burek and pizza, marvelling at the ancient white waterfront city and finding a replacement tent pole in sunny Split. 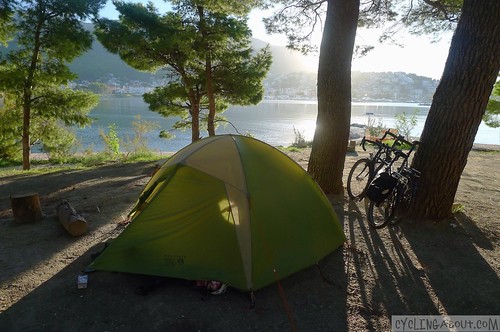 Our sunny and sweet campsite in Split 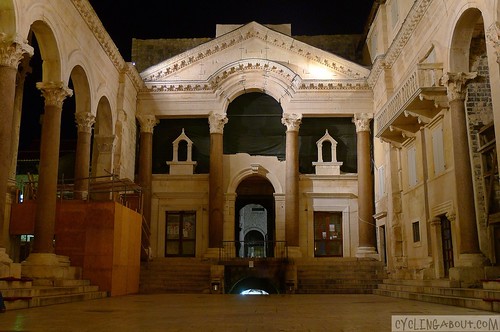 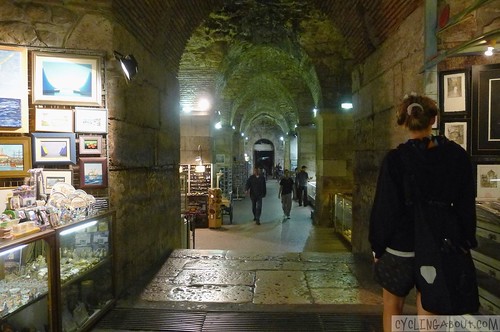 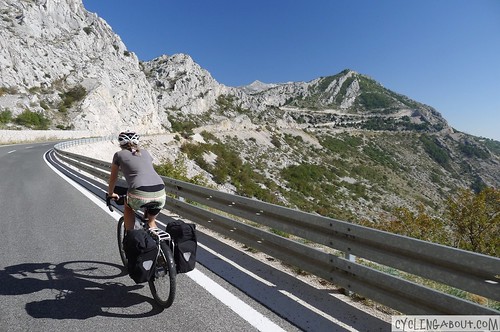 The road between Split and Ploce is one of the best sections of road along the Adriatic!

A long day of enjoyable riding had us landing at a tiny little camping ground (which we have regrettably forgotten the name of) where we camped almost for free with scalding hot showers, cheap drinks and lots of peace and quiet. Just before sunset and into twilight, we dipped ourselves shortly in the warm Mediterranean and were rewarded for our efforts with magical warm thermal jets shimmering their way up from under the rocks we swam over. Luscious.

Bosnia and Herzegovina made its way into our wheel spinning travel here – through Plo?e into Mostar, a perfectly paved Ottoman city with a rocky past (for Kat’s article on some history of Mostar click HERE) 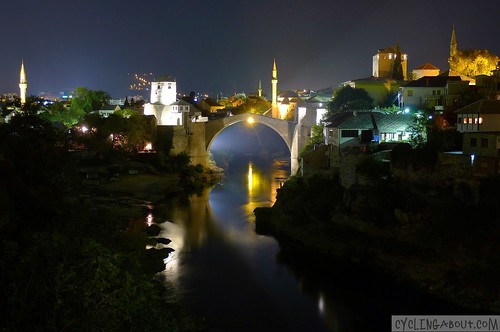 The Stari Most bridge, iconic worldwide. 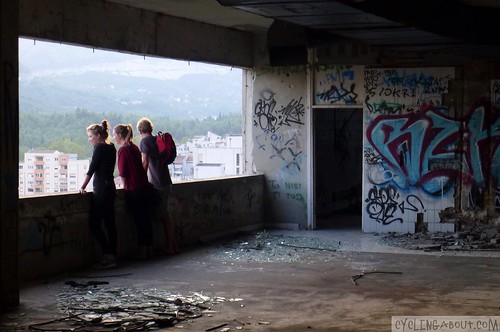 Climbing an abandoned building with Zianna and George 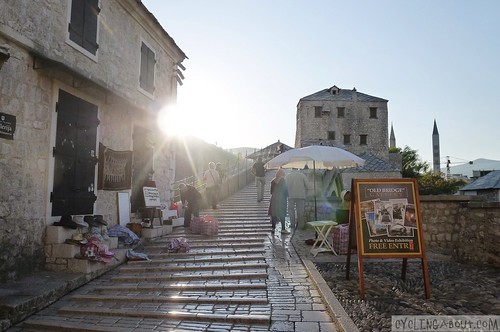 Looking towards the magnificent Stari Most.

The road into Mostar felt as though it was downhill (although it wasn’t), the sun shone on us throughout the journey although we rode through weird intensely cold patches in the road, as though we were ducking momentarily into a valley and back out. Here we re-met Zianna and George (read about the serendipitous reunion HERE), climbed a sniper tower, marvelled at the bulletholes punctuating the old city buildings, walked of the bridge, made a cyclingabout movie and ate baklava that wasn’t baklava.

On our way back out, evidence of the Mostari population effected by the recent war was thrust upon us – there is a lot of unemployment and erratic ‘crazy’ behaviour – by a man dragging a half-destroyed bed frame against traffic along the highway. The sight stayed with us but didn’t darken our return to Croatian soil where we made it (via another necessitated entrance and stay overnight into Bosnia & Herzegovina) to ‘the Pearl of the Adriatic’: Dubrovnik.

We had just crossed the suspension bridge (on the road) into Dubrovnik province when we noticed two things – firstly a cruise ship in the harbour that was large enough to count as an entire suburb of Dubrovnik and secondly (and more importantly) bike tourers completing the same crossing on the footbridge. We stopped to say ‘hi’ and offer help and soon we were firm friends with Amelie and Gabe, French Canadians from Quebec, and had organised some accommodation within a stones throw of one another. 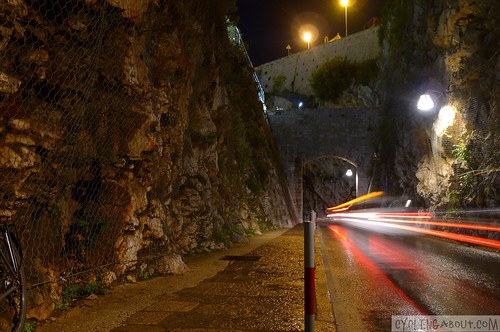 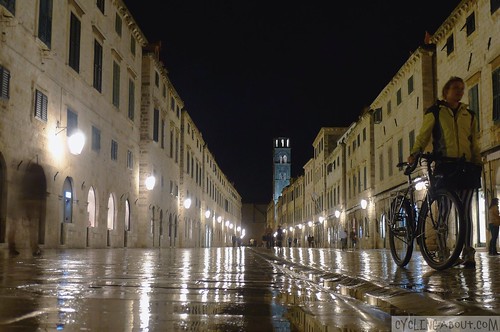 Dubrovnik is one of the most beautiful cities in the world. 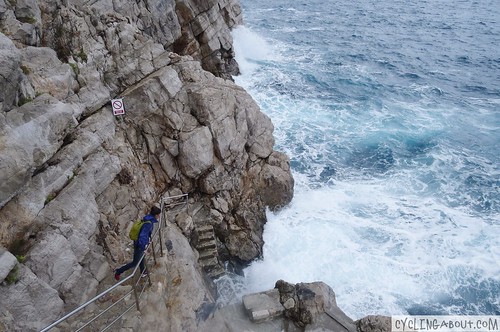 The coast around the old walls was not enticing during our stay! 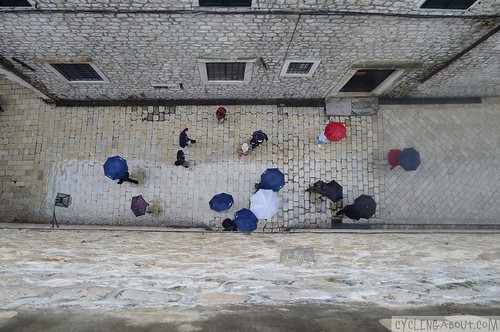 Looking down from a wall in Dubrovnik

The experience of Dubrovnik was something else; entirely enhanced by our new friends, we spent a lot of time together talking, cooking, drinking, eating ‘slow’ and ‘slightly-less-slow’ food, walking in and out of the rain, off and on the city walls, and enjoying the pearlescent beauty that Dubrovnik shines with. Amongst the streets and the stubborn numerous crowds visiting Dubrovnik in all unseasonal weather conditions, Alleykat made a movie in the rain about a little yellow jacket that could and convinced Amelie and Gabe to continue the journey to Montenegro as a foursome. 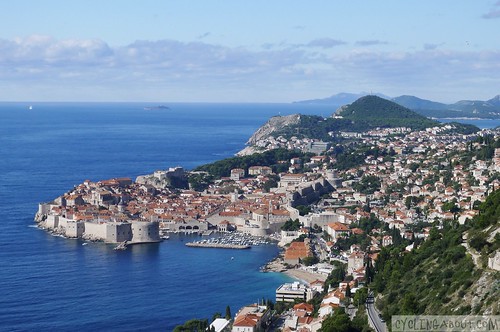 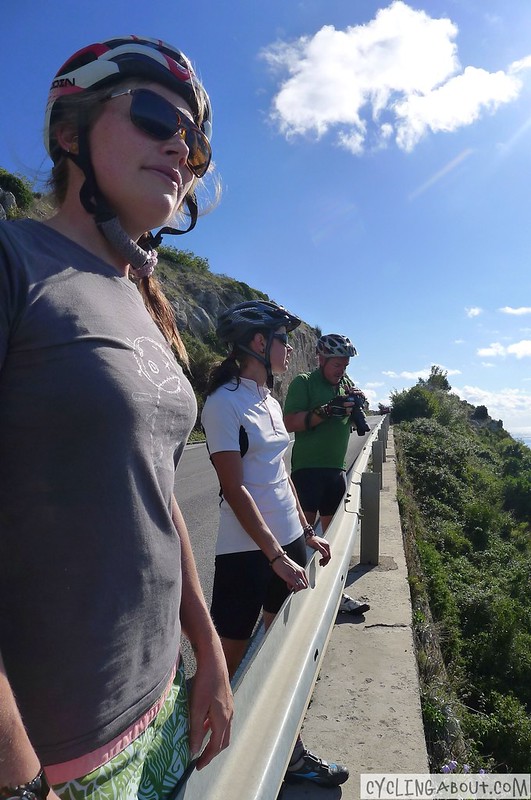