It is no surprise that a relationship will be struck with all kinds of blows when you spend close to every minute, of every hour, of every day with that person. When you're travelling with your partner you need to be incredibly considerate of their basic needs, which will compromise your very own basic needs at times. It is impossible to compromise all the time; it is important to look after your own sanity just as much as your partners. Defending your own basic needs is often the point where personalities battle it out, either strengthening or weakening relationships.

Alleykat thought about how we could best manage this in the list of agreements we set out before we left. We are keeping to some agreements and breaking others. The agreements we breach seem to not affect either of as at this time. We try to be as open and honest with each other as possible.

We thought it would be interesting for you to read about where our personalities struggle to agree with each other. 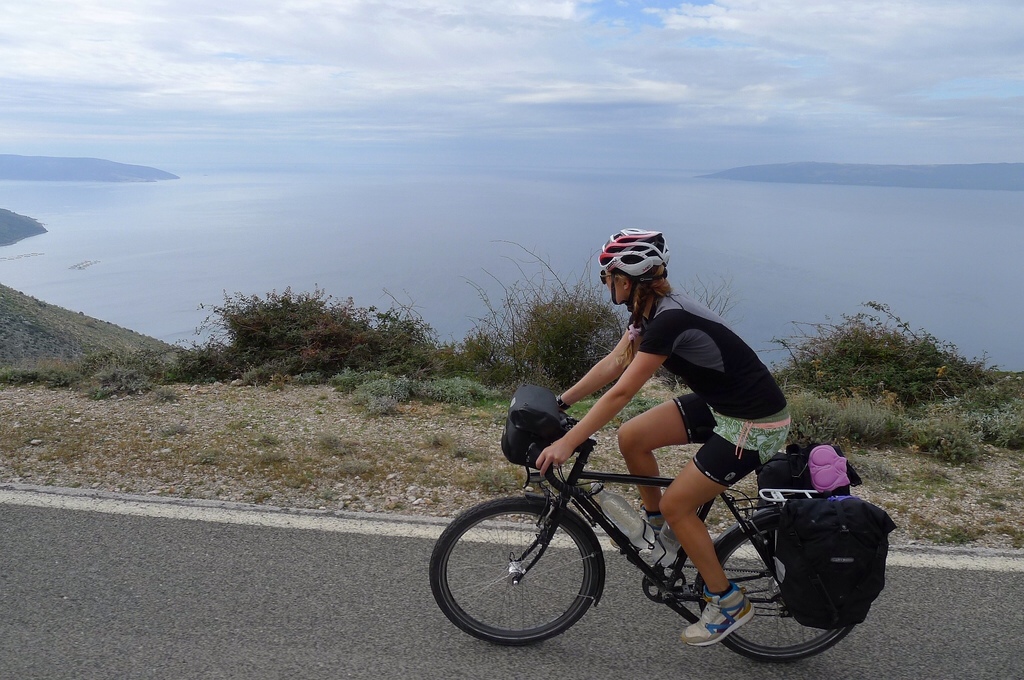 Scenario: Alex approaches Kat about her failure to inform him truthfully about how she is coping with the riding. Kat feels this is unfair because she is just trying to do her best.

The way I bluntly put it to Kat was that this point of contention could cause a relationship breakdown in the long-term.

Let me describe the relevant characteristics of Kat's personality for this situation. Kat: will do anything to make everyone happy, will not speak up when she has an issue, and will put up with more physical pain than her body should tolerate (to prove that she can do it). Kat is your typical over-achiever.

For cycling and bicycle touring these attributes are no doubt mandatory.

The issue is that Kat is riding unsustainably. She is riding faster and further than she should because she believes I will be annoyed if I have to ride too slow, or not far enough. She has unrealistic expectations of herself. This is affecting her physical and mental health, as she is not recovering properly and is every day suffering more than she needs.

For example, she rode the first ~1200km with fractures in her knee. Sure, she was unaware that it was as bad as it was, but she put up with the pain because she didn't want to 'ruin' the trip. It regularly occurred since breaking her knee, Kat kept trying to ride to suit me.

Kat's 'I'm ok' or 'I feel fine' could've been translated to anything from 'I'm having a lovely day in the sunshine' to 'I have a six foot metal stake through my skull'. I always made an effort to see how she was doing, but never got straight answer and I eventually stopped trusting what she was telling me.

This trip is about the riding, for sure, but cycling is just the means for getting from A to B. We don't count the kilometres, or try to average a certain speed. We have a general guide for where we want to be and when, and if something cool pops up, we stop. The very nature of the journey should foster, not inhibit Kat's ability.

We spoke about Kat putting up with pain more than she should, and especially with regards to how her repairing knee was doing. It boiled down to a few things: she felt she wasn't 'pulling her weight', she wanted me to be able to ride longer distances, she wanted to prove she could ride strongly consistently, and she was worried she wouldn't be fit enough for the times when we did have to cover certain distances.

The harsh reality is that Kat is the 'weak link', and no matter how strong she is riding, I will always be able to ride faster and further. I will ALWAYS be assisting her when it comes to the bike riding bit.

Alleykat is a team. The healthier Kat is physically and mentally, the better she recovers from every ride, the more time she has to stop, stretch, eat or rest – the faster and further Alleykat will be able to ride in the future. Kat knows how she is feeling, I do not. She needs to tell me when we should stop or how far we should go.

My solution was that we do hourly checks on her knee and use a number rating for the pain to track what it was actually like. This is hard for Kat to grapple with as butts directly with the various characteristics of her personality. Kat can see that it is completely logical to be transparent with each other, but deeply battles being the weaker rider.

After some discussion, I feel more in touch with how Kat is actually feeling, and I hope that logic prevails for Kat in this situation.

Scenario: Kat approaches Alex about the fact that he antagonises her when she is trying to be serious. Alex is frustrated by the fact that Kat snaps from a jocular manner to a serious and defensive manner, which from his perspective is without any prior warning.

This 'issue' stemmed from two conversations we had where I (Kat) was convinced we were having a serious discussion – indicated by the seriousness of content and deeper emotional undertones – but Alex felt that the conversation went from light and fluffy to dark and foreboding in an unfair way unable to be followed.

What we were talking about doesn't bare mentioning, it really could have been anything, only that sometimes I want to have a mature grown-up discussion and because I am so used to being able to flow in and out of these with relative ease I am surprised when Alex can't adjust and come along. Dispite his prowess at talking openly with me and his plethora of friends, despite his acute and sometimes surprising level of sensitivity to my real 'self' and the generosity he gives me, Alex loves to push my buttons and indeed those of many people. He does this of course, in a jocular manner: he has a very Australian love for 'having a go', exuding pithy or rude remarks, and balancing these by having fierce and cutting views on certain topics. The problem for me is that Alex sometimes doesn't have the interpersonal sensitivity to subtle changes in the needs of a conversation. He admitted this freely to me, telling me that he wished he could give me more and understand the extra level of care he needed to display but that it really just didn't make sense and he wasn't capable of understanding why some things just needed to be serious.

The solution to this is an easy one – it may feel a little false to me to indicate that I am being serious and need to have an open, frank and real conversation without the fear of having a button pressed at the wrong time but that's as simple as it is – if I'm feeling overly sensitive I just need to tell him and he is more than capable of adjusting his manner. It could be our boy vs girl differences, or simply the way in which we have learned to interact. It may seem obvious to me that my cues and topic are serious and need a bit of respect but it is also just as obvious to Alex that we often deal in a light, easy, happy tone and thus, things don't have to be black or white. Both opinions are true and the happy reality is simply that we need to allow for one another's needs.

We've since become much better at giving signals and being open and upfront.

Alleykat becomes no doubt stronger through the various sticking points we encounter. These personality battles may seem somewhat petty to you, but you have to understand that being together all the time turns the most petty into the biggest deal breakers. We don't want to argue or disagree, but at the same time we both know that too much selflessness can lead to just being Alex and Kat.

Being transparent with your travelling partner is, in our opinion, the healthiest way to be.

Interview with Kat: After Travelling for 16 Months

Tandem Trust, Trials and Tribulations: Panic Attacks on the Bike