This is part TWO of our Iran adventures:

You can catch part one, Caspian Iran HERE

You can catch part three, Iran’s Other Side HERE

Accommodation, you found us

Our friends Will and Selina were nearing Tehran, so it was time to get back on the road. We were stopped by so many Iranians insisting that we needed their phone number, their food or their water. A man named Saed, who spoke next to no English, told us that we would be his guests for the night in a nearby town. We didn’t have any plans, so we told him we would call when we arrived. Some kilometres further we were passed and stopped by more familiar faces: the couple-bravely-moving-to-Australia we’d met in Talesh! They were on a 1300km drive to southern Iran to visit their family, and so of course invited us to come along to their home in Kerman. We regretfully declined.

We arrived in Saed’s town Manjil which we can guarantee is the windiest place in Iran – it almost blew us off our bike! Luckily some engineer type had recognised the energy potential from this region, so installed regally in the hills and valleys were hundreds of wind turbines. Saed brought us to his non-English speaking family house where we were pampered with lots of food and love. We were communicating quite well with our hands, feet and grunting skills, but luckily the night was saved by one of Saed’s friends who spoke some English and got some of our vital points across. Saed and his friends took us ‘hooning’ about the town, loud music informing everyone within 10km that we were having a good time. In a rather non-sequiturial fashion, they also brought us to visit the oldest, largest tree in the city, hooning nature-lovers.

Thirty kilometres into our next day a man stopped us at the side of the road, introduced himself as Mohammad, after one minute of casual conversation told us about his holiday house in the hills behind us saying he’d like to show it to us, he could drop us off exactly where we stood just one day later (or wherever we wanted) in his van with TanNayNay inside and asked/told us ‘if you’re ready, lets go’. We pondered for all of thirty seven seconds and said ‘ok!’, loaded TanNayNay into Mohammad’s van and began the hour and a half long incline to Damash, a little town nestled atop the mountain. The views were incredible – especially viewed in panoramic fashion from the back of the van facing backwards. Lucky Kat!

Hiding in the Mountains

At the top of the mountain, we three walked around like old friends. Mohammad serenaded us with traditional Persian songs and demonstrated his gentle jovial side. Mohammad has an affinity with plants and had us fascinated by the flowers unique to Damash (the world’s rarest flower, Lilium Ledebourii, which only flowers for a week each year) and tasting some wild herbs, flowers and lettuce – which we nibbled casually on plants grazed from the side of the road. We visited Mohammad’s friends, a mountain family who live very traditionally and make their own amazing cheese. We were again pampered with delicious food as the rain pitter-pattered on the roof. 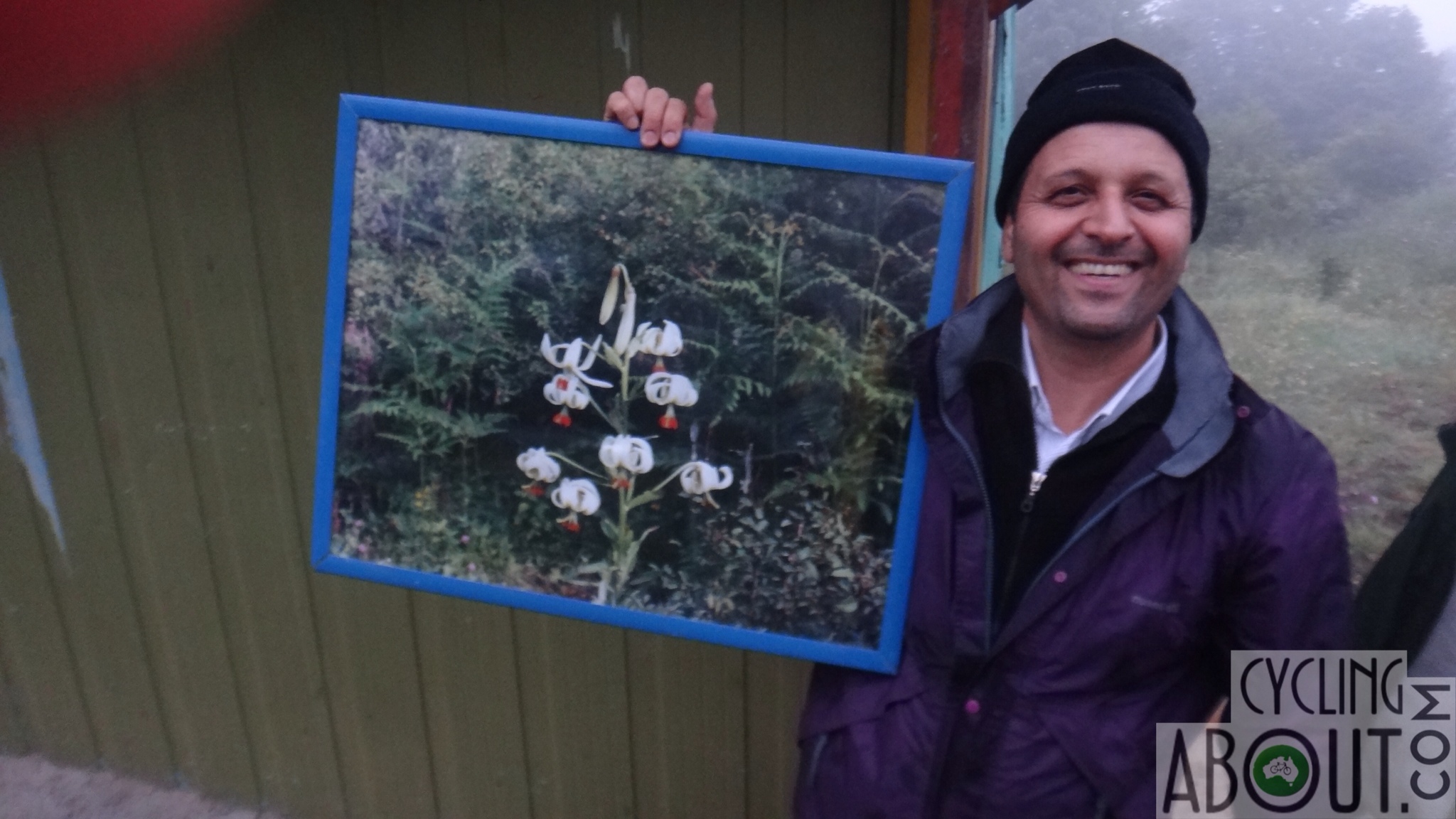 We returned to a slow cooked meal: vegetarian chicken. Despite most Iranians understanding that Kat is vegetarian, they often assume that she eats chicken and fish, because who doesn’t eat these?! Mohammad told us about building his own home in this mountain village, something he’d always wanted to do when he was sure he had found the most beautiful place in Iran.

As it was quite literally ‘homemade’, it wasn’t always safe. He told us that sometimes things go wrong, like the kitchen bursting into flames a week previous because of a dodgy gas cylinder. We found out about the secret way of Iranian sleeping (the heater table: a heater under a table with blankets trapping the warm air in) and slept comfortably but with a slight whiff of natural gas in the air.

The next morning, still unable to see the mountain top mere metres from our hut there was a loud rushing sound and Kat figured the gas bottle was broken. She called Mohammad inside and within seconds he’d run outside with the lit gas heater and had closed the faulty tap on the gas bottle. We’d managed to avoid a repeat of the exploding gas bottle fire disaster of the previous week – go team! Mohammad was convinced of divine intervention. Regardless, we scientific folk felt very lucky indeed.

We left Damash the long scenic way, driving an extra 100 kilometres, finding ourselves shooting out of the backside of the mountain, back before the place we’d had lunch two days previous. It made us laugh to re-do the road; how quick cars are but how much less of the road you experience. We’d decided that the best plan of attack for fixing our broken wheel was to arrive ASAP in Tehran, so we took Mohammad up on his offer and came with him to his home. We met his son Sina, his daughter Soha and his wife Fariba and immediately felt our decision was a good one. We stayed a few days here, taking advantage of their home’s proximity to some of the embassies we needed to procure visas from in the next short while.

After finding the Uzbekistan consulate, we met some French walkers, who are walking around the world for the next ten years. Kat was initially convinced we’d all met but then the crux of the matter came to mind: shared hosts – she’d seen videos of them at Sam’s place!! After a good healthy chin wag they scared us deeply about our hopes of extending our Iranian visa, saying they’d been told to get out of the country and that they hadn’t met anyone (not walker nor cyclist) in the past month who’d been able to get a visa extension because of the upcoming June 14 presidential elections. Our throats closed over, making small chocking sounds – with mere days left on our current visas and fixed dates to be in Turkmenistan and Uzbekistan we couldn’t really handle this hiccup. We managed to get our Uzbekistan visa right there and then but left the embassy with a feeling of mild asphyxiation about us.

We decided that night we would just go to some-country-else and perhaps travel directly to Uzbekistan from this other country to satisfy our visa dates. We placed an advertisement on social media with the choice of three destinations: Baku (Azerbaijan), Trabzon (Turkey) or Dubai (UAE) in each country we could stay with good friends; old and new. People voted and commented including our good Aussie/Swissy friends Will and Selina (of GroundWay fame) who noted they’d just been to Shiraz and were OFFERED an extension at the office of Alien Affairs without even asking. That buoyed our spirits somewhat and forced us into action: maybe the Frenchies were wrong? After leaving Mohammad’s place without the majority of our luggage and with the intention of returning at a later date, we set about attending the Alien Affairs Office in Tehran where it turned out we could get a visa extension if we were prepared to wait 10 days or we could go to “any touristic city” and get this important stamp in hours. Some weight walked off our shoulders.

Going Groundway with Will and Selina

Will and Selina were a sight for sore eyes: brown from their trek along the Lycian Way in Turkey and the sun in Southern Iran; we hugged hard and long. How wonderful; to be able to reunite once more, creating a lovely sense of home, no matter what the situation or location is.

We used public transport for the first time in a long while and hung out at the Iranian Artist’s Forum, surrounded by kittens, invasively inquisitive Iranians and sunshine. We watched a new friendship blossom between two young men both intent on protecting the poor kittens from a group of overly enthusiastic kids without adult supervision and without any sense for the cats being sentient, feeling beings. The whole thing made us purr. We later dined at the vegetarian/vegan restaurant inside the gallery and talked the night away.

Our next stop was a new experience for us Alleykats in Iran thus far: the youth of Iran, who lived in a share house, studied at university, turned up to their military service slightly hung over, had couchsurfers (illegal in Iran) sleeping on every available floorspace and invited us in for a naughty drink (illegal in Iran!) and a late night dance (also illegal). The morning call to prayer was our lullaby at 5am but a few hours later we scraped ourselves off the share house living room floor and spread ourselves onto a bus to Kashan.

Kashan was a place for soft ice, adoptive friends, white lizards on not-so-white walls and a lot of building on solid friendship foundations. We ventured to Abyaneh, an ancient red village. We picnicked with hundreds of other Friday tourists (Iran’s weekend is Thursday and Friday remember) and wandered around. We were the only visitors at the fort on the hill, swathed in silence until the longest and most collaborative call to prayer sang out silkily splitting the silentium and a little bent old lady shimmered in the heat, mirage-like in her wavering efforts down the hill.

We purchased bus tickets from a tour group at eyebrow-raisingly high prices and jumped in an employee’s car to make the very near departure time for Will and Selina. There was a sea of sad farewells, but we were all buoyed at the prospect of future rendezvous. We waited for hours for our bus but it turned out that the tour group operator took 5/6ths of our money and booked us on the cheapest of the cheap rides to Shiraz! We were pretty annoyed with our 11 hours of sleepless upright horrible travel and dodgy bus driver (on phone, taking pictures, watching TV, drinking chai) and 4:35am time of arrival… we thought longingly of TanNayNay.

In Shiraz we went straight to the Alien Affairs Office to sort out the necessary visa extension required to bridge the dates to our Turkmenistan entry. Success – our dates were covered for only a few dollars. On top of this we found a super cheap, clean dorm room with eight beds to ourselves!

Shiraz was street food: freshly made felafel sandwiches, banana milk smoothies, melon juice, carrot and ice cream combination. It was lopsided buildings, which was may have been deliberate or indeliberate. Tradition in Islamic architecture shows that only Allah can achieve perfection, humans mustn’t even attempt it! We spent a lot of time in Shiraz’s gardens, which are bright green despite the city being in the middle of a desert. A popular attraction for Iranians in Shiraz is the Tomb of Hafez. Hafez the poet is an Iranian folk-hero – loved, revered and as popular as many a modern pop star. Almost every Iranian can quote his work, using it to ‘understand’ or ‘read’ their future.

Persepolis embodies the great successes of former empires in the region. The grandeur of the gigantic statues, staircases and columns leaves no room for doubt of sheer dominance in this city’s heyday. The architectural styling of Persepolis is truly international, although the Persian elements really show through. On the day we chose to visit, it was free to enter for some reason or another! 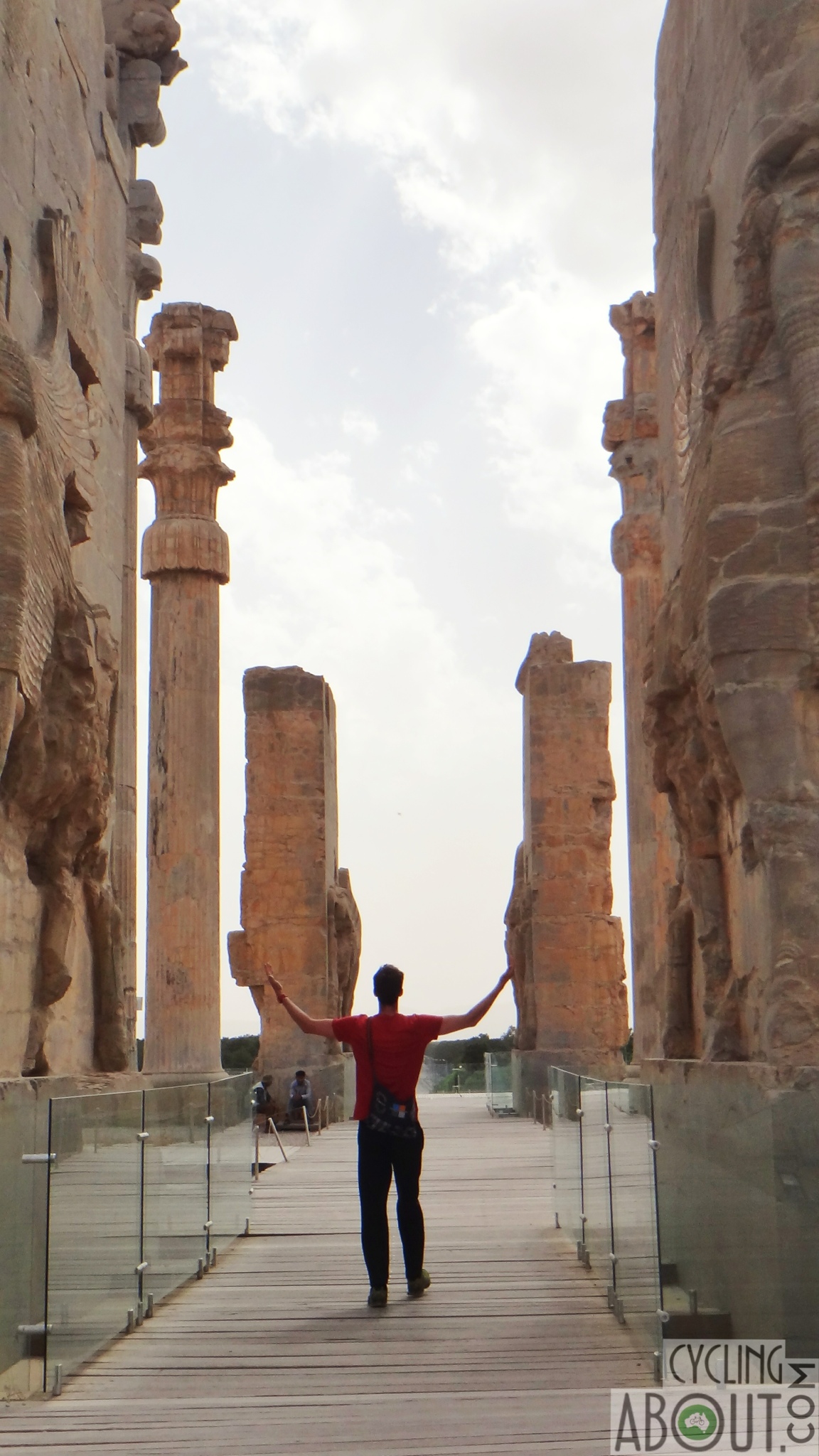 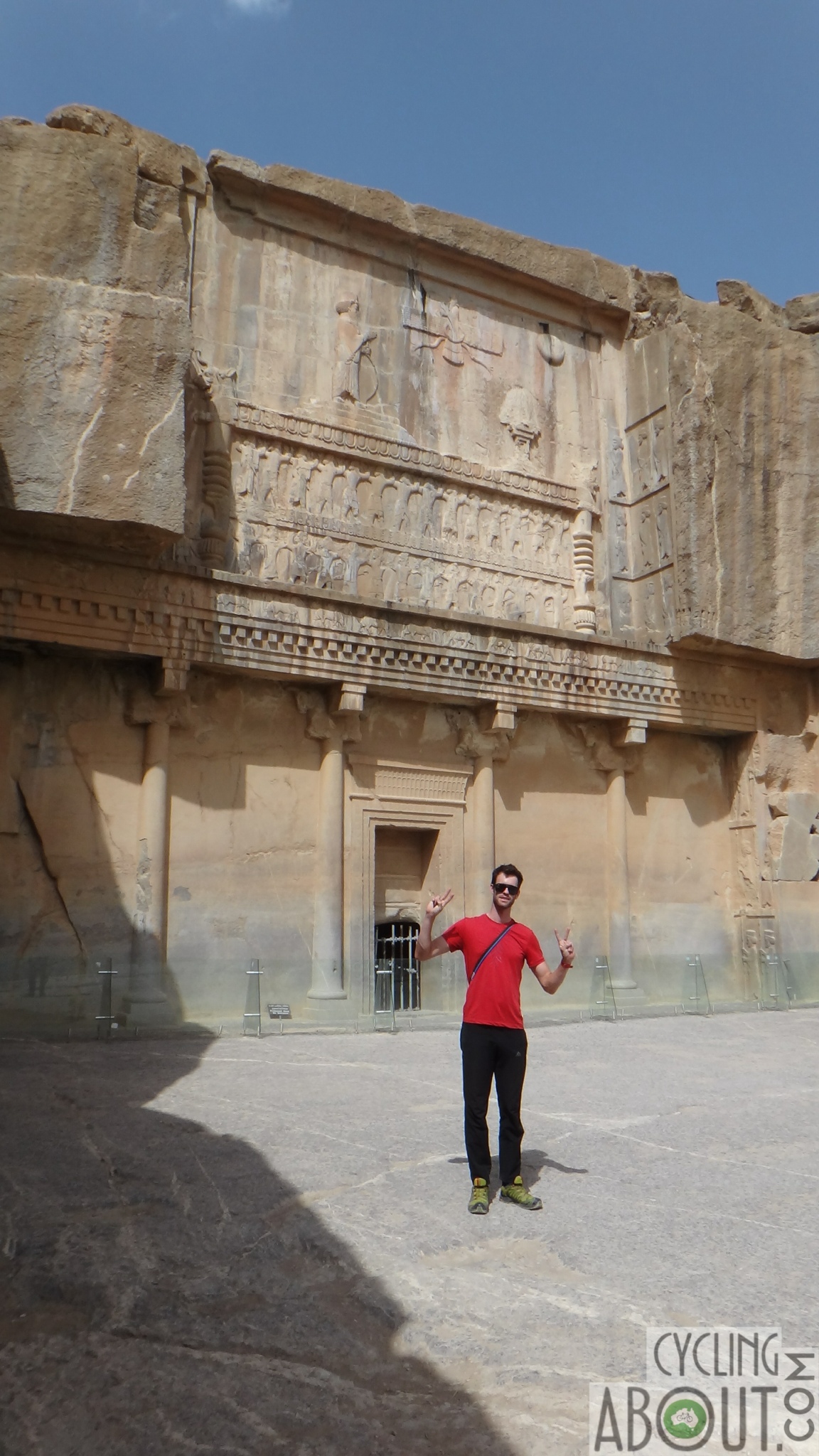 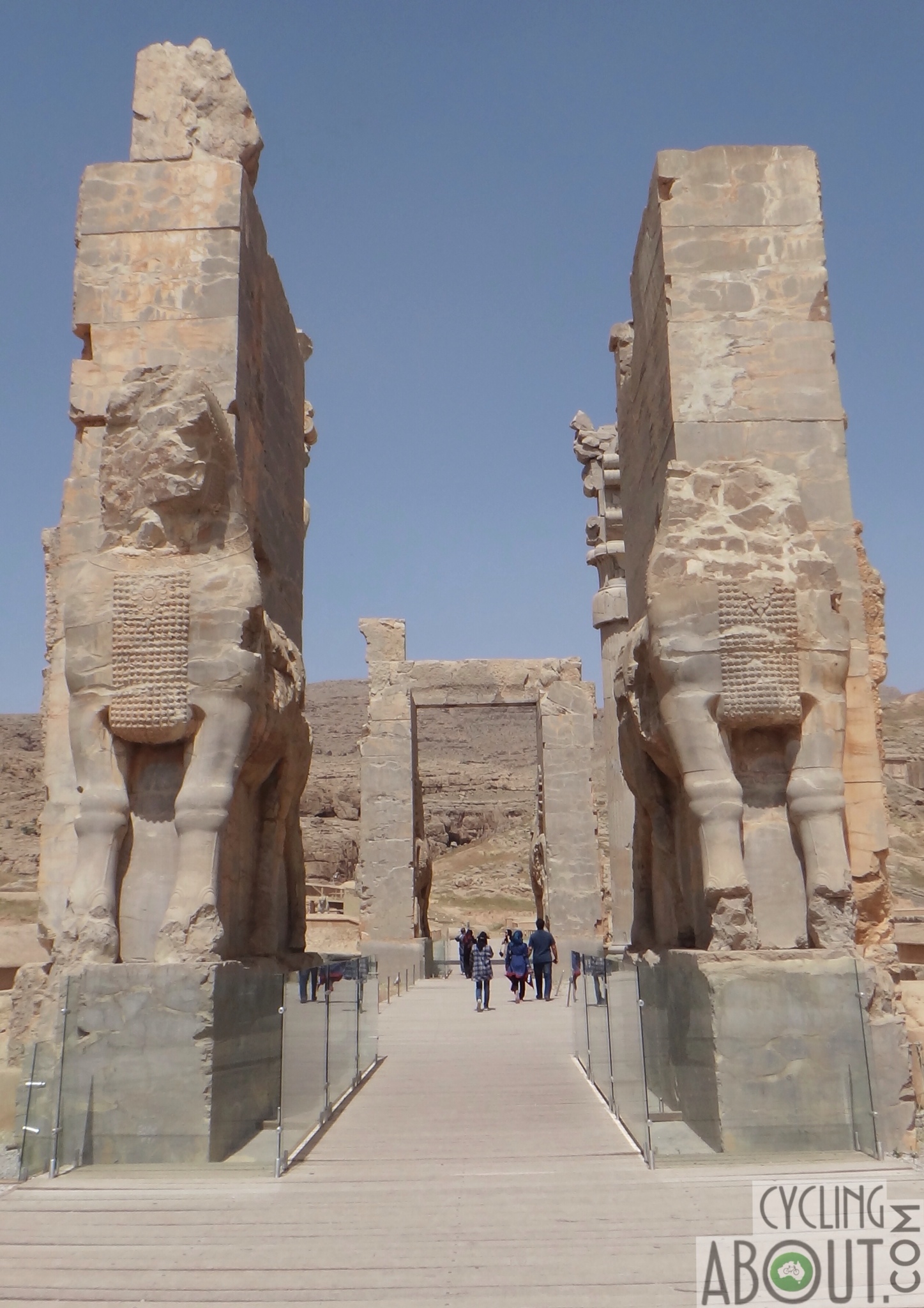 Don’t forget to catch our video on Iran!

Read all of our Central Asian Series!

⇒ Track 8: Iran’s Other Side