Shimano recently filed a patent for a new 13-speed gearbox, and in this article, we’re going to talk about why this is awesome, how it works, how much it will likely weigh and how efficient it could be.

But first, a little on gearboxes.

We’ve seen dozens of crank-based gearboxes over the years, but currently, the Pinion gearboxes are the standard to beat. However, let’s not forget that internal gear hubs are gearboxes too – and the Rohloff hub is the gold standard in terms of both efficiency and weight.

The Shimano Gearbox patent application actually reveals a huge amount of information about this gear system. It includes the gear ratios, the cog sizes, the lubricant ingredients, the shifting mechanism, the gearbox-specific chain, suspension details and more. This doesn’t mean it’ll ever see the light of day, but given the level of detail in this patent application, I’d confidently bet that this is more than a concept.

Shout outs to Jack Luke at BikeRadar for picking up on this patent application! 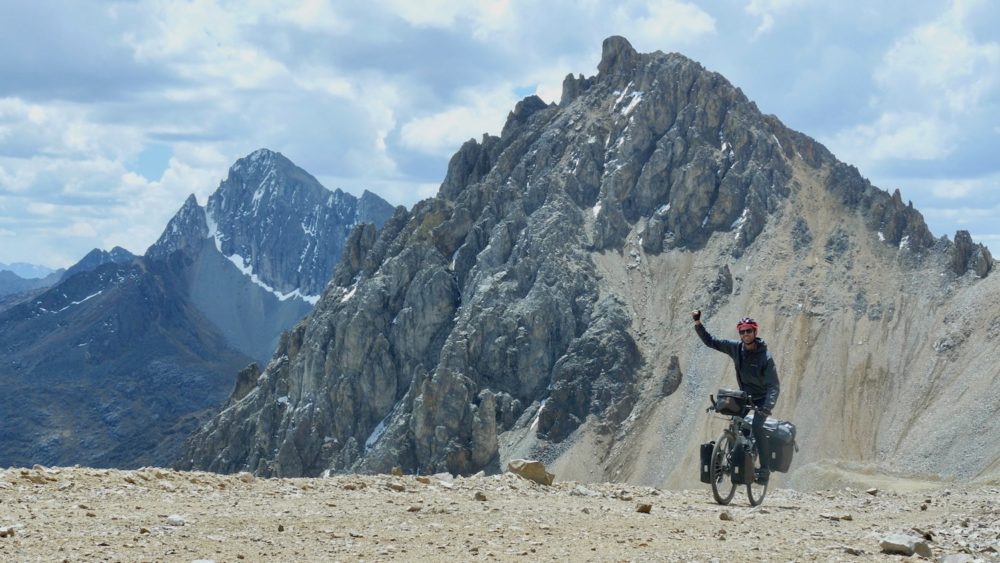 I can tell you because I’ve been travelling around the world on a bicycle with a gearbox hub for over 10 years, and in that time have covered well over 100,000km.

I absolutely LOVE having a fully-sealed gear system, which is impervious to the mud, grit, dust, snow and sand that I plough through. Even in horrific conditions, my bike requires almost zero maintenance and few replacement parts too. The gearbox hides the usual delicate drivetrain components out of harm’s way, and with the wide hub flanges, my rear wheel is built stronger than a cassette wheel too.

For mountain bikers, a crank-based gearbox makes the most sense, by centralising weight on the bike and reducing the unsprung mass at the rear wheel – you can improve the overall suspension performance.

Let’s get into some of the main talking points of Shimano’s new gearbox.

1. The Shimano Gearbox Is Going To Be B-I-G 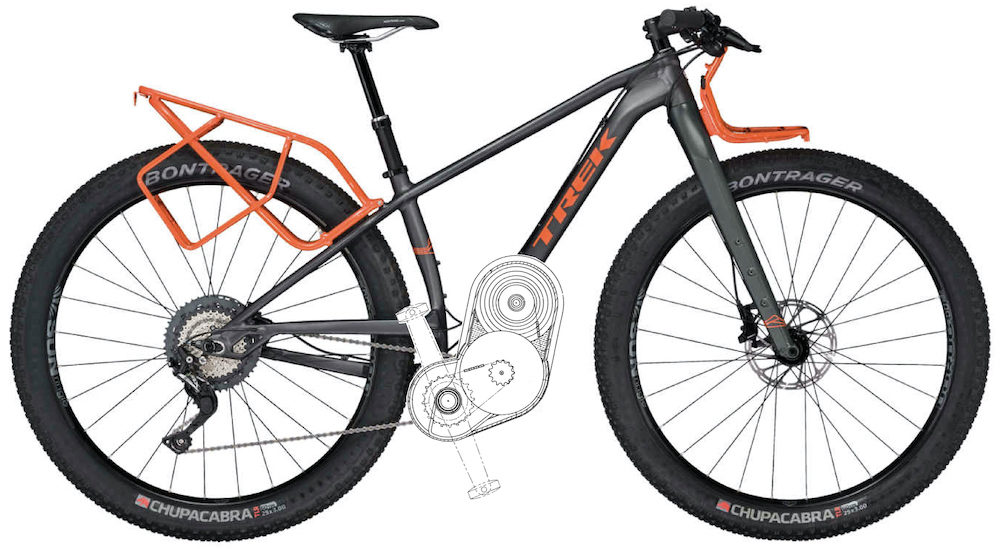 Volume big, that is. The bulk of the Shimano Gearbox is taken up by the opposing seven-cog cassettes with 19 to 41 tooth cogs. Once I appropriately scale the gearbox onto a bike, you can see it will take up a heck of a lot of space!

2. The Gearbox Will Require A Specially-Designed Frame

With that large gearbox volume, it’s going to need a different frame cabinet to anything currently available, but this likely won’t be an issue as Shimano has enormous sway in the bike industry. You can see that Shimano expects their gearbox to be mounted inside a frame sleeve, which would also make the most sense structurally. 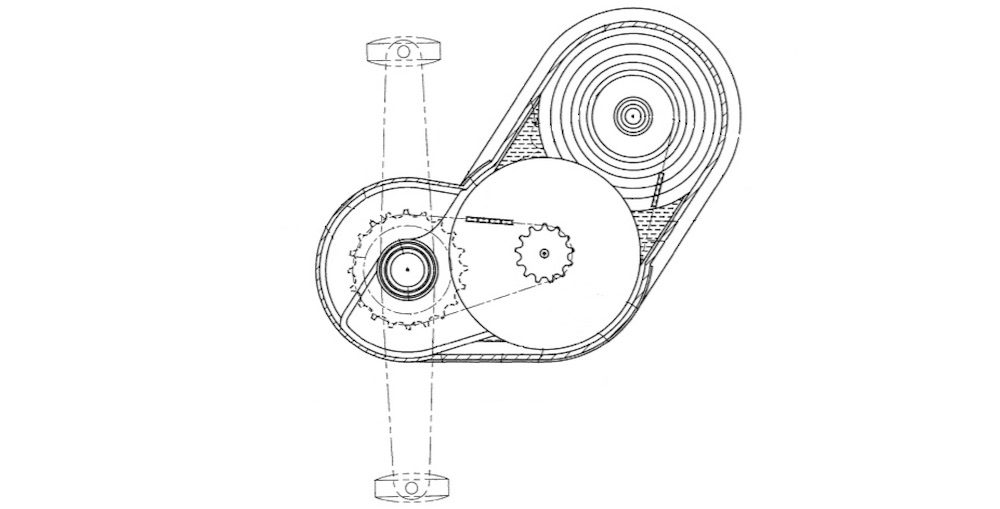 The Shimano Gearbox will have a high gear that’s 4.7X harder to push than its easiest gear. This is a smaller gear range than the Rohloff hub at 5.3X, the Pinon gearbox at 6X and the current largest Shimano cassette at 5.1X. This simply means that the range of speeds at which you have the right gear ratio is reduced.

Comparing the steps between each individual gear, the Shimano averages 12% while the Rohloff uses 13.6% and the Pinion 17.7%. That means, on average, each gear will feel closer together than other gearbox systems. However, unlike most gearbox systems, these steps are uneven throughout the gear range (9.7-16.2%), making gear changes feel a little less predictable.

4. It Uses Roller Chains, Not Planetary or Spur Gears

Roller chains and cassettes are very simple to produce and assemble, allowing for large-scale manufacturing at a low cost. This is undoubtedly the biggest advantage of the Shimano Gearbox over the competition. Compare this with a Rohloff Hub which has over 150 individual components (PIC) and a resulting high price (US $1700+) – and it is easy to understand why gearbox systems haven’t yet made it to the mass market yet.

5. There Will Be Electronic Shifting 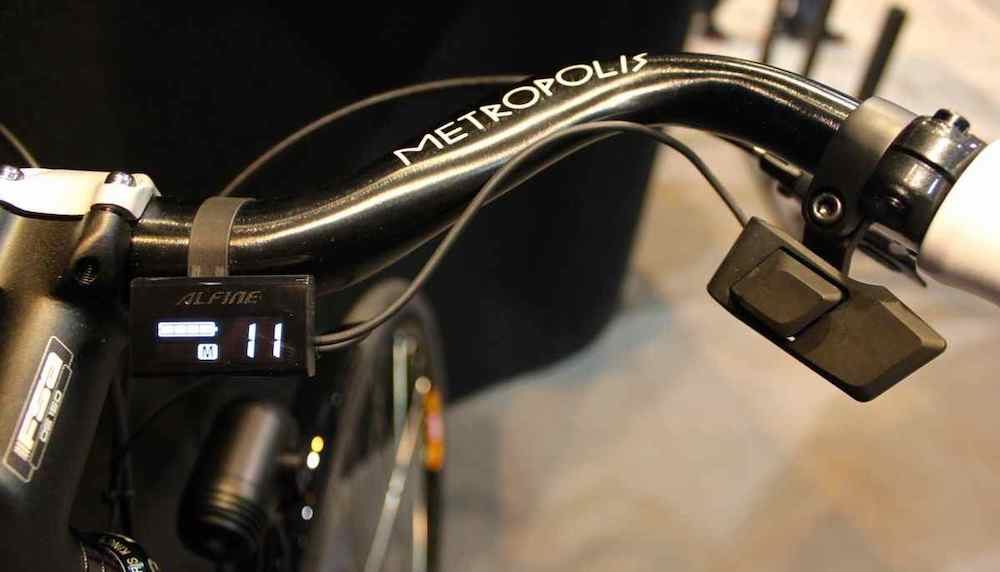 The patent application talks about both electronic and mechanical shifting. Shimano has proven themselves very adept at the design and manufacturing of electronic components, so this we can expect the execution to be flawless with both drop bar and flat bar shifters.

6. The Shimano Gearbox Is NOT Intended For E-Bikes 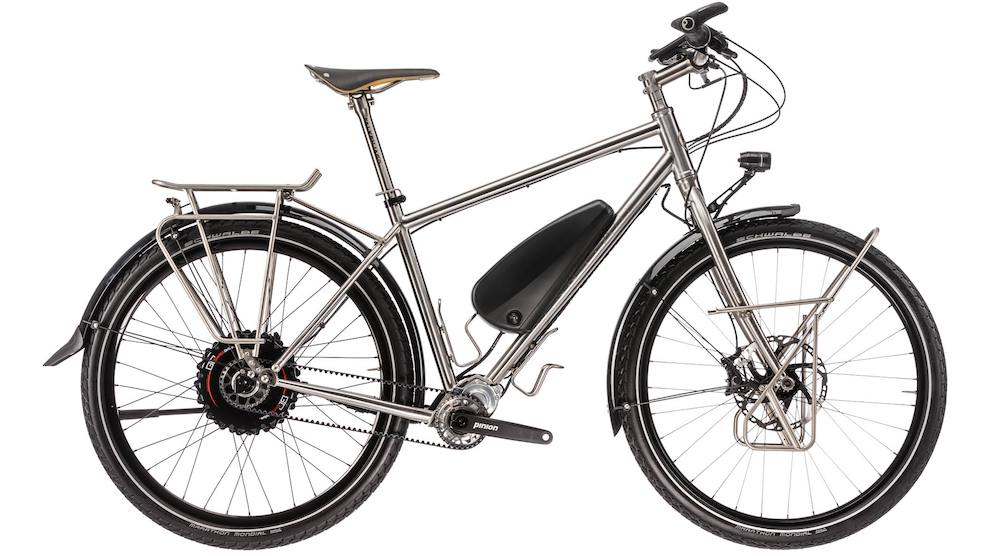 Given there are relatively small steps between each gear ratio, plus the fact that the majority of electric bikes now use mid-mount motors – this gearbox has not been designed for eBikes, and the system has no room for motor integration either. That said, this doesn’t mean you can’t have a Shimano Gearbox eBike. The GoSwissDrive rear hub motors are currently very popular amongst Pinion gearbox eBike manufacturers.

7. This Gearbox Could Come Soon

The patent application shows very advanced designs, rather than just simplistic ideas. It’s clear Shimano has been working on this for a while, and I’m certain they have working prototypes hidden at Shimano HQ. The key challenge will be in working with the big bike manufacturers to roll these gearboxes out smoothly.

Ok, So How Does It Work? 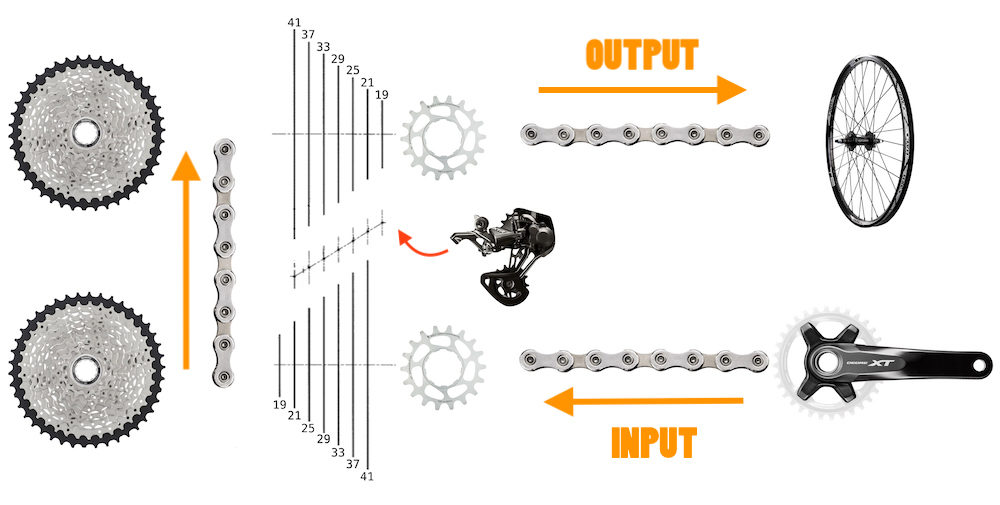 It’s actually quite simple, and I can use regular drivetrain components to describe it.

The gears are changed using a derailleur mechanism located between the cassettes, which will move diagonally along an angular shaft. The first cassette will move side-to-side, but only the distance of one cassette cog. It’s best to visualise this in action at 5:37 in my Shimano Gearbox video. 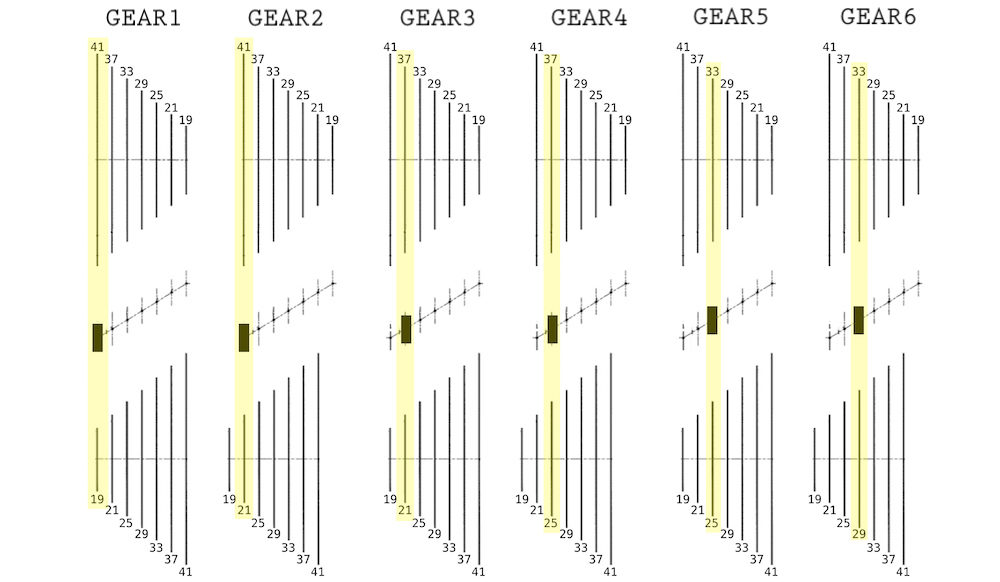 This gear system is pretty cool because the chain is always aligned, which maximises drive efficiency. It also achieves 13-speeds within a very narrow gearbox width – typically the number of cassette cogs determines the number of speeds in a chain-driven gearbox.

Gear changes will NOT be instant like those on a Rohloff or Pinion gearbox, but you will be able to shift under a load. The system will also run inside a sealed oil bath, enduring maintenance and replacement parts are at a minimum.

Ok, it’s time to do some speculating! 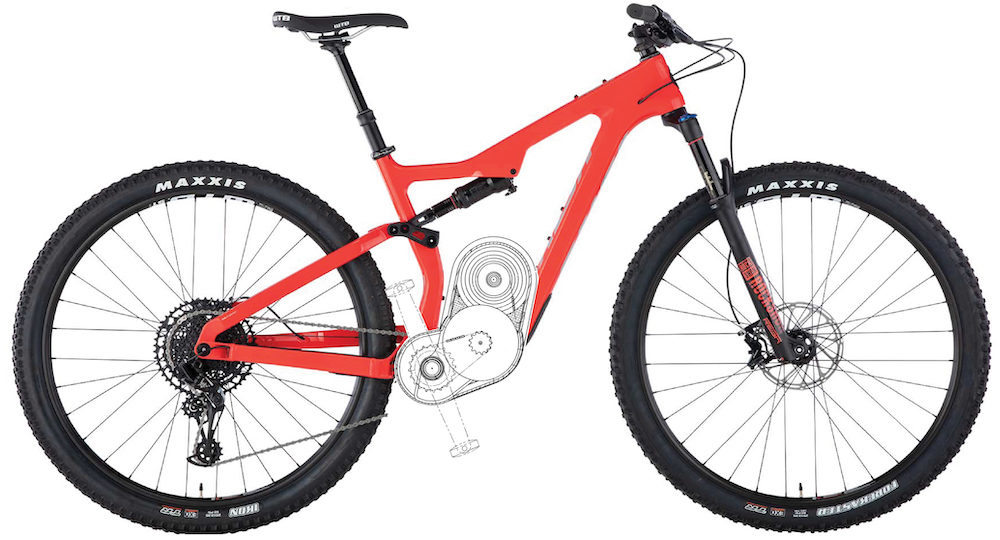 A typical 1X drivetrain hits the scales at 2273 grams. When we add a 2X front derailleur, another chainring and another shifter, this adds about 400 grams to the total. The lightest gearbox currently available is the Rohloff, which weighs in at 3125 grams and the Pinion C1.12 is not much heavier at 3310 grams.

By adding up the approximate weights from the various drivetrain components required to build the Shimano Gearbox, I’ve estimated it could be the same weight as the Rohloff drivetrain, and possibly lighter than a Pinion too. But really, there won’t be much separating all three. The only clincher is that frame cabinets for gearboxes definitely add weight to a bike frame, resulting in a heavier overall bike.

Drive Efficiency of the Shimano Gearbox 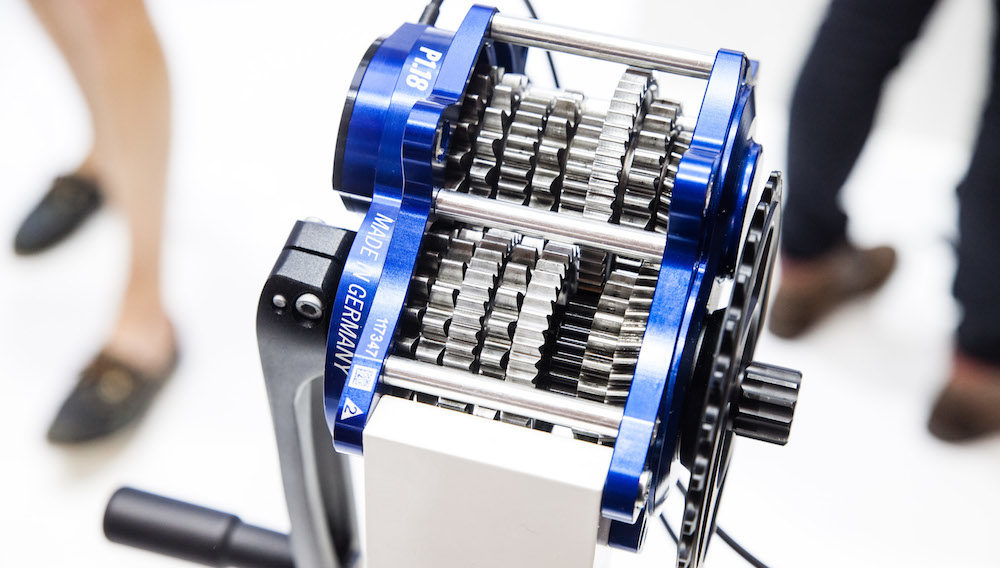 Moving onto drive efficiency, can this system match the high rate of efficiency of a Rohloff Hub?

Let’s see, even when accounting for the straight chain lines, there could be as much as 3-watts lost on each chain (x3), the derailleur pulley will lose about one watt, and there are a few extra sets of bearings at each of the transmissions. My napkin maths brings us to ~89% efficiency, which is significantly behind the 95-96% of derailleur drivetrains (HERE), the 94.5% set by a Rohloff hub (HERE) and the 90.5% of a Pinion gearbox (HERE).

That said, as part of the same patent application, Shimano has written in length about lubricating agents including a “fatty acid containing a carboxyl group”. The graph they’ve included shows the friction coefficient could potentially be halved.

In the patent application, Shimano has also shown a unique gearbox-specific chain design which is purposely sheared down to accumulate lubricant between the chain pins and link plates. This should reduce friction for the two chains inside the gearbox.

But even with these measures, I think you can expect only minor improvements to the drive efficiency. I’d suggest the best-case would be efficiency numbers running into the low 90s, matching the Pinion gearbox, but the Rohloff benchmark of 94.5% seems unlikely.

Will The Shimano Gearbox Be A Game Changer? 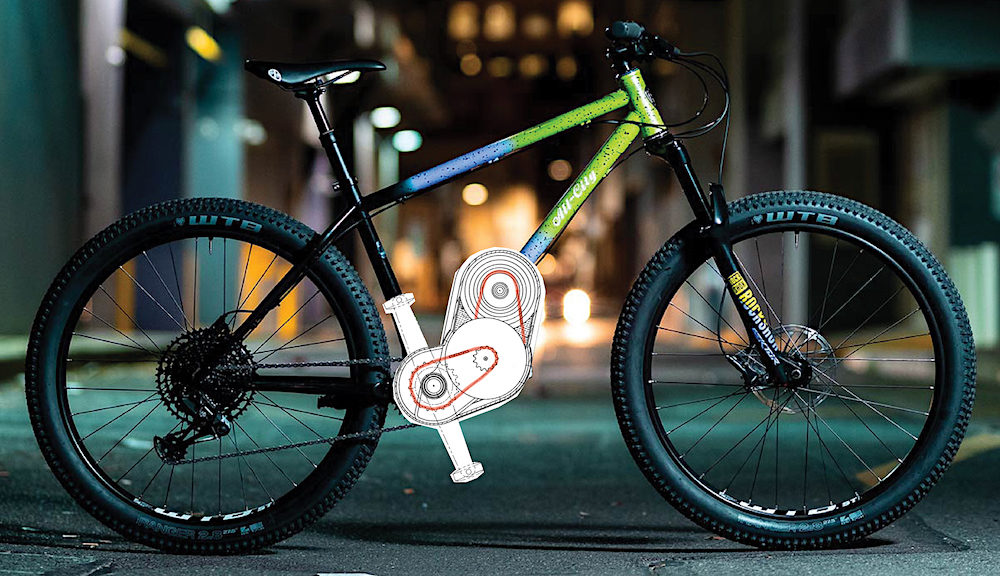 Given that most components for this gearbox are already mature, that the gearbox will be relatively simple and cheap to manufacture, and that Shimano has some of the biggest pull within the bike industry – and it is looking pretty damn likely that this gearbox will be a game-changer if it arrives.

I can see this system rolling out on urban and touring bikes that require low maintenance drivetrains, but equally, it’ll be great on mountain bikes that can benefit from the centralised weight and reduced unsprung mass.

Don’t expect the Shimano Gearbox to be as light or as efficient as a derailleur system though – it won’t be, but it could fall somewhere between the Pinion gearbox and the Rohloff hub. Compared to a 1X drivetrain, you can expect this gearbox to add more than a kilogram to your bike, but that won’t matter when drivetrain maintenance becomes a thing of the past.

Personally, I think the gearbox could do with more gear range – somewhere around 550% would be perfect for bike travel – but hey, if Shimano needs someone to test their gearbox on a bike ride across a continent or two, I will happily put my hand up to push it to the limit.

Are You As Excited About The New Shimano Gearbox As Me?!