The most efficient bicycle chain runs in a perfectly straight line, in fact, a drivetrain without gears (singlespeed) can operate with 97% efficiency. The result is that 97% of the power that you put into the pedals goes into driving your rear wheel. When we add derailleur gears to a bike, the chain has to bend in a number of ways as it moves through the cogs on the cassette, increasing the frictional losses and reducing the overall drivetrain efficiency.

With the advent of wide-range rear cassettes (eg. 10-42 or 10-50t) we have been able to eliminate the front derailleur while maintaining a similar gear range. 1X drivetrains are a great way to drop some weight from your bike and reduce the amount of maintenance required. We have also been able to design bicycle frames with greater tyre clearance when we don’t have to accommodate for front derailleurs.

One of the bigger disadvantages of 1X is that it requires the chain to bend at a greater angle to access the biggest and smallest rear cogs. This not only increases the chain wear but also results in additional frictional losses. In comparison, a 2X drivetrain allows you to maintain a straighter chainline as you can pair your small chainring with larger cassette cogs, and large chainring with smaller cassette cogs.

So, how much higher are the 1X frictional losses when compared to a traditional 2X drivetrain?

In May 2019, VeloNews and CeramicSpeed tested the frictional differences between 1X and 2X drivetrains. Let’s take a look at their testing protocol, their results and then I’ll do some number crunching to determine how these frictional losses will affect your cycling speed. 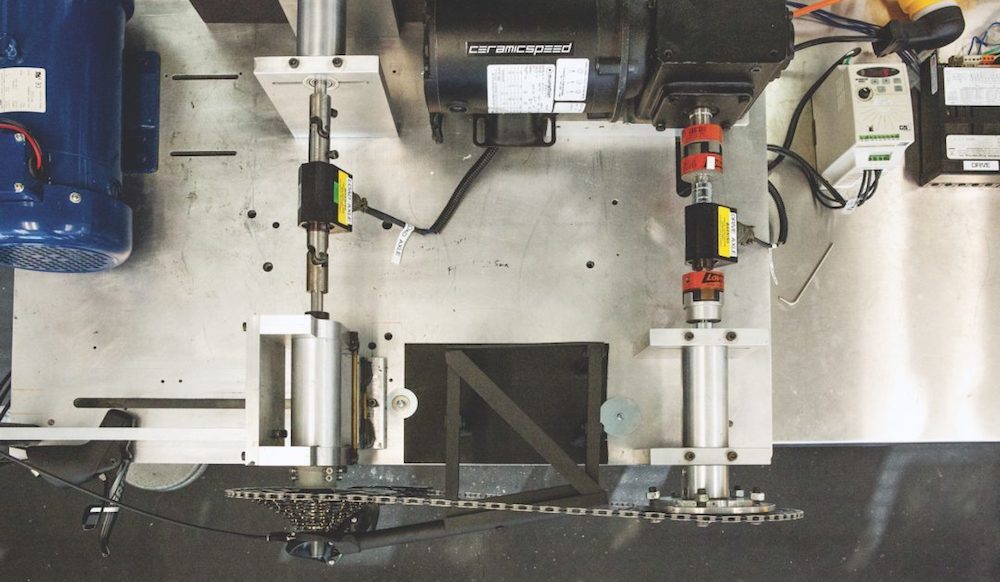 The CeramicSpeed test machine set up with the 1x drivetrain. Image: VeloNews

CeramicSpeed also stripped the factory lubricants and re-lubed them with the same mineral oil. Both chains were run for the same test duration.

Note: CeramicSpeed has previously found no increase in friction when using 1X narrow-wide chainrings when compared to uniform tooth 2X chainrings. They have also found no difference between the derailleur pulleys. 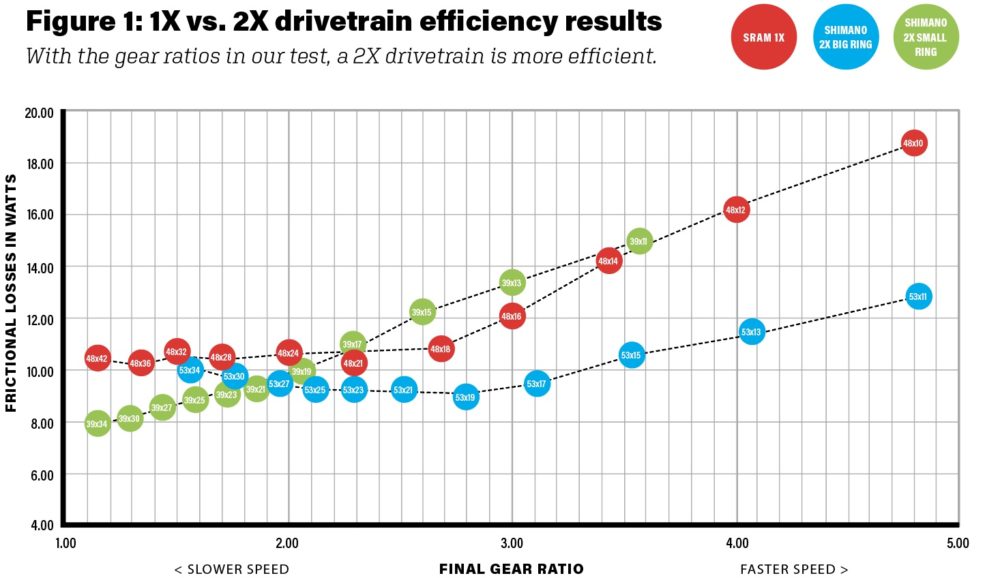 CeramicSpeed calculated that the average friction for the 1X drivetrain was 12.24 watts. This was determined by adding together the drivetrain power losses in each of the 11 gears, then divided by 11. The same was done with the 2X drivetrain using the 15 optimal gears divided by 15. The result was 9.45 watts, or just under a three-watt average difference between the two drivetrains.

Why Is 1X Less Efficient Than 2X?

There are four main sources of frictional loss in a chain. The obvious one is the chain bend angle, which results in the chain plates scraping harder on the cogs. But the chain tension, chain link articulation and chain speed also play a key role.

Chain tension results in the chain pushing harder on the chainring and cog teeth, and it’s higher when you use smaller chainrings and cassette cogs. Chain link articulation is the amount the chain has to hinge at the pins, where wrapping on a smaller cog causes higher friction. The chain speed is the tooth interactions per minute, which increases as the chain runs on the smaller cassette cogs.

These additional factors help to explain why in the gear with the straight chainline, the 1X drivetrain is still consuming 2 watts more than the 2X. It also explains why the 48x21t gear has the lowest friction despite the chainline not being perfectly straight – the reduced chain articulation and lower chain speed is yielding more friction savings than those from the straighter chainline.

What Is The Speed Difference Between Drivetrains?

Using BikeCalc we can determine the speed a bike will travel in each of the gear ratios by plugging in a cadence of 95RPM with a 700x44C wheel. We can then add the different rates of power (231 to 242 watts depending on gear ratio) as well as a rider+bike weight (85kg) into Bike Calculator* to find out the speed and time differences over 100km.

How Does Derailleur Drivetrain Efficiency Compare To Gearboxes? 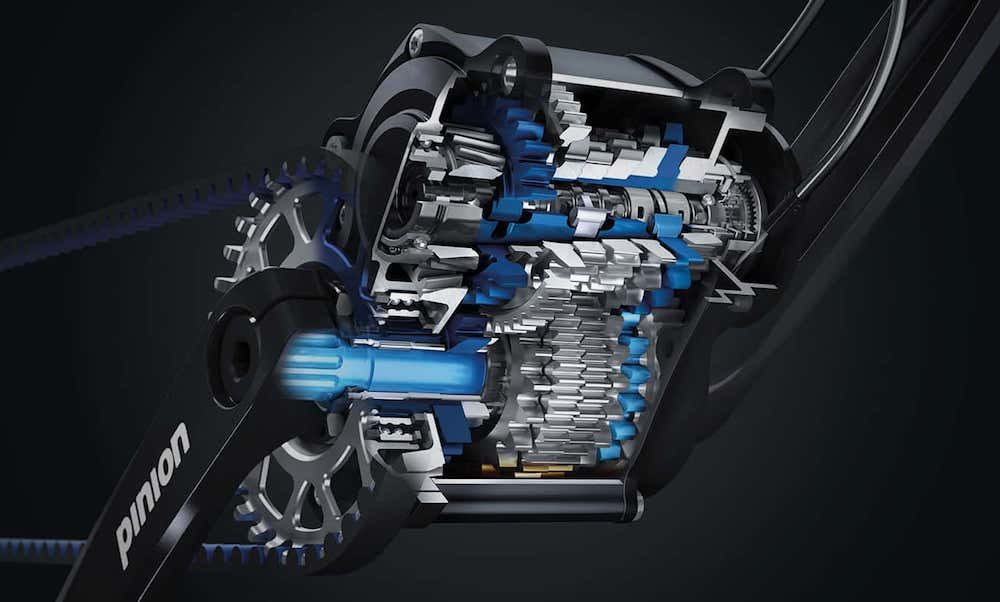 We actually have some drivetrain efficiency data for gearboxes, so let’s see how these numbers stack up!

Unfortunately, the gearboxes were all tested at 200 watts rather than 250 watts, so this isn’t a perfect comparison by any means. Let’s assume that the derailleur efficiency is the same at 200 watts which will give us a rough idea of the speed differences between derailleurs and gearboxes.

Note: For the gearbox test, the results showed a marked increase in efficiency as the rate of power increased, so it is likely that if we were to test the gearboxes at 250 watts, they would achieve higher rates of efficiency. I would imagine the Rohloff hub would actually leap-frog the 1X SRAM Force 1 drivetrain in the higher gear ratios!

If you’re spending a lot of time in the smallest gear, you have the most to lose with a 1X drivetrain. The 1X system is 0.9% slower than a 2X drivetrain which results in a 3 minute and 50 second time penalty over 100km.

When travelling at faster speeds, the higher wind drag negates the additional frictional losses resulting in the 1X drivetrain being 0.3% slower. This translates to a 14 second time penalty over 100km if using a 1X drivetrain. In other words, you have the least to lose when cycling at high speeds with a 1x drivetrain.

When the chainline is almost straight, the drive efficiency is within 1-watt between 1X and 2X drivetrains, resulting in the 1X drivetrain being 0.2% slower. This translates to a 25 second time penalty over 100km if using the 1X drivetrain.

Click HERE To Check Out My Weight Testing, HERE For The Tyre Resistance Testing and HERE To See My Aero Testing

Seatposts: Often Overlooked Yet Critical For Your Comfort (Lab Testing)