After recently featuring the wild Moots Snoots Antarctica fat bike, a few readers have passed on details of another bike specially built to take on some of the hardest conditions in the world.

This bike is a bit different from other Antarctica-conquering rides as it’s built around stability. The most obvious form of stability are the four fat bike wheels which are paired front and rear like the Dodge Tomahawk concept motorcycle. With each tyre measuring 5.0″+ wide – that’s a whole lot of rubber floating on the snow at all times! In addition, the longtail frame design increases the wheelbase length and helps to further stabilise the bike.

The bike was designed in conjunction with Davis of Carver bikes. Like all of their bikes, it was custom built from the plans in a Chinese factory who manufacture all of Carver’s bikes – custom or not. Davis has been using this titanium building shop for more than six years, and although he’d prefer to get his frames manufactured locally, he’s yet to find anyone who can match the quality and value in the USA.

With the four-wheel design of this Antarctica bicycle, you’ll notice the drivetrain is different to anything you’ll have ever seen. A drive chain connects the rear axle to a freewheel mounted behind the bottom bracket which uniquely goes in between the two rear tyres. This was one of the only ways they could drive the rear wheels with 10 inches of rear tread!

A Pinion P1.18 18-speed gearbox gives the bike an ultra wide gear range (636%) – in fact, it’s wider than any derailleur or gearbox system on the market. The key advantage of the Pinion system is that the cogs sealed away from the elements, making it simple and reliable for the harsh conditions of Antarctica.

When you focus away from the wheels and drivetrain, the rest of the 22kg bike is rather simple. It’s finished with titanium handlebars, Ergon grips, a titanium seatpost and a Brooks Cambium saddle. Hank will be pulling an Acapulka Ice Express 235 sled behind the bike with all of his gear. 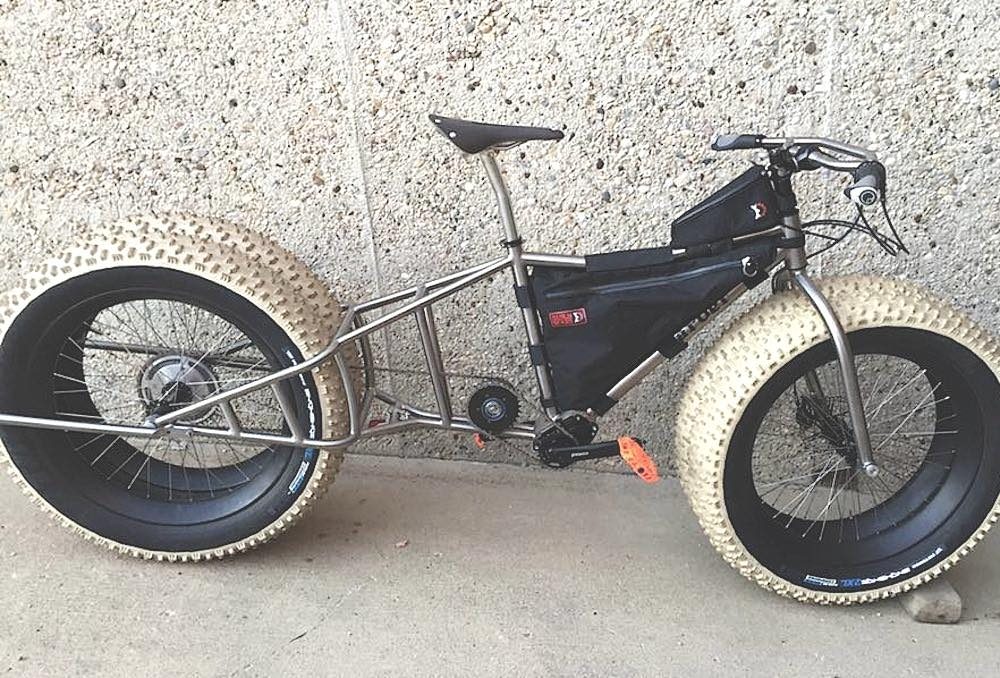