We’ve now finished our trip, putting in over two years of riding and 31,000km. Our gear was put to the ultimate test, and lots of it ended up failing somewhere along the line. To give you an idea of the amount of stuff that stopped working, broke or lost some of it’s functionality, we’ve put together this extensive list. Some of it you may find surprising!

Here’s a brief list of the the stuff that broke and/or repaired in our first year of bike travel:

The full article on our broken gear is HERE.

This is the carnage our kit has seen over the second year… it’s far more extensive!

Our original Steripen had a really good innings, it worked well for 18 months before it either wouldn’t turn on, or wouldn’t stay in long enough to filter our water. We were later gifted an unused Steripen in the Philippines, but didn’t get more than about 10L of water out of it before it suffered the same issues. We’ve since bought ourselves some Sawyer Water Filter Bags to replace the Steripen, but as you’ll read below, we’ve had issues with that solution. We broke the zip on our Hard Candy Bubble Sleeve recently, and Kat’s Apple Smartcase has repeatedly comes apart at the edges (we superglue it back together when we can). Kat’s original Kensington Protective Cover cracked early on in our trip, however Alee still uses his same one today. It seems Kat doesn’t have much luck when it comes to cases… More on iPad cases for bike touring HERE. Our MSR titanium pot cracked at the handle. This ultra-lightweight pot gets used 1-2x per day, so we are happy that MSR sent us a replacement! I really like this hair trimmer (review HERE), but unfortunately it didn’t last the distance. An integral part which holds the hair trimming comb in place broke after 12 months use. Helmets take a real beating on a bike tour. Our helmets are dropped, lent against and packed into small spaces. After 20 months, the retaining strap on Alee’s helmet snapped, and both helmets are now cracked in multiple places. We recommend replacing helmets every 12-18 months of bike touring! We had a problem with the CDC tandem timing belt and chainrings after 2,000km use (review HERE). Gates replaced this under warranty, and updated everything to the Centertrack model, which we’ve now used successfully for 20,000km. Our Skyledge tent shrunk, making it unusable after ~400 nights in it. The full details of our tent failure can be read HERE. We are glad that MH were generous enough to award us with a warranty replacement despite being out of warranty period. Alee’s four year old NeoAir died after about 500 nights use on it. MSR offer a brilliant lifetime warranty on this product, so it was quickly replaced. Review HERE. We’ve broken three Exped air pillows on this trip: two lightweight versions, and one comfortfoam. We got about 150-200 sleeps out of the lightweight ones before they deformed, and we decided to stop using them after that. We thought that the comfortfoam model wouldn’t lose it’s form given it is filled, but after ~500 sleeps, even it has deformed. The good news is that Exped are great with warranty replacements provided you’re within five years of purchase. Although we only owned these tents for two days, we managed to break two! It seems we picked up some tents that were part of a dodgy production run. Needless to say, we got our money back. Review HERE. We thought Nalgene bottles were tough as nails, but it turns out, that if they fall the wrong way you can be in trouble! Our Airstash worked fine for almost two years, until one day it would not turn on. Given it was out of warranty period, Alee decided that he would open it up and see if he could fix it. A cable had broken inside, so we were able to make it work again! Unfortunately, that only gave us a few more weeks, the next time it stopped working, it was completely shot. There seemed to be an issue with the chip. Review HERE. This particular Schmidt hub completed over 10,000km but unfortunately decided to give up the ghost just as we were getting close to home. It was a bit noisy one day, and then by the next, it had completely stopped providing a charge. Luckily Schmidt have a good warranty. Review HERE. We had finally snapped a belt… at 31,000km! The Carbon Drive system lasted much longer than we expected. We probably would’ve used four chains over that kind of mileage. Alee’s crankset BB up the front of the tandem gave it a pretty good shot, with 19,000km covered in all types of weather conditions. This is a pretty typical life for a high quality bottom bracket, so we weren’t too bummed. We got about six months of use out of our Spot Tracker before it stopped tracking. We have still not received a warranty replacement. 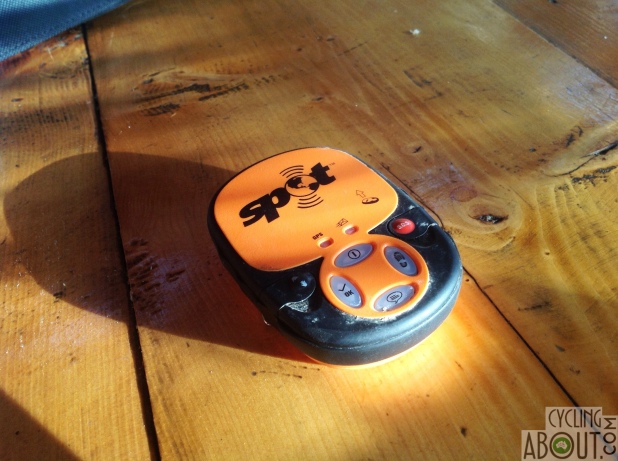 Our Garmin has suffered ongoing problems throughout our trip. More recently, it likes to play a game where when we turn it on, it automatically switches itself off. We play this game 5-10 times before it finally works. We kind of gave up on it (it’s out of warranty and Garmin want $200 to replace it), so we mostly use a smartphone for most of our navigation these days. Most of our technology has kept itself in one piece, however just recently the battery door to Kat’s camera had a hinge break, and as a result we cannot close it. The camera is still good functionally despite how many times it has dropped – luckily it is shockproof! Our Ortlieb trunk bag had a bit of stitching come undone, but we’ve been able to keep that together for some time now. Despite the odd hole in the material, it’s held together well, like most Ortlieb gear. The shoulder pads for Backroller panniers (which are incredibly uncomfortable btw) have broken off the straps of our bags. This makes using the pannier as a shoulder bag rather uncomfortable – luckily we don’t do this often. Our Ortlieb map holder tore open after 20 months of continuous use, which we think is pretty acceptable. It was getting pretty scratched up anyway, making map details harder to see through the clear plastic. Although our scissors became blunt very early on, the Leatherman faired pretty well on our journey. For some strange reason, some of the spacers on the knife became brittle and eventually fell apart, allowing a few of the accessories to rattle around. The Sawyer water filter bags are a light and cheap way to filter water. We purchased a set after our Steripen stopped working. Unfortunately the bags aren’t as durable as we’d have liked, the 1L bag was good for two months of heavy use, and the 2L bag only lasted a couple of weeks. They’d be fine for people who were only using them now and again. We managed to break the flange on our Rohloff hub, after about 28,000km. We believe that it is partially our fault, as we’d laced the hub up multiple times using different spoke patterns, which as a result had weakened the flanges. Luckily, Rohloff are brilliant with replacements and we were on the road in no time. Our little tripod gave way by cracking at one of the non-replaceable ball heads.