This Trans Am bike is probably as far from a typical touring bike as you’ll see on CyclingAbout, but when Rob of English Cycles posted his personal race bike on Facebook – I knew I had to write something about it.

Rob English is currently preparing to tackle a 6920km (4300mi) ultra-endurance event called the Trans Am Bike Race, which traverses the USA from west to east.

To get some insight into what it takes to compete in this event you should check out my short video with 2015 winner Jesse Carlsson a few days before he departed.

With master-level frame building skills and a handful of friends in the bike business, Rob has been able to create his ultimate bikepacking bike for the Trans Am. 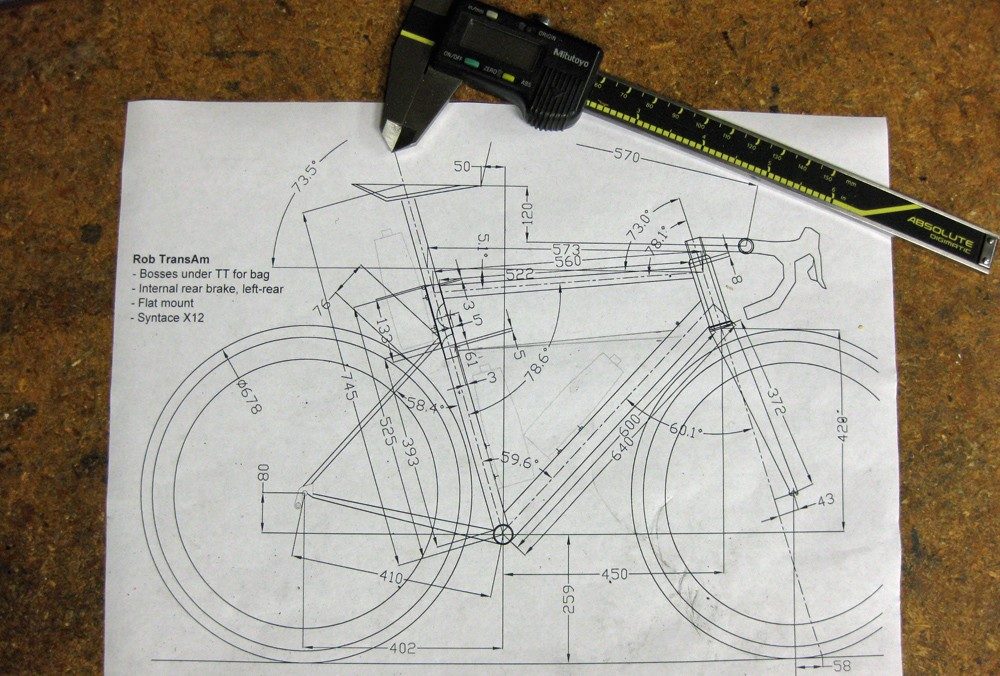 The drawings for this bike don’t really look to be anything special, with somewhat typical road bike dimensions across the board.

For the steel connoisseurs out there, the frame tubing used is a mixture of True Temper S3 and Columbus Life.

But what sets this bike apart from others –  the small details. 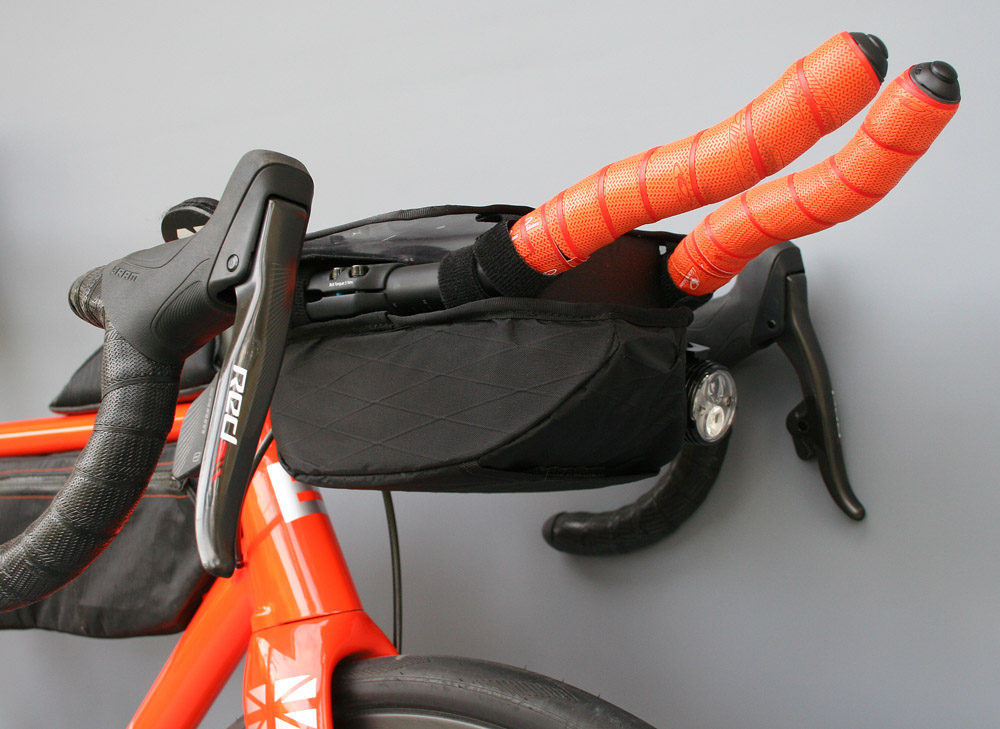 The front of the bike immediately indicates that this bike is built for speed.

A set of Enve SES Aero Bars juts out the front with blip shifter buttons on the ends to control the gears. You’ll also notice the brake/shifter units are button-based – this is because Rob’s bike is using the new SRAM eTap gear system which uses wireless signalling to change the gears.

That’s right, there’s no gear cabling to be found on this bike! 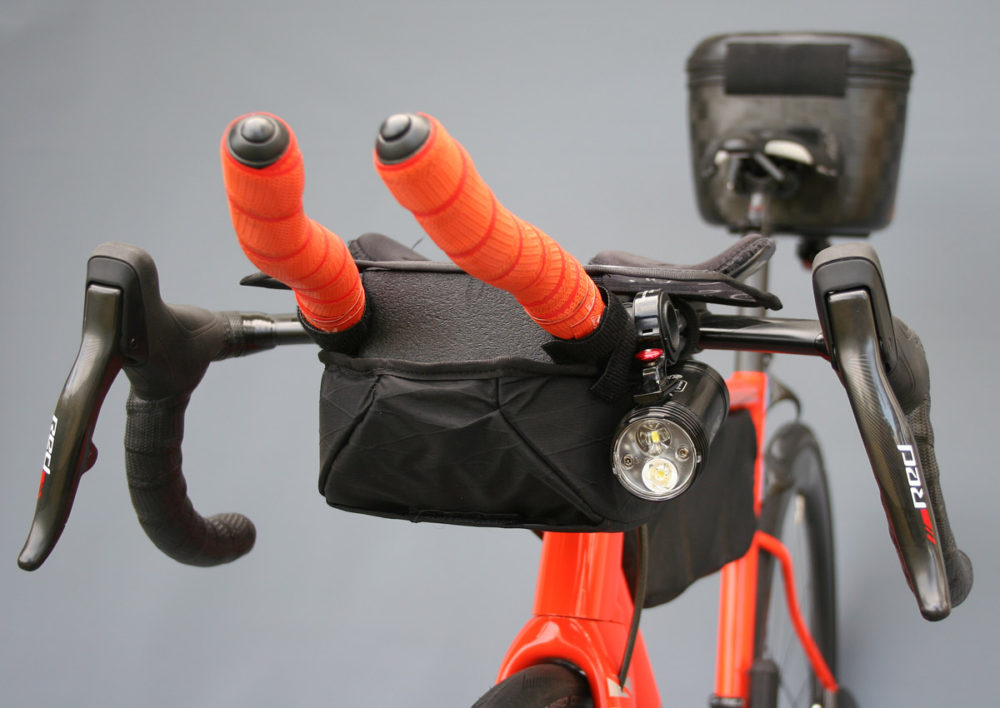 Rob collaborated with Kaibab Customs to create an aero bar bag which is perhaps a bit different to anything you’ve ever seen. From above you’ll see the lid is a map case that lifts to open a feeding box that is strapped directly to the bars.

The fork has come from Parlee who is one of the only companies making aero disc brake forks. 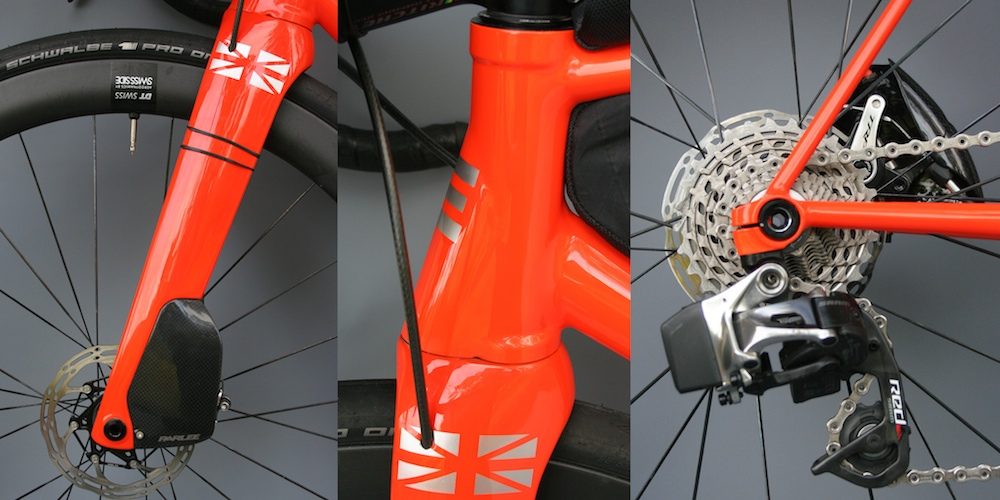 Rob isn’t carrying any sleeping gear as he’s planning on staying in hotels/motels every night. That means he can get away with minimal bag storage.

The Kaibab Customs half frame bag uses a bolt-on design (as opposed to straps) to connect to the frame for that ultra-clean look. The Xlab Stealth 200 top tube bag also fits onto two bosses and is said to reduce aerodynamic drag from the stem and headset spacers. 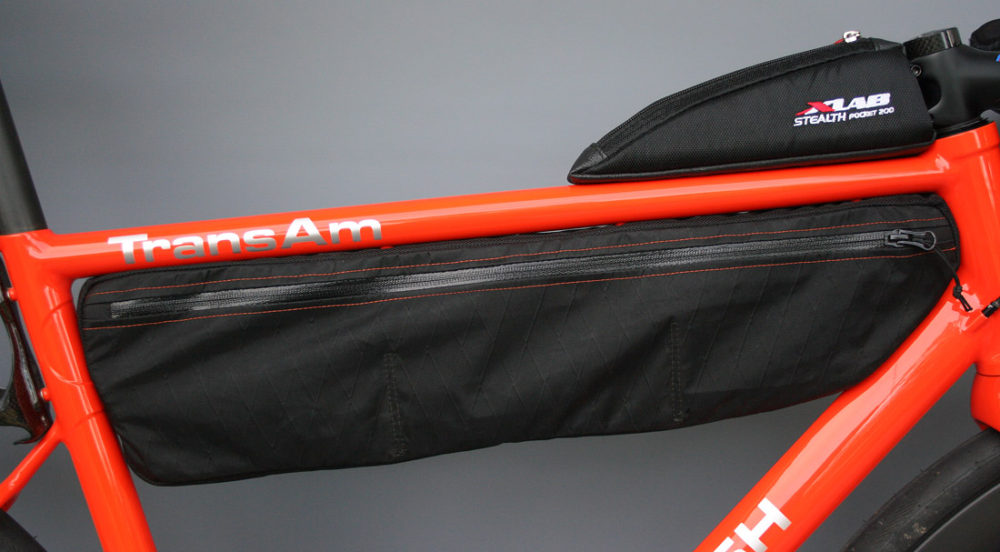 The carbon aero box is pretty special too. It’s been made by Ruckus Composites to Rob’s exact dimensions in a way that hopefully doesn’t hinder his speed.

Rob actually made a styrofoam version that Ruckus were able to match and turn into a box. The rear bag is mounted using a steel frame that Rob constructed specifically to ensure there was no bag ‘sway’. It’s been triangulated using a saddle rail mount. 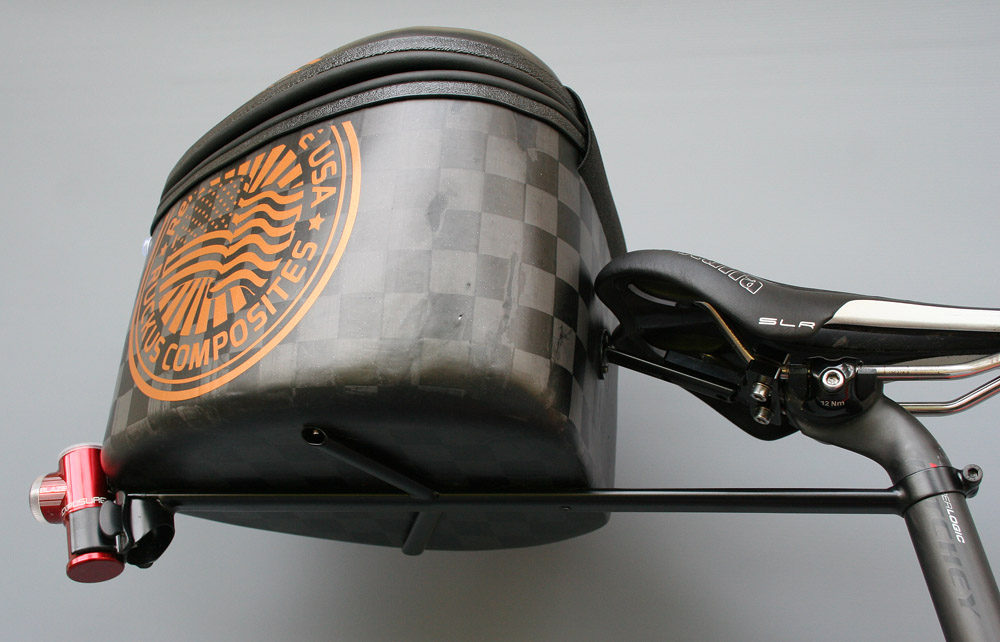 From the front and rear, this bike looks particularly fast. The frontal area of the bags is all confined within Rob’s body area.

The front and rear lights are made by Exposure (Strada 800 / Blaze) and Rob will charge them both along the way in motels/restaurants. By going dynamo-free, Rob is actually saving about 5 watts or in terms of speed, resulting in a speed increase of between 1-2%.

That’s not much, but when you consider how long this event is – time certainly adds up. 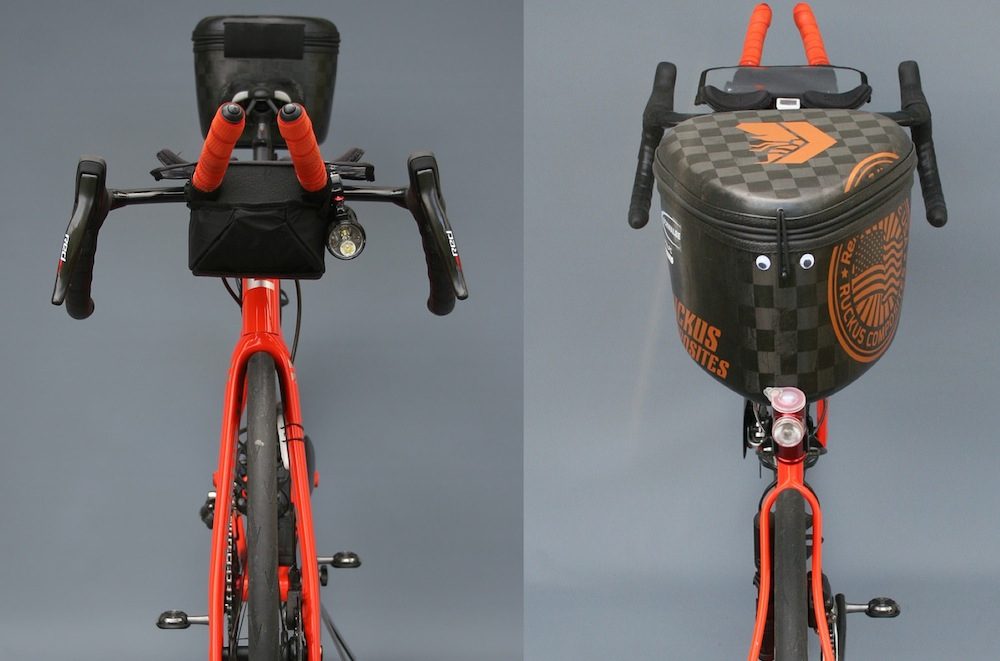 The Trans Am bike uses deep-dish carbon DT Swiss ERC 1100 wheels that weigh only 1530 grams (3.4lbs) and are optimised around aerodynamics.

These wheels are paired to 28mm Schwalbe Pro One tyres that DT Swiss say are faster and more comfortable than narrower versions.

Rather than using rubber tubes, this bike is set up tubeless. Road tubeless can be a bit hit and miss, but it can undoubtedly reduce tyre rolling resistance. 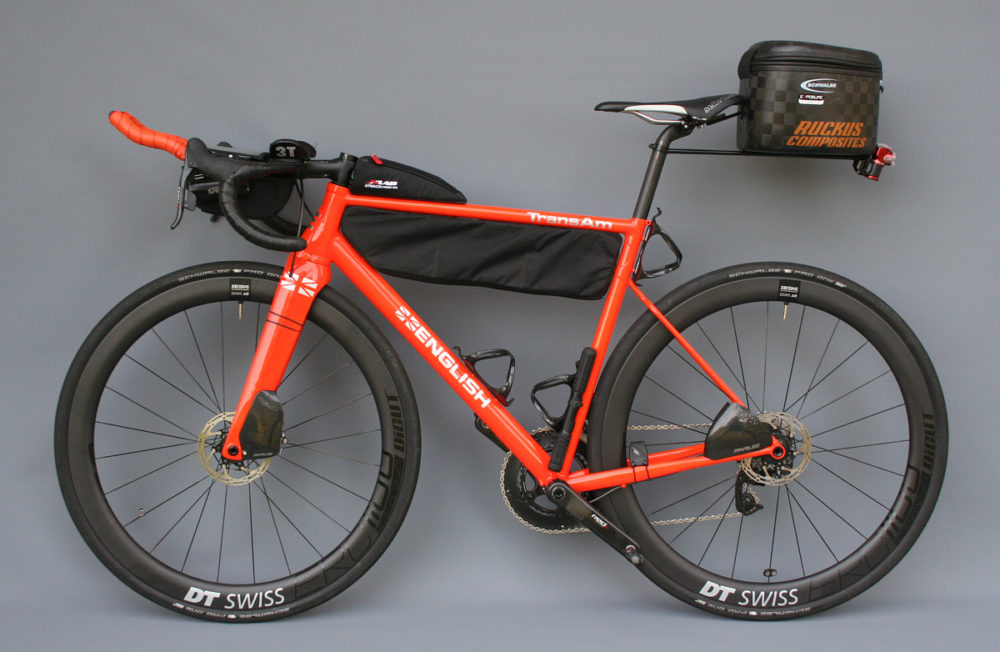 The total bike weight is just under 10kg (22lbs) including all bags, lights and pump. That’s rather impressive considering so many carbon disc brake road bikes tip the scales over 9kg (20lbs).

Good luck and enjoy the Trans Am, Rob! 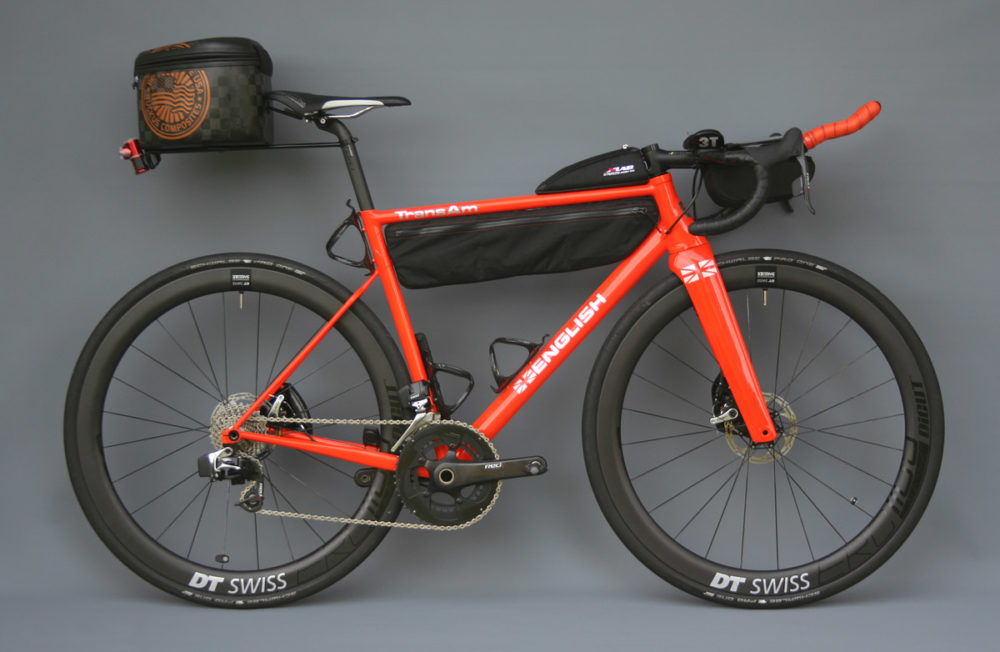