The Tern Eclipse had passed a few thousand kilometres of testing at home, but the real test for this folding bike was how it would perform on an overseas tour. I hopped on a plane with my half-sized bike box and flew to Bangkok, where I was able to swiftly throw the box in the back of a taxi and shoot down the expressway to my hotel. 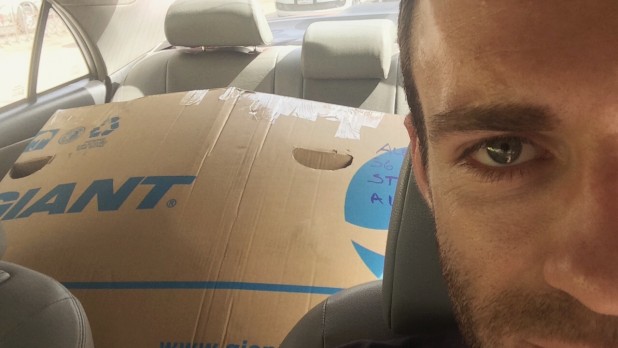 The next day I woke up to find folding bikes everywhere. Folding bikes are the ‘norm’ in Bangkok, with Bromptons, Dahons and all kinds of cheap folding bikes weaving through the heavy traffic. Every bike shop has an extensive range of folders in all shapes, (wheel)sizes and colours.

I decided on Thailand as my destination to find out how capable the Tern is as a travel bike. My testing ground is the Mae Hong Son (MHS) loop in the north-west of the country, a well-known scenic ride for motorcyclists and cyclists alike. It’s also one of the hardest road loops in the world, a perfect challenge for a folding bike which normally thrives in cities. At 660km in length, with 4000 bends and 13000m of climbing – this was shaping up to be the ultimate folding bike test! 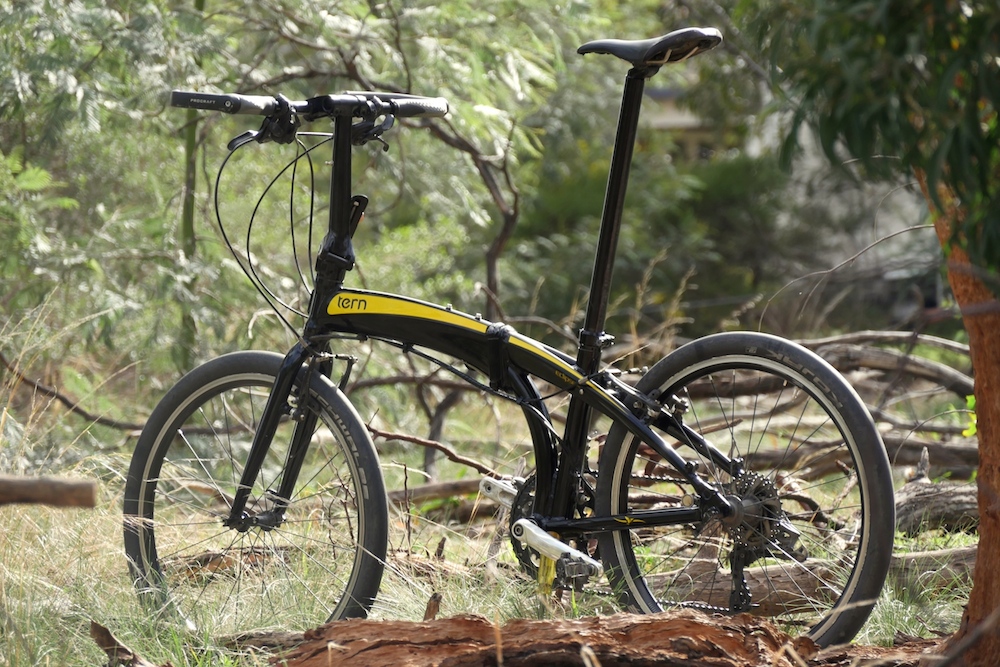 My PART ONE Review Covers:
– A general overview of the bike
– How it rides
– How it folds
– How you can carry luggage
– How you can make it fit someone really tall

My Bike Setup for Thailand

As I am almost 200cm tall, fitting the Tern Eclipse was never going to be perfect. For whatever reason, folding bikes only come in one size, optimised for someone of average height. You can’t really make much of an adjustment to the reach or height of the front end either. To make the Tern comfortable I installed the longest bar ends I could find. When I’m at the tip of the bar ends my reach is closer to what I’m familiar with, but it’s still very frustrating that I can’t get to the same position as any of my other bikes. 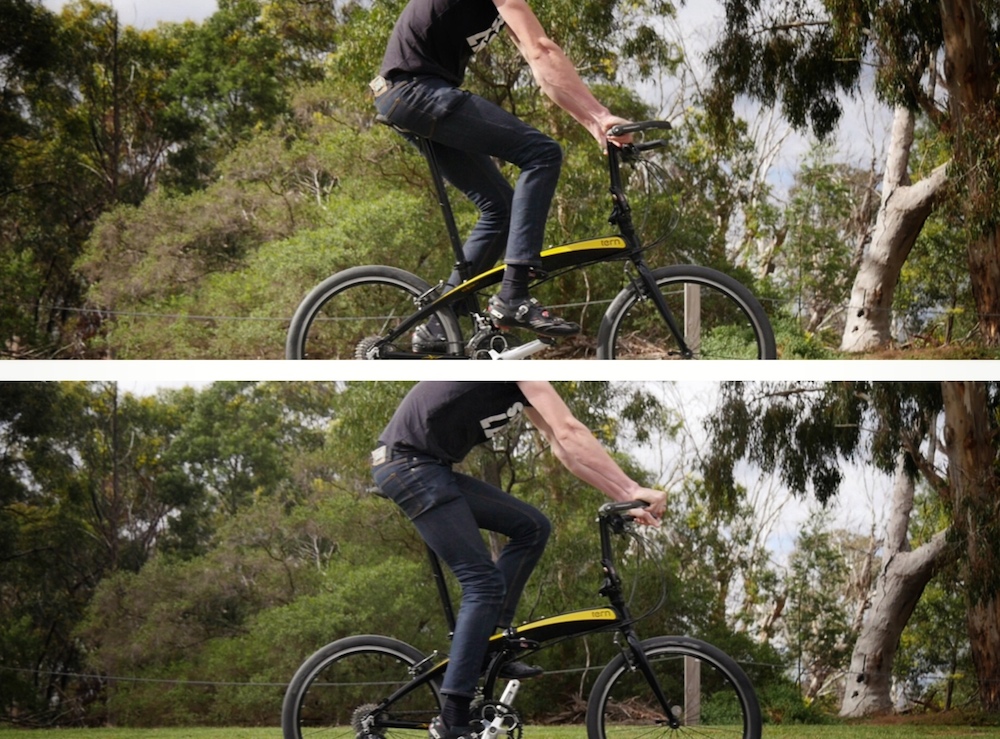 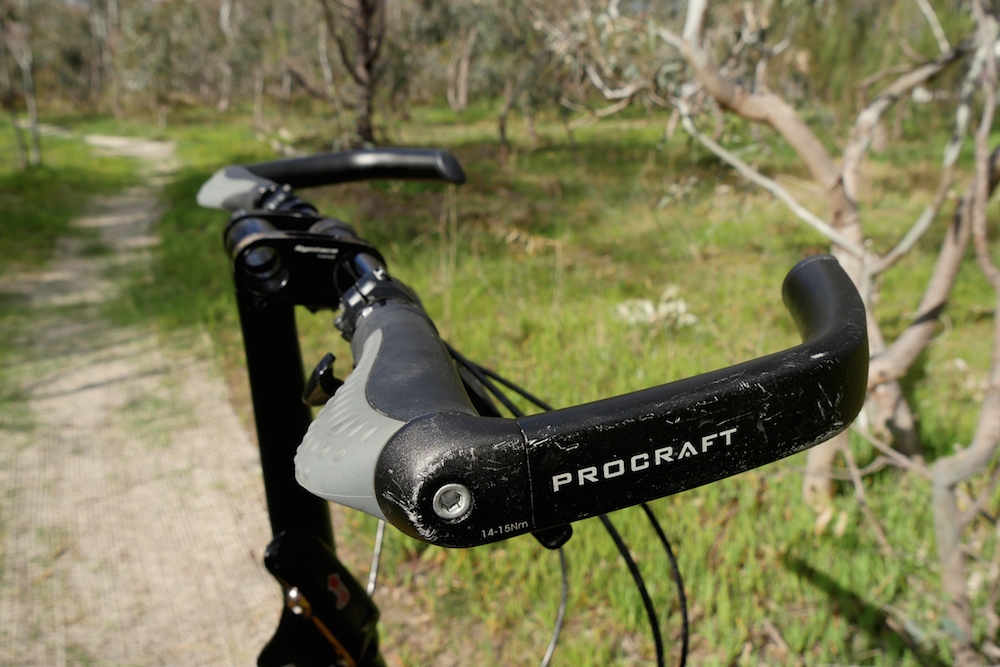 I fitted my SPD pedals to the bike as I can’t imagine travelling without them. I also swapped out the saddle for one that is far more comfortable on longer rides. I found the stock saddle good without lycra for up to 50km, but on anything longer, it chafes my derrieres.

To carry my luggage I’m using the Tern Kanga rack in combination with an Ortlieb pannier that’s been flipped on its side. This setup is super easy to take on/off the bike, is secure and is 100% waterproof. See PART ONE of this review for more details.

How Does the Tern Eclipse P18 Ride?

The Tern Eclipse instantly exceeded all my expectations of how a folding bike would ride. Unlike many other folding bikes, the Tern feels stiff like a regular bike. The stiffness gives you the confidence to ride hard, both up and down hills. There were times when I exceeded 80km/h with all my gear and the bike still felt stable and capable of more. I found that the front load actually damped the steering, enhancing the way the bike handled mid-to-high speeds. The front-load also stopped the front wheel lifting on steep climbs.

The frames’ handling is good at low speeds too. The steering is light enough to effortlessly squeeze in and around cars while riding through traffic. With a front load, it requires just a little more rider input to make the turns. 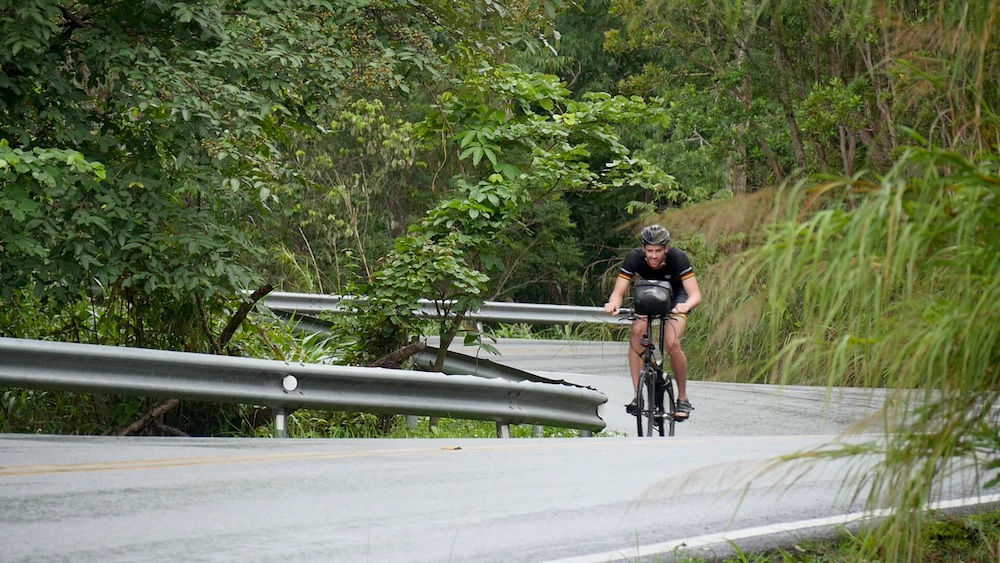 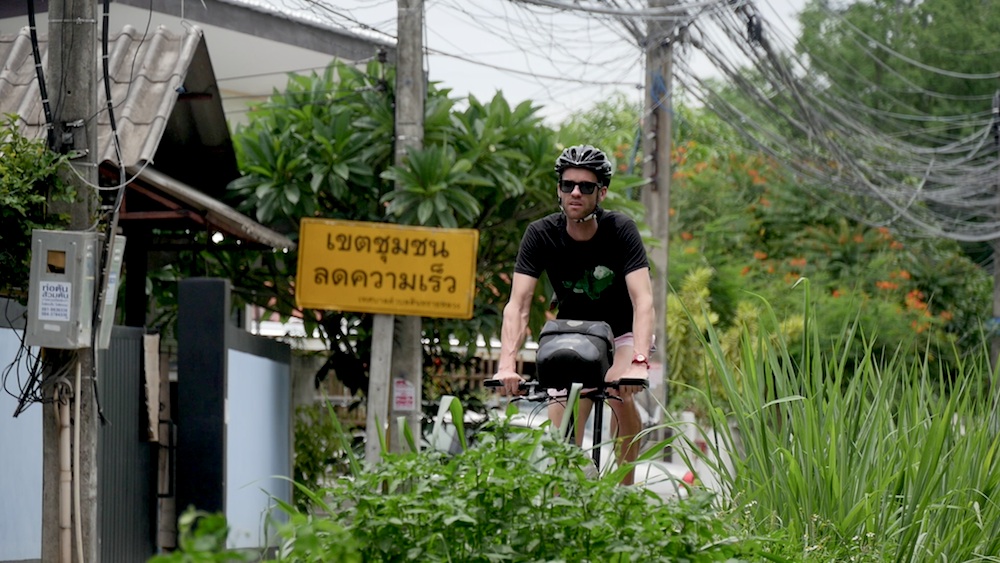 In order to increase the comfort for folding bike touring, I’d suggest using nice wide tyres (2.0”+) with supple sidewalls, and a saddle which offers a lot of flex (perhaps a Brooks if they work well for you). 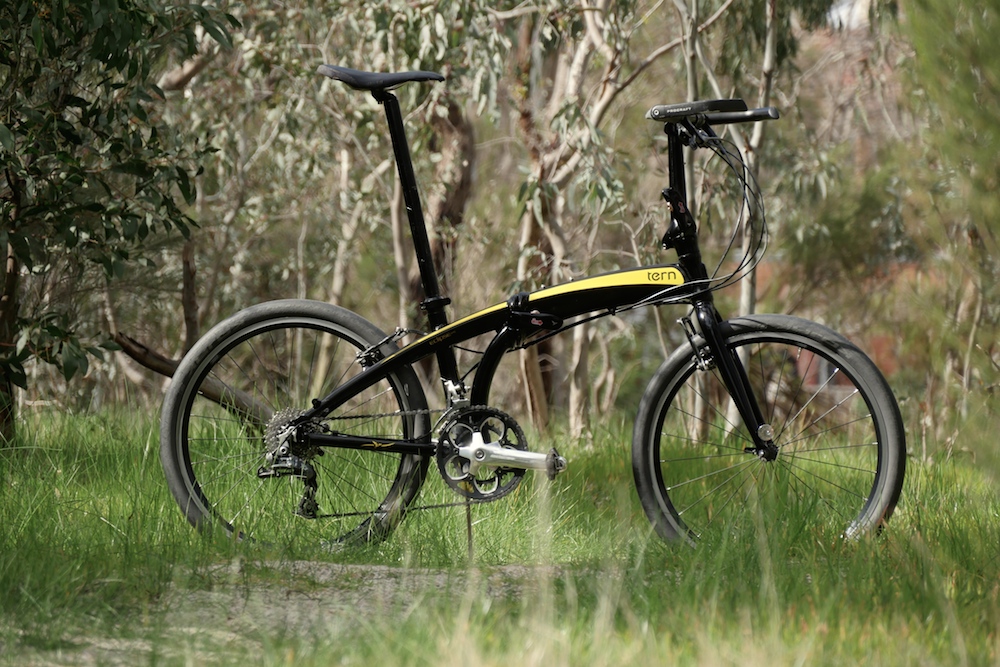 The frame and handlepost clamps started creaking after a few thousand kilometres. In order to stop the creaking I ended up simply tightening the clamps. The only issue now is that it’s harder to undo the clamps for a fold, and anything less tight still results in a creak. This could be problematic for people with limited strength in their hands, but it’s ok for me. 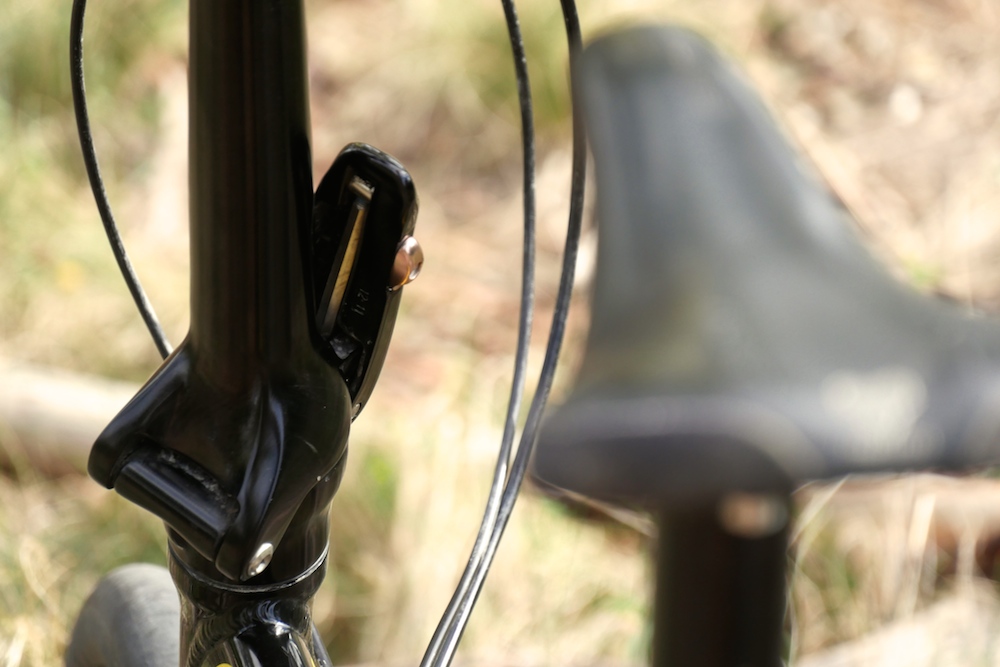 If you’re riding in all weather conditions, you’ll find that grit works its way into the seat tube making the seatpost difficult to drop. It’s essential to clean out the seat tube regularly to ensure that you can fold your bike (or adjust your saddle height quickly). I also found that the quick release collar assembly must be regularly cleaned to maintain its function – it can be really hard to undo if you are lazy!

Although the Tern’s v-brakes had enough stopping power on the MHS loop, we went through brake pads really quick due to the combination of wet conditions and steep mountain roads! If I was on a longer tour I’d definitely choose a model with disc brakes because they stop quicker in all-weather conditions and the brake pads simply last longer. The only issue is that Tern’s disc models are less sporty than the P18, making them 3-4kg heavier (you do get stronger and more durable components).

It’s all about gear ratios on a folding bike! You can have just as high and low gears as a standard touring bike with the right cogs, taking you up and down any mountain. For the MHS, I was geared almost perfectly for my strength, but for other riders looking to do a similarly challenging ride, you may want to change the rear cassette to something with a bit more range. The smallest gear on the Tern Eclipse is 26 gear inches, which is higher than I’d recommend for a super hilly tour. 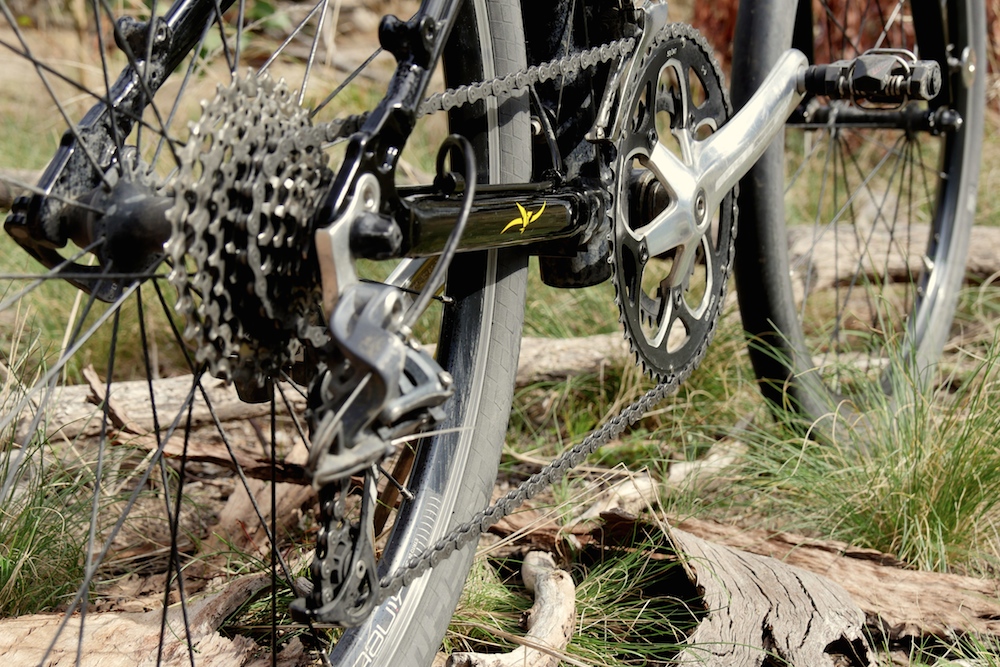 Tern makes folding bikes with two wheels sizes: you can choose 20” on the Verge series or 24” on the Eclipse series. The reason that I am not on a 20” is that the seat can’t extend high enough for me. If I had the choice, I’d probably take the smaller/lighter pack size of a folding bike with 20” wheels. In this case, the Verge packs 12% shorter in length and 5% smaller in width/height than the Tern Eclipse.

It’s hard to say whether the Tern Eclipse with it’s bigger wheels is faster than the Verge. You tend to ride at slower speeds on a bike tour, so the difference between the models really is negligible – on smooth tarmac, both bikes roll along fast enough. If you were planning adventures on rough roads, you’d be better off with 24″ wheels because they roll better over holes and depressions. If you’re on smooth roads, the 20” will cruise along fine.

Travelling on a Folding Bike

This is the best part about folding bikes – they are a dream if you’re putting them in cars, buses, trains and boats. Folding bikes allow you to travel in a completely different way because you simply don’t have to plan anything around the bike.

For a folding bike to be worth the sizing/comfort compromises, I’d want to fold it at least 5x on a trip. If I was doing a point-to-point or loop tour, I’d definitely prefer to ride my regular touring bike. 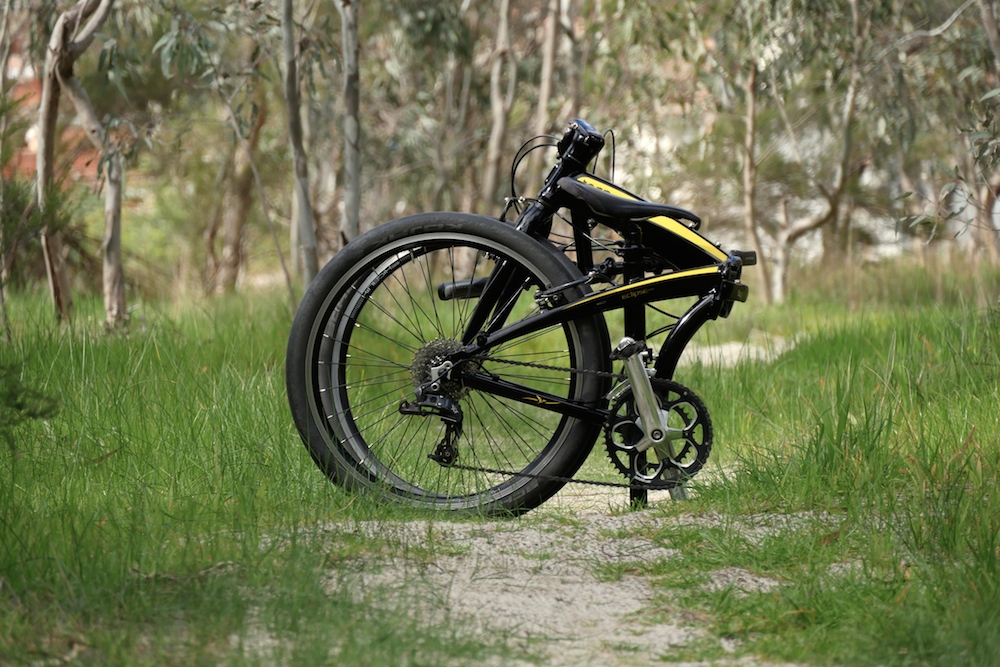 Pros of the Tern Folding Bike

– Excellent for taking on any transport or storing
– The frame is stiff enough to feel like a regular bike; it’s surprisingly capable
– Well-made frame and components
– Wide range of gears (26-111 gear inches)
– Great at carrying a light loads on the front 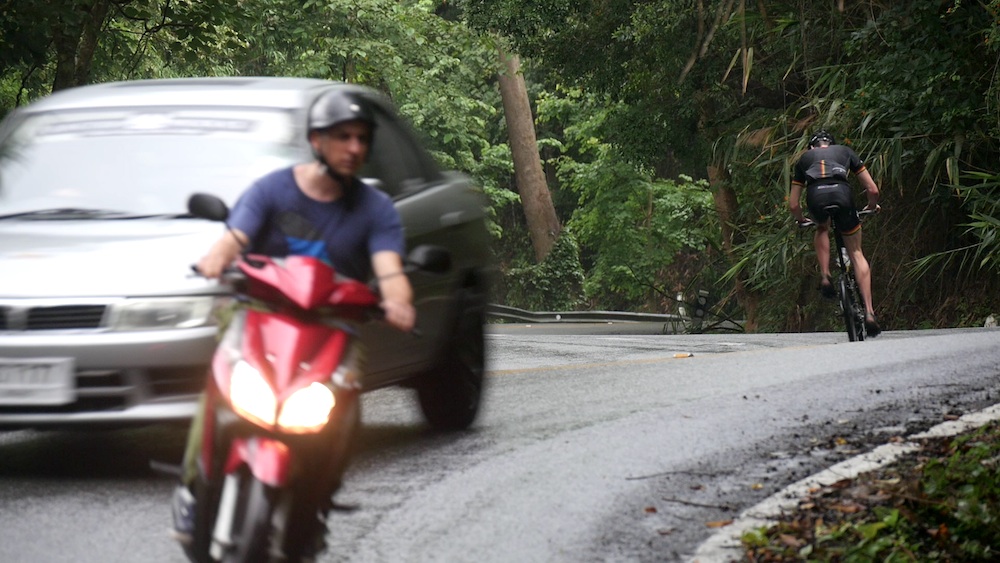 Cons of the Tern Folding Bike

– One size fits all: you’ve got to be lucky to fit one perfectly!
– Less comfortable than an ordinary bike
– Not as good on rough roads due to the small wheel diameter
– Sometimes harder to obtain good quality tyres/tubes
– Frame/handlepost clamps are sometimes hard to undo 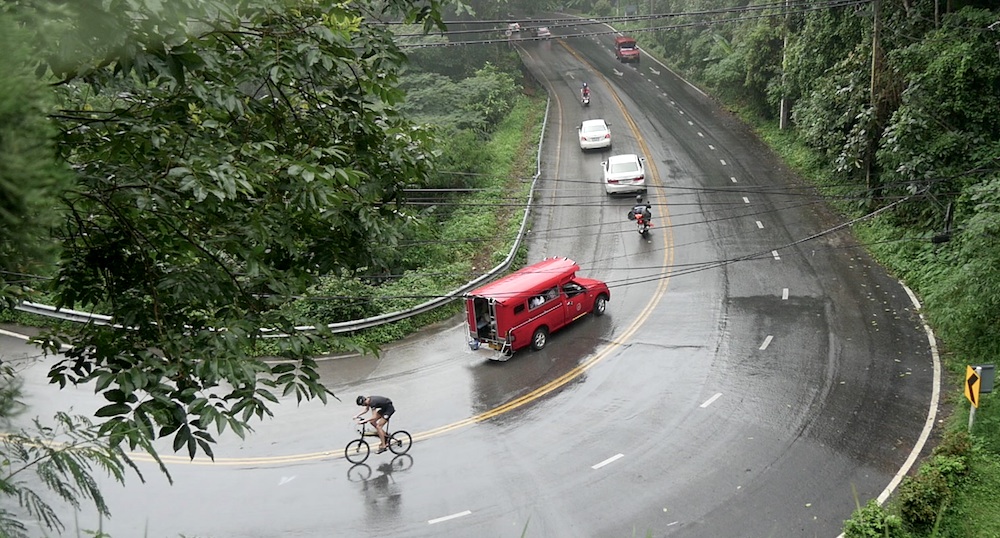 Tern has set a high benchmark for how folding bikes should ride and feel – the Eclipse is stiff, capable and fast. If I was buying a folding bike for a multi-week trip in the mountains, I’d definitely opt for a model with disc brakes and perhaps an even smaller gear. For shorter trips in dry conditions, you can certainly get away with the P18 – as it comes it’s built to last.

The biggest limitation of folding bikes is sizing. I have no idea why folding bike manufacturers don’t offer a full-size range. If I could get a folding bike that put me in the same position as my standard touring bike I’d certainly use one for more of my travel. 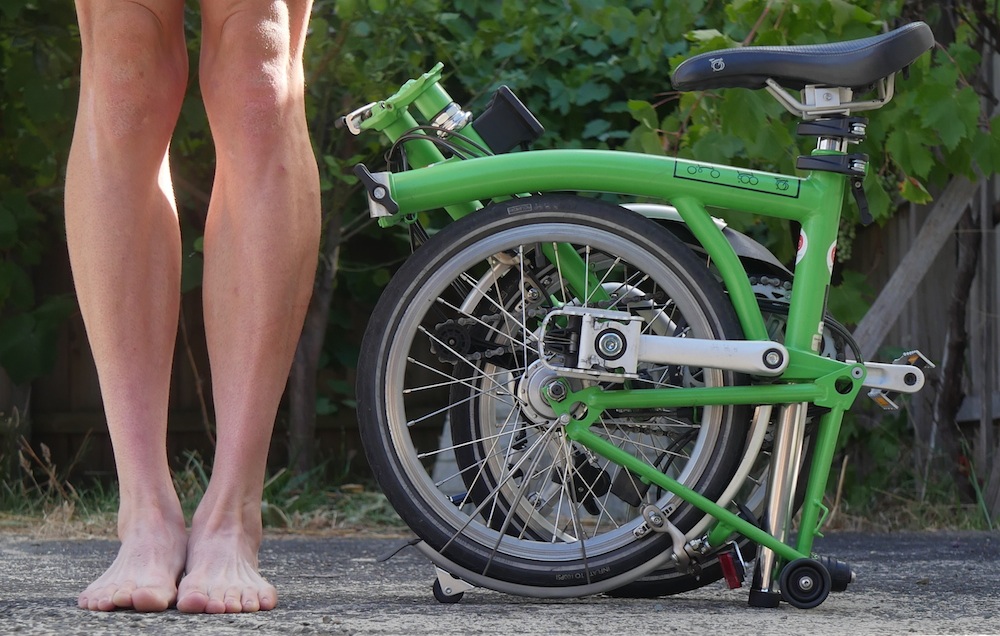 Guide: How To Choose The Best Folding Bike For Bicycle Touring I’ve just got back from travelling around Sri Lanka – what a lovely island to explore! The country…

Pick the right roads and they’re simply stunning, not to mention smooth, wide and with low traffic volumes.…

Gallery: Cycling One of the World’s Best Road Loops