Over my years of bike travel, lateral frame stiffness is a feature that I’ve come to really appreciate. It’s not by any means essential that a touring bike is stiff, but it goes a long way when it comes to the handling, stability and general feel of a frame. Other than a couple of hundred extra grams, you’ll find there isn’t any downside to additional stiffness either.

Please note that this article is NOT about whether a stiffer bike is faster to ride. I’ll leave that for Simon at Global Cycling Network to investigate. 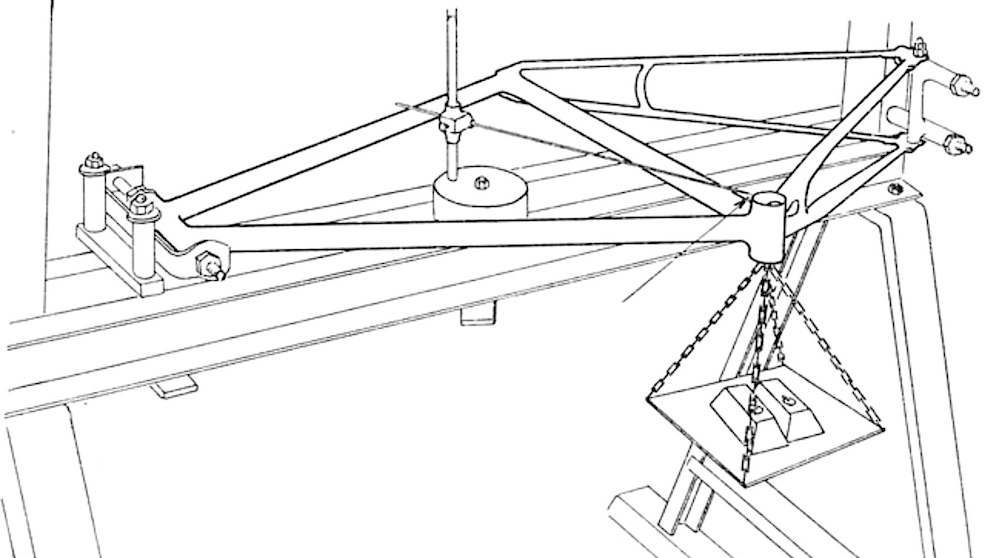 Why Stiffer Is Better When It Comes To Bike Travel

The majority of bikes used for travel support a front and rear load; your bike frame is the medium which needs to resist the twisting forces between these two points.

Stiffer touring frames are better for the following reasons:

Extra Stability
On a loaded touring bike, you may have noticed that at certain speeds your frame can wobble about a bit. While the degree of frame stiffness isn’t the cause of this oscillation (it’s likely an unbalanced front load or slightly out-of-round front wheel), stiffer frames do have a greater ability to resist it. This extra stability is the very first thing I notice when I test loaded touring bikes; I’ve never experienced, nor can I imagine such a thing as too much lateral stiffness. Frame stiffness is particularly necessary for drop bar touring bikes as you have less steering leverage to counteract this wobble, should it occur.

Unbalanced Front Loads
It’s not always easy to perfectly balance your front load. I organise my bags based on use, so on one side, I have kitchen gear and on the other, I have camping gear. My kitchen gear works out to be ever so slightly heavier, but by using a super stiff touring frame, I’ve noticed that oscillations are far harder to induce, even with a slightly uneven load. In short, you’re afforded a bit more flexibility with how you load the front of your bike.

Confidence Inspiring
The torsional rigidity of a stiff frame is undoubtedly more confidence inspiring. I feel like I have more control over my loaded bike when there is less noticeable flex coming from the toptube and downtube. 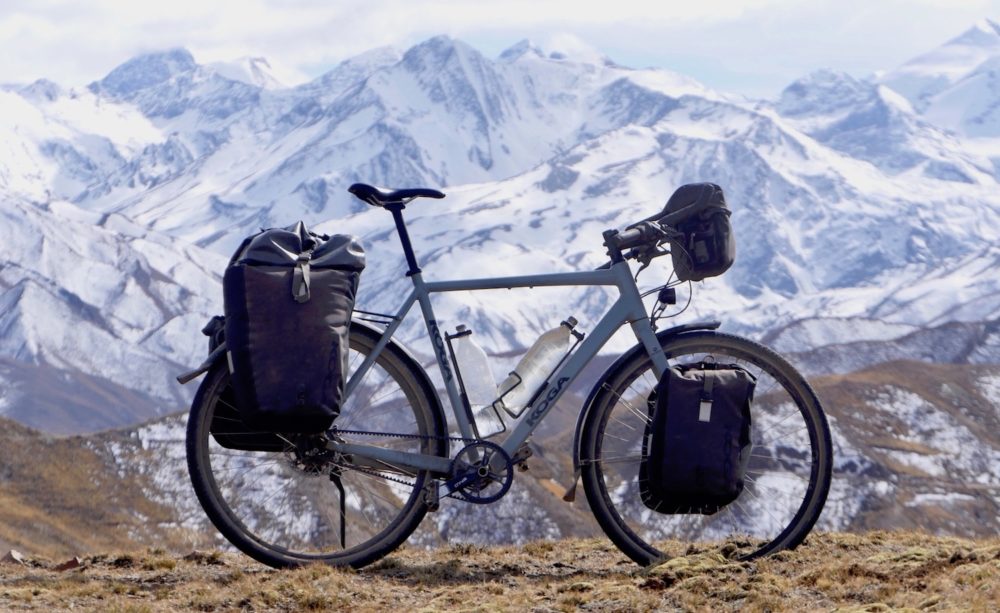 My KOGA WorldTraveller-S (video) features one of the stiffest touring bike frames on the market.

Here’s the good news. You can build a super stiff touring bike using any frame material. I won’t be diving into the specifics of frame materials in this article, instead check out my steel vs. aluminium vs. titanium comparison HERE. But in short, a good touring frame can be constructed with aluminium, steel, titanium or carbon – it’s all about the design.

A titanium frame that is equal in strength to a steel frame is about half the weight and half the stiffness. To increase the frame stiffness to an adequate amount, titanium manufacturers use larger diameter tubing. This results in a frame that is strong and stiff, yet often lighter (and more expensive) than steel.

An aluminium frame is about a third as stiff, a third of the weight and half as strong as a steel frame with the same tubing specifications. You’ll notice that like titanium frames, aluminium frames also require large tubing diameters but with far thicker walls in order to maintain adequate strength and stiffness. 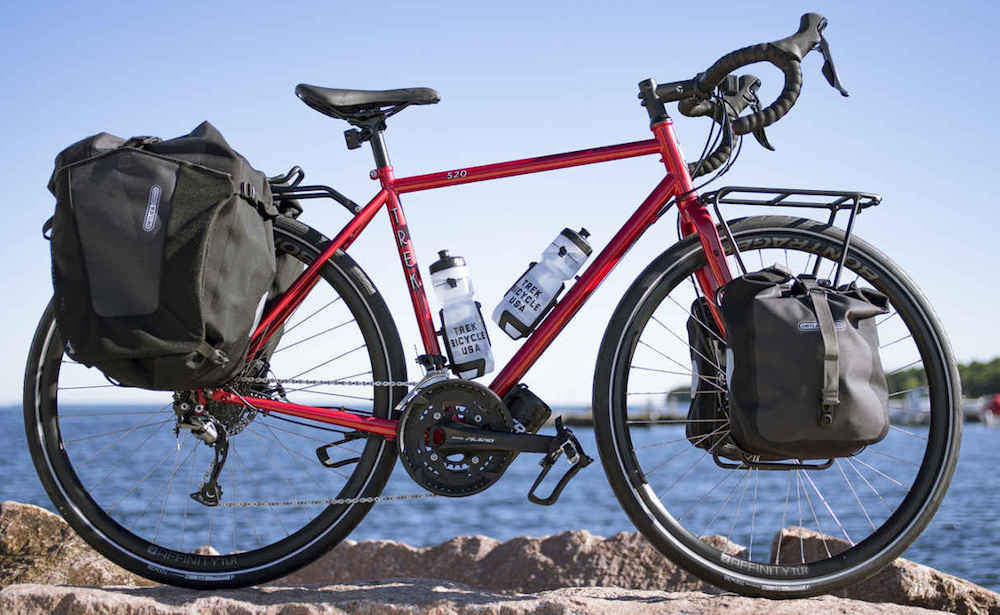 The Trek 520 this year received a larger diameter downtube to increase the overall lateral frame stiffness.

How To Tell If A Bike Frame Is Stiff

This isn’t a precise science, but in general, a stiffer frame will use tubes of larger diameters with a thicker gauge (wall thickness). The frame size, tube butting, ovalization and quality of materials will also contribute to the overall stiffness, but this is much harder to determine without some very specific frame construction information, rarely provided by manufacturers.

While ultra-light, ultra-thin, large diameter tubing does exist, it is highly unlikely that a frame designer would use it in a touring bike frame. This type of tubing is reserved mostly for road bikes; an example tubeset is Columbus Spirit OS (steel) which is just 0.4mm in the middle of the tube.

Oversized headtubes (look out for an internal upper headset assembly) are another indication of a potentially stiff frame because frame builders have an easier time connecting larger diameter tubes together with similar surface areas. 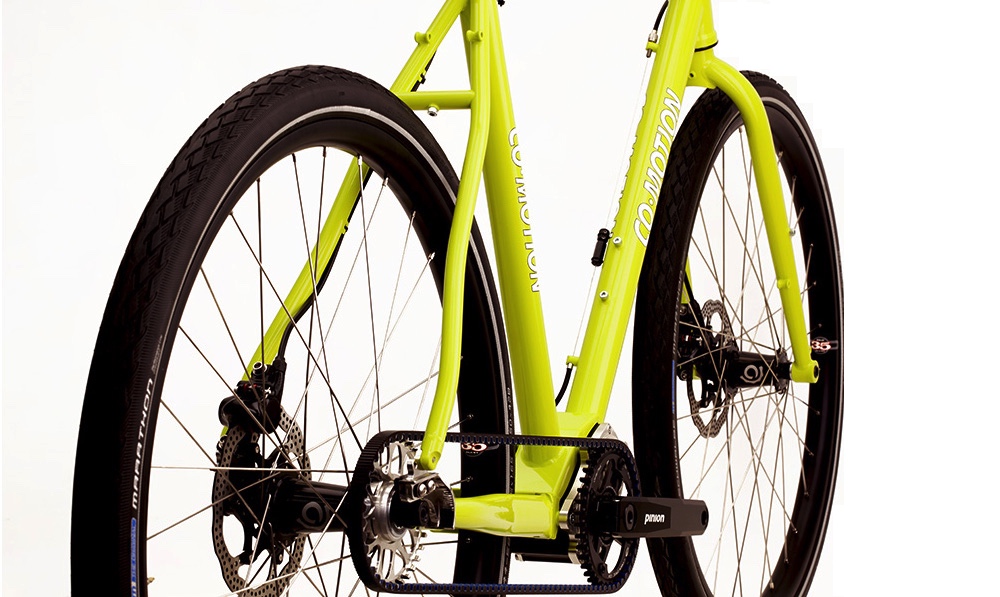 Here’s a guide to finding the stiffest touring frames (if you can’t test a frame loaded with gear):

If you’re a smaller rider, you’ll find less of a difference in frame stiffness between touring bikes. That’s because smaller frames are inherently stiffer thanks to their shorter tube lengths. For extra-small or small (44-52cm) bikes, frame tubing that is a diameter size down will likely be adequate.

Conversely, if you’re tall like me, hunt for frames with the largest possible tubing as you’ll be able to notice greater differences in stiffness. Tall riders with heavier loads may even require a marathon tube that reinforces the bike with extra metal connecting the headtube to the seatstays. That said, marathon frame designs are typically not necessary these days as metal tubing is currently available in larger diameters than ever before. 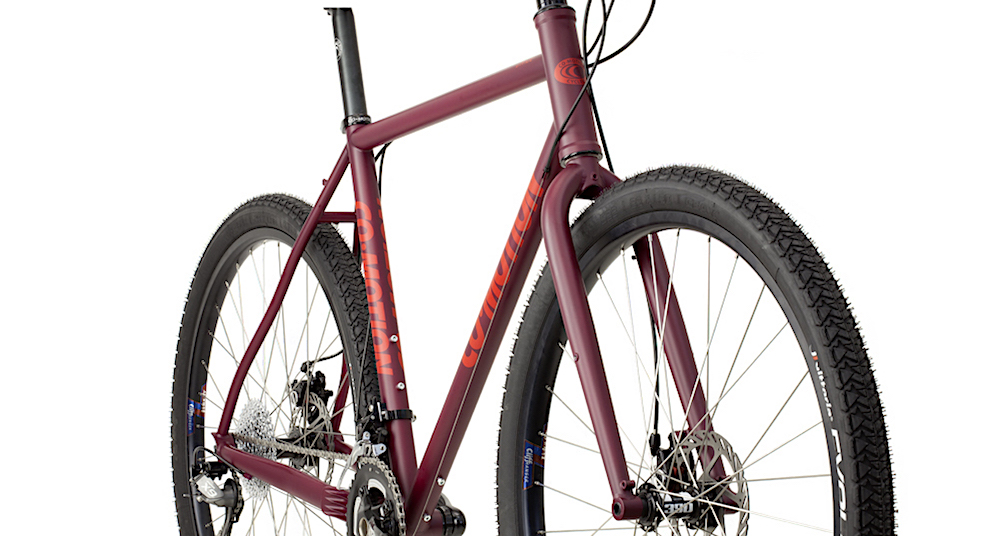 The Co-Motion Divide’s frame tubing is stiff enough to be used on Co-Motion’s tandems too.

When Frame Stiffness Matters Most

Now that I’ve jammed lots of stiffness knowledge between your ears, here’s when it matters.

Front and Rear Touring Loads
The typical touring load distributes weight across the whole bike. The heavier the load, the more stiffness the frame requires to handle the forces travelling through it. For example, I carry approximately 10kg up front and 15kg on the rear, and with this kind of load, the extra stiffness of a steel Co-Motion touring frame is very noticeable when compared to a steel Surly Long Haul Trucker.

Belt Drive Bikes
This stiffness is specifically required for the chainstays and seatstays. In fact, Gates and Rohloff require frames to be “stiffness test approved” in order to not void their warranties. Interestingly, on my steel belt drive bikes, I can make the belts jump on the rear cog under very high amounts of torque. On the other hand, my KOGA WorldTraveller-S seems to able to resist this entirely, indicating that it probably has a stiffer rear construction. 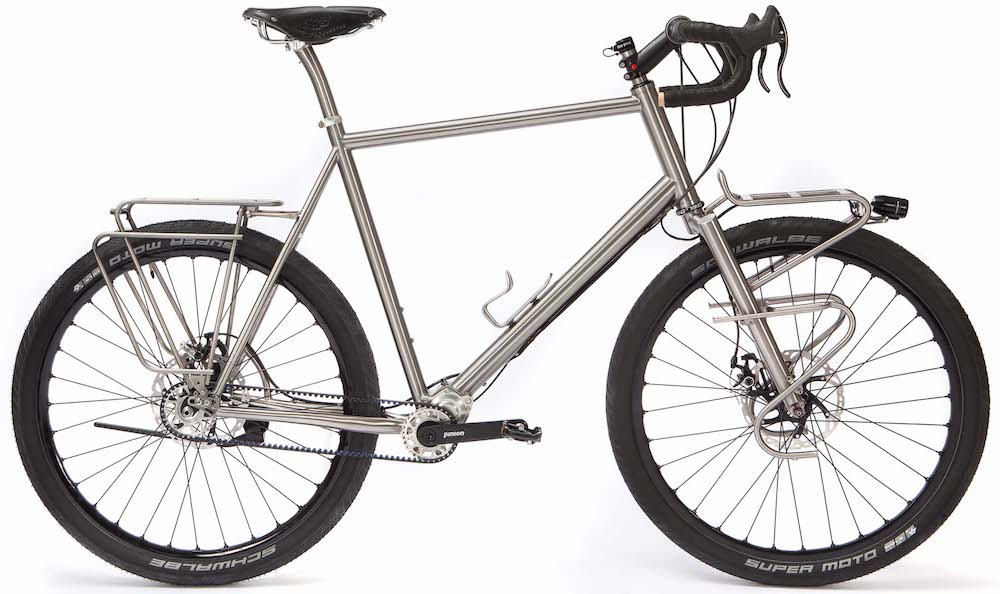 Heavy Front / Light Rear Loads (eg. 2x Front Panniers, a Framebag & Bikepacking Seatpack)
If you’re using a heavy front load with a bikepacking seatpack (or a drybag mounted to a rear rack), you also probably won’t be able to discern between frames of varying stiffnesses.

Light Loads
If you’re packing light – something like 5kg/11lb per end – frame stiffness won’t be a concern either. In fact, with most bikepacking setups your frame will probably be overbuilt in order to suit the full spectrum of rider body weights!

It is often assumed that a stiff frame can’t be very comfortable. But even if this was the case, let’s put bike comfort into perspective.

Bike frames require upwards of 500N of force to flex one vertical millimetre. This translates to barely a millimetre of flex when you apply your body weight to a frame. It’s hard to put an exact number on the vertical compliance of any frame, as the measurements are always taken at the top of the seatpost (you don’t sit on the top tube of your bike, after all).

On the other hand, a carbon seatpost like the Ergon CF3 Pro requires just 69N of force to travel a millimetre. The CF3 Pro will flex around 10mm vertically when you’re simply sitting on the saddle.

But these two things aren’t even your bike’s first line of suspension – that’s the tyres. By applying as little as 10N to a wide tyre, it will easily deform a millimetre or more. Given the low amounts of force required to achieve vertical compliance with a seatpost or wide set of tyres, you’d be hard-pressed to notice the difference in comfort between frames of any stiffness.

Read more about why seatposts are overlooked yet critical for comfort HERE.

Seatposts like the Ergon CF3 or Canyon VCLS 2.0 offer far more vertical flex than a frame (of any stiffness) possibly can.

In order to optimise the stability of a touring bike, an important factor is frame stiffness. With just a few hundred grams of extra frame material, you’ll have a bike that rides nice and stable, as well as being more confidence inspiring. With a good seatpost and wide tyres, your bike will be super comfortable too.

You can determine the stiffness of most touring frames by measuring the diameter of the frame tubing. While this isn’t an exact science, the stiffest touring frames on the market almost always employ the largest diameter tubes. Smaller riders can confidently use touring bikes with tubing that is a step down in diameter than larger bikes.

For light bikepacking setups, or heavy front OR rear loads, frame stiffness is a less important factor. That said, an ‘overbuilt’ frame won’t hurt. I’ve found that you’ll start to notice the positive effects of additional frame stiffness when the light end of your bike exceeds 5kg/11lb.

If you’ve noticed your frame likes to oscillate, other than replacing your frameset, you can also consider adding a trailer which will better distribute a heavy load. I’ve got a list of exceptional bicycle touring trailers HERE.

To Find Out Whether Steel, Aluminium or Titanium Is Best For Bike Travel, Click HERE

A Wooden Bicycle? Renovo Prove That A Wood Touring Bike Is Possible