We’ve all heard it. Aluminium frames are ‘harsh’ and will rattle you to bits while steel and titanium frames are like gliding on a cloud. But is this actually true? Or is it a placebo?

The more I studied bicycle comfort, the more I realised how small a role the frame plays in the overall comfort equation. Actually, my anecdotal experience goes against all conventional wisdom: the most uncomfortable bike I’ve ever swung a leg over was made out of steel!

But as you’ll find out today, it was NOT because of the frame material.

Before we get too deep into this topic, I am not suggesting that there is no difference in ride ‘feel’ or ‘quality’ between bikes of different frame materials. This article is specifically focussed on ride comfort. 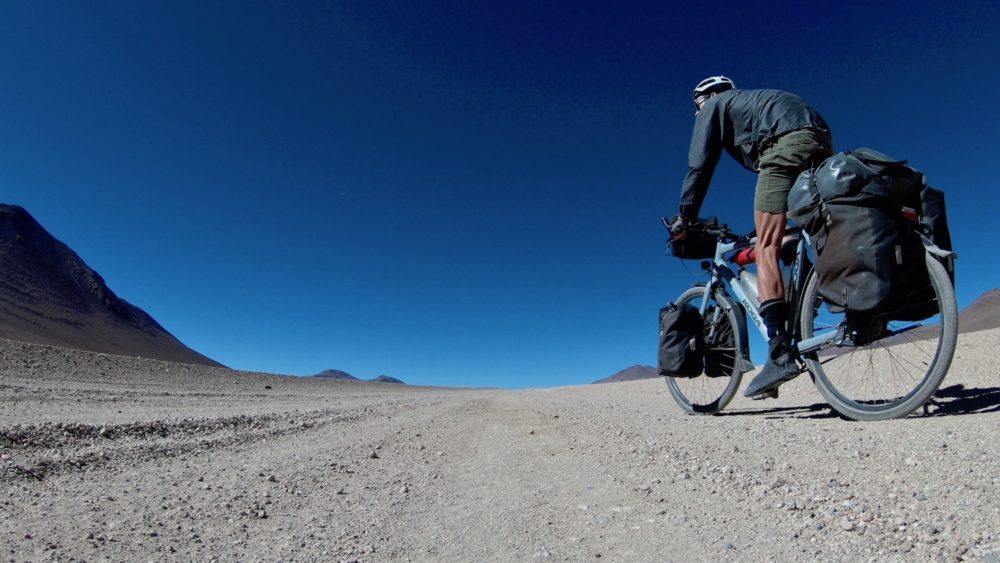 Riding the rough roads of southern Bolivia on my aluminium touring bike.

When it comes to the perceived comfort of one bike over another, there is one important measurement we can take: vertical compliance. This is the vertical distance your body moves in response to inputs from the road or trail. A bike with greater vertical compliance can provide a nice buffer from imperfections in the road.

In other words, your frame sucks at flexing. 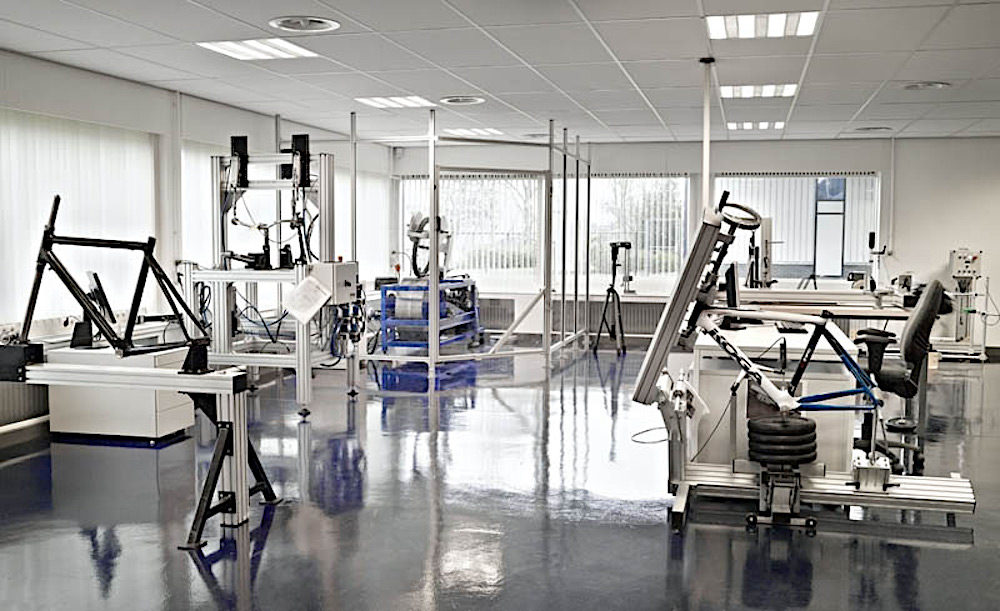 The KOGA Test Centre in the Netherlands measures the strength and performance of their frames.

There are very few tests that have measured the vertical deflection or “comfort” of a bicycle frame by itself. That’s because experiments are almost always conducted using a seatpost inserted in a frame. After all, we don’t attach our seats directly to our top-tubes!

In the 1990s, Bob Bundy did some deflection tests on four 80s road frames. These frames required between 7158 and 14,316 newtons of force to flex the rear triangle just one vertical millimetre.

Let me put those numbers into context for you. A top carbon flex seatpost will deflect the same distance with just 69N force. That’s literally 100 to 200 times less force. 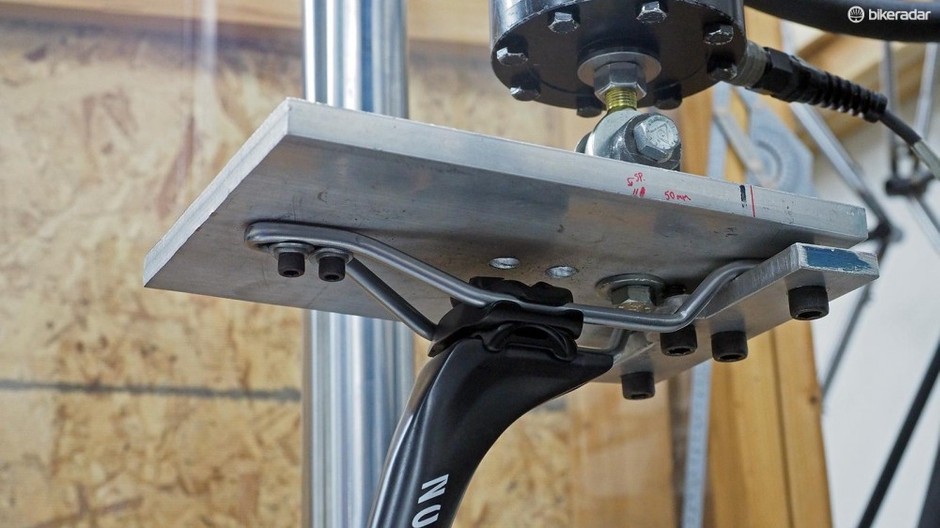 The Canyon S13 VCLS seatpost in for testing at the Microbac Lab. Image: BikeRadar

These days, the best frame deflection testing we have is by Tour Magazin in Germany. They’ve tested the vertical deflection of more than 100 different road bikes, but importantly, these tests measure both the seatpost and the frame.

Interestingly, the vertical deflection numbers of a frame+seatpost test by Tour Magazin, correlate almost exactly the same as the seatpost-only tests by Microbac Laboratories. It then follows that if a seatpost can flex that much by itself, then the frame must be playing a very minor role in the overall vertical deflection. I would not be surprised if the seatpost accounted for 99% of the deflection while the frame accounted for less than 1%.

The Microbac numbers are likely a bit lower because they were tested with the maximum exposed seatpost amount, while the Tour Magazin numbers were tested at roughly 23cm of exposed seatpost (~2-3cm lower). With a shorter lever, you end up with more force required to flex the seatpost the same distance vertically.

You can read more about seatpost comfort HERE.

Deformation graphs on a flat surface from the study ‘Deformation of an inflated bicycle tire when loaded‘ (University of Girona). Interestingly, these tyre sidewalls were ground down so they had a consistent sidewall thickness to help create mathematical models to predict deformation.

Tyre deformation is very complex because there are lots of variables that go into determining the distance a tyre can displace. This includes features like the tyre width, tyre construction material, protection layers, sidewall thicknesses (and how it changes throughout the sidewall), tread patterns, rim width and whether it’s set up tubed or tubeless. Tyres also deform differently depending on the surface they’re interacting with, that’s characteristics like the bump shape and hardness of the surface.

It gets even more complex because tyres do not deform linearly like a seatpost. That means each millimetre of deformation will technically require more force than the previous one.

But let’s not get stuck in the weeds here. The important point is that the force required to displace a tyre by one millimetre is very low. 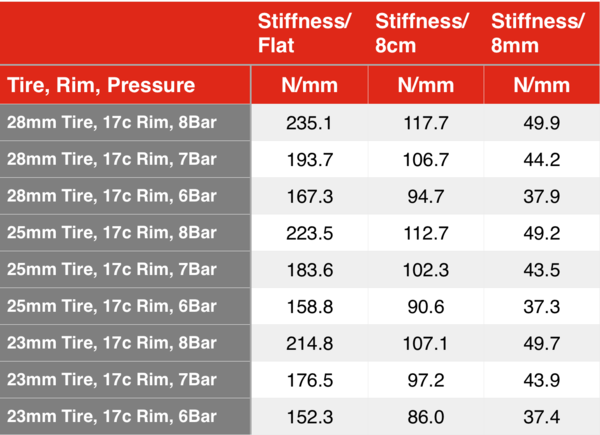 The above table is from the Silca Blog. It shows how much force is required to deform their test tyre on different surface geometries. The left column is on a perfectly flat surface, the middle column is after hitting a ‘cobblestone’ with an 8cm radius and the right column is after impacting a ‘pavement lip’ with an 8mm radius.

As you can see, less force is required to deform the tyre on ‘sharper’ surfaces. On flat and cobblestone-type surfaces, you’ll find a flex seatpost will actually deform more than a 23-28mm tyre, but the tyre will offer the most vertical compliance when you get into the bigger widths. 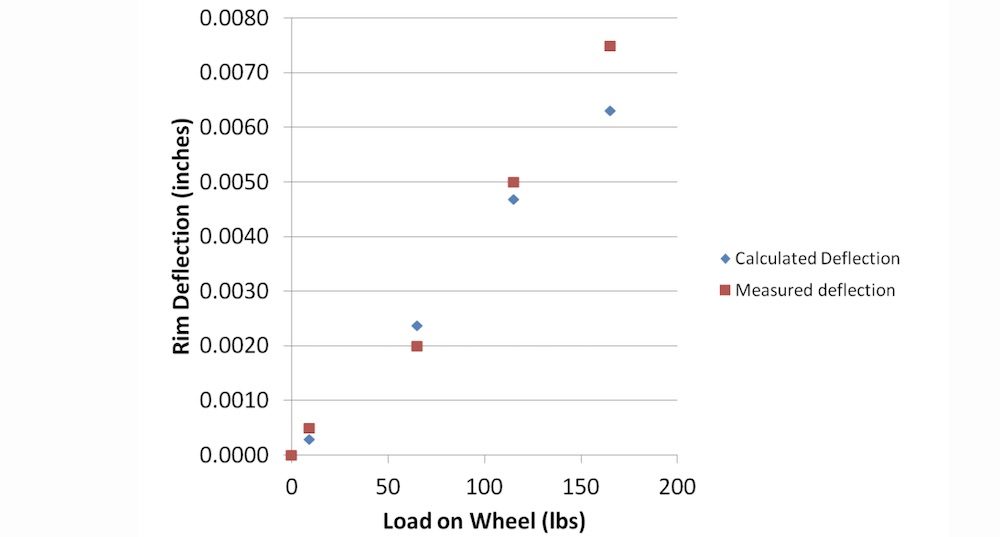 Ok, but what about the rear wheel? We’ve studied vertical deflection on wheels as well, and it turns out they don’t have much of the stuff.

In other words, you require 13 to 20 times more force to move a wheel a vertical millimetre than you do a flex carbon seatpost.

Springs In A Series: Comparing All Deflection Together 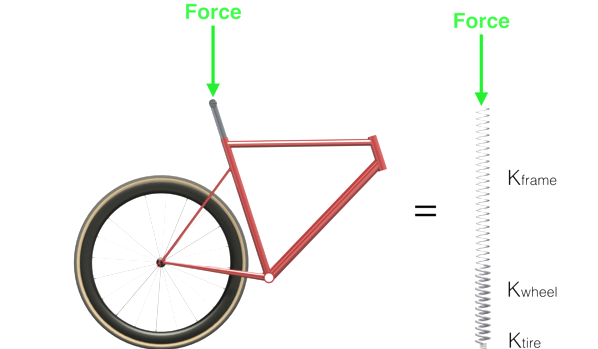 Many components on a bicycle offer some vertical deflection as microscopic as it may be – making them all springs. The system from the ground up is made of springs in this order: tyre, rim, nipples, spokes, hub shell, bearings, axle, frame, seatpost and saddle.

By calculating the rate of springs in a series, we can understand how these parts all work together to provide vertical deflection. Interestingly, when we add up all springs in a series together, the result is a spring rate that is less than that of the softest spring – which is usually the tyre but can be the seatpost if your bike has narrow, high-pressure tyres.

It, therefore, follows that if you can add a particularly fat tyre or carbon flex seatpost to your bike – you are guaranteed a ride that’s comfortable, no matter the frame material. Heck, even the 80s racing frame measured by Bob Bundy (14,000N/mm) will have a low overall spring rate with a flex carbon seatpost installed.

In the table above I’ve calculated the spring rate* for a few different flex seatposts and tyre combinations. This data shows just how much the softest spring dominates. Even with high-pressure road tyres, the spring in a series effect of the flex seatposts results in very little force required to displace your body a vertical millimetre.

As you can see, the flex seatposts play a minor role in the spring rate of a bike with wide tyres. This is the opposite when you’re using narrow tyres – you’ll, therefore, get more benefit from flex carbon seatposts on a road bike.

The spring in a series also helps us to understand how components that require a particularly high force to deflect a vertical millimetre are essentially meaningless in a series of springs. This is because it is always the softest spring, not the hardest – that determines your ride comfort.

*These spring rates apply specifically to the first millimetre of deflection. The spring rates will increase to varying degrees depending on the tyre characteristics as the tyre deforms. 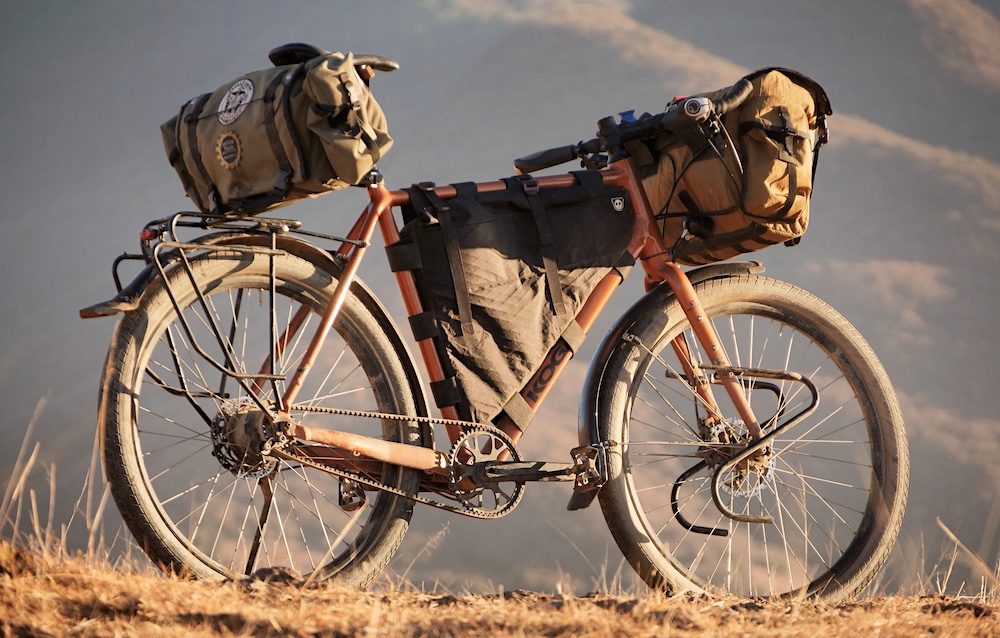 By simply tapping on a metal frame you will find it ‘rings’ as it has rather low damping properties. In comparison, when you tap a carbon frame it makes a dull ‘thump’ sound. This is because carbon fibre inherently has more damping than metals do. More damping equals better vibration attenuation.

That said, we need to remember that a bike frame is part of a larger system. Softer components of your bike such as your rubber tyres, the padding of your saddle and the contents of your luggage are all much more highly damped than your frame. Therefore, the wider your tyres, the thicker your saddle padding or the more soft luggage you strap to your bike – the smoother your bike will feel.

Assuming I’m carrying no luggage, I’ve noticed almost zero damping difference between carbon and metal bikes once my tyres are over about 40mm in width. But on my bikes with narrower tyres, I’ve always preferred the way carbon kills the road buzz. And with luggage attached to any bike, I find them all incredibly smooth to ride.

If you swear black and blue that you can still notice extra comfort in your steel or titanium frame, well, I’m afraid all data suggests it’s just a placebo – which actually isn’t a bad thing if it genuinely works for you!

When we consider all components that move on a vertical plane, your frame material – be it steel, aluminium, titanium or carbon – will not affect your ride comfort. Not only is frame compliance a small proportion of the overall spring rate, but it also becomes completely insignificant when we calculate out the springs in a series.

The most important components for optimising comfort on a bike are your tyres, which will deform at a rate of 10-250N/mm (depending on pressure and width), and your seatpost which can deform at as low as 69N/mm. A carbon flex seatpost will achieve 15mm of vertical compliance before your frame will even move a fraction of a millimetre.

Oh, and by the way – that uncomfortable steel bike I once rode? It was running narrow 22mm tyres, had almost no exposed seatpost and was equipped with a very firm racing saddle. Hopefully, it now makes sense to you why some steel bikes will rattle you to bits, and other aluminium bikes will ride like you’re gliding on a cloud.