This is an age-old battle many riders continue to struggle with today.

Ever since lycra shorts with plump, nappy-reminiscent chamois or  “knicks” were invented (back in the 1900s in a glorious combination of knitted black wool and a leather chamois) they were hailed as official bike wear. Riders of bikes everywhere have gone through the hardening mental process and preparation to wear them…and LIKE them. 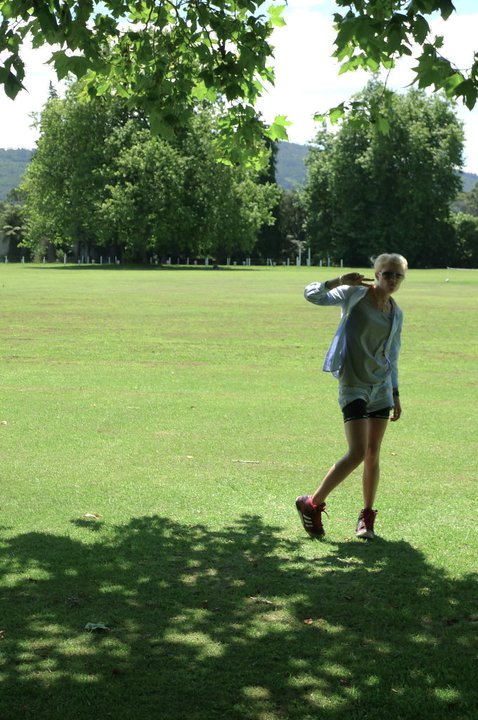 Lycra, worn here demurely with shorty-shorts over the top…

My friend Tim Clarke told me that I’d be a cyclist if I wore them. He said the word cyclist like a cussword, as if it was a sin to extend oneself from being a “rider”  into the realms of cyclist-hood without a bloody good reason. Needless to say, I have both seen Tim in lycra, have gone there (to lycraland) myself and have recommended the wearing of such hideous attire to others. With aplomb.

The first time I wore lycra it was a leotard, and I was dancing and glancing my way through a gymnastics-style performance for my dance group. Bike riding with lycra is similar to performing in it. When in Lycra there is no room for mistakes to be made – no where to hide, it’s all part of the performance: All. On. Show.

The second time I endeavored to wear lycra was to model some knicks for a customer at the bike shop I worked at. They bought two pairs. ‘Nuff said.

The third time I thrust my nether-regions into lycra was before setting off to ride around New Zealand as Alleycat with Alex Denham. He “highly recommend” I wear some knicks and forced me at gunpoint to purchase two pairs.

Once in NZ, I wore them for the first two days. With underpants. Oooohhhhhhhhhh! Such a BAD idea, with a capital U for uncomfortable. These lycra devils (or black-coloured-spanx-in-disguise) are meant to be worn commando.

It was the second night of the journey and Alex and I were in a tiny little hideaway called Tapu Creek, with our own swimminghole and some new friends to boot. One was a Austrian lass who was traveling with her Canadian man-but-not-boy-friend and upon hearing my quiet, gentle and level-headed (read: loud, frequent and unavoidable) complaints about the discomfort I was experiencing whilst wearing lycra AND undies she professed she’d made the same rookie and girlie mistake.

Take ze underwear off, do not wear together. Wear nuzzing underneath

Nuzzing?! Nothing?!
She bemoaned the weirdness of the whole to-go-nude-in-lycra or to-NOT-go-nude-in-lycra conundrum, but assured me that it was not only better but the best feeling she’d ever had. Well ok, not quite, but it was a firm assurance none the less.

Needless to say I boycotted any and all (under)pant wearing the rest of the few-week trip!

So, to lycra or not to lyrca you ask?
Lycra. Always lycra.

(Just make sure to get a size that fits you in the REAL world, not in magic imaginary-I-really-am-a-size-zero-world!)

Seatposts: Often Overlooked Yet Critical For Your Comfort (Lab Testing)

Saddle Comfort For Cyclists: How To Treat and Prevent Saddle Sores