This top-10 list has been compiled using data collected from 150 travellers who have completed epic cross-continental bike journeys. These cyclists, including myself, were asked to list their three favourite countries along with the reasons why.

The way I’ve ranked this list is simple. Each of the 150 cyclists got three votes to cast, and I simply tallied up the results. In the end, 80 different countries were favourited, which is pretty cool because that means most corners of the world have something, for somebody.

Incredibly, 18% of all long-distance cyclists in the survey agreed on one country in particular – and I don’t think you’ll be able to guess which country it is! 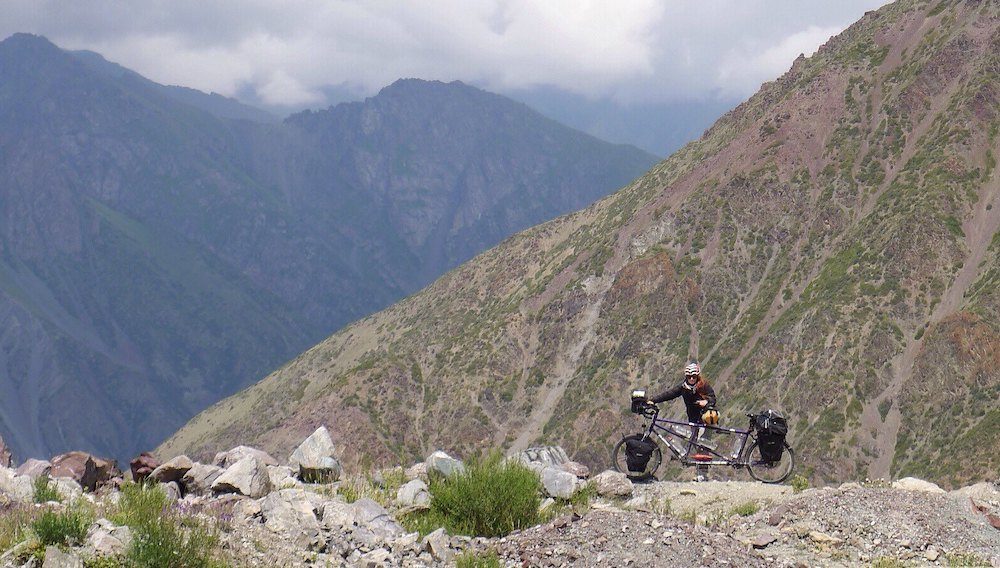 Coming in at #10 is Kyrgyzstan.

This Central Asian country is exactly as exotic as it sounds, offering wild camping under picturesque mountain backdrops, along with gorgeous traffic-free backroads and challenging remote cycling routes through the grassy hills of the western Himalayas.

The Kyrgyz families you’ll meet will be exceptionally-friendly – they spend about half their time with huge herds of horses in the most isolated pockets of the country, welcoming you into their yurts – gold smiles glimmering – to experience one of the last truly nomadic cultures. My advice to you is to politely decline the fizzy horse milk that will inevitably end up in your hand!

Kyrgyzstan was favourited by 12 long-distance cyclists. 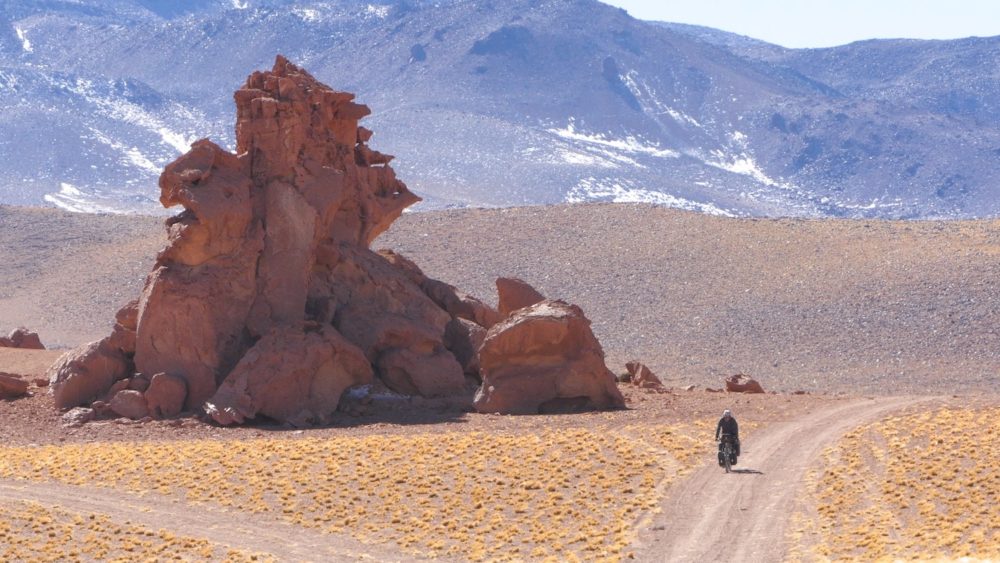 Chile is over 4000km long, which allows it to offer almost unbelievable geographic variations, from the high altitude moon-scapes and crystal blue lakes of the north, to the temperate rain forests of the south, to bobbing icebergs in the Patagonian Ice Field and jagged peaks of Torres del Paine National Park.

In Chile, you’ll find endless dirt roads across dry deserts, past picture-perfect lakes, over 5000m high passes, and through fresh conifer forests – and you can basically throw a stone and it’ll be the perfect place to pitch your tent.

It’s worth noting that long-distance cyclists often voted for Chile and Argentina together as the region known as Patagonia. I decided to award half a vote to both these countries, but if Patagonia was a country, it would rank third on this list.

Chile was favourited by 13.66 long-distance cyclists. 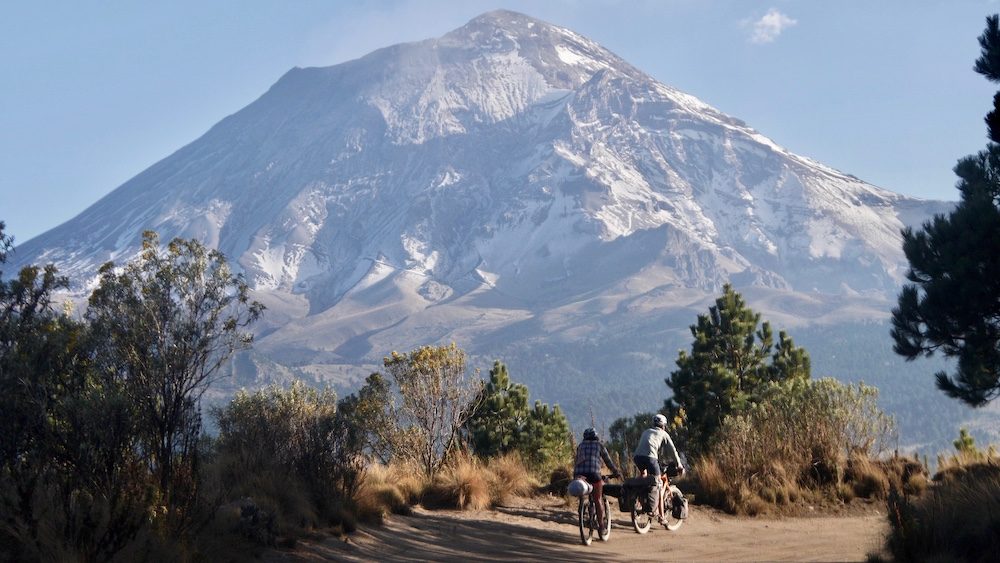 Running an equal sixth place with two other countries, Mexico is a developing country gifted with incredible landscapes, a fascinating history, a rich culture and a world-famous cuisine. You will find yourself cycling through vast deserts, across rugged mountains, into evergreen jungles, and along endless beaches.

Go off the beaten track to discover the most-friendly Mexicans, including large indigenous populations who speak languages you didn’t even know existed. And make sure to immerse yourself in the expansive ancient ruin sites to imagine what life would’ve been like as a Mayan or Aztec all those years ago.

Mexico was favourited by 14 long-distance cyclists. 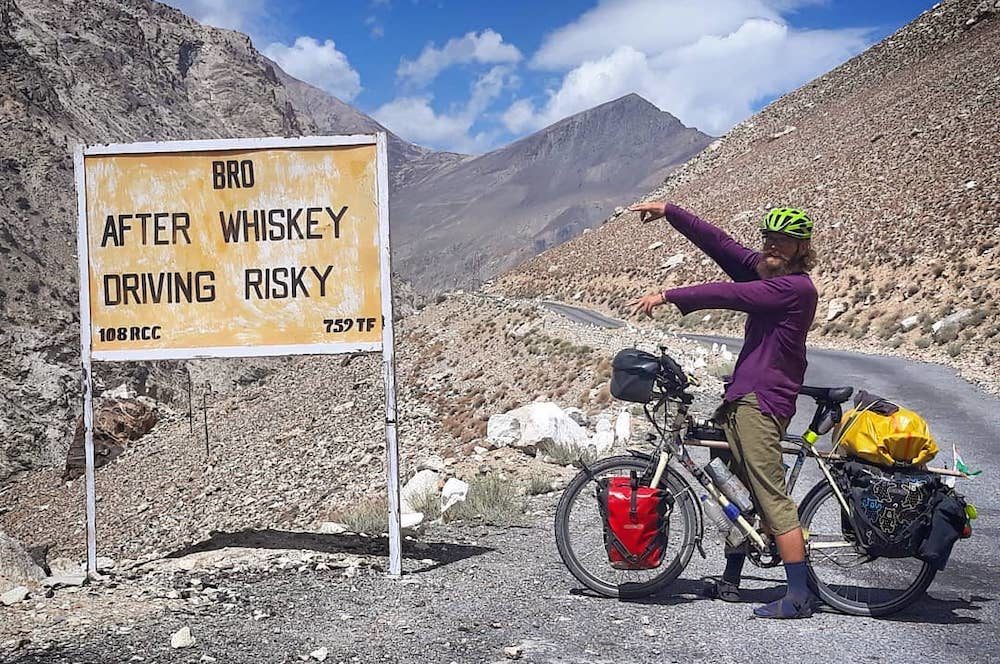 When you first arrive, it’ll be an attack on your senses, with vibrant colours, the best and worst smells, loud horns and the excitement for life that Indian cities are renowned for. The rough roads in the breathtaking mountainous north are the popular zone for bike travellers – there you’ll discover quiet roads, hill tribes, clifftop monasteries and traditional cultures.

For a real challenge, check out one of the highest roads in the world in Ladakh, which exceeds 5000m in elevation.

India was favourited by 14 long-distance cyclists. 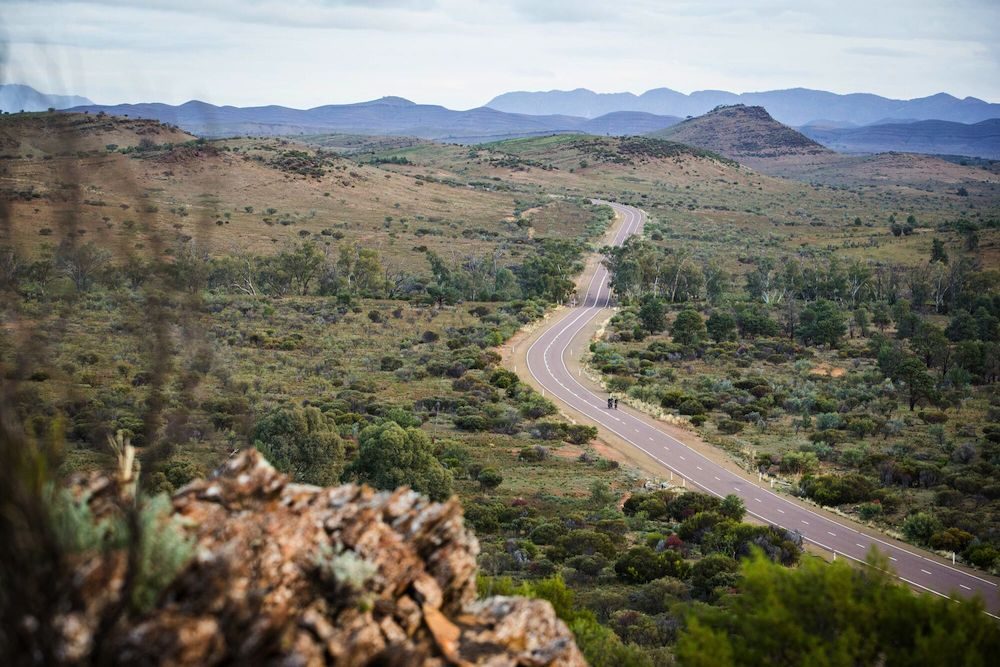 As an Australian, I’m pretty stoked to see my own country liked by so many bike travellers!

Australia is the world’s sixth-largest country by landmass, and is home to a continent’s worth of different landscapes, along with the oldest continuous culture in the world – the Aboriginal Australians. The crimson red centre offers never-ending dirt roads, open horizons and a very testing climate. Tracing the coasts, you’ll find everything from the best beaches in the world, alpine terrain (complete with snow cover), colossal-sized coral reefs, lush rainforests and an abundance of strange animals – which I think are the coolest on Earth.

There are hundreds of little historic towns in between the very cosmopolitan cities; make sure to drop past the pubs to discover the one-of-a-kind Australians that frequent them.

Australia was favourited by 14 long-distance cyclists. 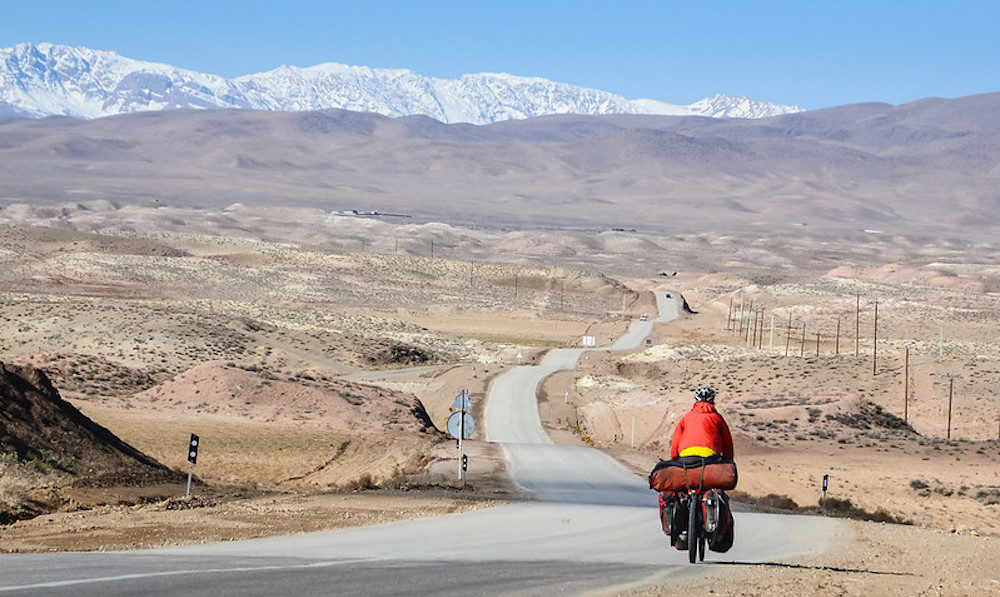 Iran is the most misunderstood country in the world, both culturally and geographically.

The Iranian people could not be any more different from the governments representing them. Iranians will stretch your perception of what it means to be kind and open, and they will show you just how much more you can give and share in your life. As a cyclist, you will be offered friendship, city tours, food and a place to stay almost every day, with no strings attached.

The landscapes are also much more than a desert – Iran has four seasons, a mountain range with peaks towering over 5000 metres, dense forests and an abundance of wildlife. Mix in the unique Persian culture, and long and fascinating history, and it’s not hard to see why Iran is a touring favourite.

Iran was favourited by 16 long-distance cyclists. 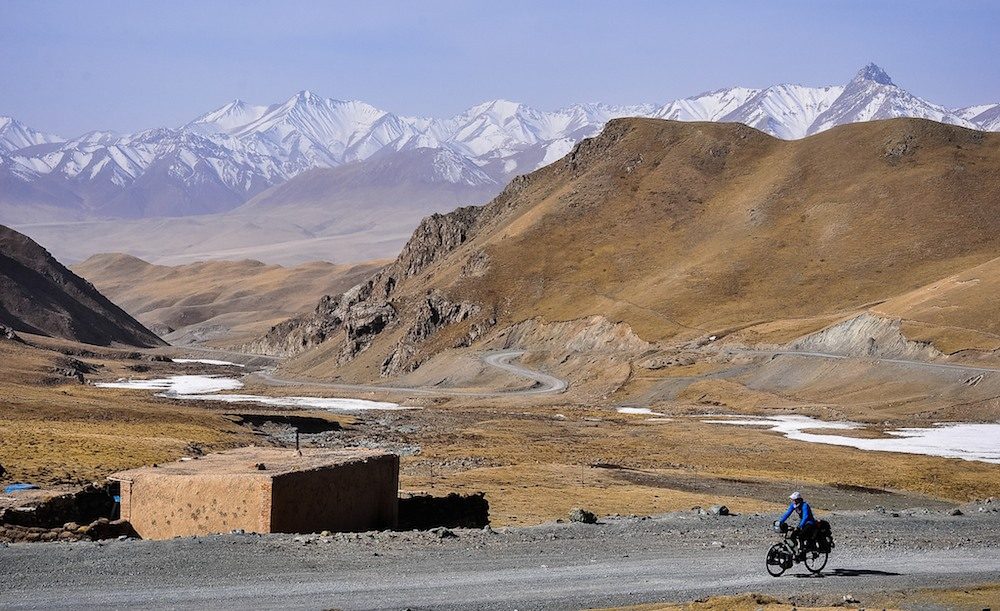 Touring from Qinghai to Gansu in China. Image: BrakingBoundaries.org

Along with India, China is one of the most polarising destinations in the world.

The culture feels foreign to even the well-travelled, so it’s the kind of place you need to take by the horns and accept the myriad of challenges it will throw at you. As you make your way across the provinces, you’ll be discovering some wildly curious people who live in a country that operates very differently to your own. Immerse yourself in the historic towns, amazing food

If you’re drained by the idea of a large population, 19 out of 20 Chinese people live in the eastern provinces, which leaves the rest of the country surprisingly empty with vast areas of gorgeous nature.

China was favourited by 17.5 long-distance cyclists (the other 0.5 was awarded to Pakistan as part of the Karakorum Highway). 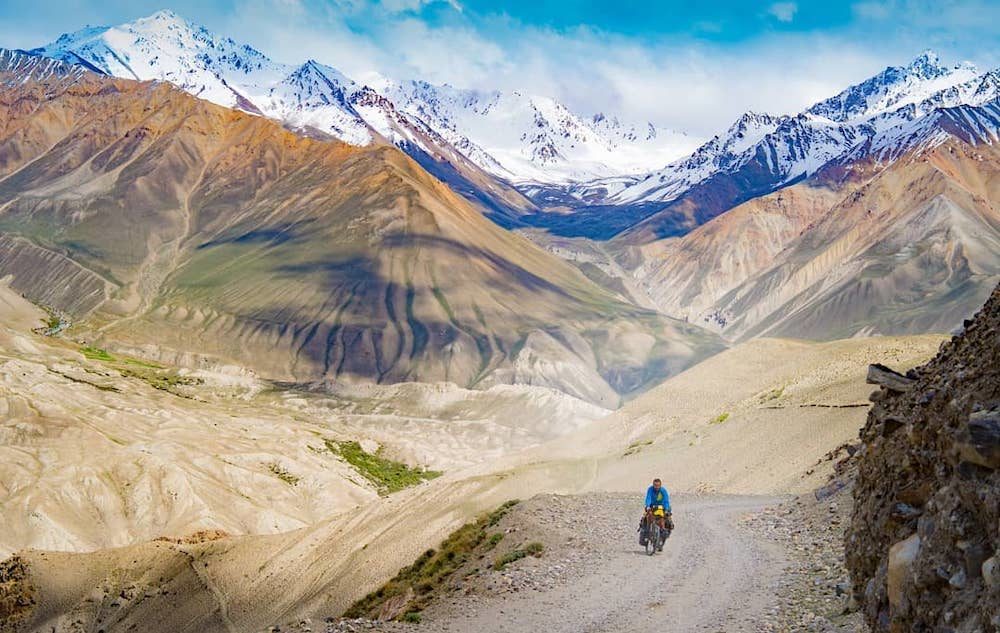 Coming in at number 3 is Tajikistan with its famous Pamir Highway cycling route.

Although a superhighway of bike tourers in the summer months, the route is still rough and testing of you and your equipment. Ride along rollercoaster sections of road, past rusting tanks and crumbling watchtowers and parallel to mountains that are so remote they’ve literally never been summited.

Tajikistan was favourited by 23 long-distance cyclists. 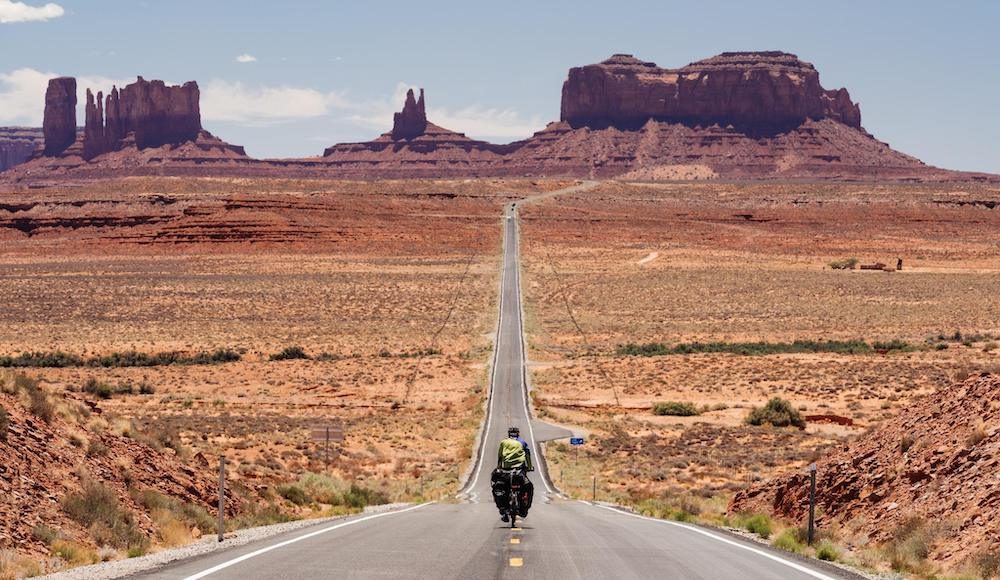 The United States of America is home to a diverse network of ever-changing environments, making it ripe for being explored on a bike. The landscapes include everything from wild rock formations, through to deep canyons, vast desert expanses and pristine redwood forests.

If you prefer solitude, there are enough low-traffic roads to keep to yourself, but if you’re feeling more social you can take on popular bike routes such as the Pacific Coast to bump into like-minded travellers. The best cycling routes have been mapped by the Adventure Cycling Association, who provide information about their touring network which currently spans a staggering 47,000 miles. Although the big skies make it feel like it, you are never too far away from services in the USA.

The USA was favourited by 24 long-distance cyclists. 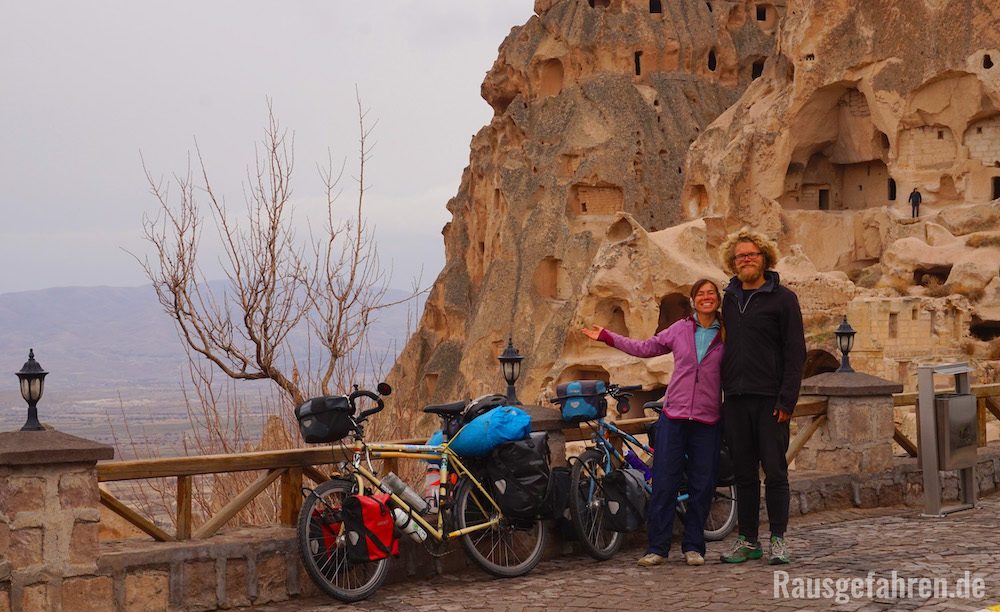 The country voted the long-distance cyclist’s favourite is Turkey. It’s also right up there for me, but I had no idea that 18% of bike travellers agreed!

Turkey is a dream destination that offers the complete package, from quiet roads, to idyllic towns, sunny beaches, diverse landscapes, and a very interesting cultural bridge between Europe and Asia.

Turkey has a long and fascinating history, with ancient ruins dating back as far as 12,000 years, along with cheap and tasty food and a great climate for cycling, even in winter. The cherry on the top is the warm and welcoming Turkish people who offer extreme kindness to bike travellers, inviting you over to share a sweet çai (tea), a game of backgammon and maybe even a place to stay.

I really shouldn’t be surprised by Turkey coming in at number one, it pretty much ticks all boxes – from comfort to curiosity. As a result, I think it certainly deserves the top spot on this list.

Turkey was favourited by 27 long-distance cyclists.

Not Surveyed But Love Crossing Continents? I’d Love to Hear Your Three Favourite Countries In The Comments Below