This month in Bolivia I rode across the largest salt flat in the world and pedalled into the Yungas Mountains. I discovered a road with 52 hairpin turns, I may have found my favourite sealed road in the world, I found out about cocaine production, I was gifted lots of food and I cycled up “the world’s most dangerous road”!

MY BIKE: Koga WorldTraveller Signature
MY GEAR LIST: My 25kg of stuff
MY ROUTE: HERE
MY CAMERAS: Panasonic GH4 and GoPro Hero6 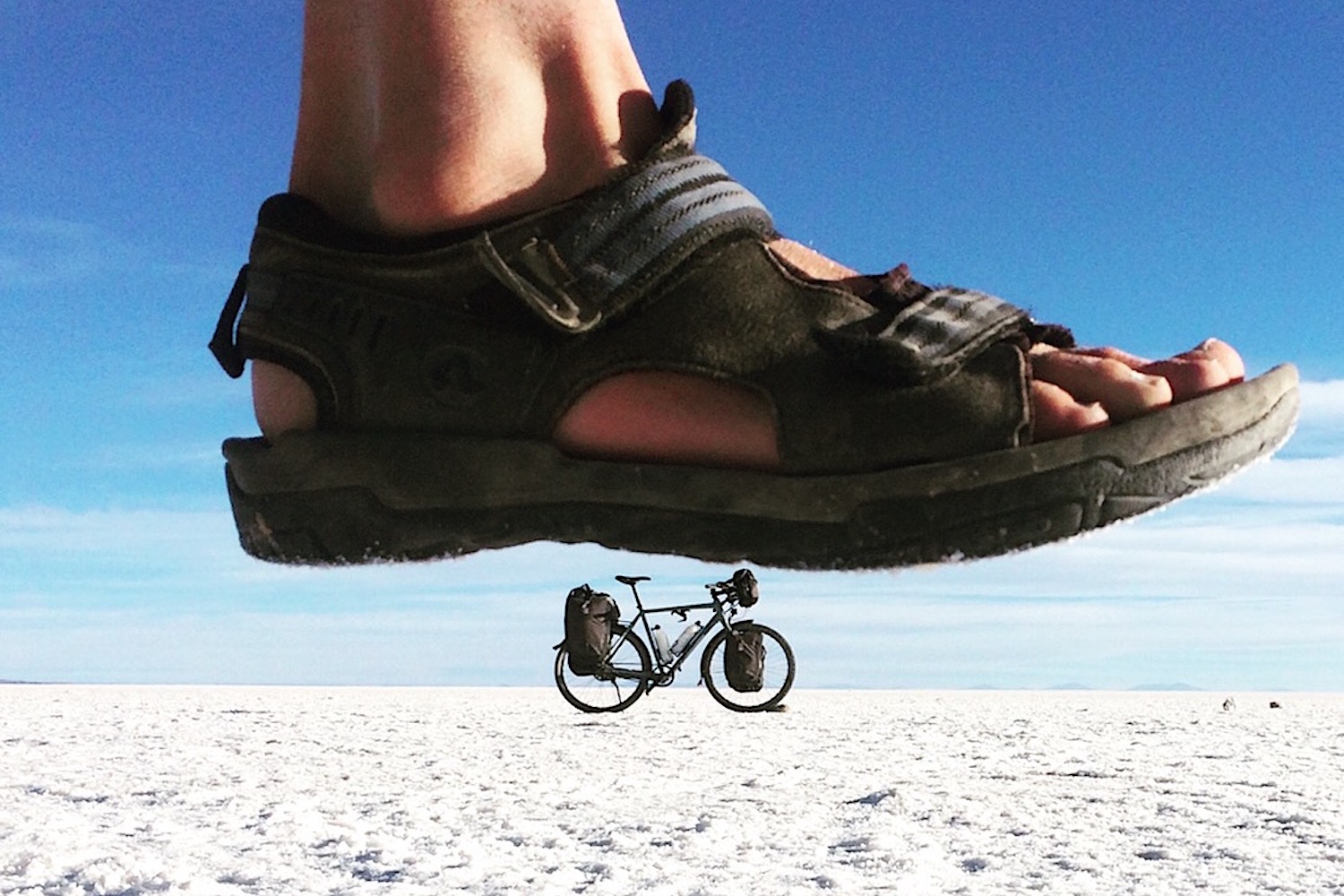 Just beginning this solo journey from Argentina to Alaska was a GIANT STEP for me. I had to give up the comfortable predictability of my home life. I had to say goodbye to my friends and family. I had to give up my weekly rituals, my bikes, the prospect of a partner and the access to any food type that I could possibly desire. But this giant step will have taught me a bit more about people and the world, and will have given me endless time to get lost in my thoughts and ideas. Right now I’m six months into CyclingAbout The Americas, and I’m certain I took the right, giant step forward. 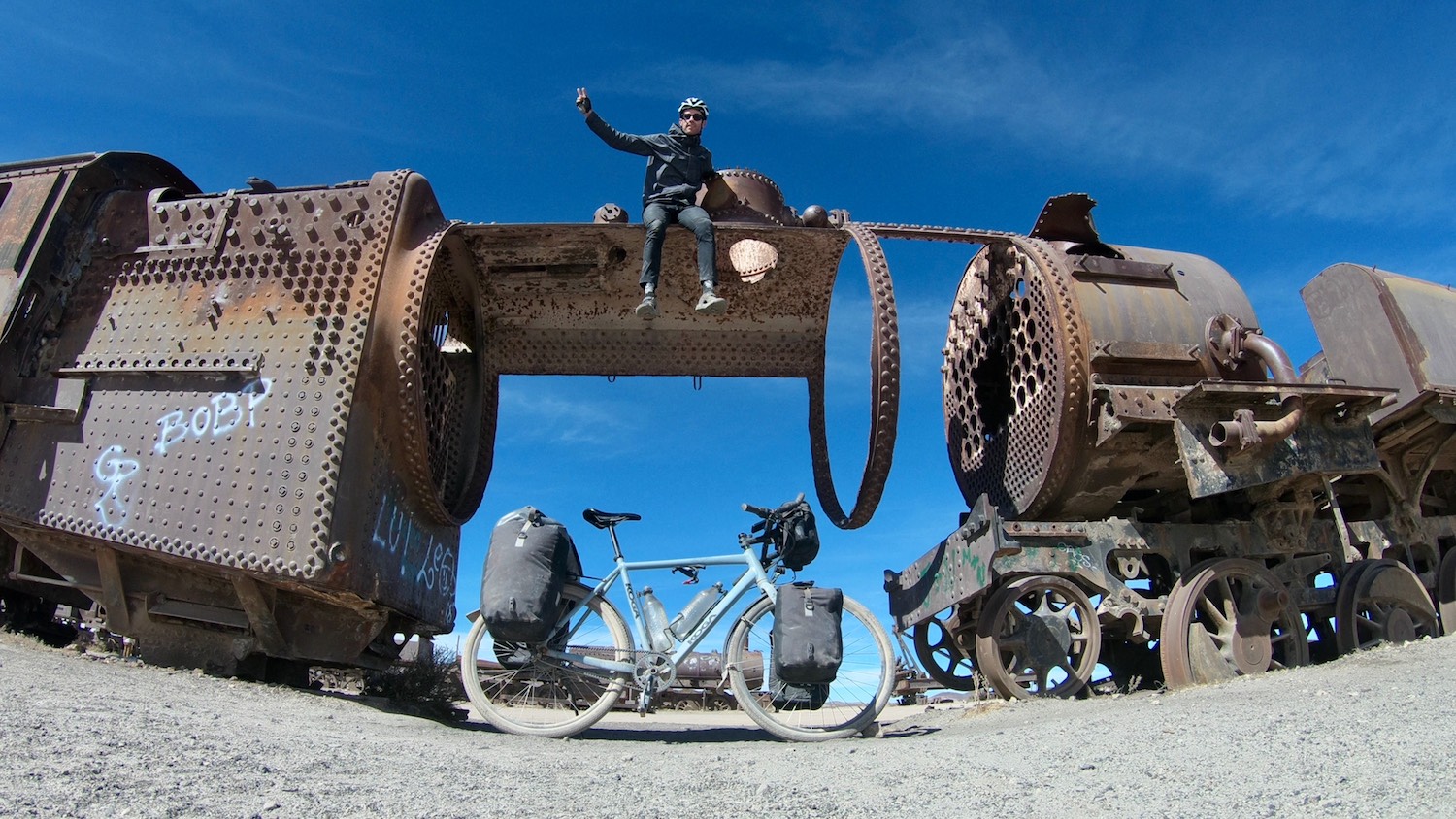 Yo! This was once a steam train, but now it’s rusting at 4000m in Bolivia! Built by the British, this train has been living right here since the 1940s when the mining industry collapsed. No wonder it’s missing its boiler! 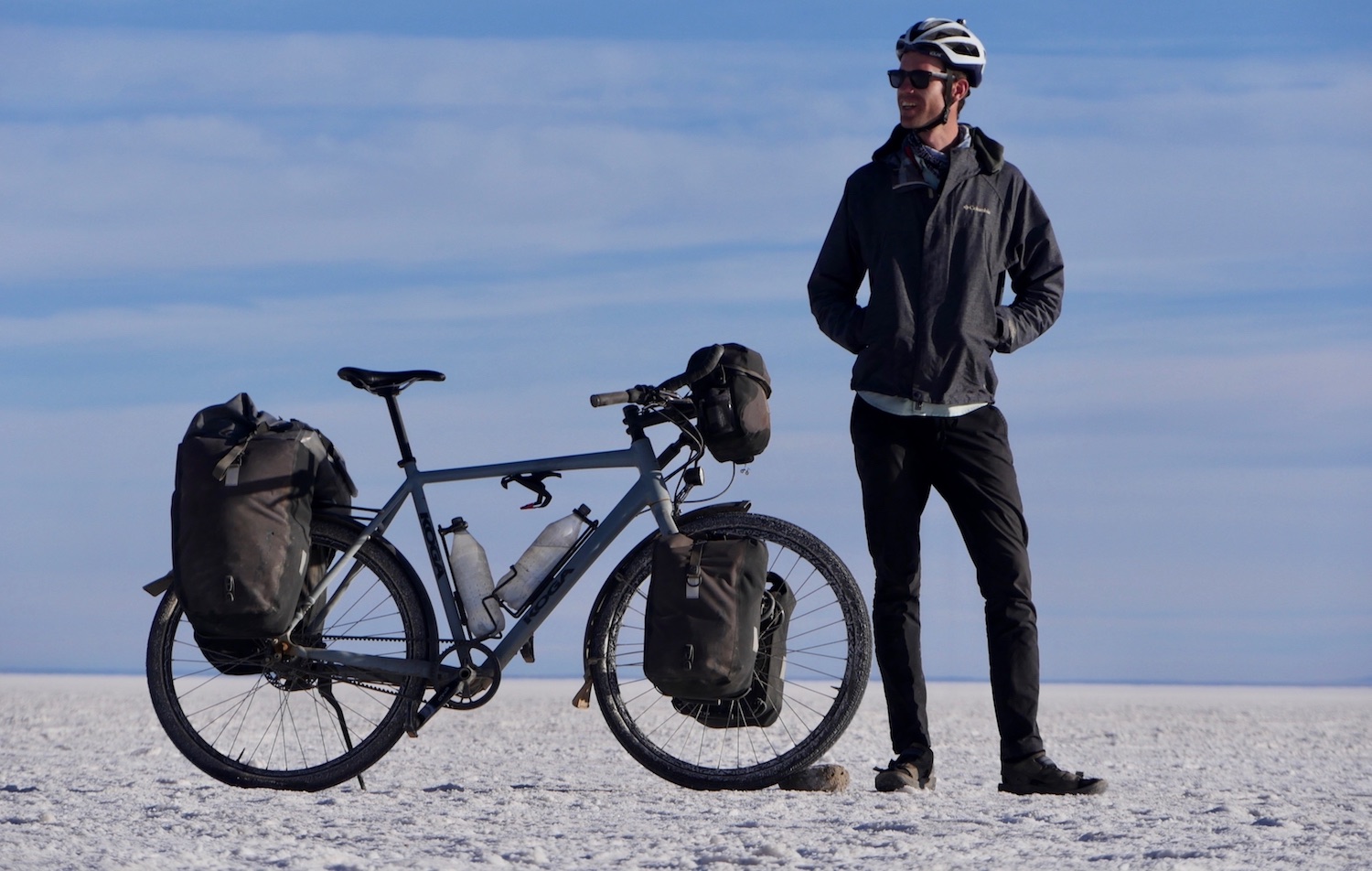 I’m pretty stoked to be able to say that I travel to some of the most remote areas of the planet, on a bicycle no less – without consuming any animal products. Did you know that the latest research shows that without meat and dairy consumption, global farmland use could be reduced by more than 75%? And that loss of wild areas to agriculture is the leading cause of the current mass extinction of wildlife? That’s insane – being vegan is the least I can do for the planet which I spend so much time exploring and appreciating. On the Koga Signature order form, I left the kickstand box unchecked. I hadn’t needed one for the previous 10 years of touring, why would I need it now? But when I picked up the bike there was one fitted. Koga said, “just try it Alee, if you really don’t like it, you can throw it away”. I reluctantly accepted their request. Skip forward a few months into my trip and I broke a bolt on the kickstand. I had to remove it for a while, and it was then that I realised how much I missed having it. I use it every time I get off the bike; to snack, to take a video. The rear-mounted setup with the Koga’s steering limiter will stay upright almost ANYWHERE except in the sand. Can’t believe I was so close-minded about kickstands for so long!! 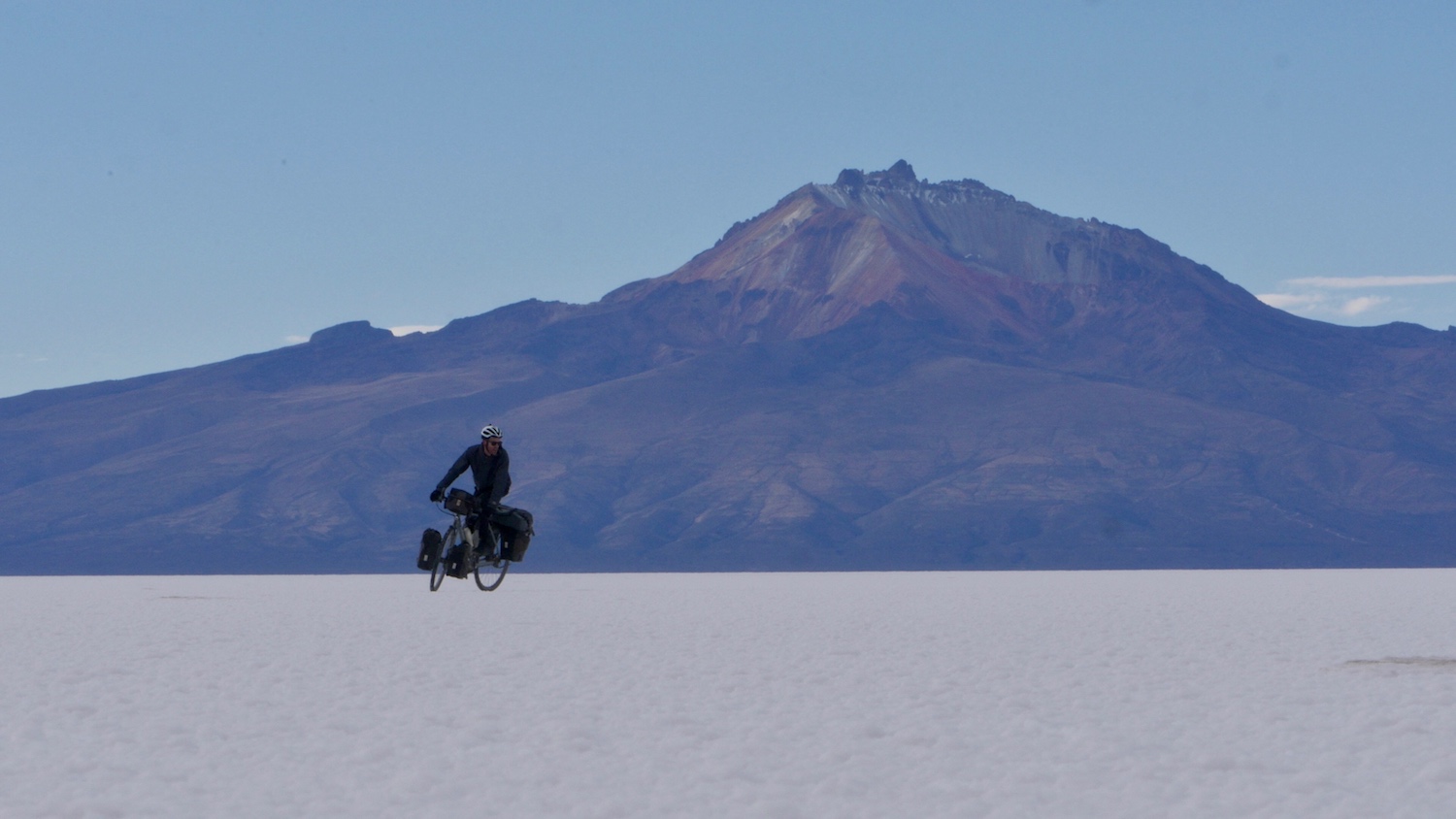 The salt flat drags on and on after the novelty wears off! It’s like being on a treadmill; everything always looks the same and the horizon never appears to get any closer! After two nights on the Salar de Uyuni, it was relieving to finally have dirt under my tyres again. 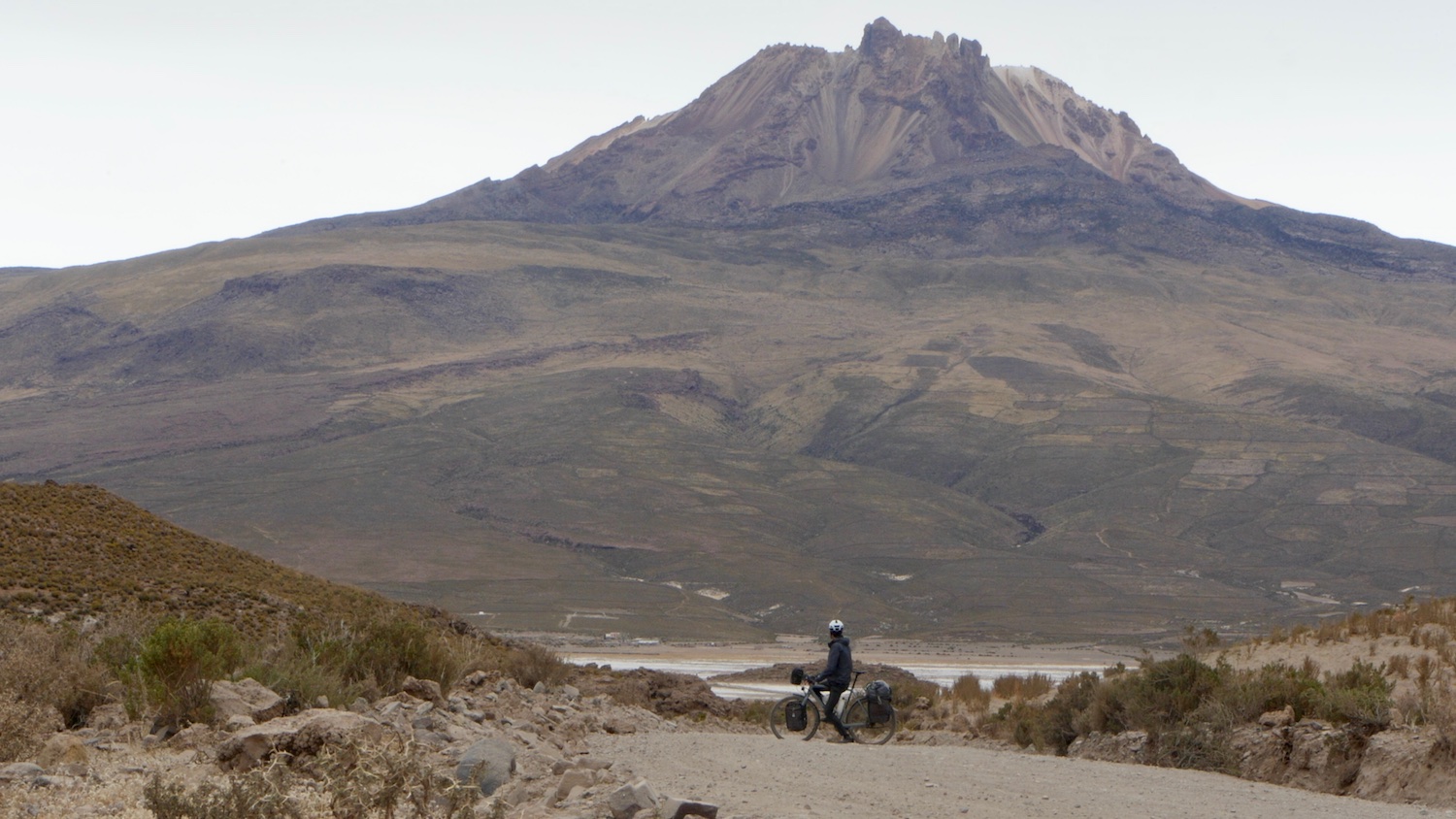 On overcast days in Bolivia, the white from the sky washes the colours out of absolutely everything. Here I am waiting for the volcano to erupt so that the landscape can be livened up again! 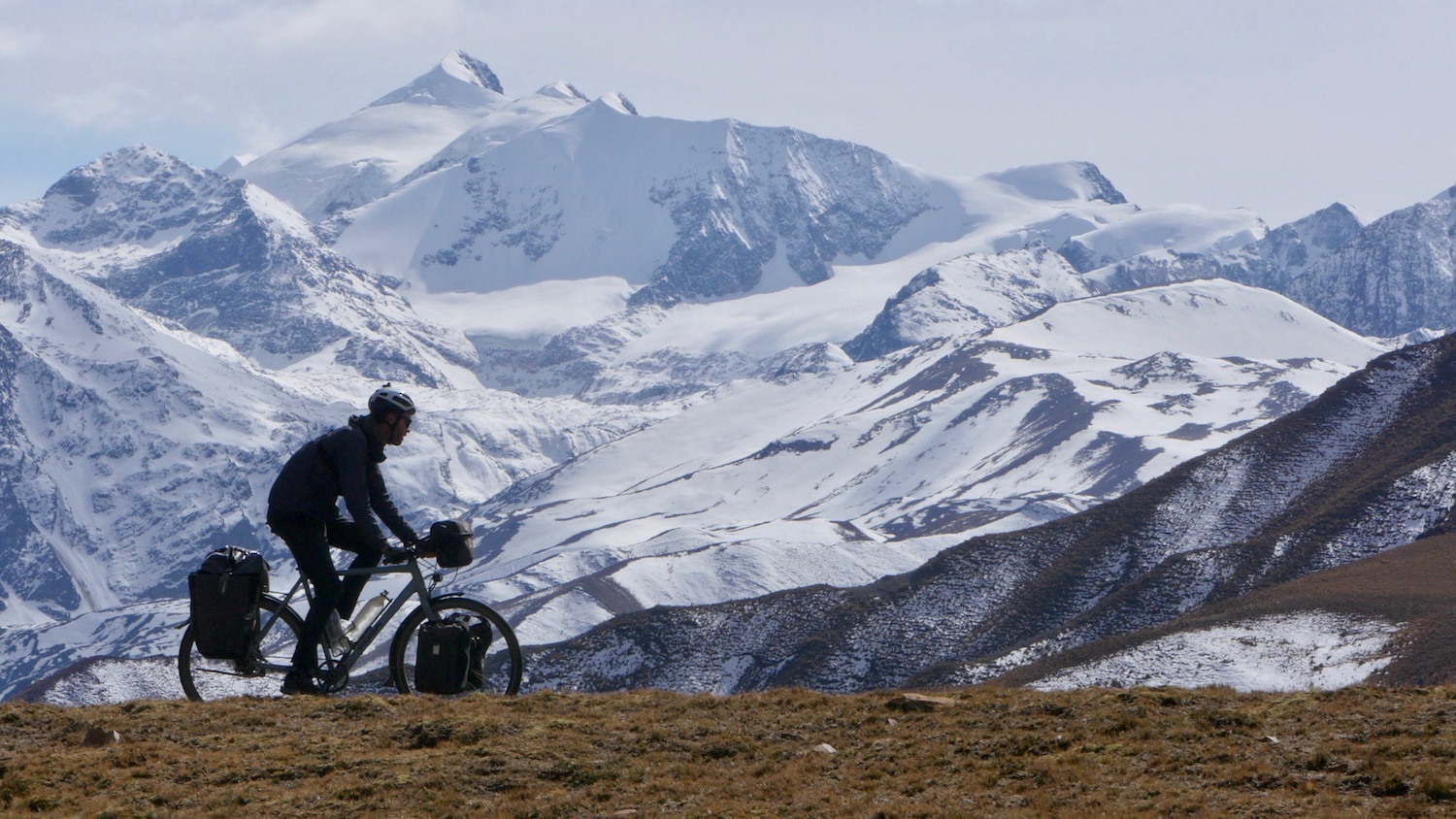 I was looking at my topographic maps and determined the precise location for the most incredible viewpoint… ever. The only problem was that there were no roads or paths to get there. So I spent a while forging my own path across the rough, swampy land and ended up blissing out right here! 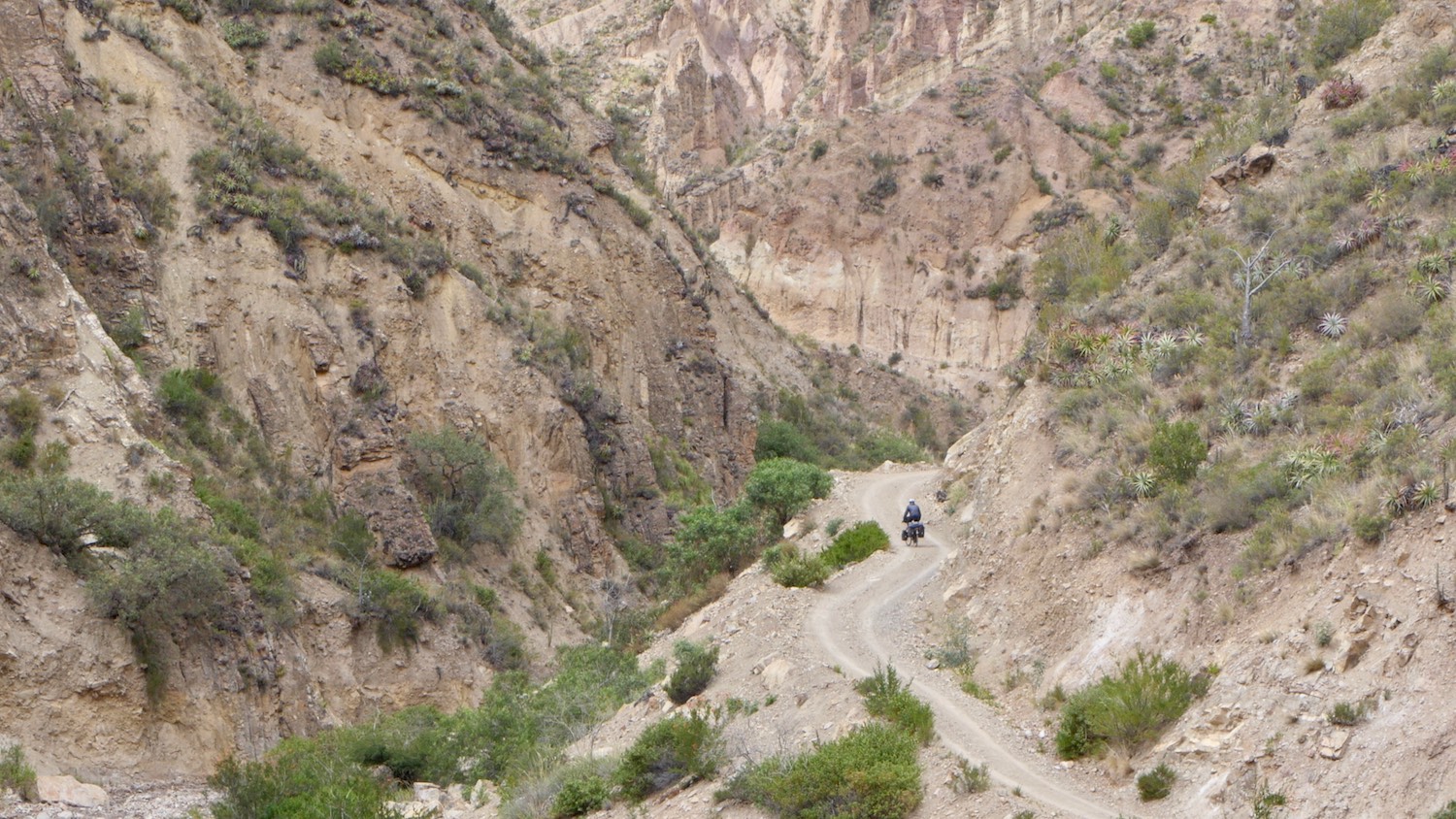 Bolivian Villagers: “Where are you going?”
Me: Quime.
“You’re going the wrong way!”
No, I’m going to Quime this way.
“But it’s impossible on a bicycle.”
Me: 😎 It’s a pretty nice feeling to find yourself above the clouds and snow on a llama track that offers such wild panoramic views of the Cordillera de Quimsa Cruz (and a certain death if you fall off the edge). 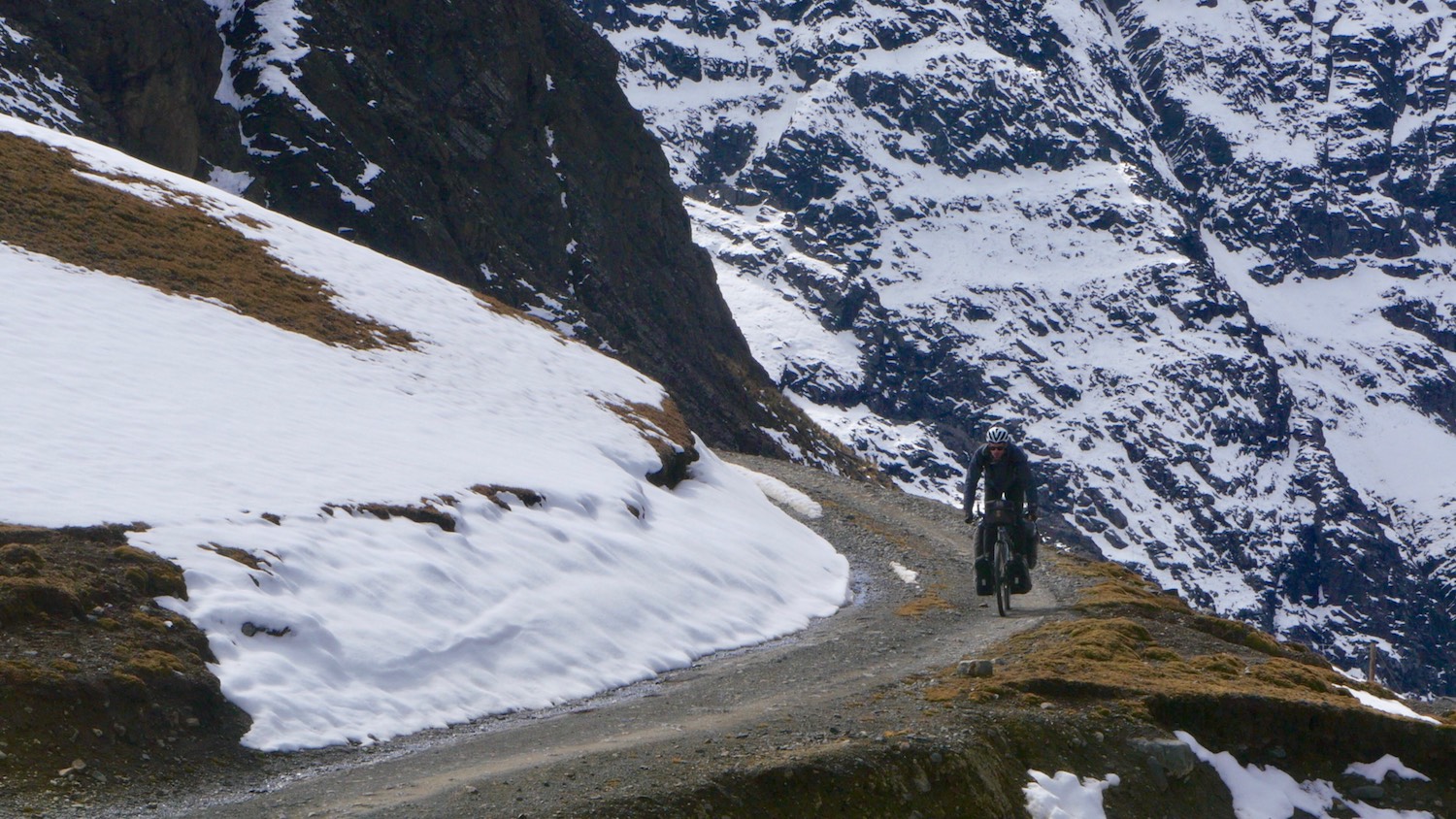 For the first time this trip, I’m really struggling to get anywhere. That’s because Bolivia is a massive network of mountain trails and small villages, and I want to explore ALL of them!! I’ll definitely be coming back here to finish off what I started, preferably with a friend (or 3) to share the experience. 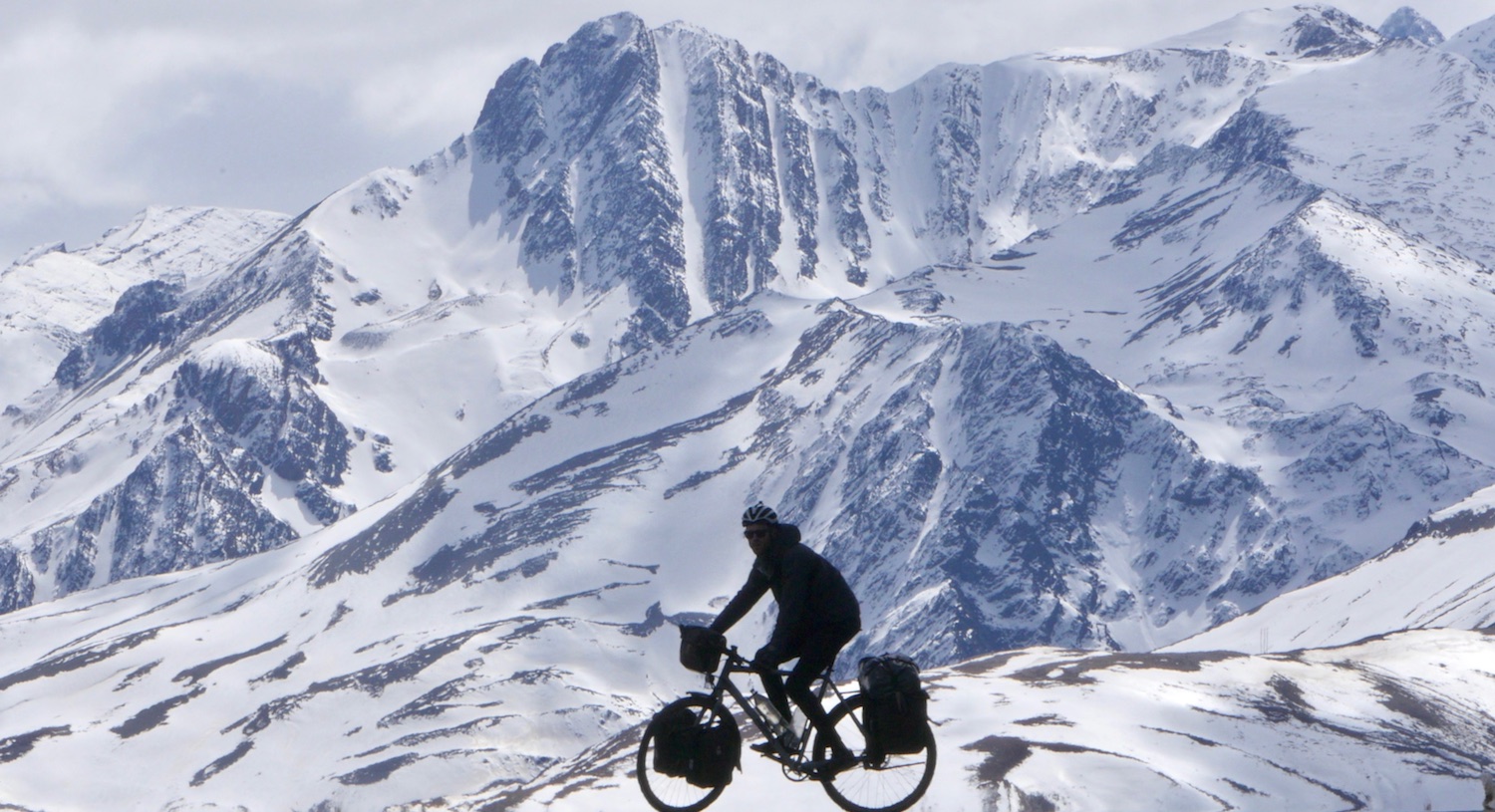 So stoked on Bolivi(YE)a(H)! Not even a green screen can project a backdrop this good. 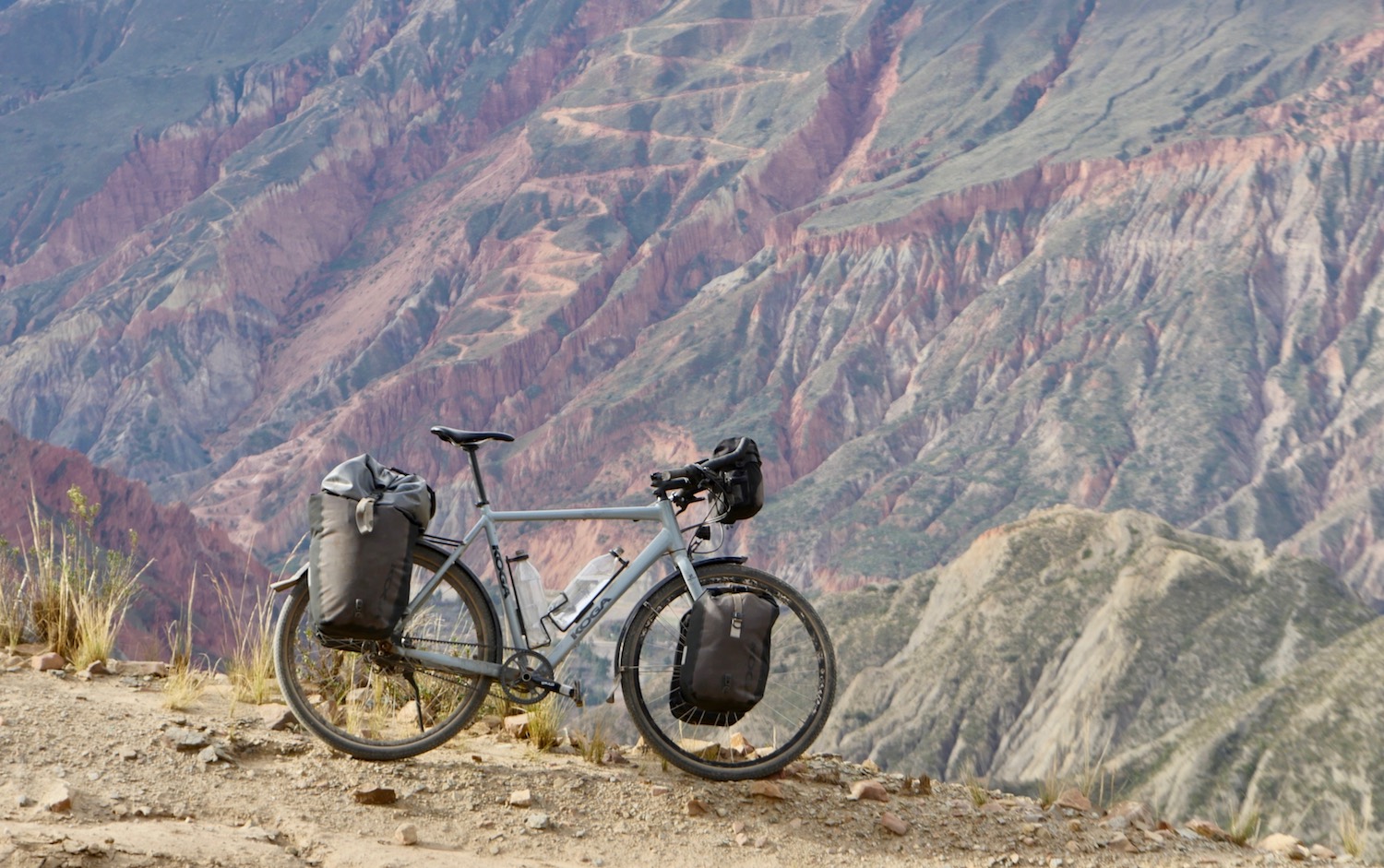 HAIRPIN TURNS. These are my life at the moment. I’m either grinding away up a steep canyon or dropping in from the sharp peaks of the Yungas Mountains. My switchback turn record this trip is 52(!) in a row. There can’t be many roads in the world with more. 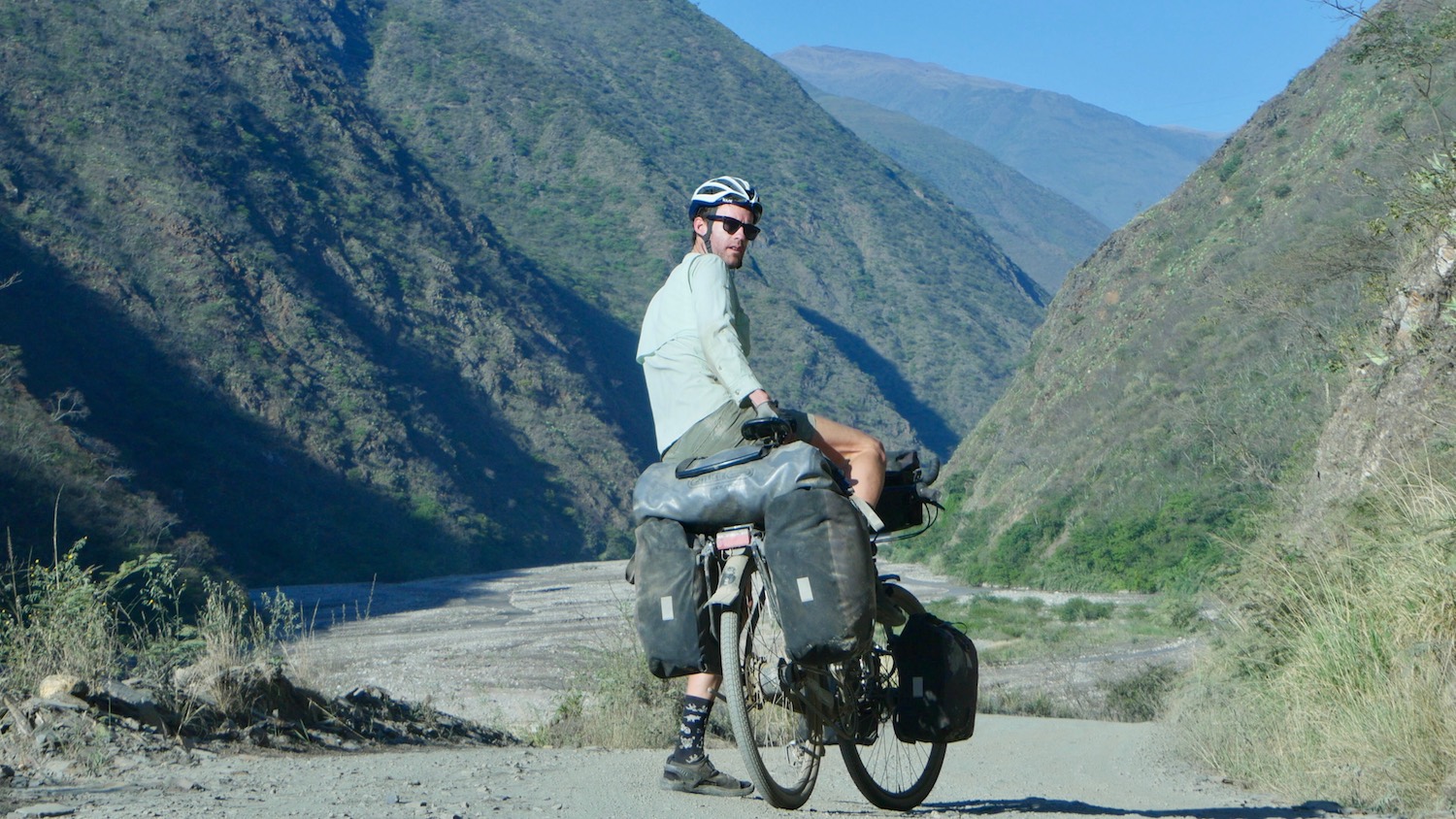 You’re probably thinking I’m the biggest narcissist ever; I feature in almost every photo I take! But over the years I’ve found that I can relate most to travel photos when a rider or two is cycling through an interesting landscape. I almost always imagine myself as the cyclist in the photo at that particular place and moment in time, and wonder how much I’d enjoy being there too. Is it just me, or do you find yourself doing this as well?!? 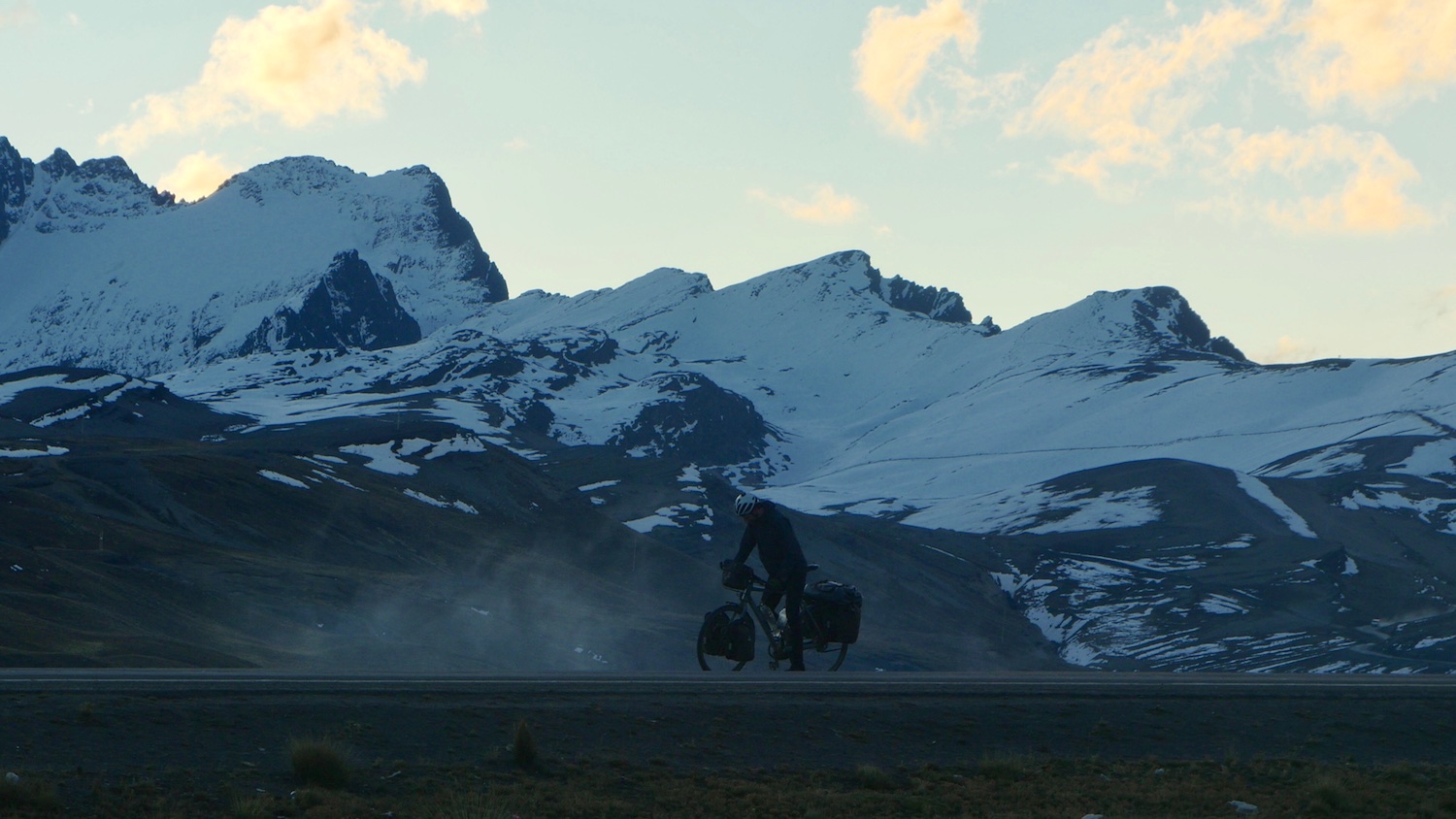 I smile to everyone whose eyes meet mine. I try to make people laugh. If I’m eating something on the side of the road I offer it to people passing by (farmers love sweet biscuits!). I reduce the suffering to animals by not eating them or their products. I try to buy stuff without packaging. I say no to plastic bags and I pick up other people’s rubbish when it’s convenient. I try to spread bike travel knowledge and inspiration far and wide because it’s the thing that brings me so much joy. All of these things require a bit of effort, but I figure that by doing them every day I can help create the world I would most like to live in. 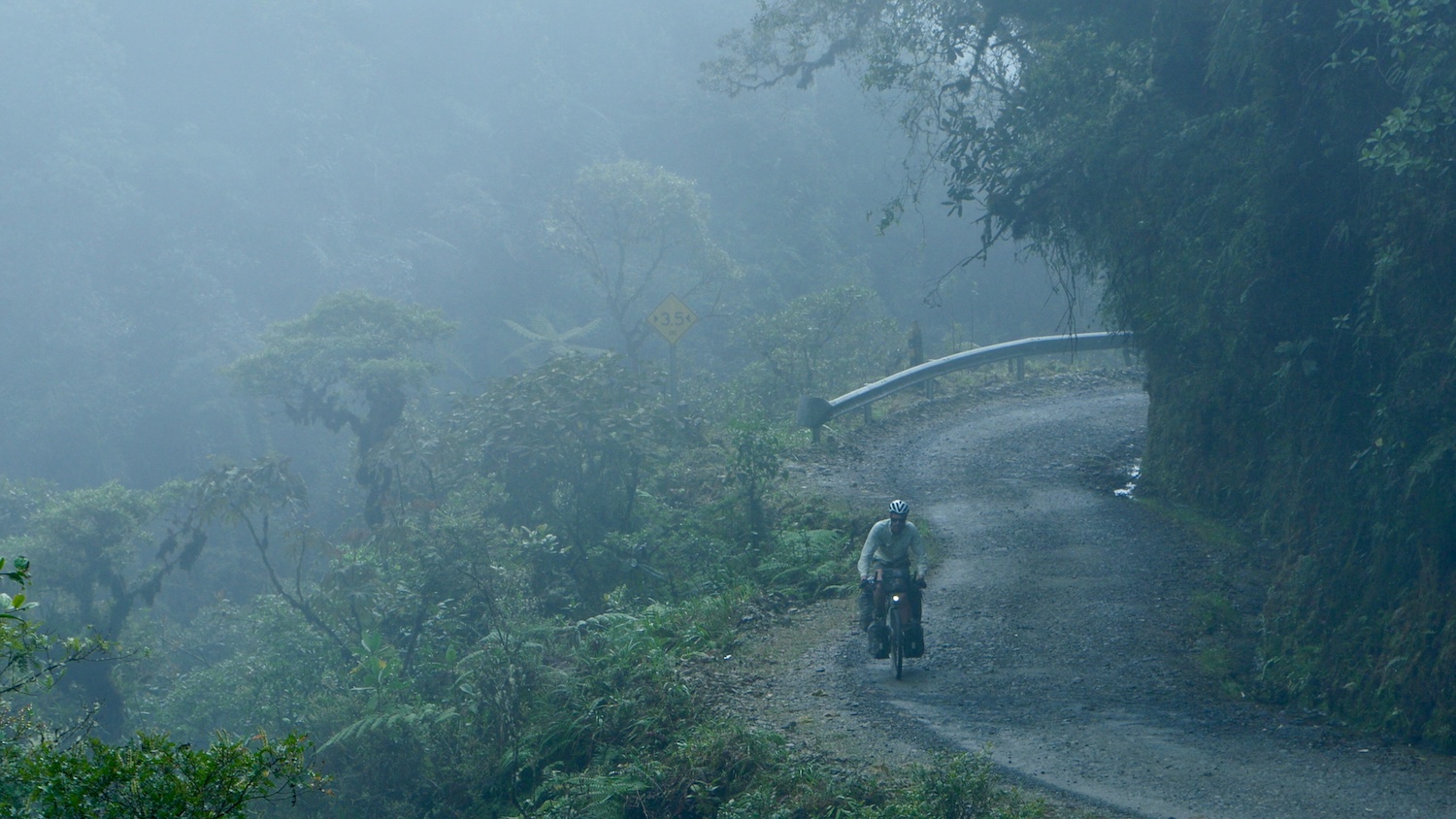 Confirmed: wet & moody mornings on a bike are still better than being inside. 💚 Camping out on the Uyuni Salt Flats! ⛺ The stars are absolutely INSANE with so little light pollution. 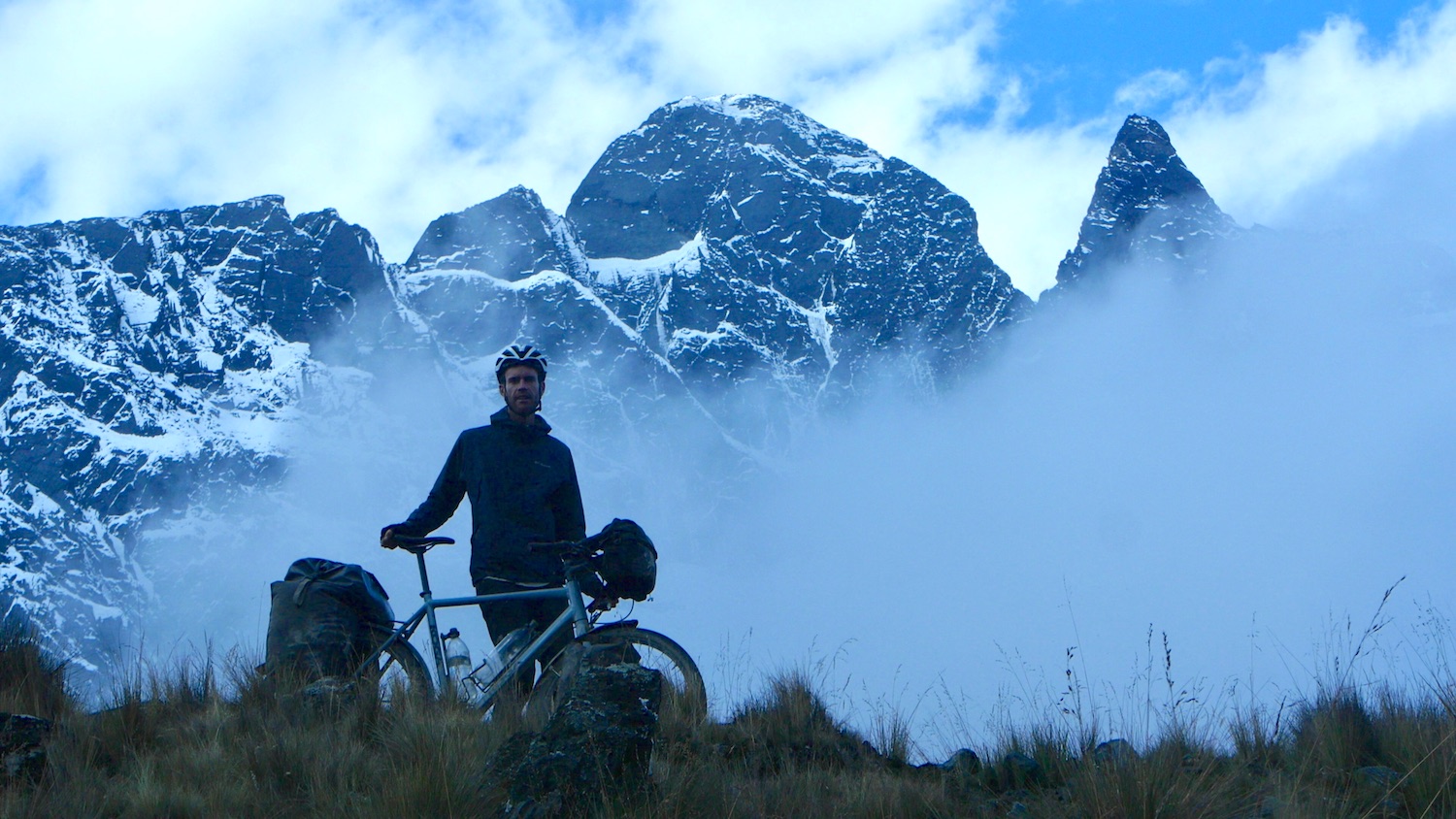 This month I rode across the largest salt flat in the world and pedalled into the Yungas Mountains. I discovered a road with 52 hairpin turns, I may have found my favourite sealed road in the world, I found out about cocaine production, I was gifted lots of food and I cycled up “the world’s most dangerous road”! My latest video is HERE. 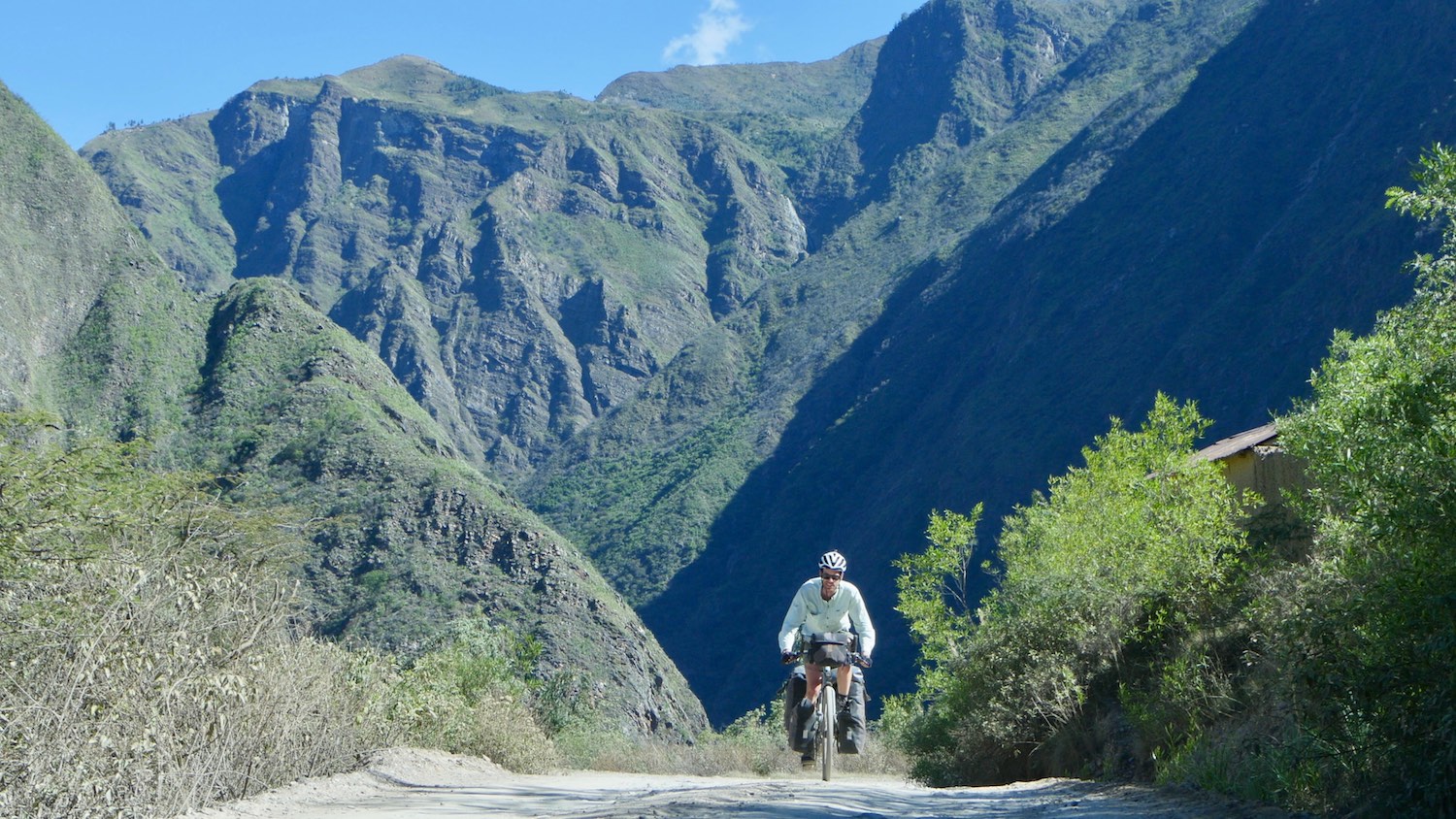 If you’re partial to a bit of climbing, it doesn’t get much better than the Yungas mountains in Bolivia. In one day you can be pushing your bike through snow at 5500m and then drop into the rainforest at 1000m. You won’t see another tourist, it’s just villagers who want to know where you’re heading. If you chat for a few minutes they’ll probably even give you some fruit or corn from the garden too. There are enough towns here to not need a tent or cooking gear, but I’ve enjoyed camping every night with a view. Oh and cars… what cars!!? 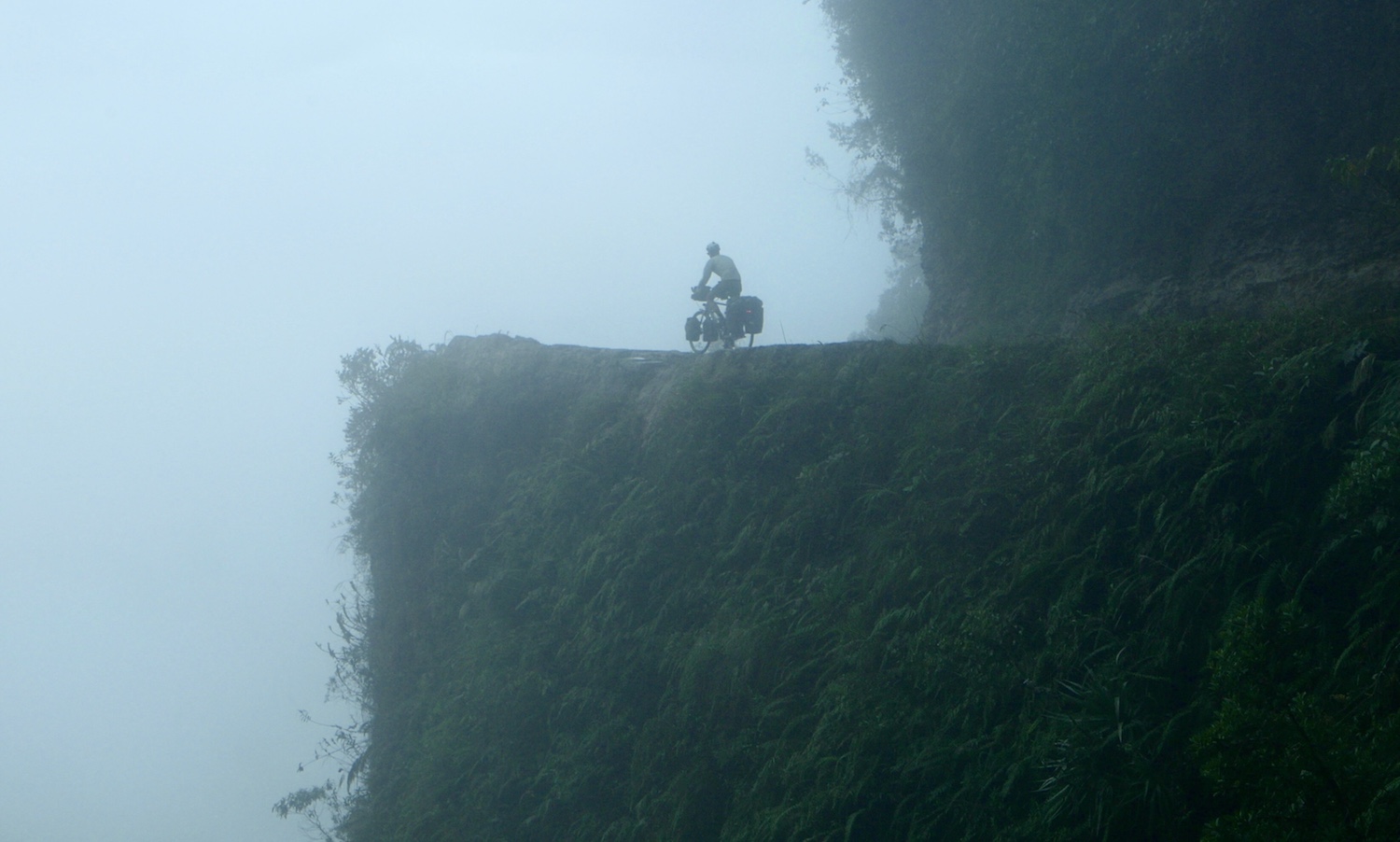 Have you heard of Death Road? It winds its way up the side of a mountain and for the majority of the time you’re just metres from a sheer drop (to your death, naturally). But not that I’d know!! I was in the clouds for almost the whole thing! 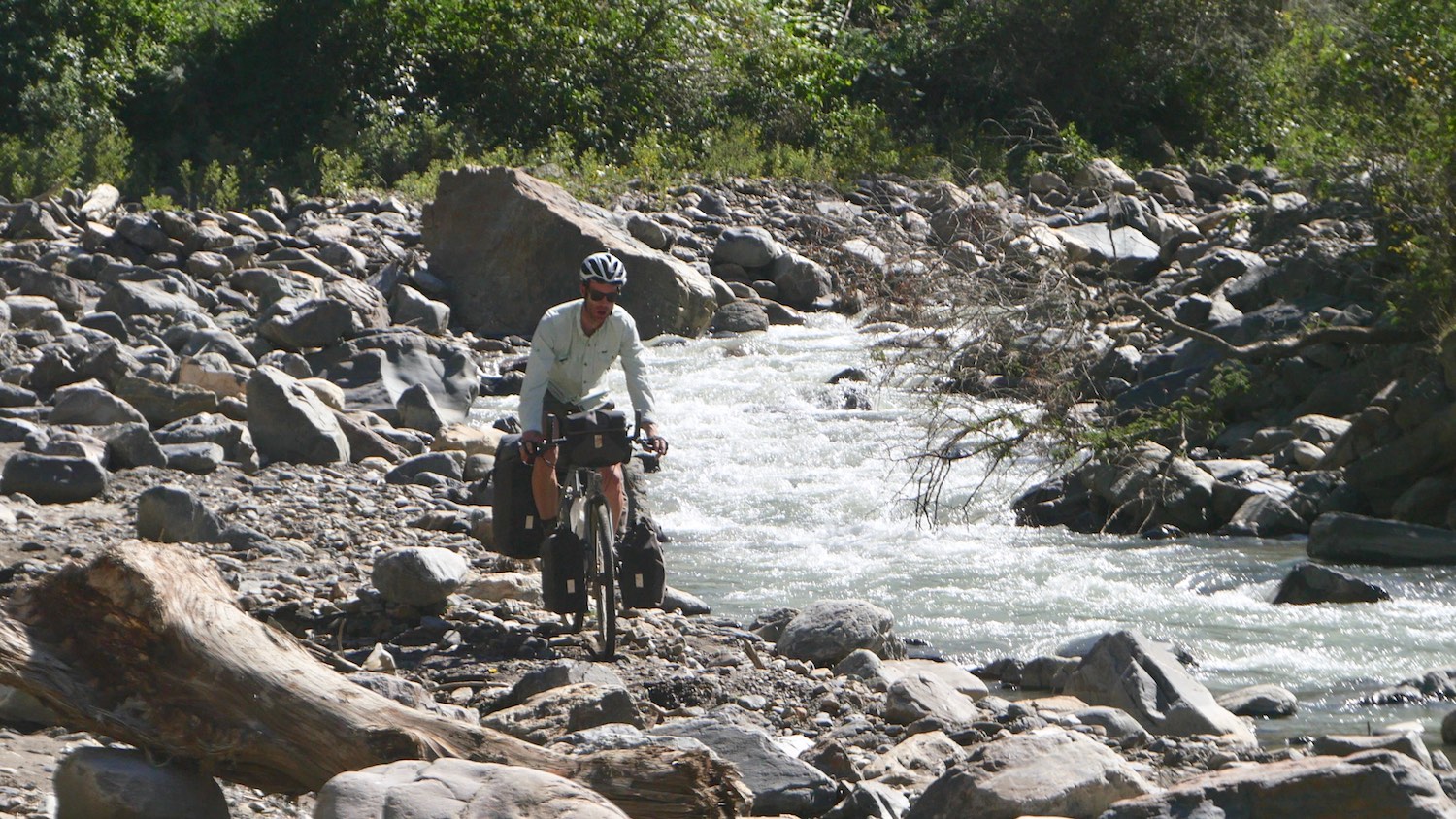 Yes, this is the road on my maps. Smooth as silk! The contributing factor to its wonderful condition: a river that got a little temperamental in the rainy season!! 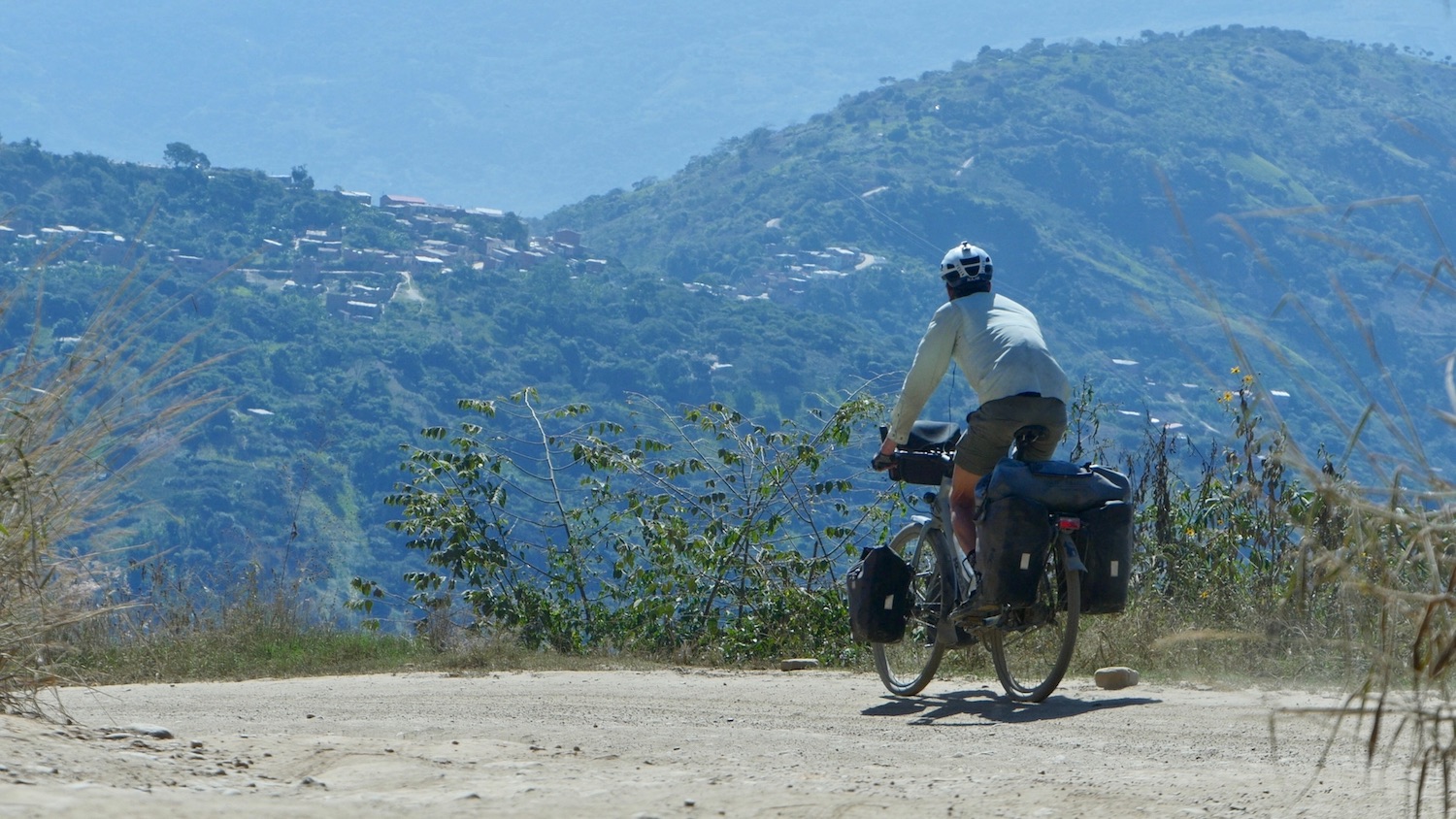 Look! The town is right there! If only I could fly — to get across the valley I had to descend 1000m vertical then ride my way back up the other side. I’m not complaining though… cycling through the Yungas mountains is such a delightful experience. I’m already planning my route for next time I come here!