Dynamo hubs are becoming more and more common on bikes used for bicycle touring and bikepacking. This can be attributed to recent improvements in dynamo hub power outputs and efficiency, LED light advancements and ever-upgrading charging technology.

There are only a handful of dynamo hubs on the market, but there are some significant differences between them. This article will delve into everything you should know about dynamo hubs. 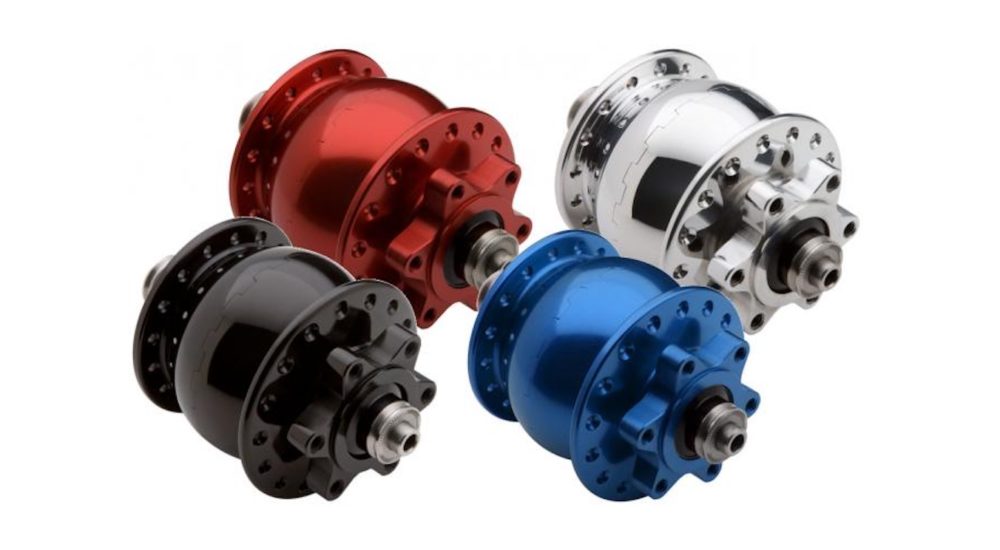 The most common size for a touring bike is still 9mm quick release, but with axle standards changing both on-road and off-road, we’re now finding touring and bikepacking bikes available with six axle variants.

There are two different common forms of spade connector – the Shimano design and the Schmidt SON design. Neither design can be said to be ‘better’ – they both do the same job of transmitting power up the cable. Due to the market split of connector types, dynamo lights and USB chargers tend to come without any connector attached to the cable ends.

A less common connector design is the Schmidt SL fork dropout. This is a really neat design; the connection happens between the edge of the hub and a fork dropout plate that’s soldered to the wiring. Almost every Schmidt hub is made in an SL version. Unfortunately, you’ll rarely find the Schmidt SL dropout on anything but custom-built forks.

There are three different power specifications for dynamo hubs: 1.5-watts, 2.4-watts or 3-watts (all at 6-volts). Given that touring and bikepacking is often conducted at speeds below 25KPH/15MPH, the most powerful option (3W) is necessary for charging USB devices, and it’s the best for low-speed lighting too. That said, 2.4W hubs offer enough power if you’re touring using smaller diameter wheels (16-20″) and 1.5W hubs are appropriate for lighting your way at higher speeds (ie. 25KPH/15MPH).

Dynamo hubs come with anything from 20 spoke holes for a lightweight carbon wheel builds through to 48 holes for the strongest tandem wheel. Most touring and bikepacking bikes use between 28 and 36 spokes. While spoke count makes some difference, evenly balanced spoke tension across the wheel and a stiff touring rim tend to matter most in terms of strength.

At different speeds, dynamo hubs offer varying amounts of power for your lights and USB chargers. The amount of power a dynamo hub delivers will depend mostly on the light or USB charger – but there are also a few tricks dynamo hub manufacturers use to boost their power outputs.

Dynamo hubs paired with powerful USB chargers will provide smartphone levels of charging from about 12KPH (look for 2.5W on the graph). That said, some hub and charger combinations will not deliver 2.5-watts until around 20KPH.

When we compare the power outputs at different speeds for the kLite USB charger (see graph above), you’ll notice the green line of the Shimano UR700 is offering the most power at all speeds, and the red line of the SP PD-8 the least. At 15KPH the UR700 is delivering three times the power output – quite significant considering the hubs both have the same 3W power specification.

That said, if you want high power outputs from your dynamo hub, you have to pay for it with additional drag.

If you’ve ever picked up a dynamo hub and tried to spin the axle, you’ll know that they feel incredibly ‘notchy’. This is the result of a series of powerful magnets passing a coil and in turn, creating an electric charge. With no light or USB charger connected, this drag only has a small effect on your speed because of the flywheel effect of a rotating wheel. According to the graph above, the drag is between 1 and 5-watts depending on the cycling speed and hub model.

When you connect a light or charger to the hub, the drag will increase. The amount of drag is mostly a function of the light or USB charger that you have connected, but there are variations between hubs too. The graph above shows how four different dynamo hubs perform with the brightest dynamo light currently available, the kLite Bikepacker Ultra. As you can see, the drag increases with the output power and speed. At maximum brightness when using the SP PD-8 hub (25KPH), the drag at the hub is around 24.5-watts, which is likely to be somewhere between 12-20% of your total pedal power. That’s a lot.

You can read the full dynamo hub testing analysis HERE.

A more efficient hub will turn more of your pedal power into power for your lights or charger. We can find out how efficient a dynamo hub is by comparing its power output and drag at different speeds.

The rate of efficiency is quite different for different hubs. For example, at 15KPH a Schmidt SON28 hub provides 1.9-watts to your USB device but will take 3.2-watts of your pedal power (see graph above). That means 59% of the SON28 resistance will be going towards charging your device. In comparison, the SP PD-8 will create 0.9-watts but will take 4.6-watts. In this case, only 20% of the PD-8 resistance will go to charging your device.

You can read the full dynamo hub efficiency results HERE.

Schmidt is the industry standard for dynamo hubs in terms of both efficiency and reliability. These German-made hubs are also the most expensive. Despite this, they’ve been my dynamo hubs of choice since 2008. The bearings are not expected to need servicing until well after 50,000km due to a combination between robust weather sealing and the high-quality SKF sealed bearings (I’ve never actually had to replace the bearings in any of my hubs). Included with Schmidt hubs is a five-year guarantee too.

SP dynamo hubs are the lightest dynamo hubs available and are also quite modest in price. The latest generations are known to be very reliable, but unfortunately, they’re not the best performers – they have a lower rate of efficiency and power output compared to other hubs. That said, SP makes some unique hub configurations you won’t find elsewhere, including for road bikes with a low spoke counts (20 and 24-hole). In addition, their 15mm thru-axle hubs are literally half the cost of a Schmidt. SP gives you the choice between brake rotor mounts on many hubs: 6-bolt (eg. PD-8X) or centerlock (eg. PL-8X).

Shimano makes the majority of the world’s dynamo hubs, so it’s safe to say that they know a thing or two about them. Shimano hubs are very reliable, serviceable and usually the cheapest too. On top of that, they’re brilliant performers. The latest model, the UR700, is the most powerful dynamo hub available (highly recommended for off-road or hilly regions), while the rest of the hubs work out to have the second-best charging and lighting efficiency.

The Deore LX and Alfine models are essentially the same, while the Deore XT dynamo hub sheds 56 grams thanks to an aluminium axle and coil. The top-of-the-line dynamo hubs (UR700 and UR705) save a further 30-50 grams.

KT has recently released a dynamo hub range including a hub with a rather innovative end-cap design. By switching out the end-caps, you’ll be able to interchange your dynamo wheel between bikes that employ QR, 12mm or 15mm axles. You can get the hub in either the standard 100mm hub width or to suit 110mm Boost forks, and the disc brake hub models are available with 6-bolt (eg. KD5F) or a centerlock (eg. KC5F) brake rotor mounts. KT hubs employ the same hub shell as the SP Dynamo hubs, although internally they have their own circuitry which is yet to be tested for output power, drag, efficiency or long-term reliability.

Kasai has released a hub called the FS Dynacoil. While most dynamo hubs are sealed at the factory and cannot be repaired yourself, this dynamo is field serviceable. Using a 36mm flat wrench, you have access to both the coil assembly and hub bearings. That means that if your hub stops providing power, you can replace the coil assembly yourself (hopefully under warranty) without having to re-lace a new wheel. In addition, when your sealed bearings inevitably wear out, you can replace them too.

Like the KT hub, we don’t yet have any idea how durable the Kasai is, along with its output power, drag or efficiency data – but Kasai is claiming 72% efficiency at 10mph (likely using a resistor). The hub weighs between 445 and 495 grams depending on the model.

Biologic Joule 3 Disc – Re-branded 32h Shutter Precision PD-8 hubs in silver or black.
Exposure Disc – Another re-branded 32h SP PD-8 hub available in a package with the Exposure Revo dynamo light.
Love Mud Juice Disc – More re-branded 32h SP PD-8 hubs!
Neco Rove Disc – The claims are pretty lofty for this 933g dynamo hub with built-in USB charger – 15W of charging potential (5V@3A). Unfortunately, the testing has shown that you need to be going 50KPH to achieve that figure and that it isn’t at all competitive below 25KPH.
Sanyo H27 Non-Disc – This is one of the best value dynamo hubs going around. Unfortunately, it has a lot of drag compared to other hubs, even with lights or USB chargers switched off.