If you’ve been following our trip with a keen eye or two, you’re probably thinking: what’s next for Alleykat? In this Q&A article, we reflect on how we’ve changed, what we’re thinking about and what’s coming next.

Here are our most common questions since we’ve arrived.

1. What’s it like being back? Are you loving being home?

It was weird at first being back because we didn’t really ‘fit in’ in either of our lives: no longer bike touring Alleykats and not quite cafe-dwelling Melbournians, but we’ve found our feet a bit more now. Obviously we are glad to be back, surrounded by family and friends – such social butterflies! This first month has been almost non-stop catch ups, and we haven’t even made it 50% through the list of people we want to see! 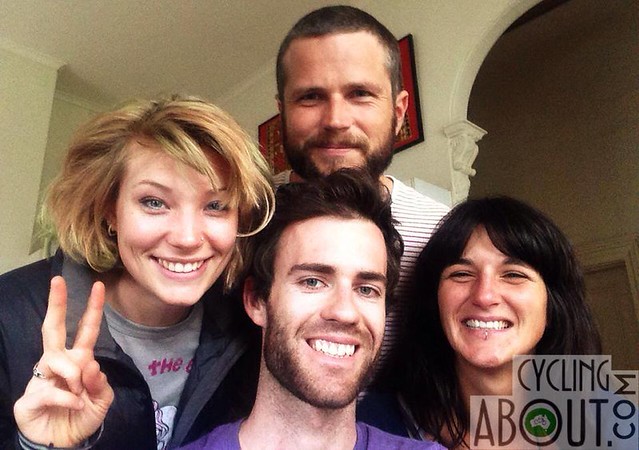 We hosted Will and Selina in Melbourne. They completed the same trip as us over the same timeframe. We met initially in Italy, then re-grouped in Turkey, Iran, Kyrgyzstan and Vietnam!

2. Do you miss and think about travelling?

We carry two years worth of people around with us, it’s odd – there are times where all we can think about is being on our trip, reminiscing and wishing to return to a particular time and place. That said, we are happy to have stopped travelling for the time being and will begin thinking about the next voyage some more when the time is right (and the funds are replenished, and the University course is completed!)

You might be surprised to know that we don’t want to keep travelling right now. Travel has consumed our lives for the last two years, but we’ve been pretty focussed on the goal of reaching home with every pedal stroke. It feels right to be back.

3. What have you done since you got back?

We have seen and supped with people, travelled around visiting family, drunk a metric bucket load of stupendously good coffee each, oh, and seen more people. We’ve really been enjoying our homebody status and proximity to the city. Currently, we’re trying to reflect on what has just happened in our lives, to preserve our current feelings and to learn from the world. In this charmed home life, we are slowly puting into practice the ideas that have popped into our brain-boxes along the way. 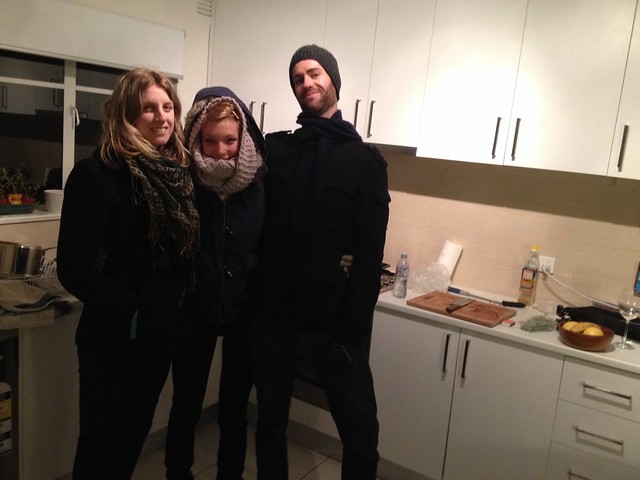 Catching up with friends has taken up most of our time!

4. What are you going to do now you’re back?

Alee has thrown himself into film making, and has bought himself thousands of dollars worth of cameras and equipment (Panasonic GH4!). He is trying hard to reflect and consolidate on lessons learned from our time away, and is hoping to learn a few new computer / design skills. He dabbles in the idea of part-time work and will apply spasmodically for jobs that appeal in the next six months.

Kat has landed a little job at KeepCup and is in the process of becoming a body piercer in the six months before her university course begins. She is rearing to go, to get started on her newfound focus of dietetics, nutrition and public health, but is happy to have some time to be free to write!

5. Where will be the next adventure?

The next adventure has undoubtedly begun – life in Melbourne and its menagerie of people, places and events, is more than enough to keep any thrill-seeking traveller entertained for the time being. However, we do have a sneaky little plan to adventure through the Americas from top to bottom…

Alee is going on a bike trip through SE Australia with a few mates in December and is looking to make a short film of their experience!

6. What was your favourite country?

Iran comes up in this conversation over and over: the people of Iran are so utterly loving, overwhelmingly interested (and interesting!) and relentlessly kind that they are impossible for us to bypass with the label ‘favourite’. The Persian culture is rich, varied and historic; the countryside vast, changeable and glorious; the food is mouthwateringly good – the bread especially! The government subsidises bread, making this freshly-baked commodity affordable for all (close to 20 cents per round).

Hanging out with relentlessly kind Iranians in their home!

7. Is there anywhere you wouldn’t go again?

Our experiences were usually positive, so, when we had a rather less-than positive experience in Georgia it may have been that we were spoilt on the rest of the trip! However, we are not in a rush to return to the country where Kat was sexually assaulted and where the general attitudes seemed abrasive, competitive and un-enjoyable for us.

Our trip encompassed so many people, so many places, so many events and enlightenments and eye-openers; it would be impossible to frame every lesson learnt, we’d run out of space on our walls! We did learn that in general, people are good – people are kind and open and willing to share what they have. We learnt that sharing what you have makes you richer, not poorer. We learnt that bicycles and self-propelled methods of transport are an open invitation to people to be interested in you, to talk to you and indeed to invite you into their homes and lives. We learnt that most people hold funny opinions about those living in the country that borders them and too, that these are always unfounded. We learnt languages – how to ask ‘could we please put our tent in your garden?’ in many, many different tongues. We learnt that if you are willing to go the distance, people will invariably meet you half way there or more! 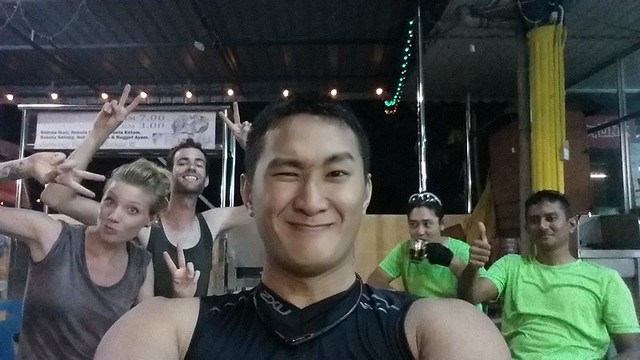 9. How have you changed?

We have changed physically a little – we’ve both lost a few kilos, Al has lost “unnecessary” muscle and Kat has gained a few necessary ones. We’re pretty hardy, we can go for days without showering and be pretty ok with it. We can ride for six hours with no qualms, no second thoughts – that’s just a regular day on the bike. We have calloused hands (but soft palms), we have more freckles, more tanlines and different hair.

Mentally we have changed quite a bit – less judgemental about some of the fundamentals (religion, politics, family) because even though a person might support a different football team from us (or worship a God, or vote conservatively) in most cases that doesn’t detract from the goodness of that person, nor their abilities or actions to do good things: it’s often the most religious (and occasionally conservative) who open their homes and hearts the widest. We weren’t conscious of being hugely judgmental in our ‘old lives’, but have consciously made the choice not to be now. We are tough, we are pretty quick and we are dynamic: the road requires this. We are more loving to each other and hopefully to the people and animals of Mother Earth. 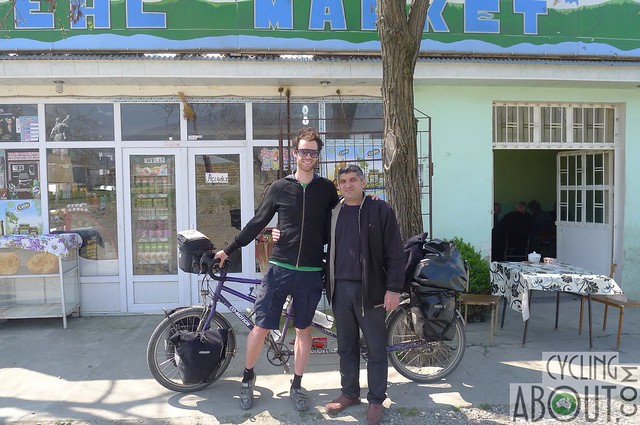 We now have friends in every country we’ve been!

10. Do I look older after two years of not seeing me?

It’s funny to be asked this because yes, you do look older if you are now three and we met you at one; you do look a little older if you’ve spent time out adventuring in the sun or inside stressing about life. But, mostly you don’t look older, but just different – your hair or glasses or shoes; but commonly, comfortingly, people look the same, sound the same, act the same.

We both look and feel different, aged by the world (weathered by the weather, quite literally, but too, weathered by the ebb and flow of humanity too). Our bodies perhaps look older, skinnier and muscular in a different way, but they’re not too different, or too aged. What do you think?

12. How have people at home changed?

There’s a funny thing about change: people want to think they can change for the better, actively change themselves and be changed – but then claim to know that ‘people don’t change’. People have changed in their vocations, their family and their individual styles but fundamentally, most have not changed.

It is weird and jarring when someone does actually changes profoundly; it throws you, and there are a few of these, but the short answer is that people haven’t, and that’s not a bad thing. 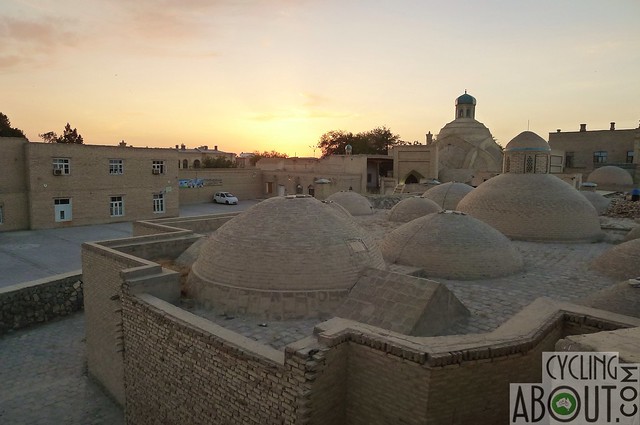 Sunset over Bukhara, Uzbekistan, one of our favourite cities in the world.

13. What was the hardest situation you were up against?

The most difficult times were undoubtedly when we thought the best of someone and those assumptions were quashed, blown to smithereens. We like to be able to trust people and to feel at ease in that trust; when it is ingloriously stolen by disingenuous people, those who seek to actively swindle us or do us harm – that is difficult to come to terms with.

We did have some times where we were a little afraid of what would happen next and whether our selves and our home (TanNayNay) would be safe or not. In the short term, these experiences did dampen our ‘great time’ and perhaps an entire country’s worth of people, it also caused a little friction between us as a couple. But in the long run we ultimately didn’t let these things affect us too greatly. We like to still trust people and think the best of everyone we meet. Bad people are one in a million, and when we’re meeting so many good people, it’s alright to expect a few rotten eggs!

The relationship didn’t suffer, if that’s what you mean; we’ve definitely grown as individuals and as a couple, along the same trajectory. We did have a serious advantage in our travels: due to the slow-and-steady nature of bike travel, we spent huge amounts of time with other people. There would’ve been about a 70/30 split. We actually spent the bulk of our time with people we met along the way – through Couch Surfing, Warm Showers, friends of friends, family and of course, strangers. Given that we are both hugely social creatures, we benefitted from this frequent socialising. We’d also say that socialising allowed us to truly value our time spent as a couple.

That’s not to say we didn’t fight: we fought long and hard four or five times; healthy arguments and heated discussions which needed to happen because we simply weren’t being honest with each other. Sometimes we did of course, bicker our way through some boring or frustrating days, but that is never personal. We’ve learned what buttons we can press, and thus have learned how and when (mostly) to avoid pressing them!

Do you have any other burning questions for us?