Bicycle head badges were originally used to distinguish similar looking bikes from one another. But in such a competitive industry, they quickly became an elaborate artform adorning all bikes; a good reason to buy one bike over another. A century on and the high-quality badges of the past are a rarity. This is the story of the rise and fall of the ornamental head badge. 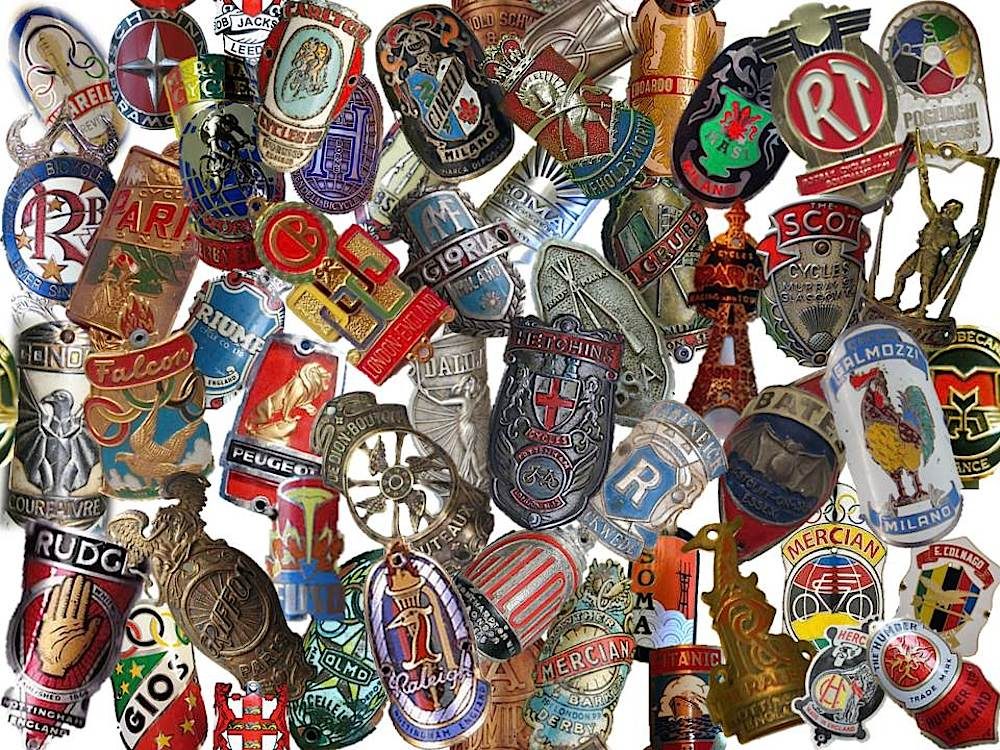 At the turn of the twentieth century, the humble bicycle had truly taken off. Thousands of new bike brands were cashing-in on the success of this efficient human-powered form of transport. Construction and paint technologies were rather simple at the time, and combined with the huge influx of unknown bike manufacturers – you can imagine how hard it was to differentiate between bikes.

That’s where the head badge came in. 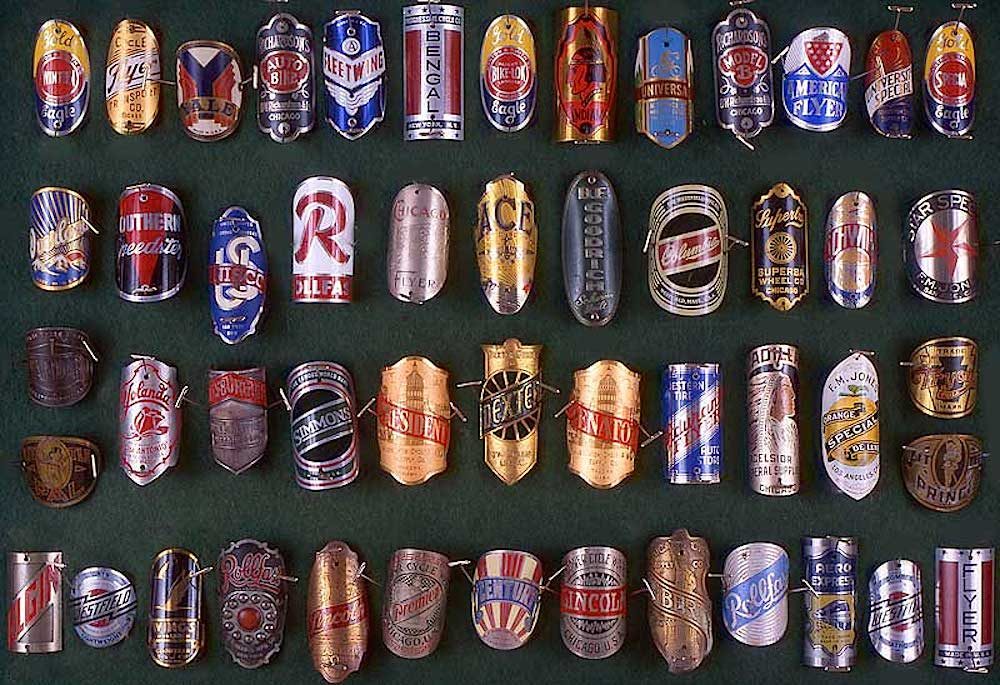 At the turn of the 20th century, head badges were simply used to distinguish one brand from another. The push for head badges on bikes was made by both Schwinn and Pope Manufacturing, two conglomerate companies who needed a point of difference between the 1000+ smaller businesses they’d acquired. Within years, every company under these two brands had a head badge proudly sitting up front, setting a standard for the entire industry. 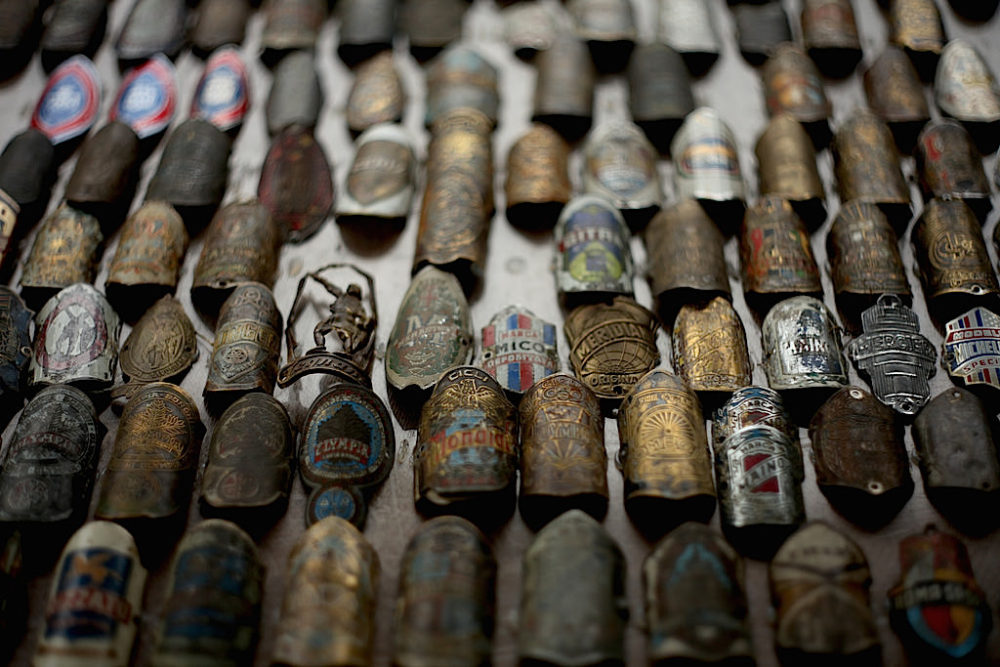 With brands competing to produce the most interesting, elaborate, fanciful creations possible – head badges weren’t just a way of distinguishing between brands anymore, they were the centrepiece of the entire bike and brand. They were the bicycle equivalent of the Rolls Royce car bonnet ornament!

In the beginning, badges were often acid etched. This process required a copper, zinc or steel plate (among other metals) to be covered with wax that is resistant to acid. Artists then use etching needles to scratch the design right down into the bare metal. The plate was then dipped into a bath of acid, dissolving all of the exposed line sections. The wax was cleaned off the plate and it was inked over. Only the ink in the etched lines remained after the plate was wiped down. 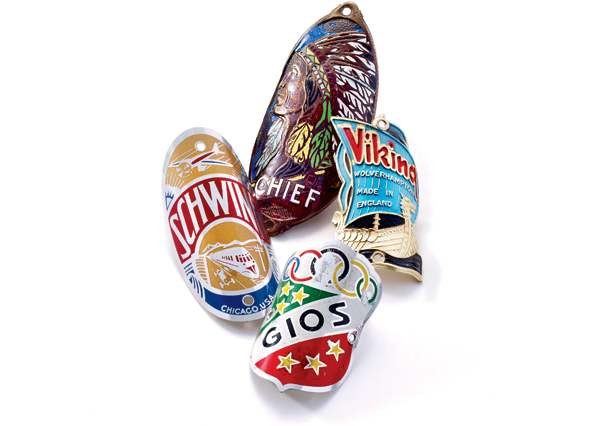 In the early days, popular head badge themes included birds in flight, war scenes, planes, imagery of gods and depictions of power. During the 1920s through to the 1950s the art-deco movement inspired skyscrapers and other machine-age symbols to be styled onto the front of bikes. World Champion stripes and Olympic rings featured on many badges with a racing pedigree. And finally, by the 1960s it became less about small intricacies and more about big logos and the brand symbols we see today.

Unfortunately, in this highly price-competitive industry, the heyday of the headbadge stopped by the 1970s. These days you’ll find less and less carefully sculpted bike jewelry – frames are instead adorned with basic metal stickers or simply a lick of paint with a logo. 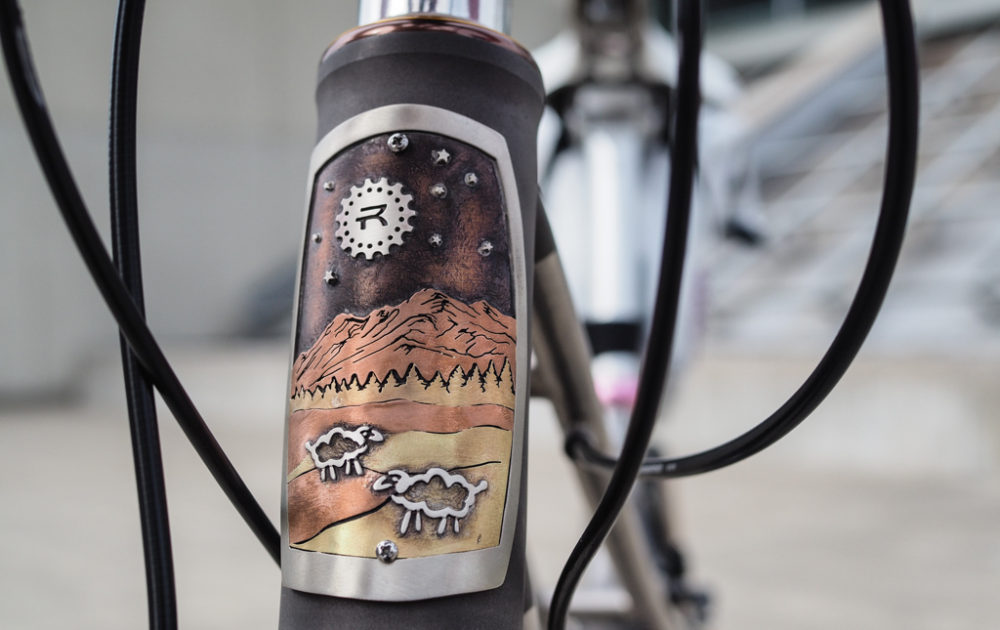 This head badge for Black Sheep Cycles is an absolute work of art. Image: CyclingTips.com

While the bicycle head badge isn’t completely gone from the market, some manufacturers (mostly custom builders and niche brands) still use high-quality headbadges to symbolise the history, story and the meticulousness of their brand. Their beautifully sculpted head badges remind us that frame building is still an art.

With so many bikes coming out of the same factories in Asia, I’m sure that you’ll agree that bikes are starting to look pretty generic again. Sure a head badge doesn’t make the bike, but they are the cherry on the top. So let’s reward brands that care about small details. Tell them their head badges, dropouts and tubing shapes look rad. Tell them you love the small details that differentiate their brand from others. We don’t want the marketing, we want the point of difference.

Let’s bring back the head badge! 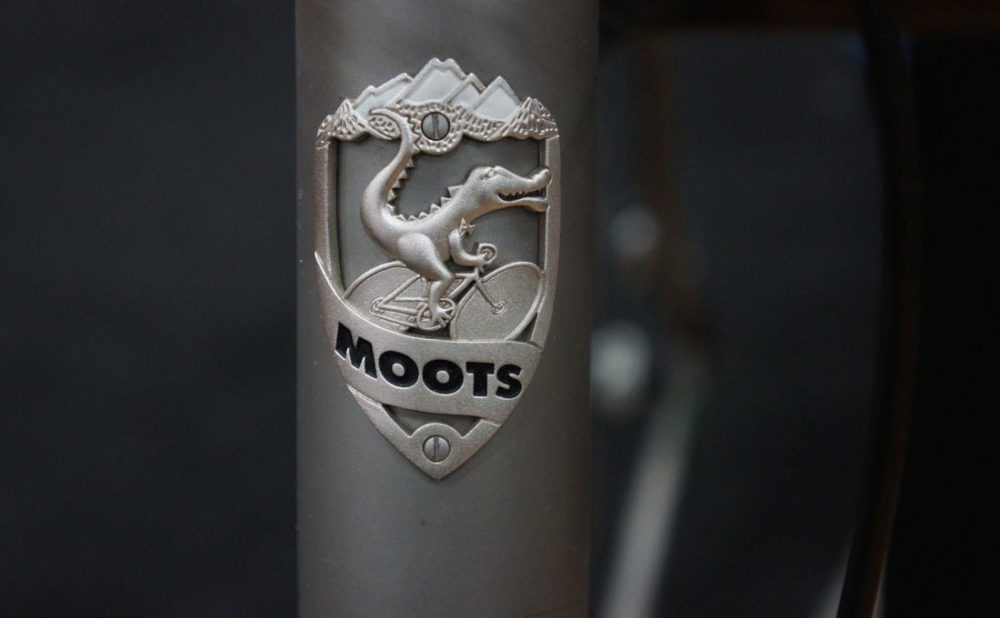 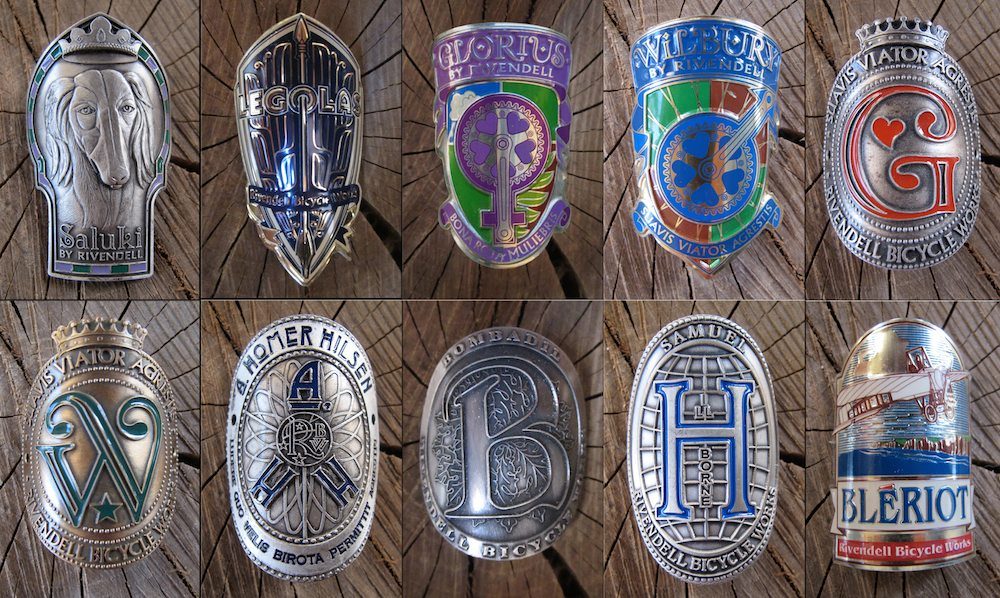 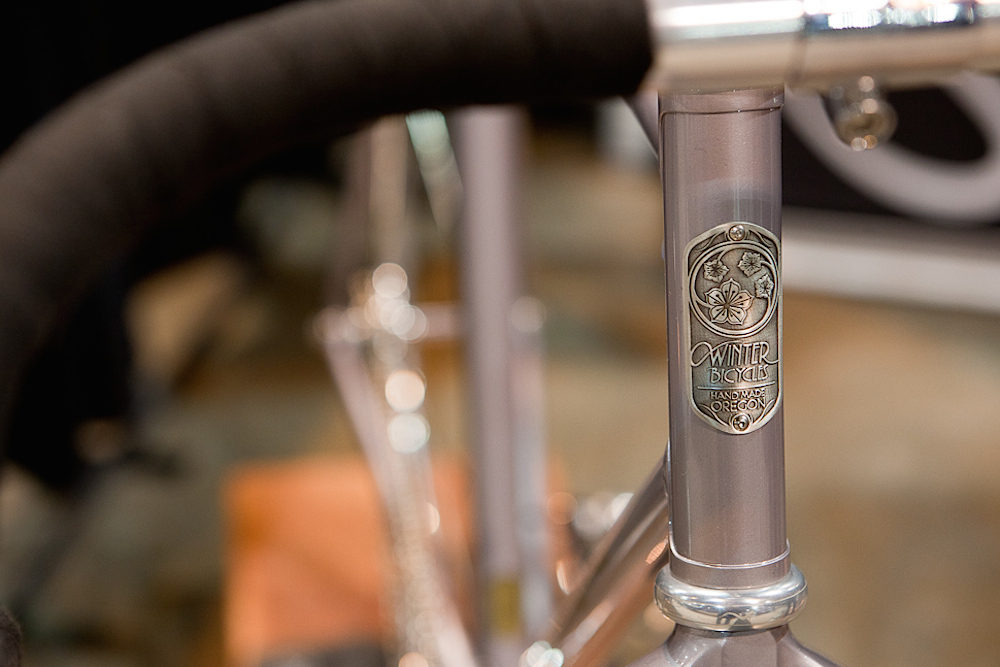 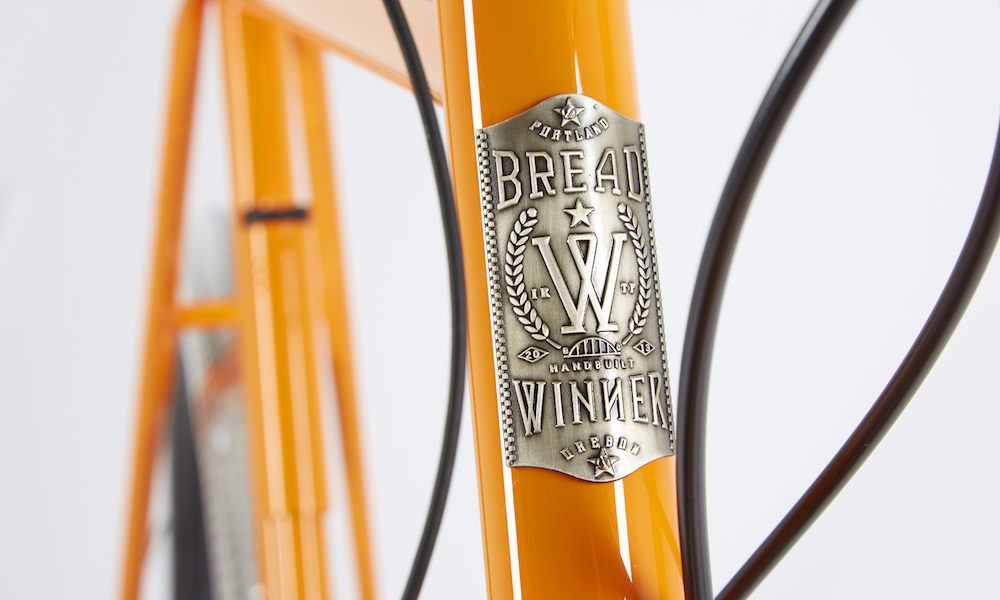 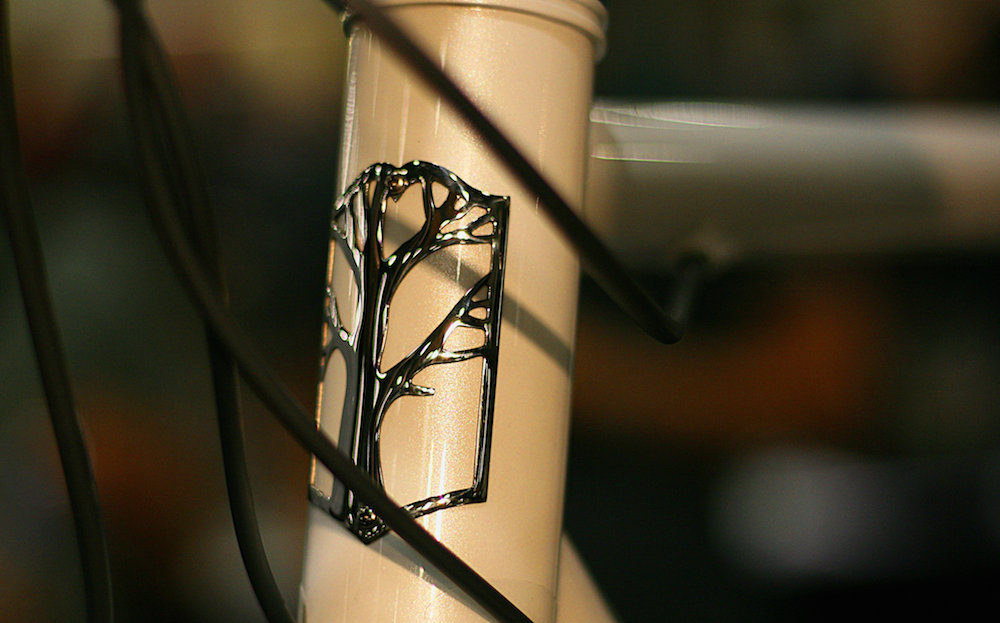 Mosaic Cycles use a simple tree bolted onto the front of their head tube. 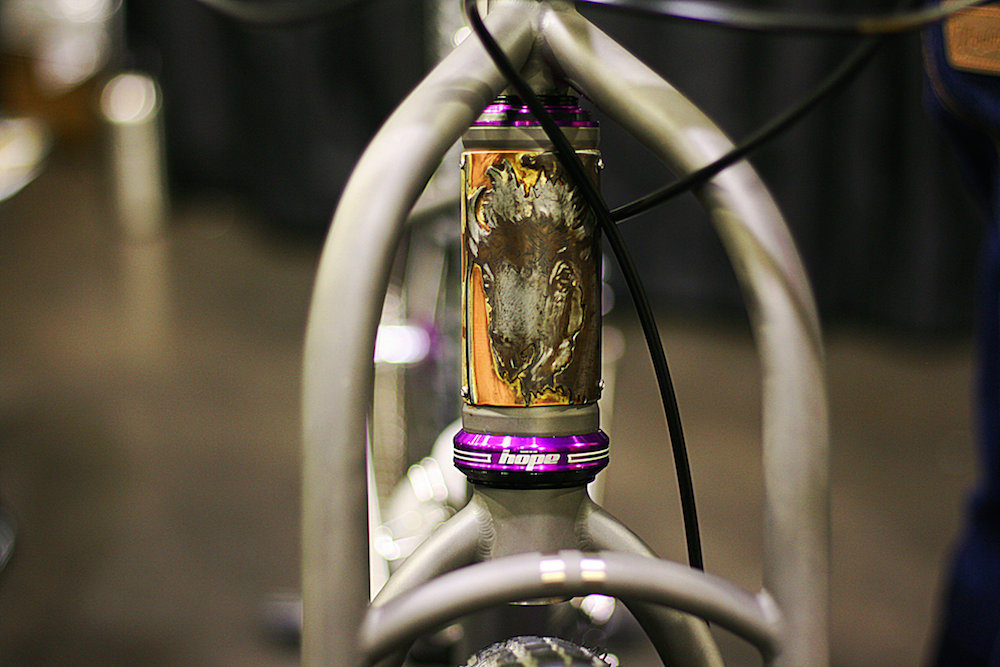 A buffalo headbadge on the front of a Black Sheep bicycle. 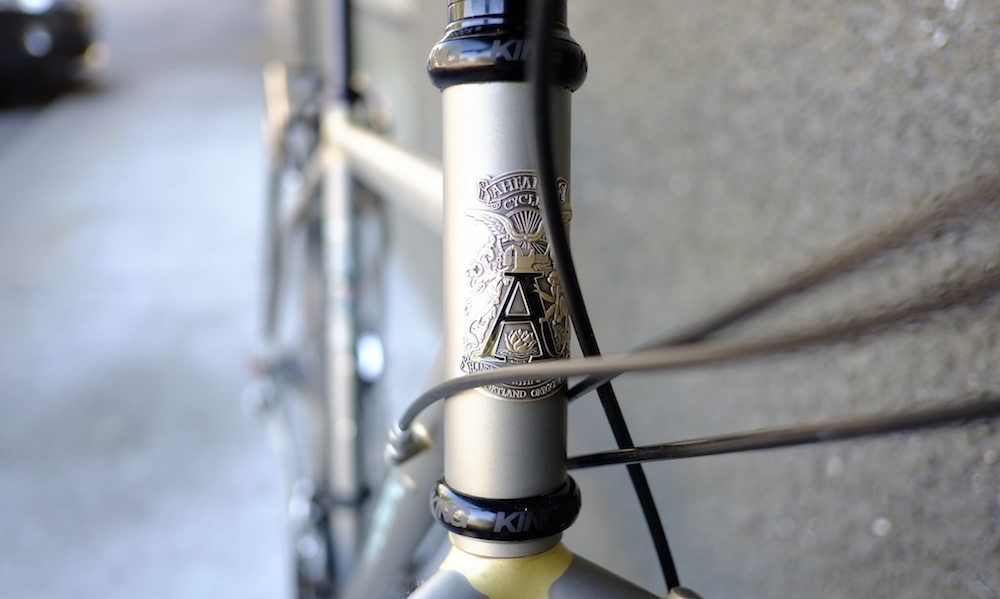 The Ahearne head badge is exquisite.

If your bike doesn’t come with a head badge, or you don’t like your current one – why not personalise your bike with something custom? You can choose between semi-custom designs that require minor alteration, or go all-out with something that is truly unique. Anything is possible! My pick of the bunch has to be the work by Jen Green @ Revolution Cycle Jewelry. 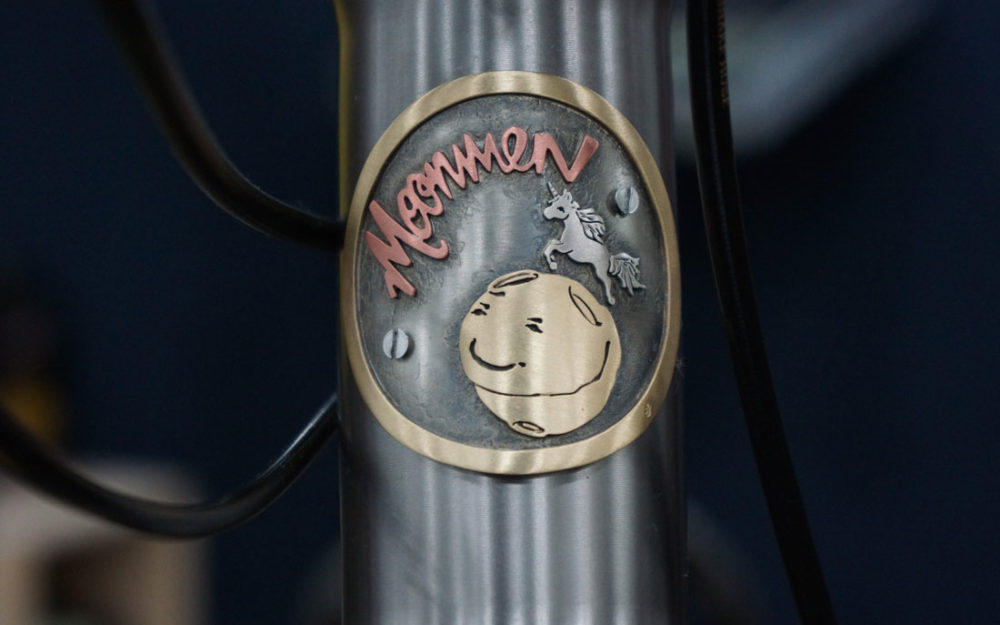 In most cases, 3M double-sided tape is used to install a custom headbadge. They’re easy to remove when the time comes to move the badge to another frame – you can get a razor blade between the adhesive and badge to cut it off. To go to the next level of detail, get a badge that has bolt mounting holes. You’ll need to drill two holes in your bike’s head tube, tap the holes and install the small bolts with loctite. But they look amazing. Custom head badge manufacturers normally keep stock of both the bolts and taps.

Some custom manufacturers will even go the extra yard to braze head badges to their frames! 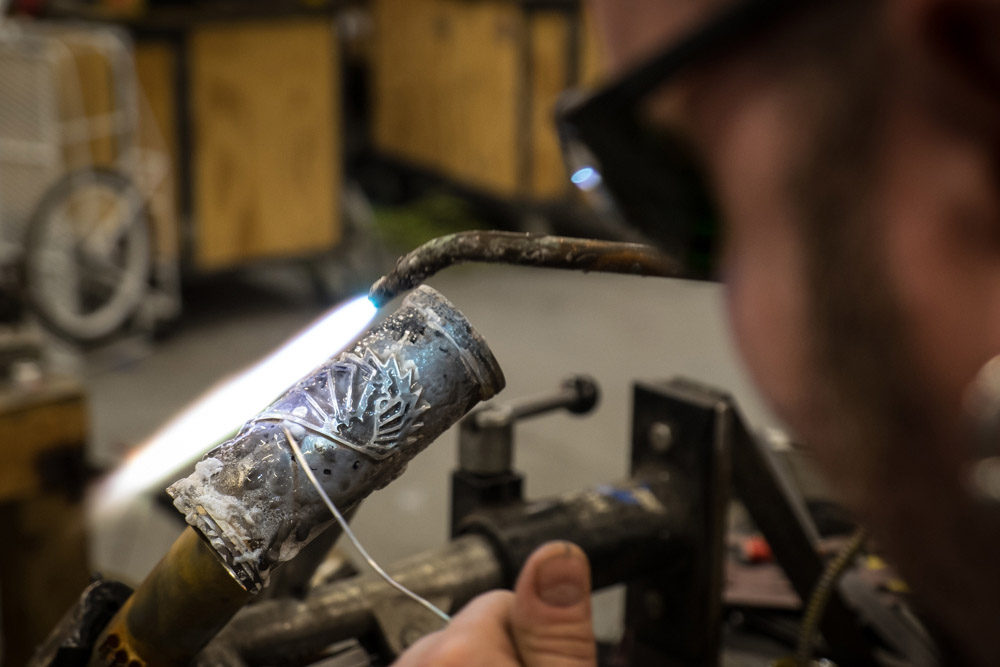 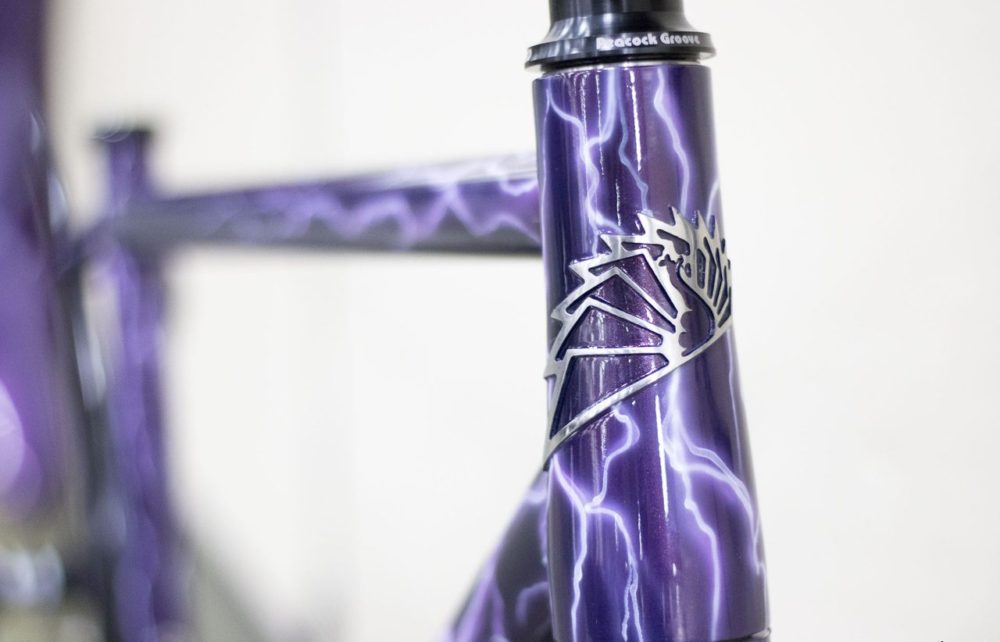 What Are Your Thoughts On Head Badges? Have You Got A Favourite To Share?

How Would I Custom Build A Round-The-World Touring Bike in 2019?