Mark Beaumont’s 240 Mile/Day Bike: Around The World In 80 Days

Yesterday I was given the opportunity to ride with Mark Beaumont through Melbourne and into the rural areas of Victoria as part of his latest challenge: Around The World In 80 Days. 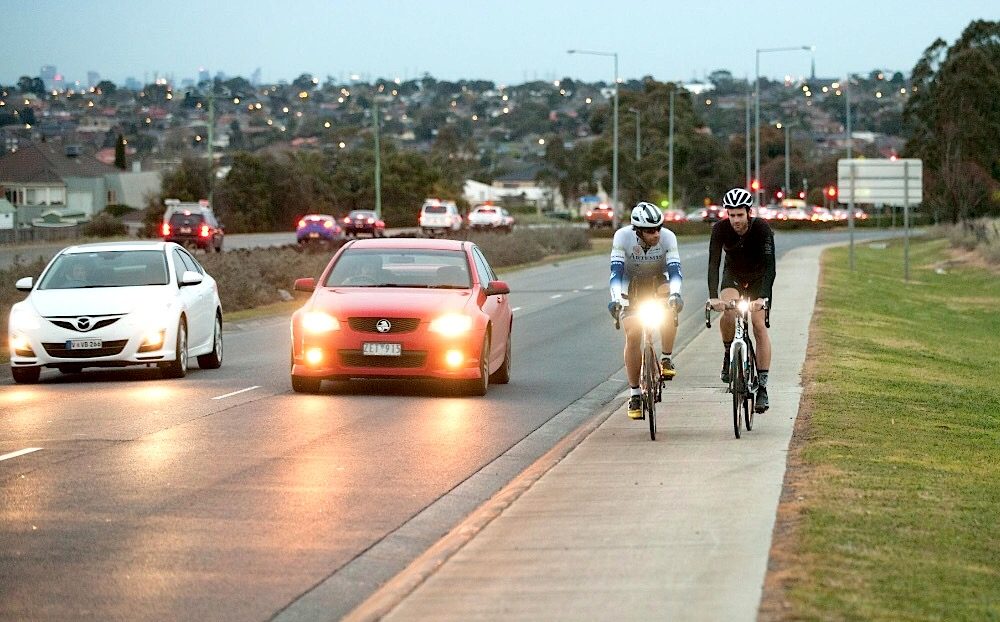 I’ve been following Mark’s adventures over the last decade, starting with his original cycling around the world record. Mark rode across Europe, the Middle East, India, Australasia and North America in 194 days on a regular touring bike with four panniers, all unsupported. This record was particularly appealing to me because it came at a time when I was just getting into bike touring – the ideas of crossing continents with 30kg of equipment in tow helped me envisage what I could one day do with my bike…

My interaction with Mark was very pleasant despite him having a complete doozy of a day. Just hours earlier one of his support vehicles was struck by another vehicle from behind while Mark was only five metres away. The campervan ended up being completely destroyed, and fortunately, nobody was injured.

The Melbourne drivers were showing their absolute worst form (as usual) by yelling out their windows, honking at us and passing with just centimetres to spare. I am truly embarrassed to be Australian when I see how poorly we treat cyclists; there is honestly nowhere on Earth that you will be treated worse. Other than the potentially fatal hunks of metal flying past, the winds had picked up and were rushing at our faces at more than 30km/h. Despite these setbacks, Mark remained calm for the most part. 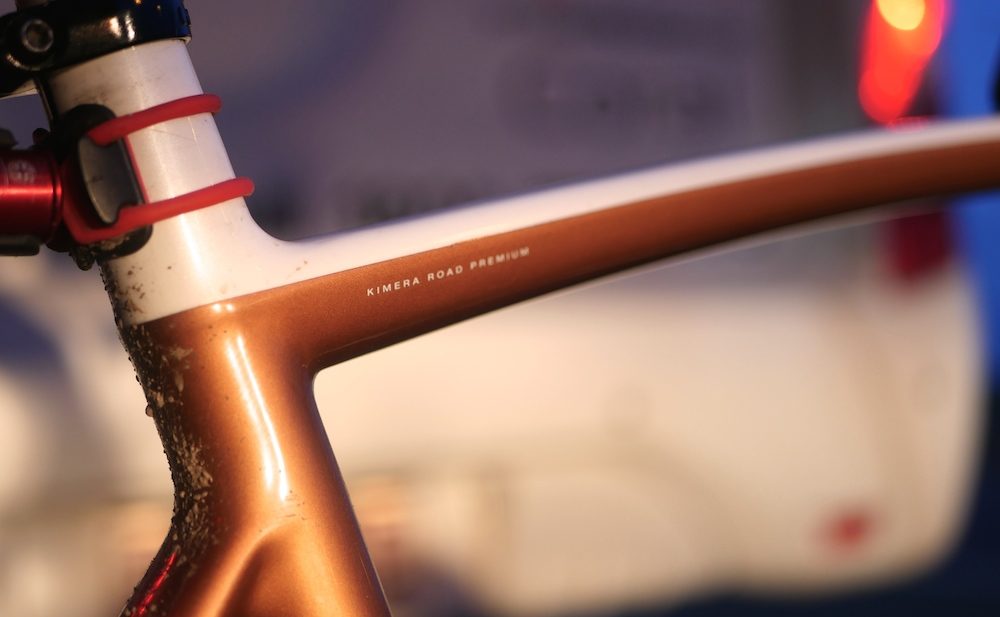 Mark has a long-standing relationship with Dutch bike brand Koga. His original cycling around the world record (and Alaska-to-Argentina ride) was on a Koga WorldTraveller touring bike equipped with Rohloff 14-speed hubs. This time he’s on a carbon Koga Kimera Premium road bike to optimise his cycling speeds. 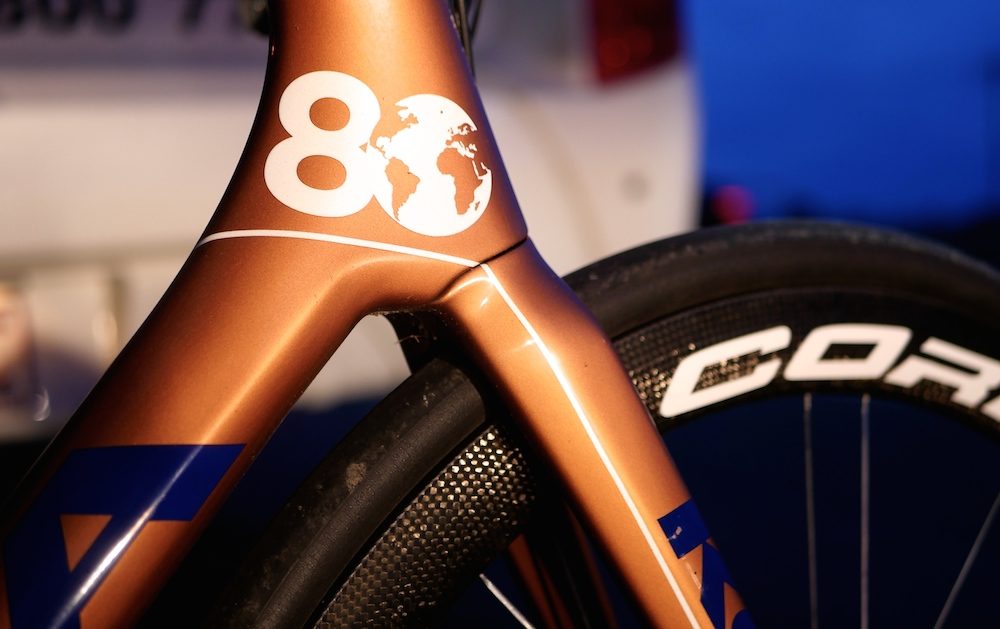 Made in the Netherlands, the Koga Kimera is custom-painted bronze, blue and white to match the logo of Mark’s title sponsor, UK fund management firm Artemis. A large number 80 sits at the headtube as a reminder that Mark’s goal is to take a full 43 days off the current round the world record. At the seatstay area of the Kimera is a small Scottish flag revealing Mark’s identity. 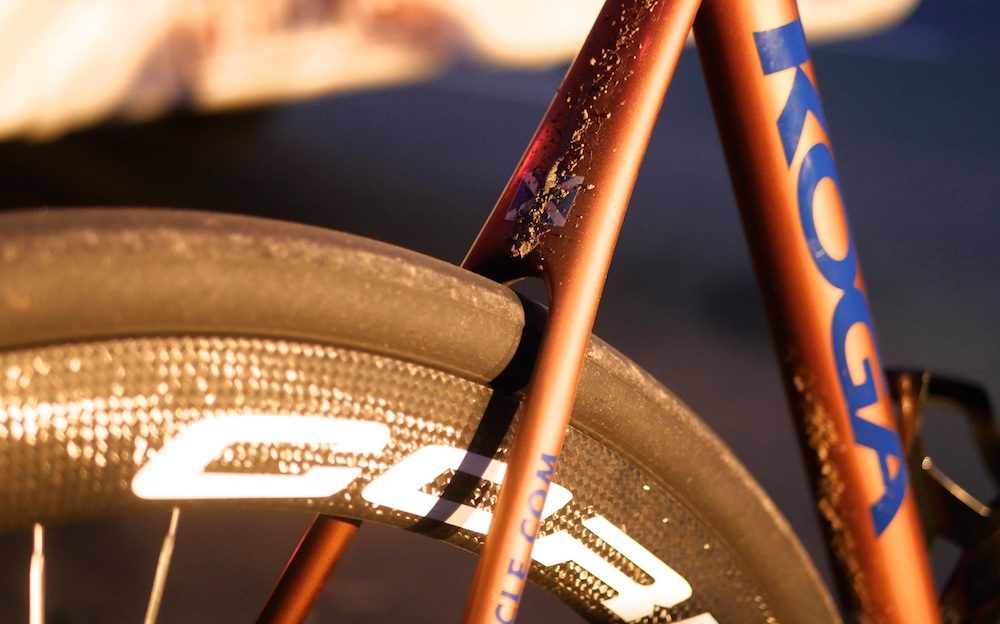 The bike, which is actually one-of-two here in Australia, uses Shimano Ultegra Di2 electronic gearing. This is a popular choice for endurance athletes because it involves very little hand movement to flick between the gears. A set of 47mm deep Corima carbon wheels were on the bike at the time, but Mark also switches to some 32mm deep wheels in crosswinds. 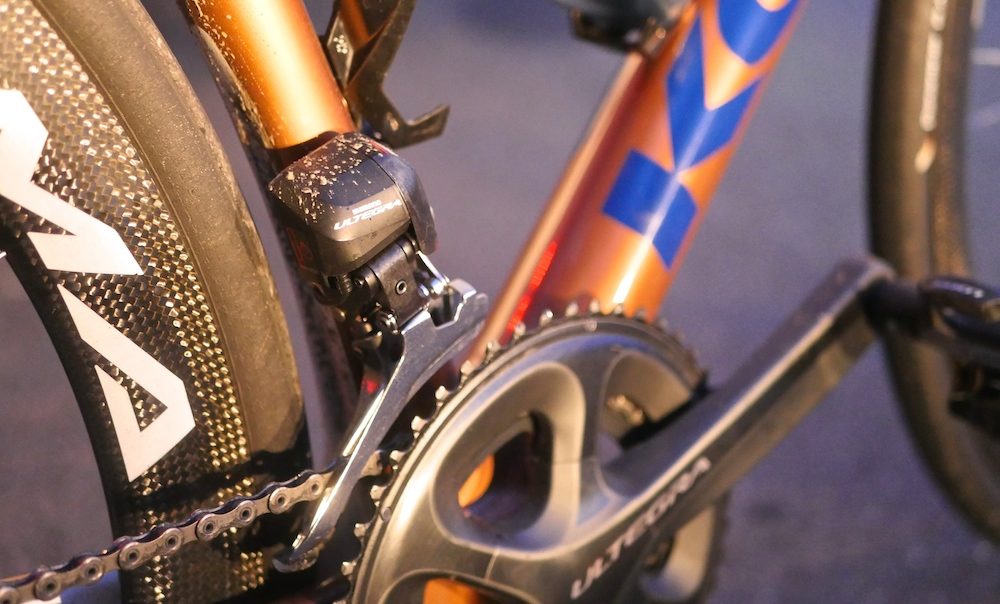 The bike pulls up using Shimano hydraulic disc brakes. These brakes slow the bike at the same rate, whether it’s wet or dry. While not a necessity for the round the world record, these brakes may prove necessary when Mark is particularly fatigued. 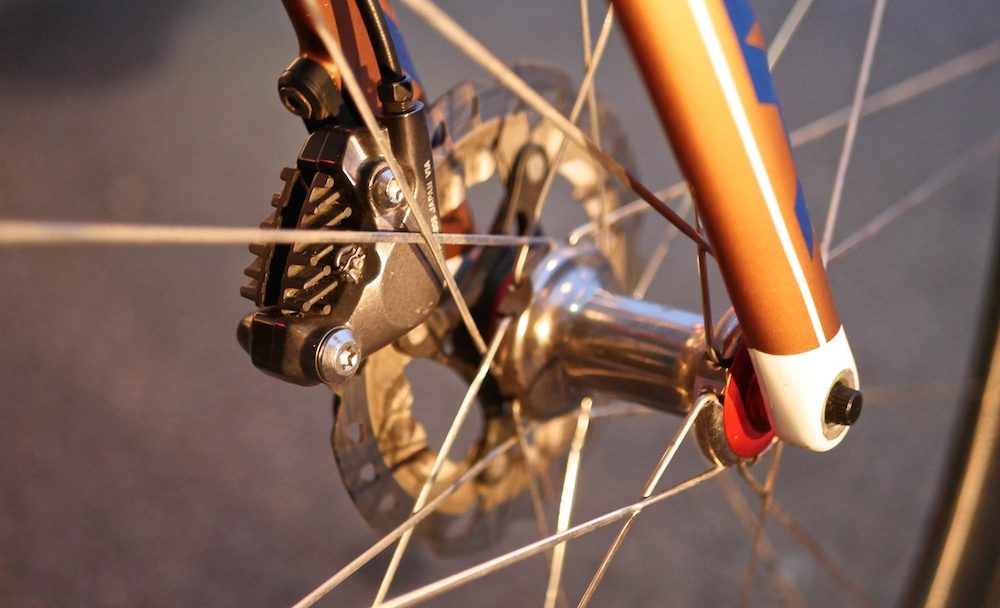 Mark uses a Selle SMP Pro saddle. This is the same model he’s used since first getting into endurance cycling. Mark assured me he was still comfortable in his saddle 39 days into his ride. While many SMP saddles have one distinct ‘upright’ cycling position, Mark said he can ride further forward on the nose of the Pro too. 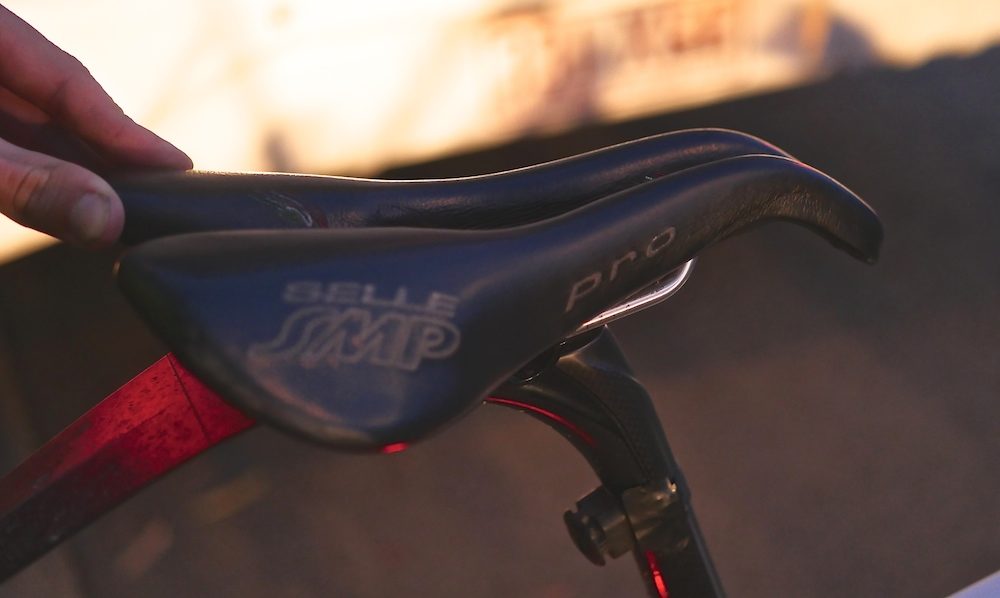 As Mark is cycling for hours per day in the dark, he uses an Exposure Strada 1200 lumen front light which has a road-specific beam that runs at maximum power for three hours. The rear light is an Exposure TraceR which can be seen flashing a kilometre away. 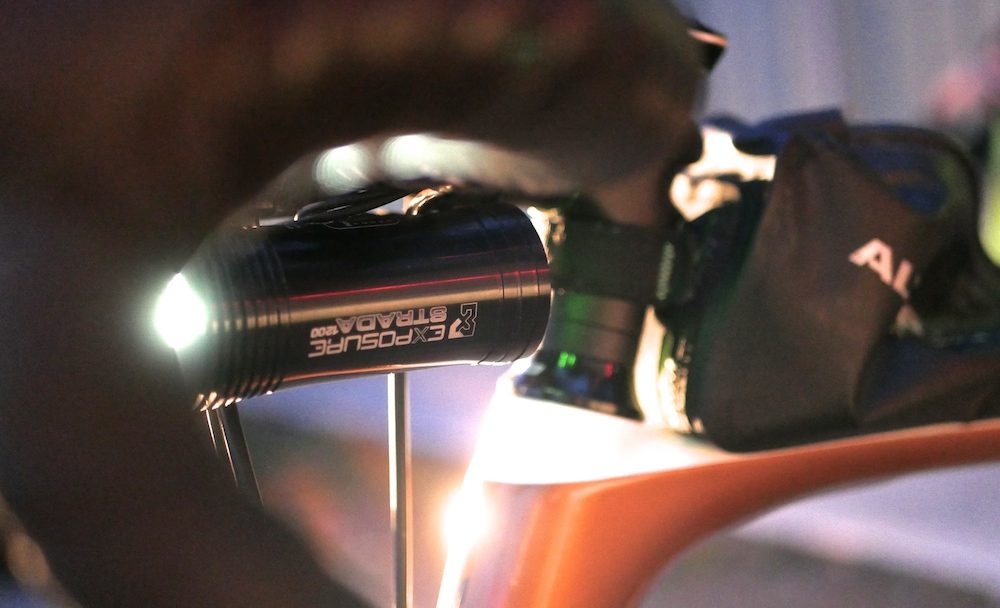 The cockpit is relatively simple, just a set of Profile Design T1+ carbon aero bars, and a Garmin Edge 1000 GPS computer mounted to the stem. Mark didn’t have any road maps on his computer as his support team are assisting with all the turns. He had a top tube bag strapped behind the stem which stored a few essentials like his iPhone. 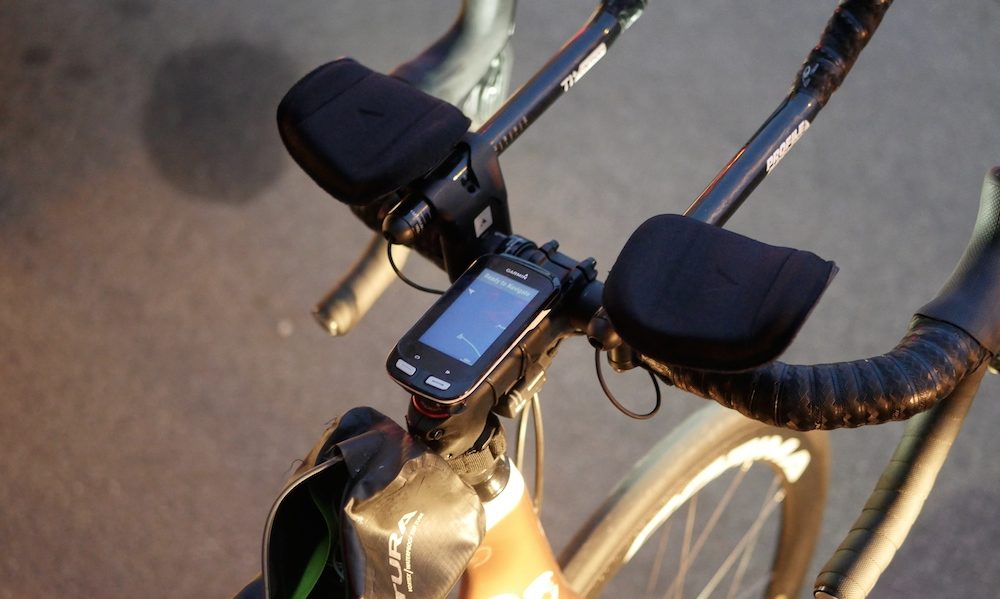 There are two reasons why Mark’s bike has aero bars: to reduce the frontal area of his body (free speed) and to give his wrists, shoulders and back a break from the usual position in the brake hoods. You might be surprised to find the aero bars sit up quite high compared to a time-trialist at the Tour de France, but remember this is a bike that travels at 25km/h (15mph) for 16 hours at a time – Mark’s position cannot be at all extreme. 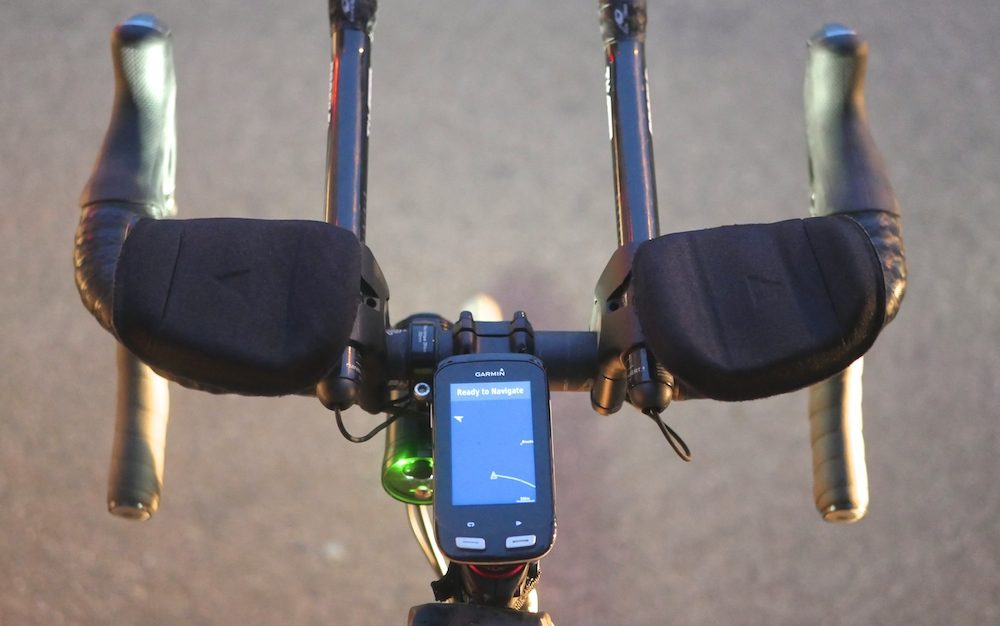 Another advantage of the electronic groupset is that Mark can have gear shifters at the end of the aero bars. This allows him to continually optimise his gear without wasting energy moving around on the bike. 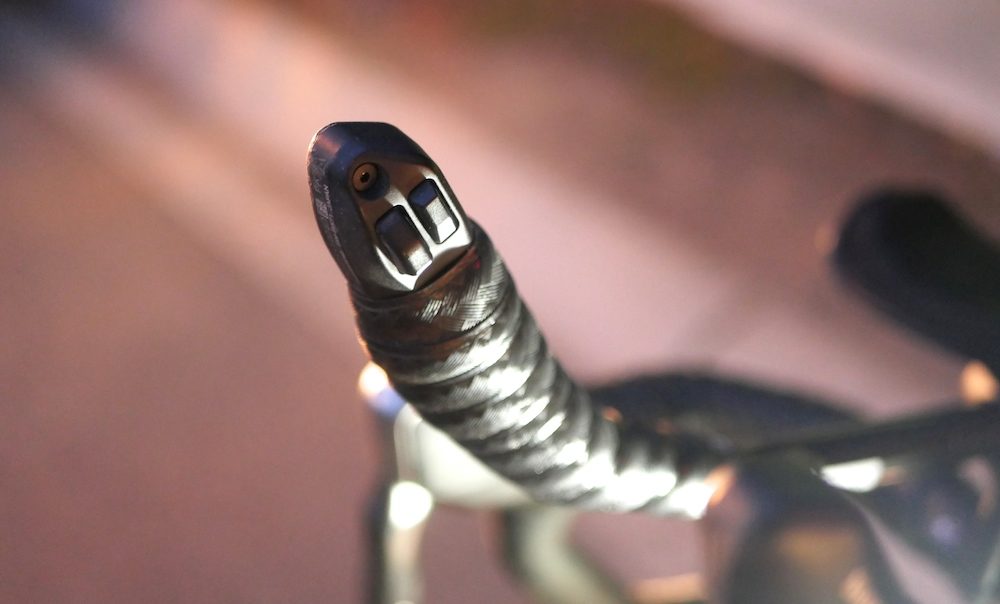 Unfortunately, my side profile shot of Mark’s bike didn’t work out too well, but this is what the complete bike looked like 39 days ago in the studio. Notice the bunch of spacers under the stem and the wide 28mm tyres used to smooth out the roads.

Wishing you all the best for the second half of your ride, Mark! 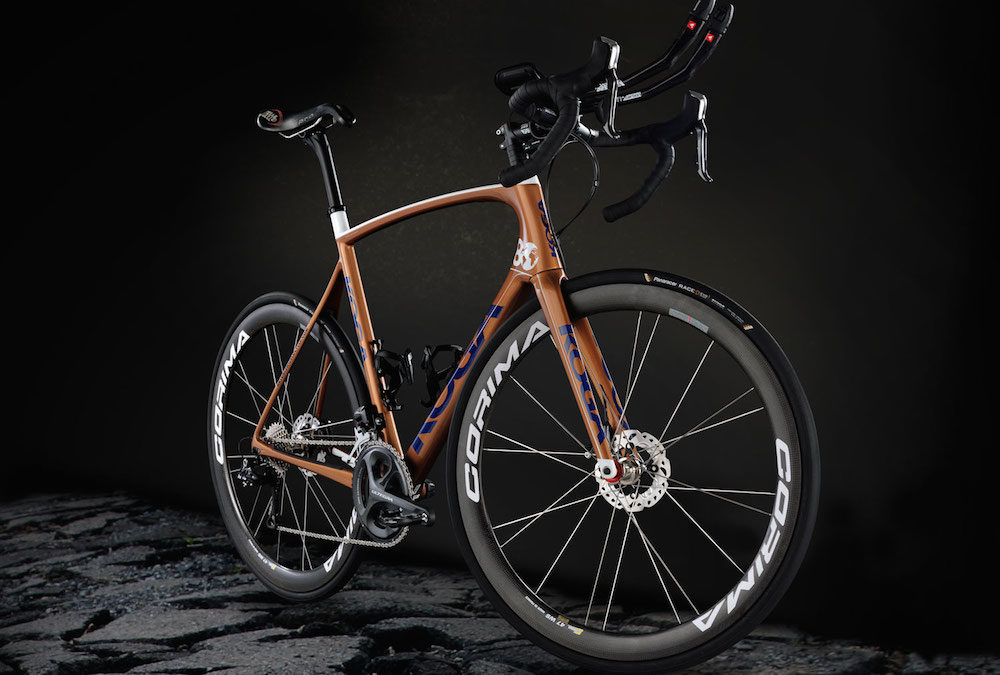