In the last few months, I have written articles about fancy touring bikes, belt drive components, gearbox systems and all the incredible features you can find on custom bikes – including steering locks, guided cable routing and SL dynamo wiring.

During this period, Tout Terrain released a bike called the Silkroad which incorporates many things I’ve recently discussed, plus some never seen before features that will give us a good indication for where touring bike design is going in the future.

I contacted this German bike company because I liked their forward-thinking, I wanted to find out more information than was publically available and I wanted to share with you all the design considerations that go into a top-tier bike – because if you didn’t know bikes, the Silkroad kind of just looks like any bike.

Note: The above video was made in collaboration with Tout Terrain and it included a fee to compensate my time. This is not an endorsement or review, just a deep dive into the bike’s features. 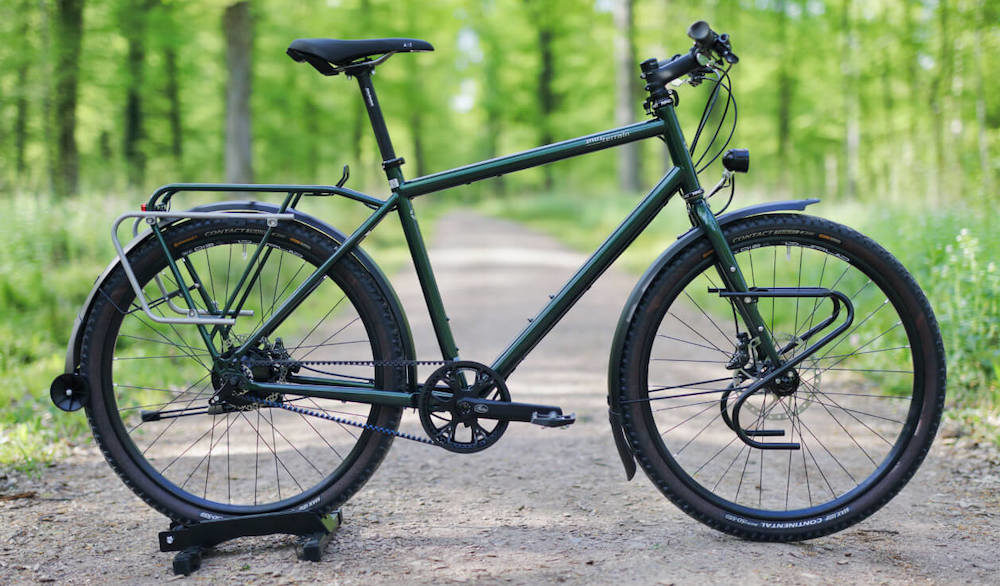 Let’s start with the frameset.

Tout Terrain has specialised in steel bikes for about 15 years. The biggest advantage of a steel touring bike in my mind is that you can easily repair and modify the frames. Let’s say you drop your bike and a rock damages the top tube – that individual steel tube can be replaced by an experienced frame builder.

The steel tubes of this frame are manufactured from raw materials in Taiwan, and it’s welded together there as well. This is actually quite unusual as raw materials, tube processing, manufacturing and painting often end up happening all over the world, resulting in a higher carbon footprint for a bike.

The Silkroad frames are some of the first to pass the highest safety testing a bike can undergo, which is for a combined rider, bike and luggage weight of 180kg/400lb.

It helps that the Silkroad uses oversized, thick-wall tubing to build a strong structure that can resist the twisting forces between the front and rear luggage. I can only think of a handful of brands with the equivalent tubing spec. While steel normally has a different ride feel to say aluminium, when it comes to super-stiff touring bikes with a bunch of luggage attached, it’s actually hard to discern between materials.

There is heaps of storage space on the frame for water bottles, folding locks or two-bolt cargo cage bags. 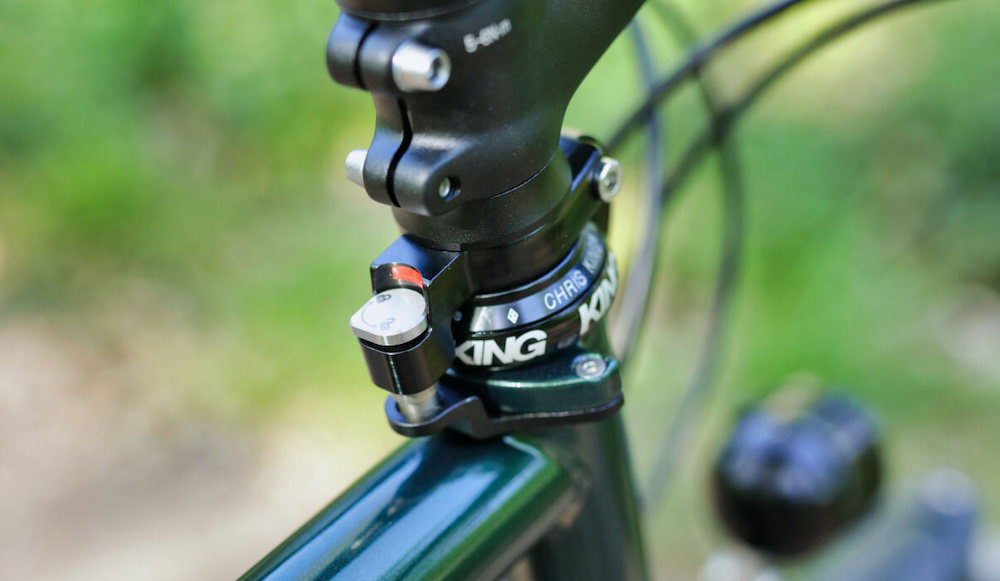 One of the nicest features on the Silkroad is the steering limiter – to prevent your cables from getting crushed – and the integrated steering lock.

If your bike ever falls over when it’s parked, it’s usually because the has front wheel has moved. With the push of a button, the steering can be locked in place on the Silkroad, making bike parking, mounting your panniers and general bike maintenance a bit easier.

A steering lock is particularly important if you use a double-legged kickstand, as any front-wheel movement can easily tip the balance of the bike. That said, after experimenting with many kickstand types over the years, I think a rear-mounted model is the most stable across all surfaces.

It’s cool that this bike has the mounts for both kickstand options, and I really like the small brace from the kickstand to the rear brake mount. 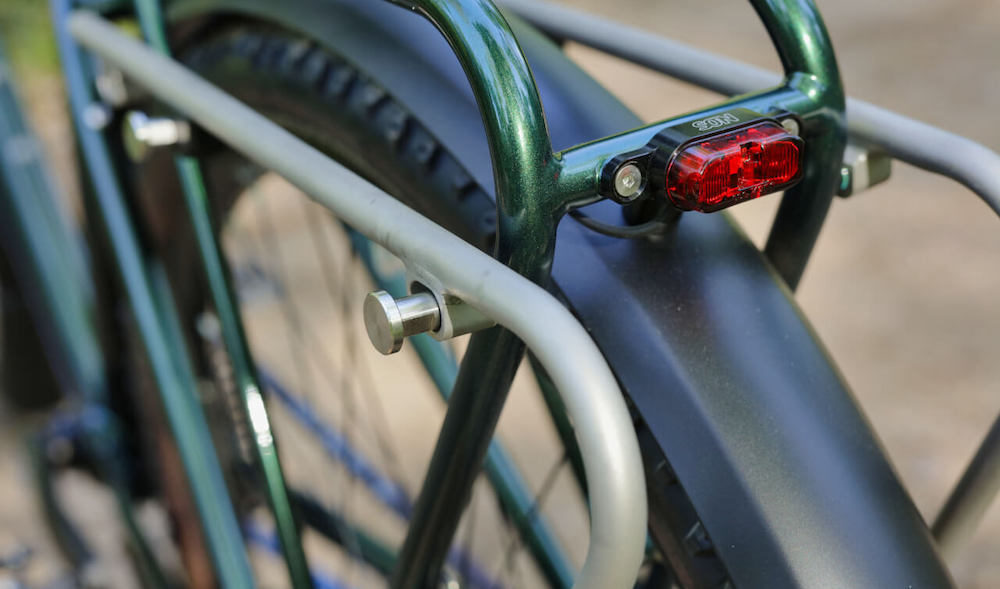 Up the back is an integrated stainless steel rack. As racks are one of the most likely components to fail on a bike trip, Tout Terrain wanted to make something indestructible, that has no bolts to work themselves loose on rough dirt roads.

New for 2021 is an extra rail system which allows you to lower the centre of mass of your luggage, resulting in better bike handling. The rails are made from corrosion-resistant stainless steel and have a sandblasted finish so that they doesn’t scuff over time.

This is the neat bit though, Tout Terrain is producing their own heavy-duty pannier system in partnership with Ortlieb. Usually, you need to adjust the pannier hooks and anchors to match the geometry of different racks, but this is not the case with the QL3 system. QL3 is no-compromise as the bag and rack have a perfect fit, making it more secure on rough roads, and quicker and easier to fit too.

It’s worth noting that regular panniers can still fit onto either the built-in rack or the EX rails. 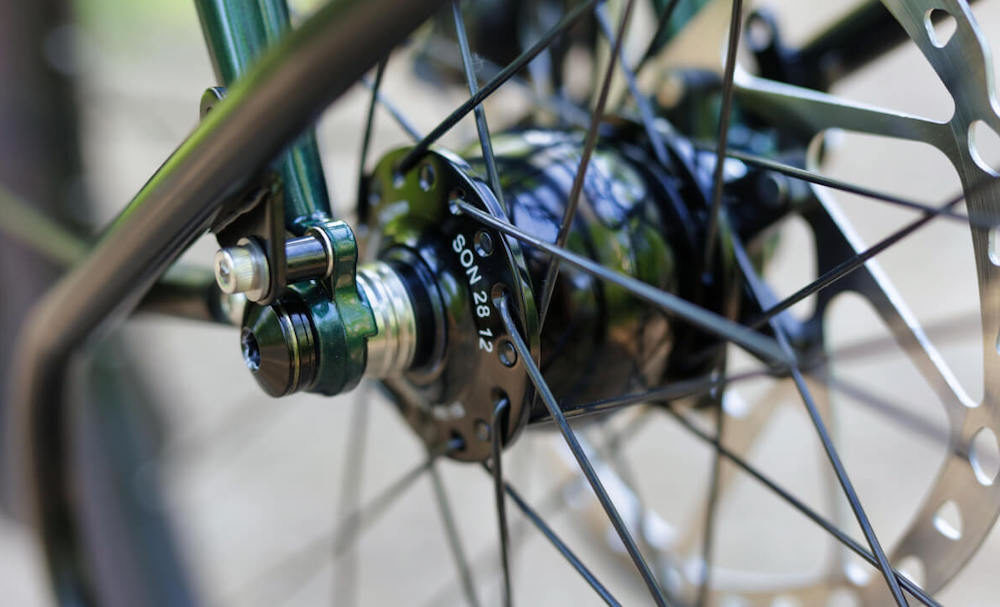 The Silkroad is using 12mm thru-axles front and rear to maximise stiffness and ensure your wheels are always perfectly aligned in the dropouts.

The fork not only has all the mounts you need for touring and bikepacking, but it has the fancy SL dynamo wiring built-in too. If you haven’t seen this system, it essentially eliminates the need to manually connect your dynamo cable spades to your hub. To send power to your system, the side of the dynamo hub just needs to touch the fork dropout – pretty neat, huh?

The power then runs up the inside of your fork leg, splitting between the dynamo lights and USB charger, and the rear light cable is fully-guided through the top tube and rear rack so that it doesn’t rattle inside the frame. 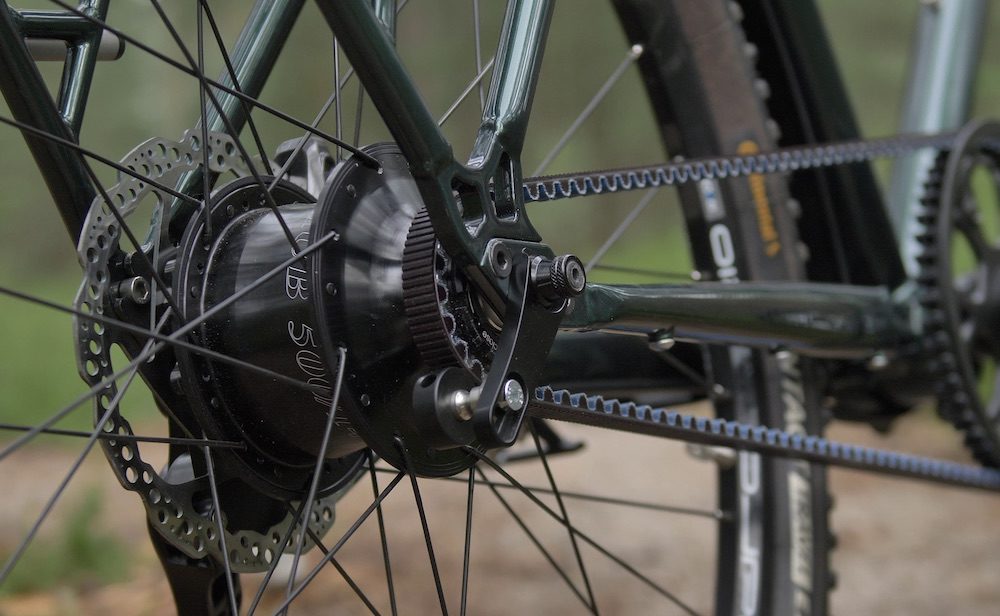 Tout Terrain has chosen a sealed oil bath, 14-speed Rohloff hub for this build. This rear hub offers the same gear range as many derailleur drivetrains, but instead of the components being exposed to mud, grit and water – they operate entirely inside the rear wheel.

Are they reliable? Absolutely.

I’ve been using Rohloff hubs for most of my journeys all over the world, and there is actually a Rohloff hub owner who has documented more than 380,000km on his.

The drive efficiency of a Rohloff hub is as good as it gets for a sealed gearbox system, but if you want the highest-performance drivetrain you can still spec this bike with derailleurs, which work out to be about 1-2% more efficient on average. But this assumes you fastidiously clean your chain and apply an efficient chain lube (I prefer Squirt) – when the conditions are bad I suspect a Rohloff works out to be the more efficient option.

The chain isn’t a chain at all – this bike is driven by a belt.

Belts are my personal preference for touring as they require no lubrication and very little maintenance – usually, just some water and a toothbrush is enough to keep you going. I’ve tested belts in the worst off-road conditions, and even still, I tour for about 30,000km before needing to replace anything, whereas my chain drivetrains usually don’t reach 10,000km in the equivalent conditions. 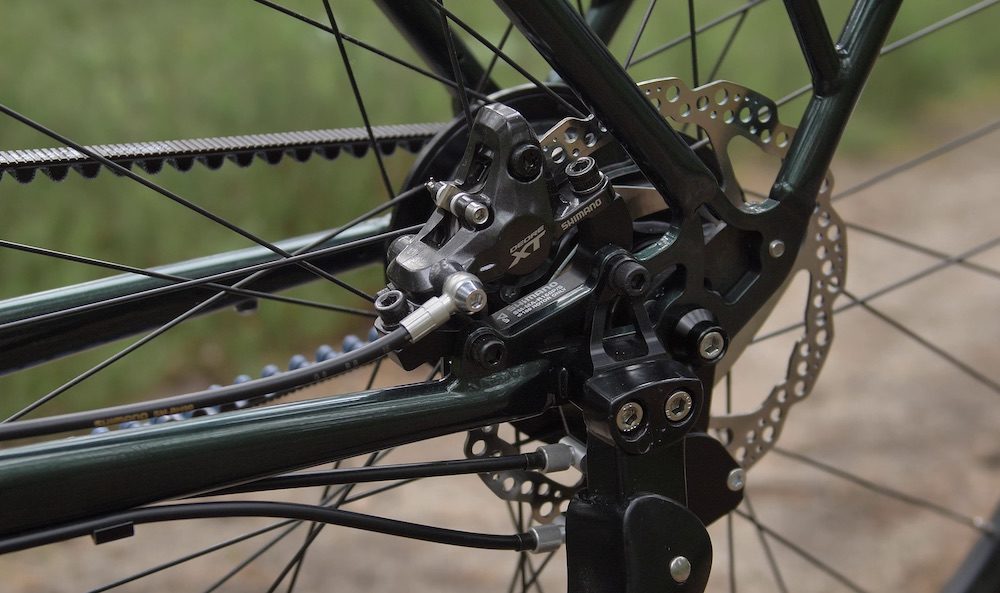 Despite what you may have heard, hydraulic disc brakes are often very reliable. I’ve personally been using XT brakes for the last decade, and have never experienced any leaks or damaged cables. I don’t do any maintenance on my brakes other than a yearly refresh of the fluid and occasional pad changes.

The Silkroad uses post-mount calipers as they will allow downhill mountain bike rotors right up to 203mm – which is is great news for heavier riders with bigger loads. The stock rotors are perfect for most riders in most conditions, however, it’s 180mm on the front and 160mm on the rear. 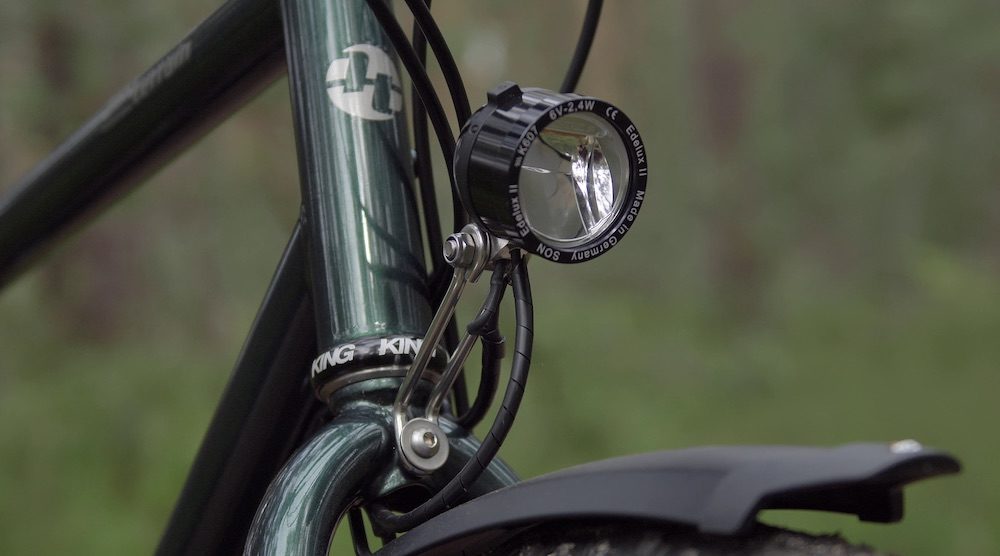 This bike is using Schmidt lights and a matching dynamo hub. The Schmidt hubs are undoubtedly the most reliable and efficient option that money can buy. Failures are rare and the level of drag you experience for the amount of power generated is a class above the rest.

The light’s tapered beam shape is one of the best for touring. It’s very well layered to give an even overall brightness, meaning the furthest away part of the beam is the brightest and the closest is the dimmest. Additionally, the beam has been designed so that it will not dazzle road users coming in the opposite direction. You’d think both of these characteristics are commonplace on bikes, but most bike lights are really just hand torches that connect to your handlebar.

This bike uses a Cinq Plug5 Plus USB charger, which integrates very neatly into your steerer tube, and is actually the most powerful charger at low speeds. A small ratcheting door above your stem reveals a USB-C plug where you can connect a phone, GPS or GoPro. It’s worth noting that a smartphone requires a minimum speed of about 12kph to create a good charge, but other devices like a GPS will charge at about 7kph.

And when your speed drops below the minimum for your device (for example, when stopping at traffic lights), a battery inside the steerer will provide backup power to make sure that you don’t lose your charge. It will then fill itself up again when you’re moving. 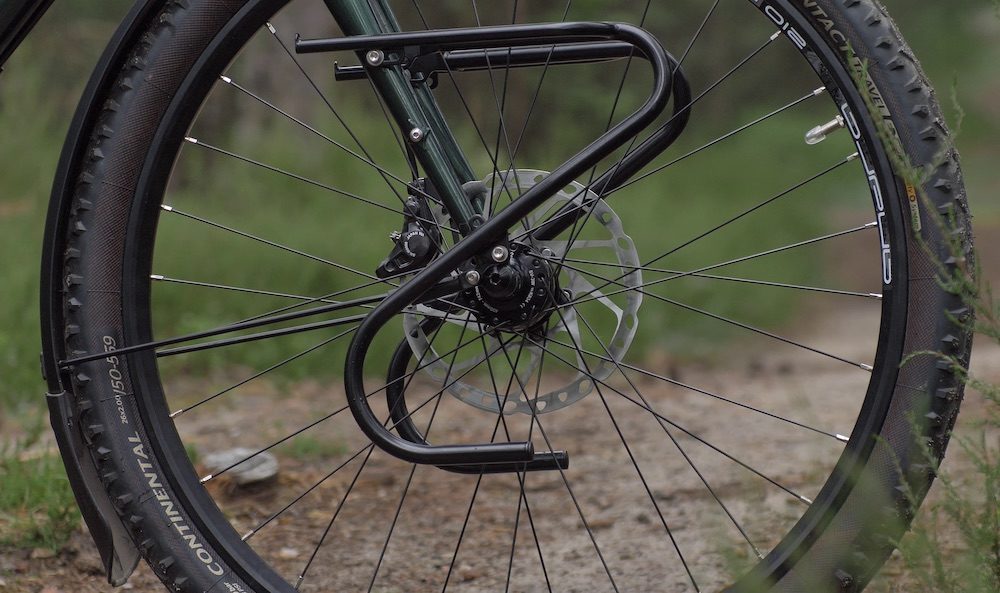 Along with your racks, the rims and spokes are the most likely components to fail on a loaded bike. Ideally, we want super stiff rims, because rims that flex a lot under load put additional strain on your spokes – causing them to eventually break. The Ryde Andra rims may be heavy, but they are the gold standard for stiffness, which allows people like me to ride bikes on very rough terrain carrying huge amounts of gear with practically no spoke failures.

Rims often fail from cracks at the spoke holes too. You just need to see the cross-section of an Andra rim next to a typical rim to understand why they rarely suffer this fate.

On the Silkroad, you can choose between 26″ and 27.5″ wheels. I recommend 27.5″ as some tyre manufacturers have already dropped 26″ versions of their touring tyres, and in bigger cities, you’ll always find higher-quality 27.5″ mountain bike tyres to keep you going.

The maximum tyre size is limited to 2.1″, which is narrower than the 2.5″ clearance offered by most modern expedition touring bikes. Wide slicks are a very fast-growing tyre category, driven mostly by electric bike sales, so I think this would’ve made the bike that bit more versatile. But Tout Terrain offers other bike models with more tyre clearance for off-road if that’s what you want.

Elsewhere, the bike is fitted with Tout Terrain’s in-house “Black Label” components – that’s the handlebar, stem, seatpost, pedals and grips. The saddle of choice is a Selle Royal model from the popular Scientia range. This is a gel saddle with a shape that is derived from pressure mapping the backsides of different riders, and it has extra flex built into the rails to provide the smoothest possible ride. 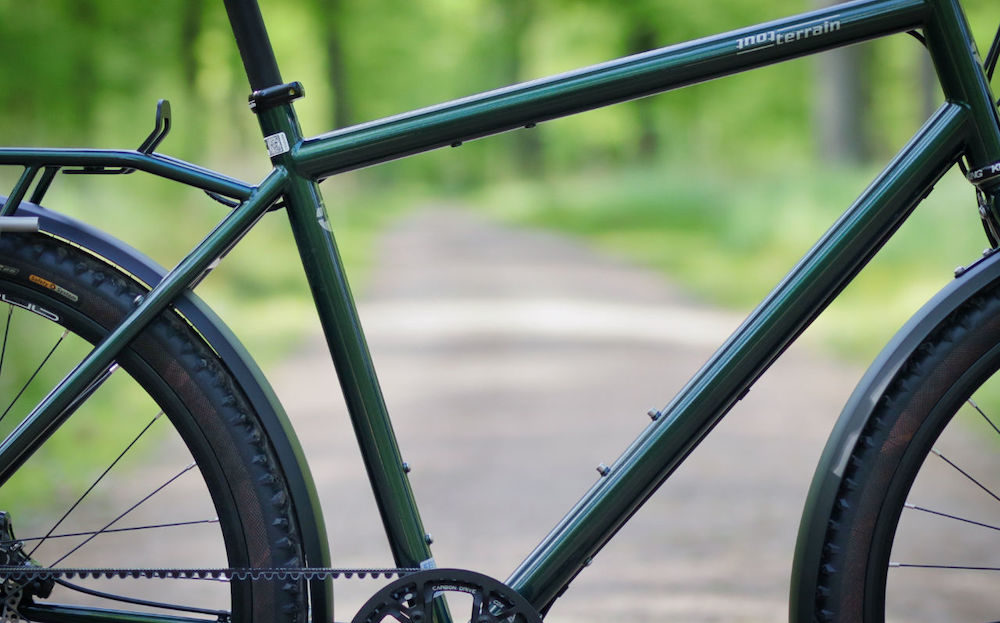 Usually, a frameset of this calibre is simply not available to purchase by itself, and forks with SL dropouts feature almost exclusively on very custom bikes. But if you want to spec your own Silkroad, you can buy the frameset alone for €1700.

The bike as you’ve seen it today with all of the optional extras fitted will set you back €5529.

If You Need Help Choosing A Gearbox For Your Silkroad, Click HERE.