In this resource, we’ll take a look at the best offline GPS apps for navigation on a smartphone. I can almost guarantee the list here will have you covered for all your mapping needs. App features in 2018 include routing, tracking, elevation profiles, turn-by-turn voice prompting, GPX importing, map layering, route drawing, live tracking, Wikipedia entries, hotel booking and the ability to select different types of maps depending on where you’re riding. With functionality like that, it’s clear that smartphones make really powerful GPS systems.

The thing these apps all have in common is that you can download the mapping information and use it without internet access. That’s right, you won’t need wifi or a sim card. Just ride, map and navigate.

For more on navigating with a smartphone, check out:

GPS Navigation: How To Go Bicycle Touring with a Smartphone
The Best Bike Smartphone Cases & Mounts for Cycling

This relatively new app seems to offer everything! To create a route, you can trace with your finger and snap it to the road network. There are interactive elevation profiles, downloadable map tiles, topo/terrain maps, GPX/KML importing and 3D tilt to see the topography of the region. For everything other than services (restaurant, hotel etc), this is as it gets for bicycle touring! Head HERE to read my usage guide. 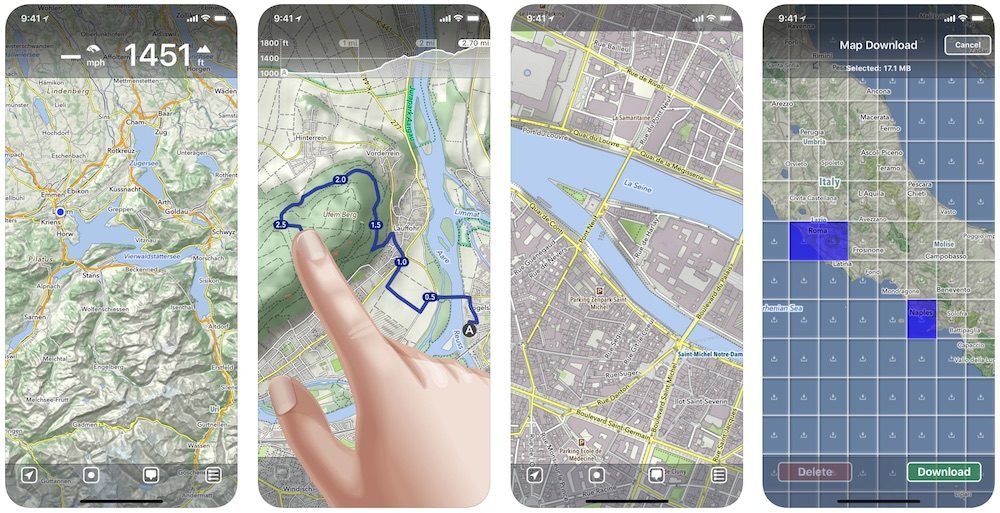 One of the most powerful offline mapping apps for iOS has recently had a big update. There’s now millions of POIs, ability to record routes and navigate offline. With this app, you can also upload your own custom maps in a number of formats for easy navigation. 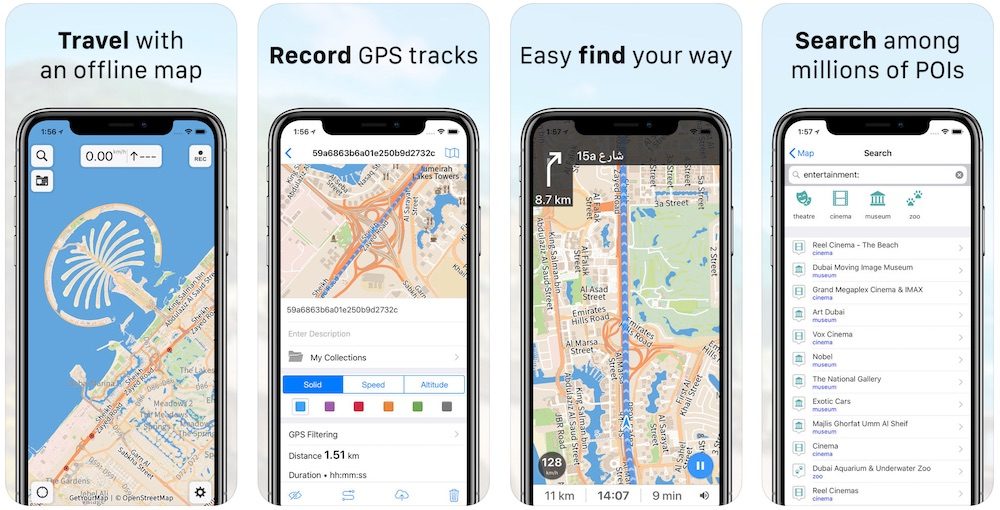 Locus is the highest-rated navigation app for Android users. It has access to huge quantities of different maps (inc. terrain, cycling, hiking, skiing), either while you use data, or as in-app purchases for offline use. You can import custom maps, enjoy turn-by-turn voice navigation or understand places with the incorporated Wikipedia information. This app is really powerful! 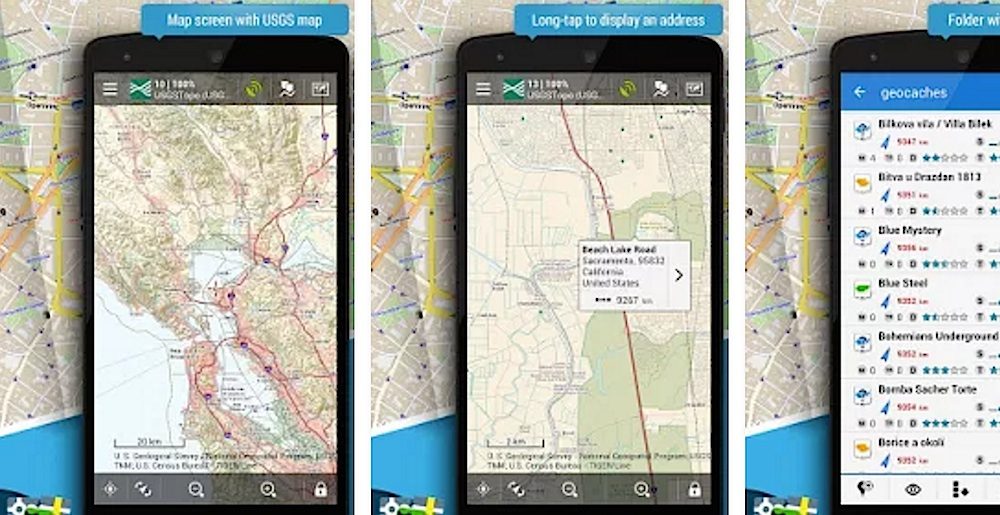 Orux is generally considered the best Android mapping app because it is free and has an incredible raft of features. It will take you some time to familiarise yourself with these features because the user interface isn’t exactly polished, but essentially you can upload all kinds of maps and tiles including GPX, routing, have different user profiles and even track your route (live tracking with an internet connection). 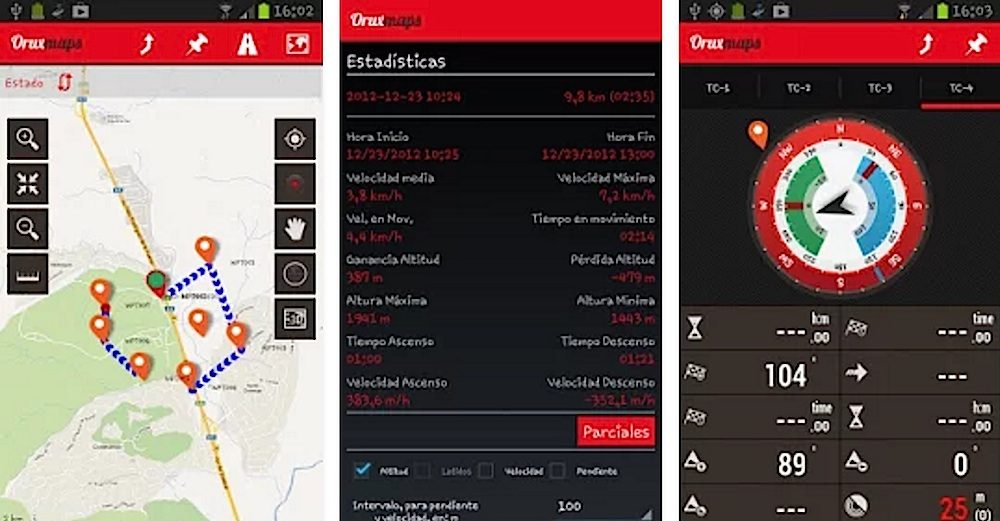 This backcountry app allows you to create, display and save an unlimited number of waypoints, routes, areas and tracks. You can set up multiple maps in layers, with per-map opacity control. You’ll also have access to many map formats including Nokia maps, Yahoo maps, local topo maps etc. 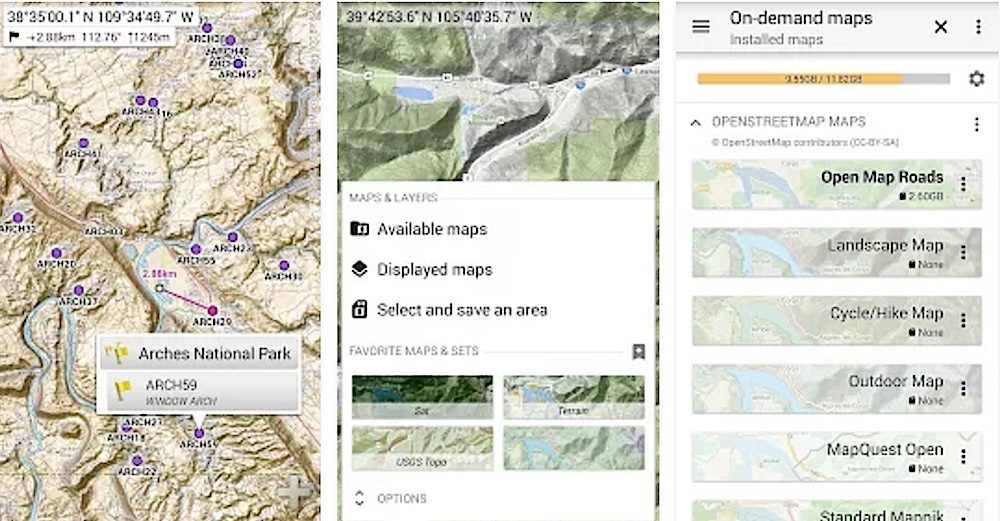 Easily the most elegant and up-to-date of all smartphone maps, however, they are best used with data. It’s possible to save the Google Maps in the cache (to view it offline). While you have an internet connection, zoom in on a part of a map that you want to save. Type “OK Maps” (minus the quotes) and hit Search and you can save highly detailed maps out at 15km if you need.  Google Maps also allows you to view larger regions offline, by caching any areas you view; just remember to zoom into any areas you’ll need to view in more detail later. The turn-by-turn directions even work offline if you search for them while you’re connected to wifi and continue travelling without.

For a couple of dollars, you can download maps for all countries in the world which are stored on your device. The map data is provided by OpenStreetMap which is a collaborative open source database with information provided by hundreds and thousands of people. This app has inbuilt Wikipedia and WikiTravel information which can be found at landmarks on the maps.

Maps.Me isn’t as powerful as other apps, or as beautiful as Google Maps, but the user interface is great and it packs in a lot of searchable travel information on restaurants, hotels, campgrounds, hospitals, police stations etc. The map data is provided by OpenStreetMap (OSM) which is a collaborative open source database with information provided by hundreds and thousands of people. It’s easy to get maps, simply download the countries you need in the app (usually 5-500mb per country) when you have a good internet connection. Using the cycling navigation option, you will even find elevation profiles. Here’s a resource on how to import a custom KML route into the app.

Komoot uses one of the most impressive map data sets I’ve used for routing – I don’t think there is a better app for planning a route. You can choose various types of road surface to match the capabilities of your bike. The app will even show you the distance break-down of each surface. The turn-by-turn voice navigation is perfect. The biggest downside is that the offline maps take up a LOT of storage space. Even if you decide not to use this app, you can plan your routes on a computer and export them to other apps HERE.

This is another top iOS app for a backcountry use. Download the maps within the app and enjoy travelling on back roads and hiking trails with detailed topo maps. Super easy to plan, track and store your exploits.

This top-selling backcountry app has OpenStreetMap and OpenCycleMap information available for download, so it’s not just good off the beaten path. It’s also super easy to import GPX/KML information / GPS coordinate information – here’s a great guide to using it. 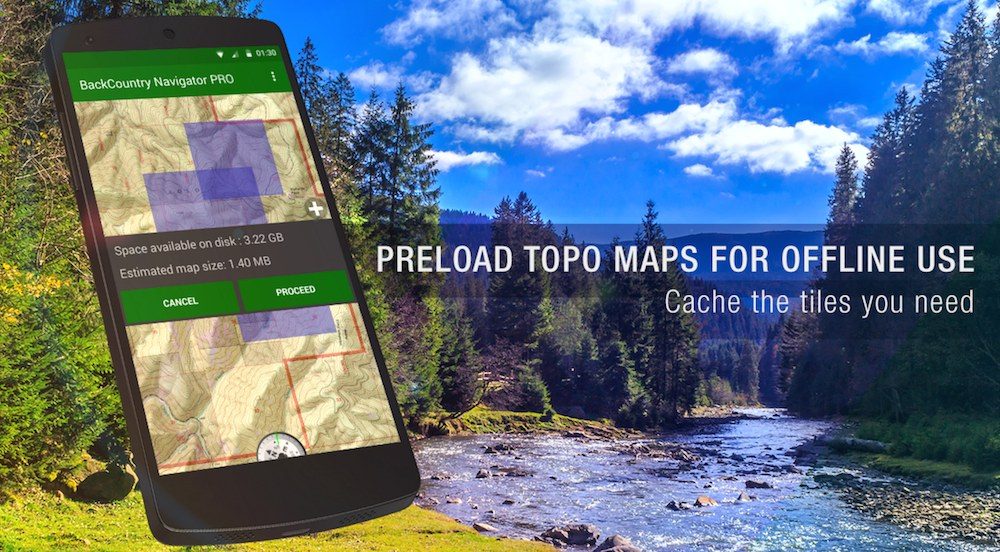 Sygic is the world’s most downloaded offline navigation app. It employs high-quality car based maps from TomTom and other providers which are stored on your smartphone allowing you to navigate without an internet connection. The navigation is voice-guided, provides alternative routes and drag and drop routing. The app is free, but you will have to purchase the maps (you can even download the world maps for 111 countries for $30).

This highly rated and powerful iOS app allows you to import and export GPX files, download maps (cities, regions, countries) for offline use, route, turn-by-turn navigate and track your trip. It incorporates 500,000 Wikipedia entries which are incredibly useful for finding points of interest while travelling.

This backcountry focused app is highly rated by bike tourers who spend time off the beaten track. With Gaia, you have access to a whole raft of worldwide mapping layers. These topographic, road or aerial ’tiles’ can be downloaded to different levels of detail, resulting in different file sizes. If you’re a ‘pro’ user you’ll be able to layer multiple maps at once. You can of course import/export your own GPX/KML files by web browser, DropBox and email. The app isn’t as cheap as other options (US $20) but once you’ve invested, all map downloads are free within the app.

These downloadable world topo maps (100k-500k) are former Soviet military (mostly from 1980’s), and for many countries in Africa and Asia are still the best topo maps available! 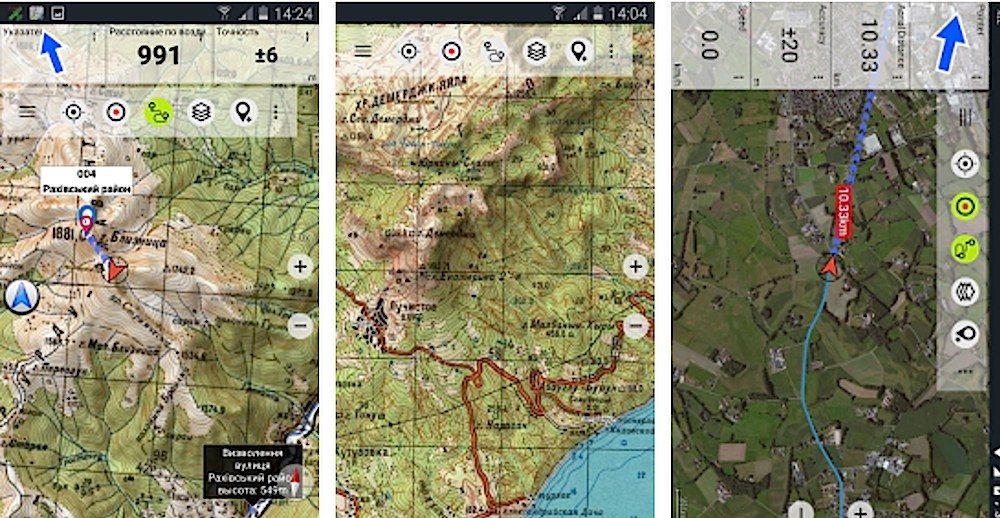 As the name suggests, this app has access to OpenStreetMap data which can be downloaded to your phone through the app for offline use. If you don’t want to store maps, you can also use mobile data to access maps. A great feature of this app is the cycling and walking routes. This app includes navigation features such as voice guidance and re-routing. You can also search for addresses and find GPS coordinates. 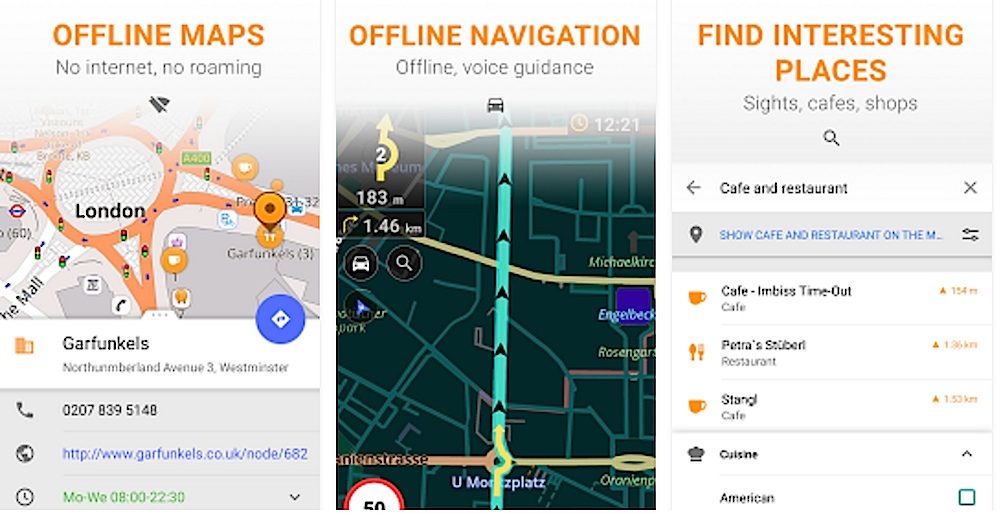 This app is free and has lots of offline maps available. For iOS users, this is one of the better apps for offline searching and routing. You’ll need to purchase features such as turn-by-turn and voice navigation for a modest amount.

Ride With GPS is more of a cycle computer that has inbuilt navigation and live tracking. It even supports Bluetooth accessories for adding heart rate, cadence and speed data. There is seamless GPX importing from the Ride With GPS website but you will have to pre-download the individual map tiles. 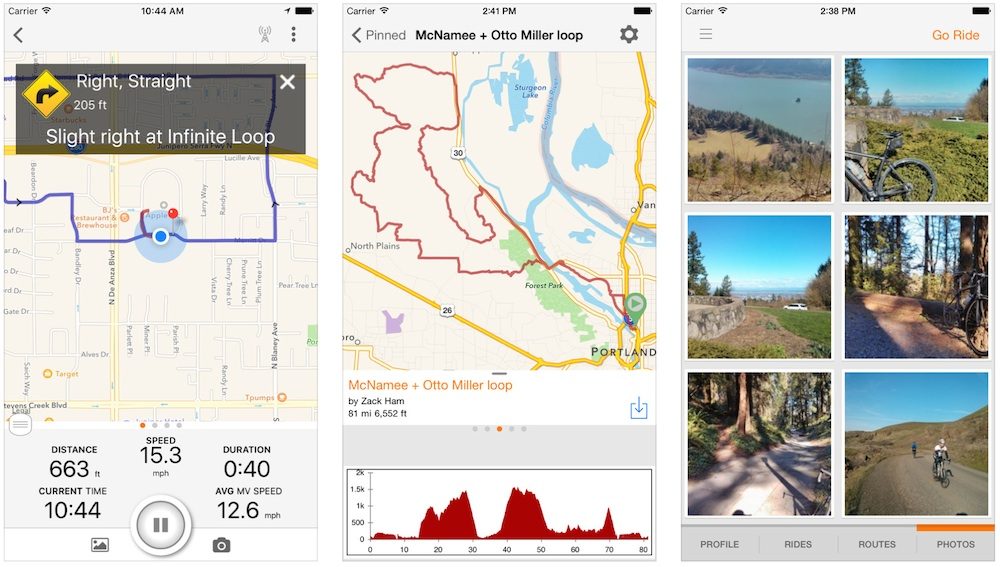 The HERE maps are going from strength to strength currently. The mapping interface is really simple, clean and easy to use. HERE features GPS turn-by-turn navigation with elevation profiling and the elevation gained/lost. There are lots of waypoints available from restaurants to Wikipedia entries. You can download entire continents if you have the storage, or alternatively download each country. The best bit? It’s free!

Take A Look At…

GPS Navigation: How To GO Bike Touring with a Smartphone
The Best Bike Smartphone Cases & Mounts for Cycling

BikeRoll Is The Easiest To Use Online Bike Route Planner

Is MapOut The Best Smartphone Mapping App For Route Drawing and Elevation?