The best value touring bike in the world just got even cheaper. The 2017 Fuji Touring is one of my 8 favourite touring bikes because it offers low touring gear ratios, simple parts and strong wheels – all for US $749. The beauty of this bike is that it essentially provides the most touring features for the lowest cost!

Fuji Bicycles started out in 1899, and have included touring bikes in their range since the 1980s. Fuji really picked up their game about five years ago, offering a steel touring bike with barend shifters, a wide-range crankset, a threadless headset, mini-v brakes and a solid rear rack for a low cost.

The geometry of the Fuji isn’t perfect – it has slightly shorter chainstays, as well as quicker steering than comparable long-distance touring bikes. But despite these small quirks, you’ll find it will comfortably handle a heavy front and rear load.

In terms of part changes from last year, the big news is a switch to Vittoria Randonneur tyres – a very well proven touring option in terms of longevity and puncture resistance. 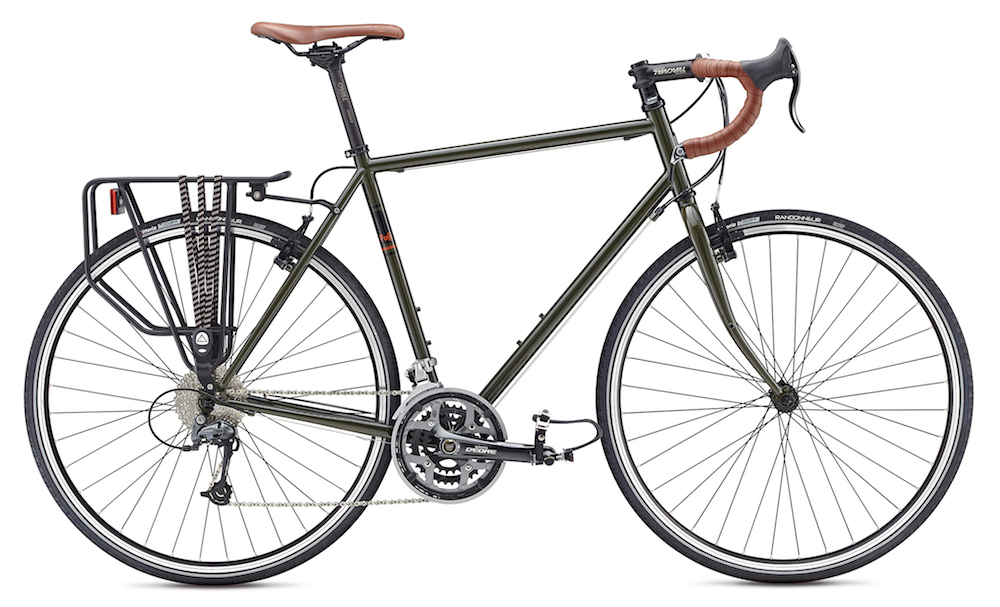 The 2017 Fuji Touring bike is one of the best value touring bikes.

The 2017 Fuji Touring is spec’d with lots of solid components including a Shimano MTB crankset and 9-speed Shimano MTB derailleurs. The resulting gear ratios (21-119 gear inchs) are suitable for most road gradients with your panniers filled to the brim.

While mini v-brakes aren’t my first choice on a touring bike, they are the best brake option on a bike at this price point. The only other limitation is the maximum tyre width of 38mm. Many other touring bikes are capable of 45mm+ for additional comfort and grip on dirt roads.