If you’ve ever shopped around for a touring bike in AUS/CAN/UK/USA/NZ, you’ll know how hard it is to find anything but touring bikes with drop handlebars. The interesting thing is that it’s literally the opposite in European countries – Europeans love flatbars, and so do I! This article will be taking an in-depth look at the best touring bicycles with flat handlebars.

The main downside to flat handlebars is that they put your body in a less aerodynamic position, but with the alternative handlebar shapes available these days, this really is a non-issue if you’re trying to optimise your speed (check out my Velo Orange Crazy Bars).

I’ve selected the following bikes as the best examples of modern flat bar touring bikes. You’ll notice these bikes have quite a mix of frame materials (aluminium and steel) and brake types (hydro disc, cable disc and hydro rim).

But what these bikes have in common is:
– A wide gear range, including low enough gears to get you up most mountains.
– The ability to fit 2.0″ tyres which I find to be comfortable, grippy and capable on dirt roads without being too slow on the road.
– Many come with dynamo hubs/lights and the ability to easily connect up a USB charger to harvest power while you ride.
– Most have kickstands or the ability to easily mount one (I’m a recent convert). 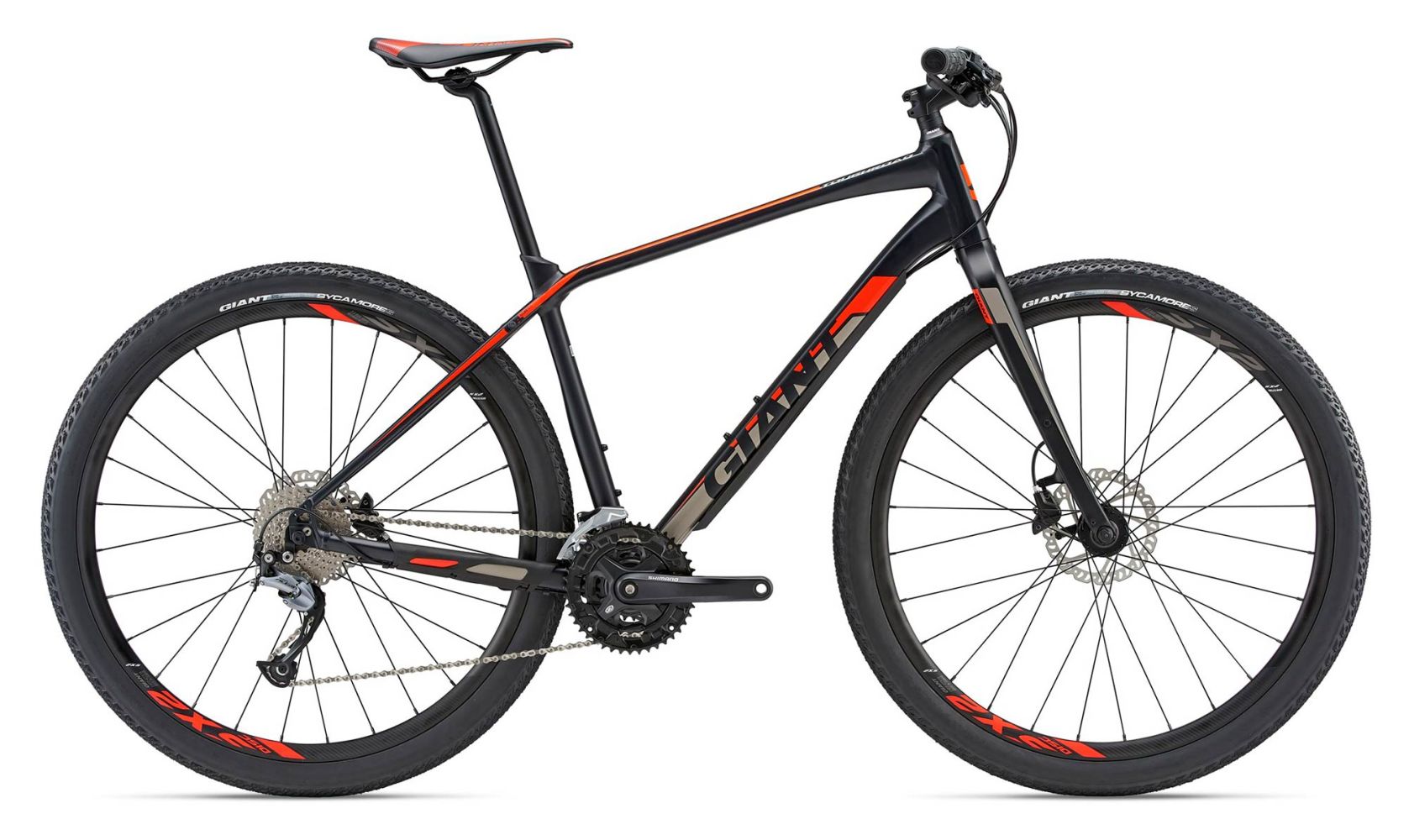 The Giant Toughroad aluminium touring bike is begging for a set of wide slick tyres to turn it into a long-distance touring machine. As Giant is the largest bicycle manufacturer in the world, the Toughroad is priced super competitively for what you get – the carbon fork is a nice touch! The low gear of 19 gear inches is lower than most bikes in this list and will permit a climbing speed of 5.4km/h with a decent pedalling cadence. A relatively slow steering speed provides ample stability, especially on looser surfaces. You’ll find the Toughroad available in five sizes.

You can read more about the Giant Toughroad HERE. 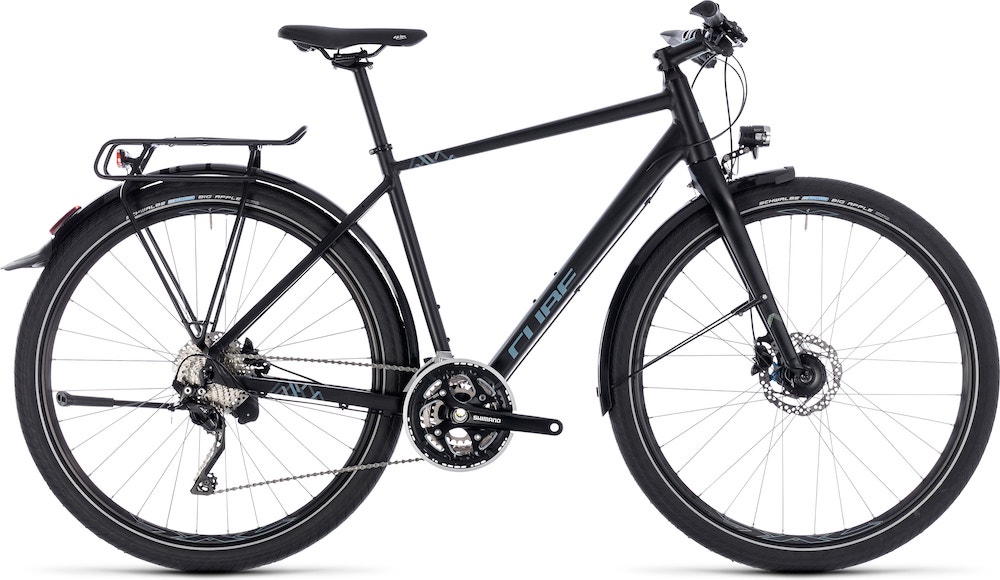 This aluminium touring bike offers incredible bang for your buck! With fenders, it even has a very generous 29×2.25″ tyre clearance. The gear range is 21-121″ which tends to suit most touring terrain, that said, by fitting an 11-36t cassette you’ll drop the low gear to about 20 gear inches. The fitted dynamo lights, fenders and a rear-mounted kickstand make this bike ready to tour from the shop floor. The only downside to the bike is the lack of upper mounts for the rear rack. While the hidden mounts look great, they generally don’t last the distance long-term. For a big bike trip, I’d recommend fitting up a Salsa Rack-Lock seat clamp and Tubus Logo rack. The Travel EXC comes in five sizes, plus three sizes with a step-through frame design. 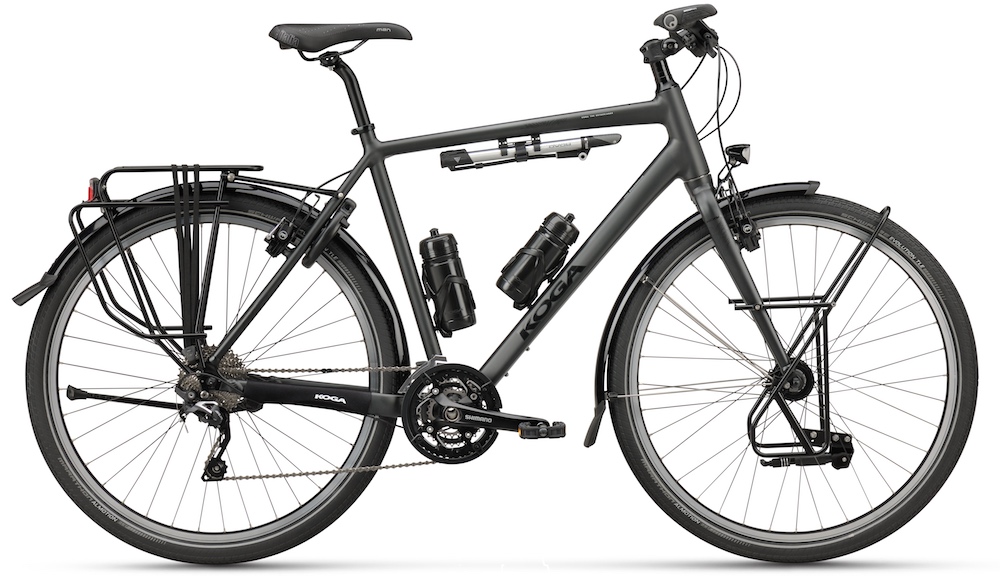 Despite its relatively high sticker price, I had to include the WorldTraveller because I’ve been super happy with mine on my 40,000km ride from Argentina to Alaska. The Koga triple-butted aluminium frames are the stiffest I’ve ridden, and they have a frame geometry that handles exceptionally across all terrain thanks to the relatively slow steering and long wheelbase. You’ll find the 20-116″ gear range will tackle most climbs, but a switch to an 11-36t cassette will get you a lower gear again (19 gear inches). This bike is priced a bit higher than most partly because it comes with many accessories fitted, including Tubus racks, dynamo lights, bottle cages, a rear-mounted kickstand and even the awesome Topeak Road Morph pump! Given the advancements in disc brake technology, I’m not the biggest fan of hydraulic rim brakes, but this can be overlooked for the quality and specification of the bike. The WorldTraveller is one of the only bikes available as a step-through frame across the full size range too, which gives you the option to make it easier to get on and off with panniers. 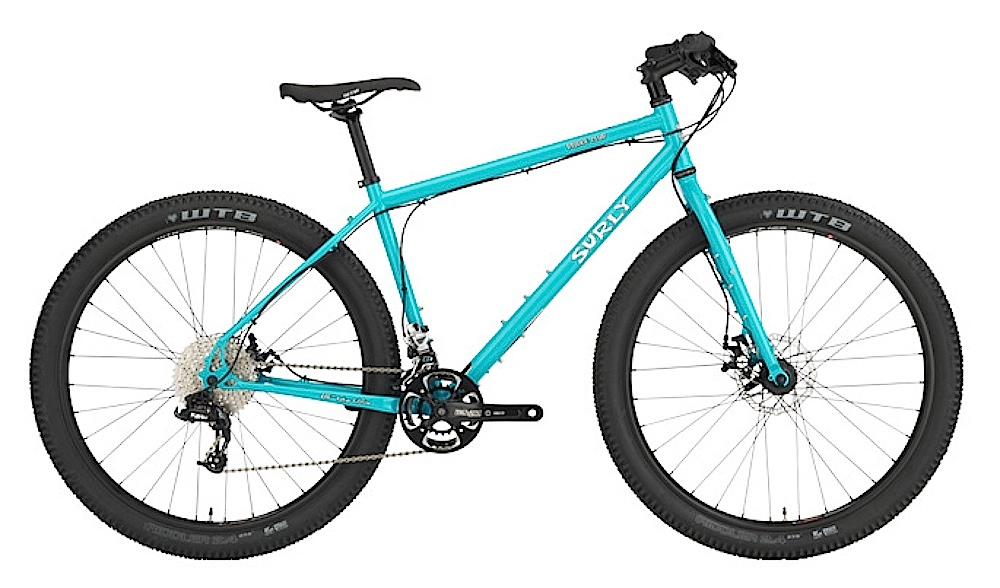 This recently released off-road steel touring bike has all of the frame features of a long-distance touring bike and is significantly cheaper than the Troll and Ogre models. The gear ratios of the 2×10 SRAM drivetrain are ideal for off-road terrain and are lower than almost any other touring bike available. The low gear of 17 gear inches translates to a climbing speed of 4.9km/h (3MPH) while maintaining a pedal cadence of 60RPM. This is about as low as practical and will probably allow you to optimise your cadence even on 15%+ gradients. You’ll also find the slow steering speed exceptionally stable on the rougher terrain. Fender mounts, rack mounts and multiple 3-boss cargo cage mounts give you flexibility for luggage types. For smoother road surfaces you can switch the 27.5×2.4″ knobby tyres for some Schwalbe Super Moto-X 2.4″ or Schwalbe Almotion 2.0″ slick tyres (these tyres will even drop the bottom bracket height by 10mm for more bike stability). The cable disc brakes on this bike are generally better for bike trips in more remote locations as they’re easier to maintain than the hydraulic options. The Bridge Club is available in five sizes.

You can read more about the Surly Bridge Club HERE. 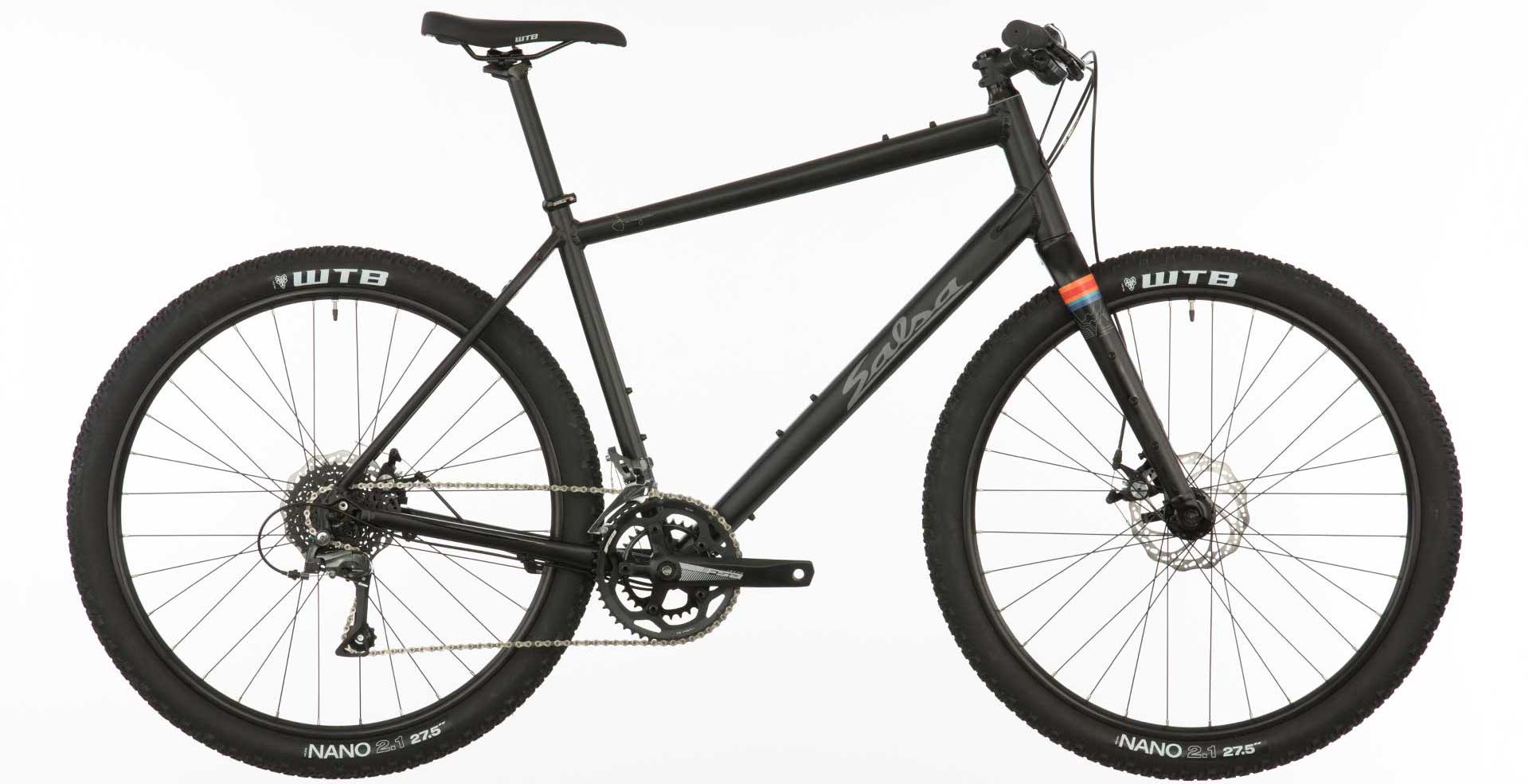 The aluminium Salsa Journeyman is a great buy, but it requires a few modifications to match other bikes on this list. While the gear ratios as standard don’t quite cut it for touring in the hills, you can fit a Shimano Tourney 8-speed crankset (42-34-24t), front derailleur and shifter (US $60 total) to this bike to achieve a sub-20″ gear (capable of 5.5km/h at a decent cadence). For smoother road surfaces I recommend fitting Schwalbe Almotion 2.0″ tyres to reduce the rolling resistance significantly. The top tube bag mount and 3-boss mounts on the fork are a nice touch for alternative luggage options. You’ll find the geometry is also really decent for touring; the relatively slow steering speed helps to make this bike nice and stable. You can get the Journeyman Flatbar in five sizes.

You can read more about the Salsa Journeyman HERE. 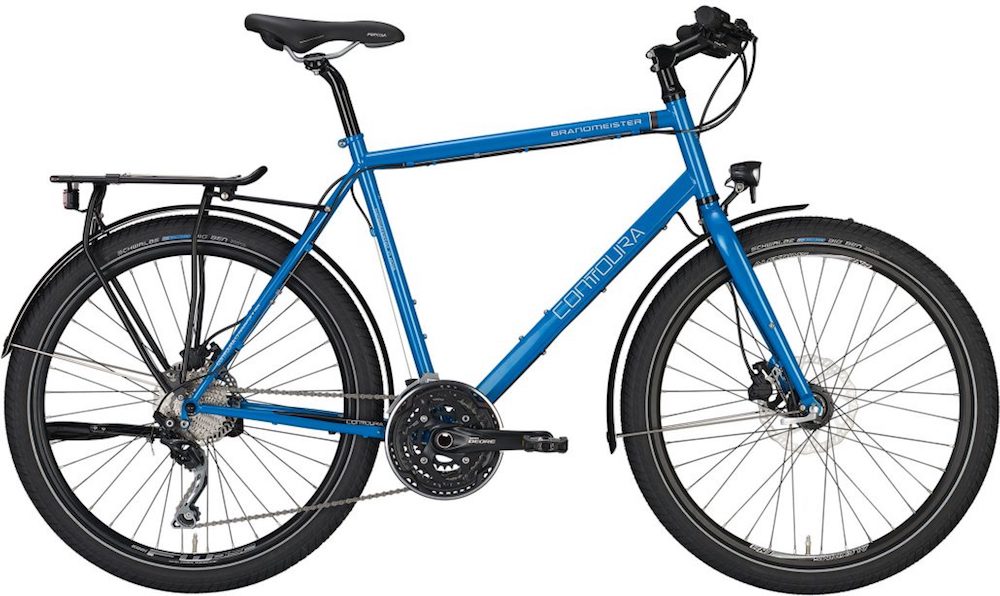 Contoura bikes are made by German bike wholesale company Hartje. The steel Brandmeister Tour is the pick of the bunch for bike travel as it can fit some wide 26×2.2″ tyres with fenders mounted. The 30-speed Shimano Deore gearing provides a gear range of 21-113″ but with an 11-36t cassette swapped in, you could drop the low gear to under 19 gear inches. This bike comes with dynamo lights, a Pletcher kickstand and a rear rack as standard. The biggest downside to the Brandmeister is that it’s only available in three sizes, so it may not fit all riders. 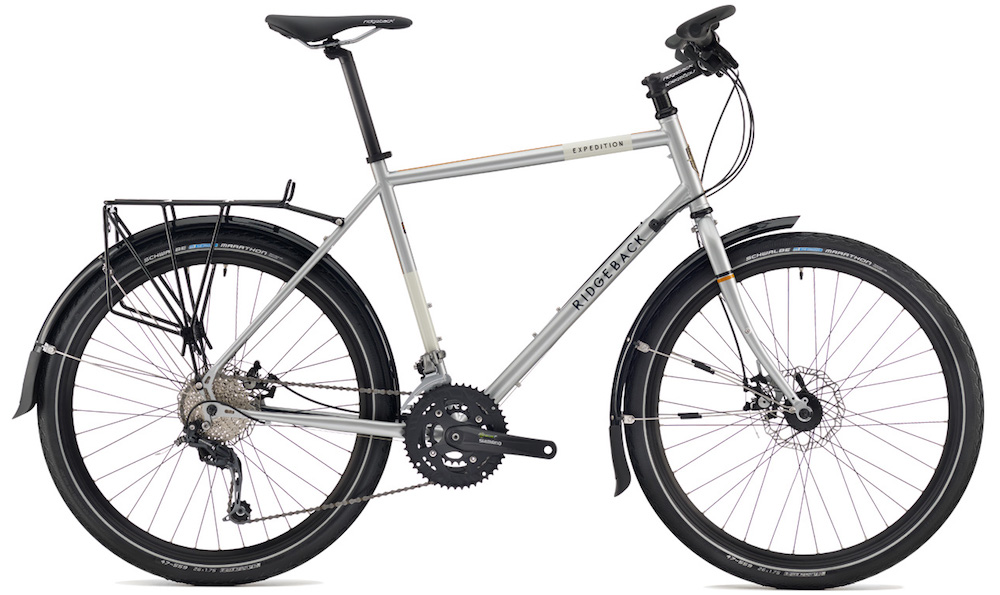 The steel Ridgeback Expedition has improved a lot in recent years. It’s very well suited to long-distance touring because it fits some wide 26″ touring tyres and fenders, it has low maintenance cable disc brakes and a 27-speed drivetrain (9-speed parts are typically easier to find in developing countries). The 19 gear inch low gear is decent enough for steep terrain and heavy loads. You’ll find the Expedition available in five sizes. 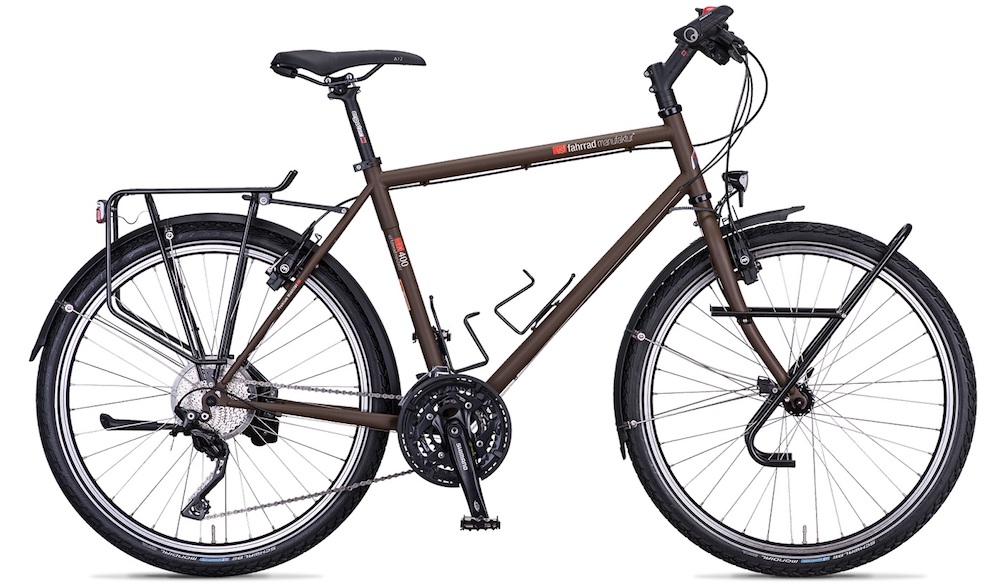 VSF Fahrradmanufaktur offers incredible value touring bikes, and the steel TX-400 is no exception. The bike comes stock with Tubus racks, fenders, dynamo lights (plus an SP hub) and a rear mounted kickstand. The low gear of 20″ can be reduced to under 19″ with the fitment of an 11-36t cassette. The main downside to this bike is that it’s only available in three sizes (two sizes are available as step-through) so it may not suit all rider heights. 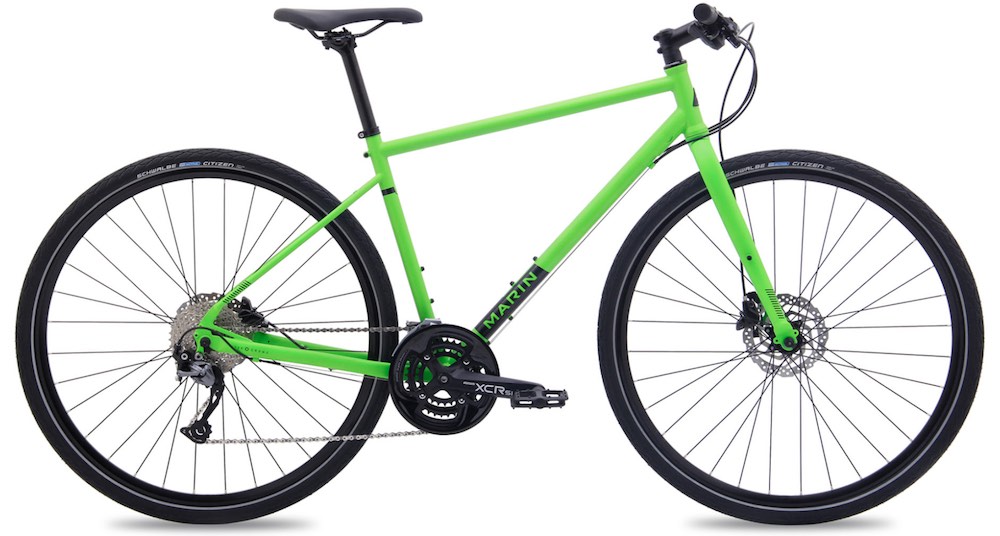 This is technically not a touring bike (it is more a commuter bike) but given the Muirwoods’ frame geometry, gearing and eyelet mounts (fenders, racks, 3x bottle cages) – it would make a great budget steel travel bike. The frame fits 2.0″ tyres without fenders and the 27-speed Shimano Acera gearing provides a decent 21-116″ gear range for most riding conditions. You’ll find the Marin Muirwoods in five sizes. 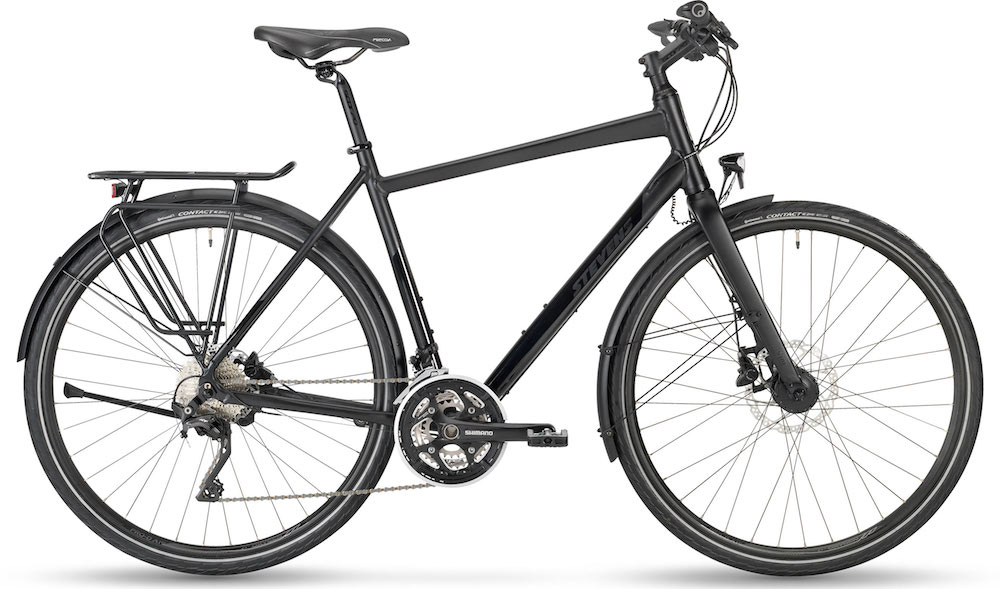 The aluminium Stevens Randonneur makes a pretty decent flat bar touring bike. The long wheelbase and slow steering speed contribute to a feeling of stability with panniers. The gear range is good (21-122″) and the bike offers many accessories (dynamo lights, kickstand and rear rack) as standard. Like the Cube Travel EXC above, I’d recommend fitting up a Salsa Rack-Lock seat clamp if you’re going on a long bike trip. The Randonneur Disc is available in six sizes plus four sizes in the step-through style and will fit 2.0″ tyres without fenders. 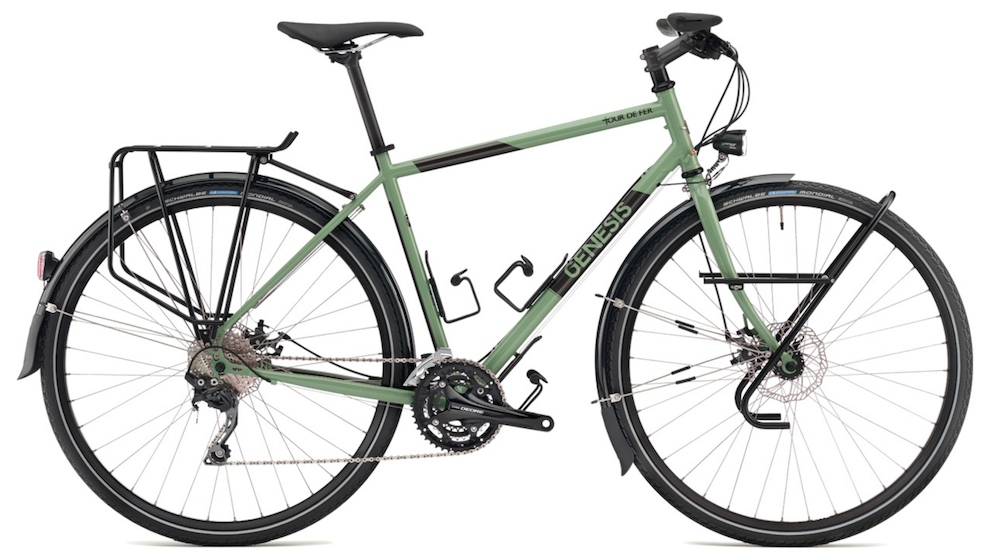 The Tour de Fer 20 is a full-optioned steel touring bike with Tubus steel racks, cable disc brakes, fenders, dynamo lights and a nice wide gear range (19-109″). There are three bidon cages to carry all the water you need plus fuel. While the bike doesn’t come with a kickstand, there is a centre-mount kickstand plate behind the crankset. You’ll find the Tour de Fer in four sizes and it will fit 2.0″ tyres without fenders.

You can read more about the Genesis Tour de Fer HERE. 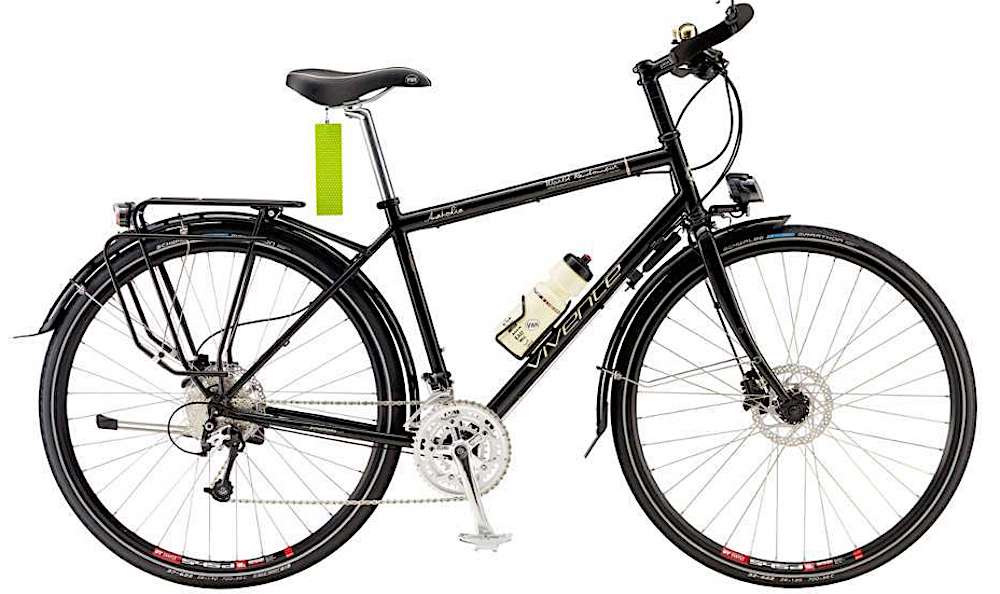 You probably haven’t heard of Vivente. They’re a small company from Australia making steel touring bikes with all of the small details. The Anatolia comes stock with a Tubus rear rack, a KSA-18 kickstand, a steering stabilizer and an AXA dynamo light with USB charging capabilities(!). The lowest gear is 21 gear inches as stock, but you can fit a 12-36t cassette to drop that right down to 18 gear inches (5km/h @ 60RPM)! The frame will fit 29×2.0″ tyres without fenders, and these bikes come in six sizes – the XS (26″), S and M come in a step-through version. Vivente will air freight their bikes globally for AU $200 (and minus the local taxes, so it’s actually cheaper than buying locally). 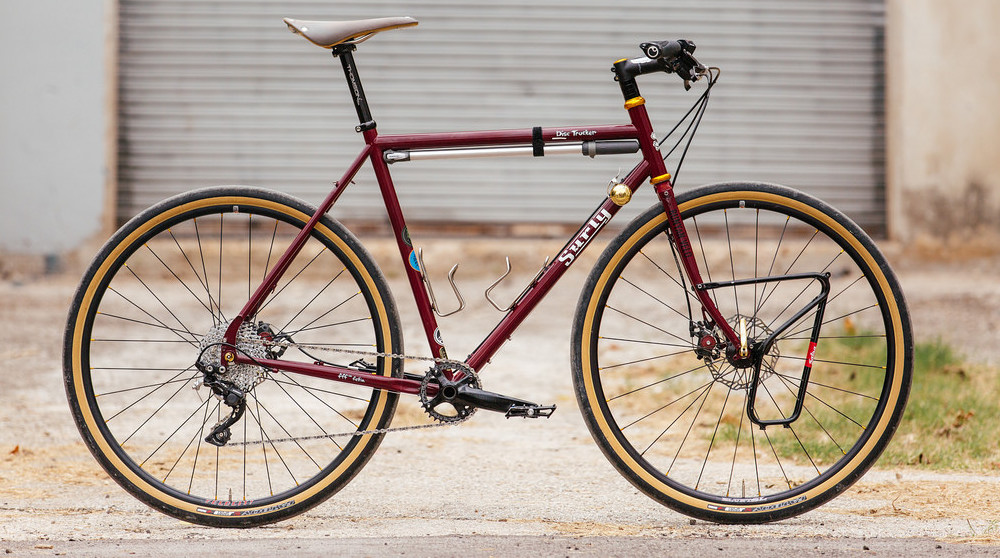 If the above bikes don’t appeal to you, a flat bar conversion to a drop bar touring bike is not out of the question. The thing is that flat handlebar frames are typically longer for each given size due to the shorter reach to the controls (brakes and gears). That generally means it’s best to go up a frame size when doing these conversions (check you can stand over the top tube though). Otherwise, the result will be a shorter and more upright position on the bike, which you might prefer in any case!